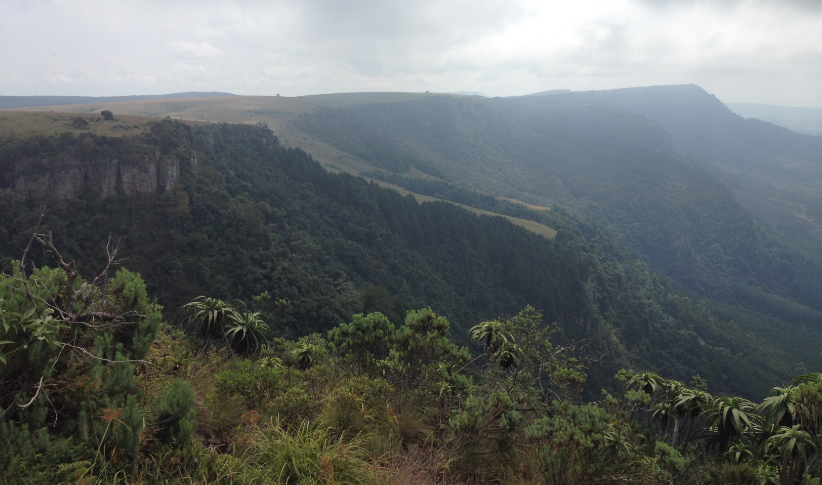 After a long hiatus, I heard it again on the Florence Hill Trail at Kaapschehoop last weekend: blister juice as the punctured blister squirted its clear liquid in all directions. Every sport has its own unique vernacular. Often this argot is used regionally whereas often it applies only to a coterie of friends. So it is with the Quo Vadis Hiking Club. This blog covers the transformation of Quo Vadis over a 25 year period from the first blush of innocent youth to a club of geriaterics.

In our youth – when I was 40 years old – a lot was left unstated. Instead it was the competitive male spirit which generated the signals and subtle unobtrusive signs. The six day 120 km Amatola Hike in 1989 epitomised that unspoken communication. Unfortunately Kurt was at the peak of his Comrades and Iron Man prowess while Mike Brown was not a laggard in the running stakes either. Having recently completed a marathon in Edinburgh, Scotland in a whisker over three hours, he certainly was no slough.

Main picture: Looking back to Kaapsehoop

On day 6, the challenge spontaneously erupted. With the towering Hogsback Peak ahead of us, the friendly rivalry between Mike and Kurt burst into a full scale challenge. Not a spoken word was uttered, not a signal given but both understood that the gauntlet had to be discarded. It was do or die, neither would capitulate and I would be the unwitting laggard. I clung to their heels the whole way impervious to howls of pain from my whole body. At one kay to go, I conceded defeat and slackened my pace. 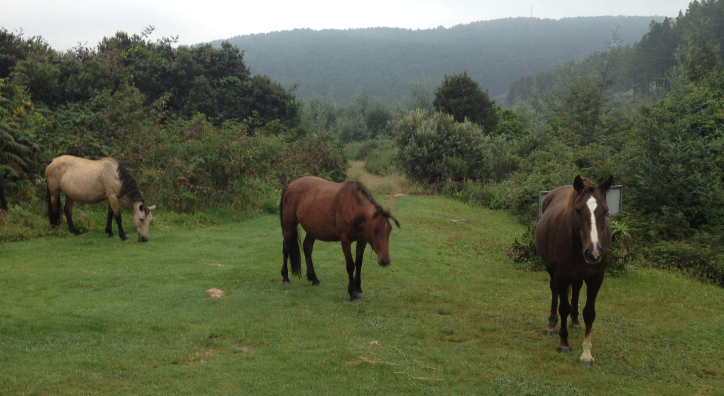 Wild horses are endemic to this area. Here they have come for the obligatory apple

Nobody had told Rob Spiers and Jaynee Levy – the designers of this trail – that there is a hiking design principle called Contour Paths. Every morning commenced with a precipitous climb usually to some distant beacon or mast and then it was down to the depths of a valley to view the descending water of a waterfall at close proximity at the bottom of its descent. 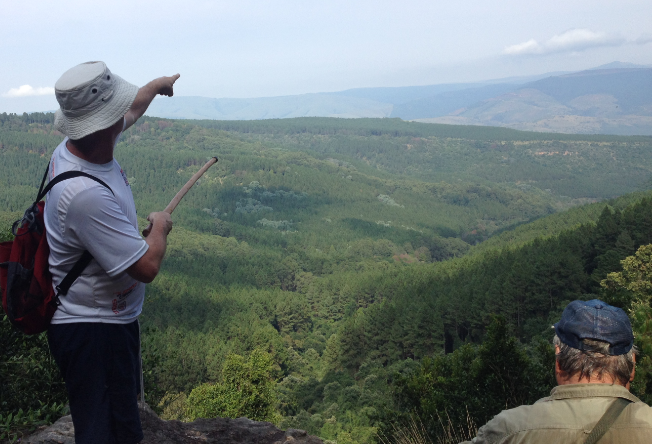 It was on the Fish River Canyon in Namibia that it first happened. Instead of the natural male rivalry being unspoken, its manifestation became more overt. Due to the arduous terrain on day one, the distance traversed is almost way below the arithmetic average walking distance per day. This is not a reason to panic. Far from it. One factors this fact into the plan. 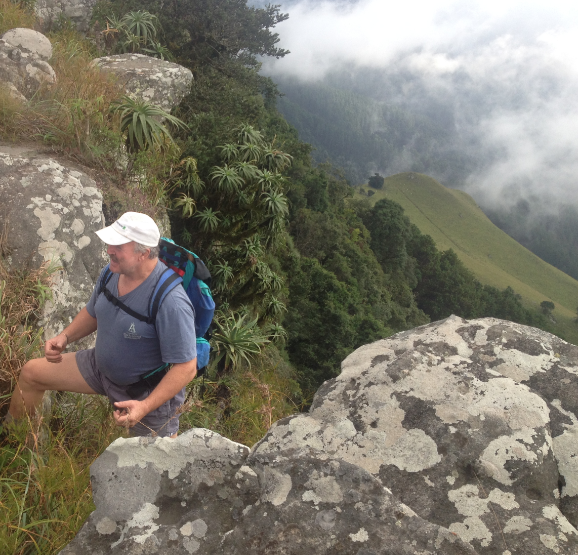 On morning of day two, I perceived that there was a great sense of urgency and haste to the packing in the morning. To retard their pace, I uwittingly proclaimed, “There is no rush!” To my utter astonishment, pandemonium ensued. Instead of slackening their frenetic speed, they accelerated their endeavours. Within five minutes everybody was packed and had departed from the camp site leaving me alone. 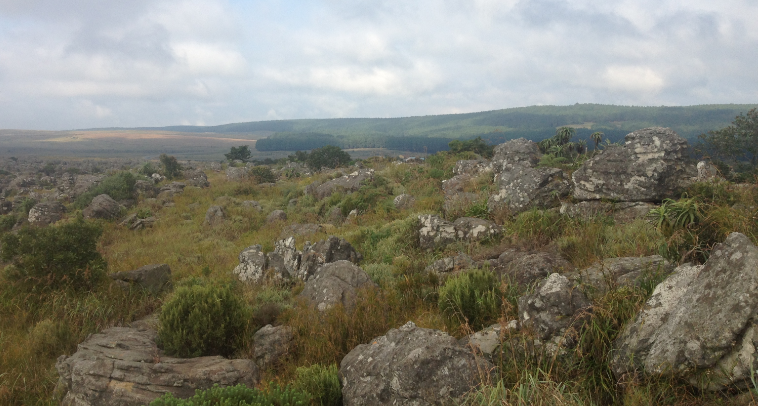 The barren rock strewn ridge of the escarpment

The same scenario played itself out the next morning too. Being the wily old fox that I am, on the following morning I adopted the opposite tactic. “Guys, we had better hurry otherwise the allotted distance today won’t be achieved!” The more likely parlance was a tad more brusque, like, “You lazy f***ers had better hurry up or else I will kick your *rses!” 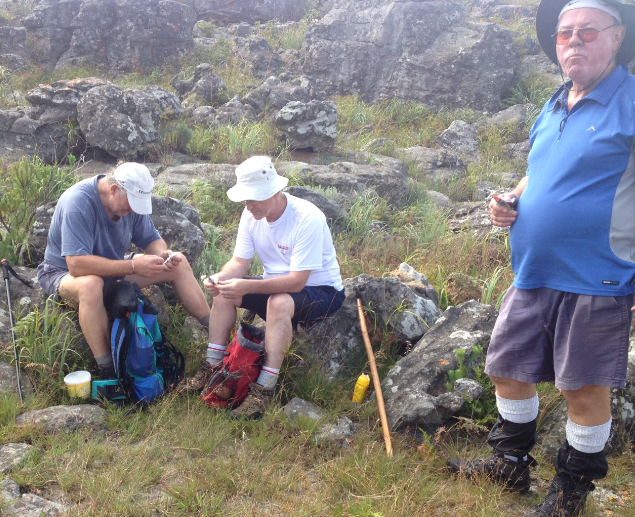 Yet again, at the point, pandemonium broke out. Normally rational discreet grown men went into a wild unadulterated panic the like of which I will never witness again. 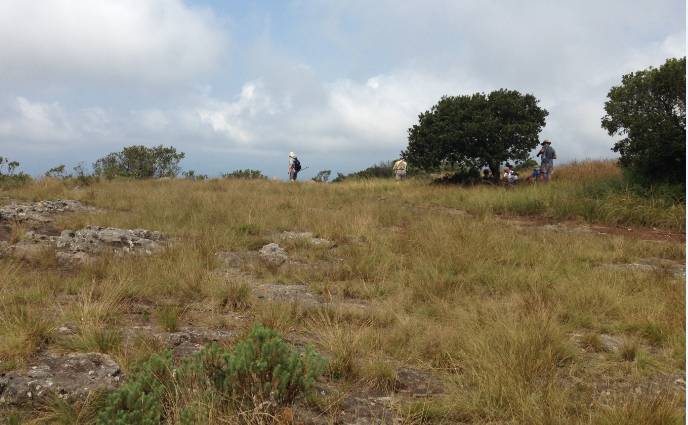 Climbing one of the many ridges, a synonym for hills in order not to dishearten the unfit amongst us

When I finally caught up with the hastily vanishing pack, in between gasps of air, I quizzed them why they were rushing as if chased by tigers. The answer that I received in response was that I had explicitly told them to do just that: to vacate the camp site as if it were malodorius. I countered that obvious train of thought by pointing out their illogical response to my statement on the prior two mornings.

I lost again. According to their logic, by stating that there was no rush, implied that THERE WAS A RUSH. 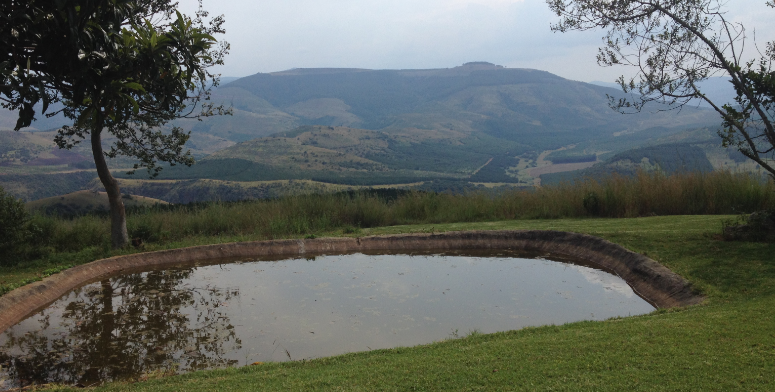 A view towards the west from Florence Hill Hut

Then this weekend – 20th & 21st March 2015 – Quo Vadis hiked the Florence Hill Trail. This is a stunning trail. It meanders along the edge of the escarpment in a southerly direction commencing just adjacent to the quaint village of Kaapsehoop. The escarpment overlooks the picturesque De Kaap Valley. As this is mist-prone area, one is frequently unable to view the spectacular valley below which is always a pity. Finally at the 10km mark, the trail veers inland leaving the escarpment behind. 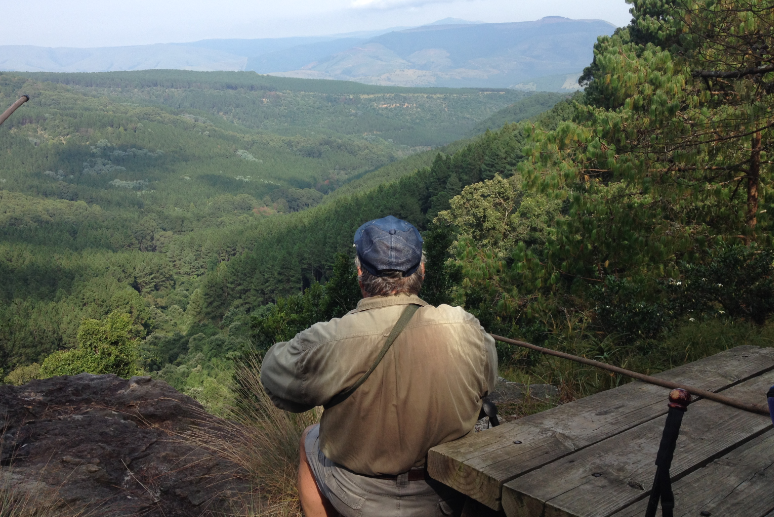 Gunter contemplating the meaning of life and whether the earth consists of 11 strings or only 8.

On this trail I was assailed by the whines of “How far is it to go? Or “How many hills are there?” or more inanely, “But I thought that you said that they were no steep hills!” Finally “Do we have to climb up THAT hill?”

Now if these had been a bunch of five year old children or ungrateful school kids out on a day’s walk, I could have tolerated it. 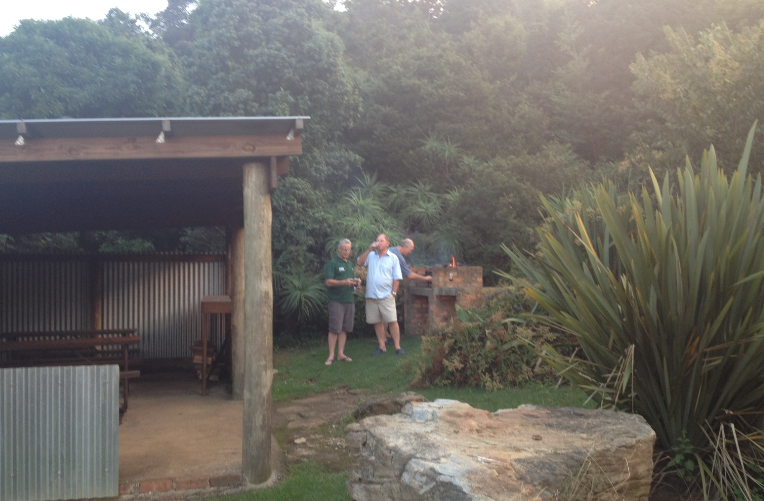 But with a bunch of sixty to seventy five year olds, I conceded that they had happily slipped into their second childhood without being aware of it.

The Cycle of Life had now firmly fixed its immutable gaze on the Quo Vadis Hiking Club. No longer were we the supremely fit but callow youths. Instead it was a coterie of old man out on a gentle stroll through the forest. 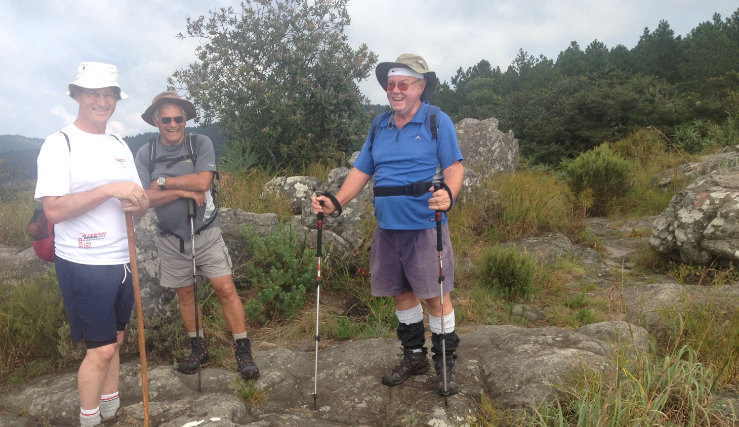 What we lacked in endurance and stamina, we compensated with camaraderie, friendship and esprit de corps.

Many of us – Kurt and I included – openly stated in the past that we would rue the day when Quo Vadis eschewed the ardours of a strenuous hike for its indolent variant, the slack pack hike, an oxymoron. As the definition of a hike includes carrying all one’s worldly possessions, any activity without the heavy pack could not be deemed a hike. This is akin to a runner in South African brazenly admitting that they have never completed a Comrades Marathon. Like running and the Comrades being inseparable so too is hiking and backpacks. 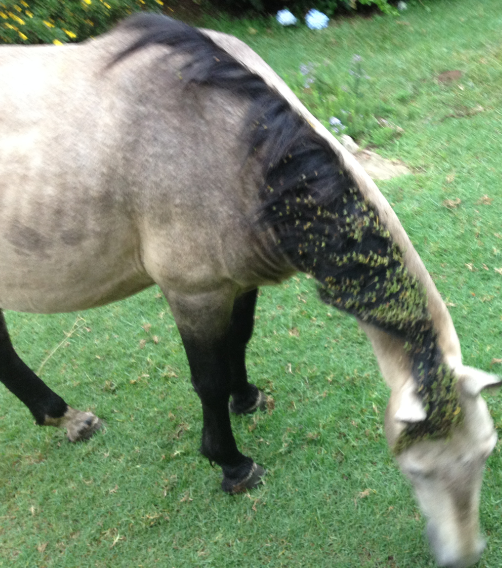 The manes of the horses were covered with burrs

By the same token, the meals are becoming more elaborate not that they were Spartan initially especially as far as the German/Austrian/Alsatian contingent were concerned. A hiking novice, Mr Peter Glover Esq has demonstrated his culinary skills on a number of hikes. On this one, he excelled himself and produced a magnificent oxtail potjie. By acclamation, he has unanimously been appointed as Club Chef on the princely stipend of one cold beer per hike. 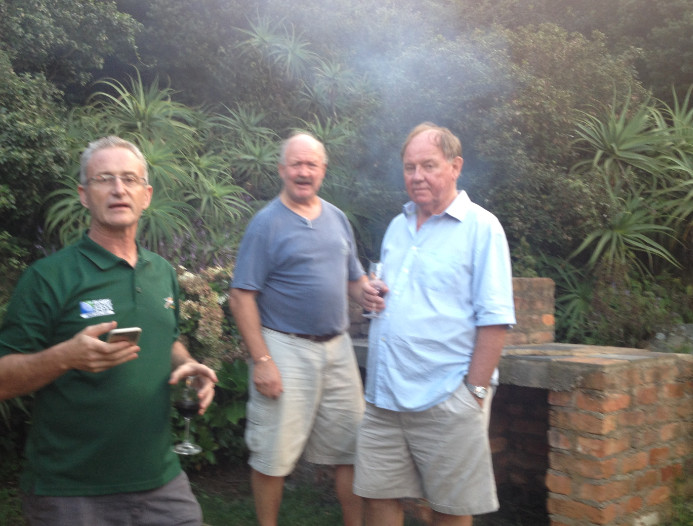 It was deemed a fair exchange as cold beers are like mother’s milk on a hike.

On Sunday, the first section of the trail is through a pine plantation that leads one all the way around on the lip of a gorge to a picnic table with a spectacular view across the gorge back to Florence Hill. In the opposite direction is the Sappi Ngodwana paper mill which be seen from around this point. It is the largest paper mill in the southern hemisphere. 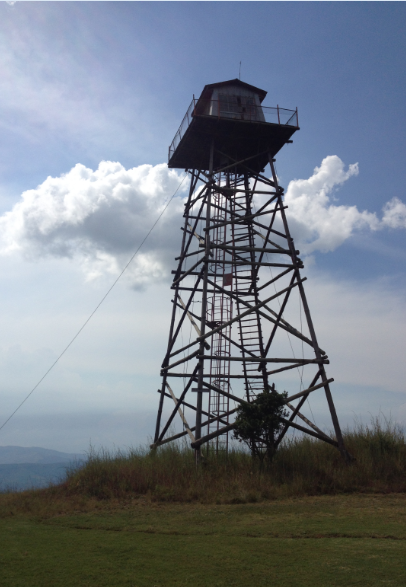 If we had crossed the tar road, we would have descended into Battery Creek from which we would have ascended through an indigenous forest and a short climb back to the village of Kaapsehoop.

The use of the future perfect tense in this last paragraph can only imply one conclusion: we took the short cut back to Kaapsehoop on the uninteresting tar road.

If evidence is requested to substantiate the decline and rot now pervading the once pre-eminent Quo Vadis Hiking Club which nurtured such Hiking Greats as Radzom, Baumgartl, Mick Crabtree, Mike Brown and Dean McCleland, this was a visible manifestation for all to observe. 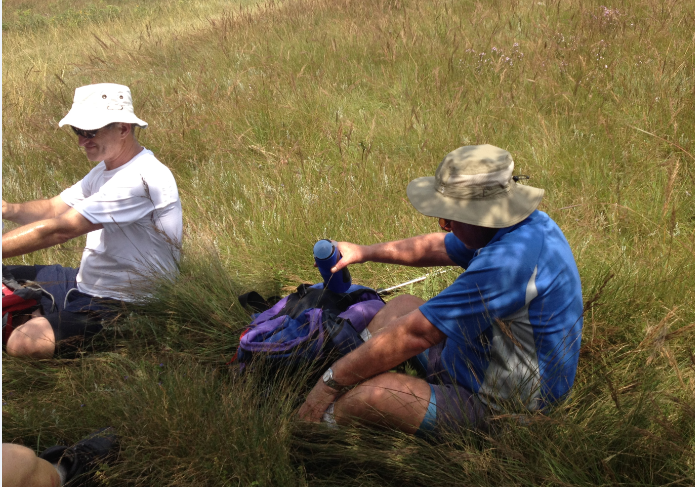 At Kaapsehoop, the old desire for a cold beer or a dozen after the hike was still evident but I am still aggrieved that everybody spurned my offer of a sip of my blister juice.