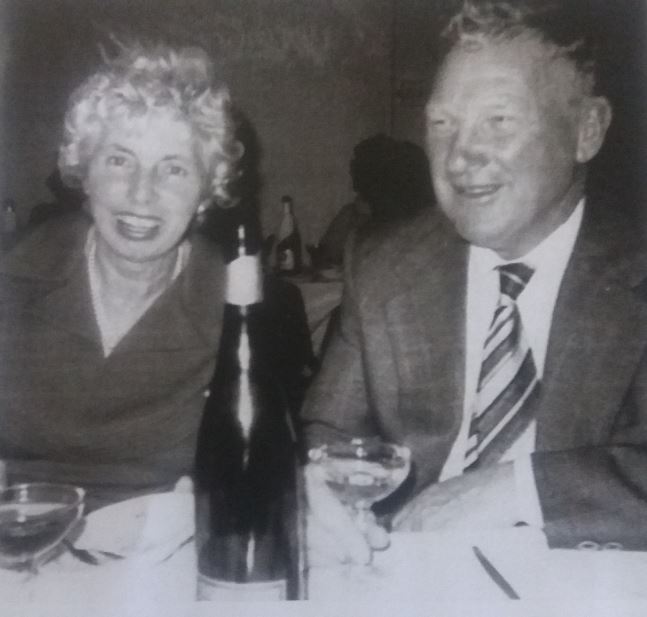 Bryce was the proverbial laat lammertjie. By being born on the 24th August 1922, meant that he was the youngest of the six McCleland children of Harry & Daisy McCleland of Schoenmakerskop. In what can only be described as a tumultuous few years, first his elder brother Francis accidently shot himself during an attempted break-in at his parents Tea Room, then at the age of 8 his father succumbed to Black Water Fever which he had contracted fighting in German East Africa.

Main picture: Bryce and Auret McCleland – most probably taken at their 40th wedding anniversary in 1986 when Mom was 65 yrs old – Dad was 68.

Being left destitute, his elder brother Clifford & his sister Kathleen was packed off to a boarding school in Alexandria, while his other sisters assisted their mother in the Tea Room. Fortunately being too young to contribute meaningfully to the operation of the establishment, Bryce could enjoy a carefree youth. The focal point of his boundless energy was no doubt the beach, the sea and the numerous rock pools. It is from this experience that his intense love affair with fishing and Schoenies was born. 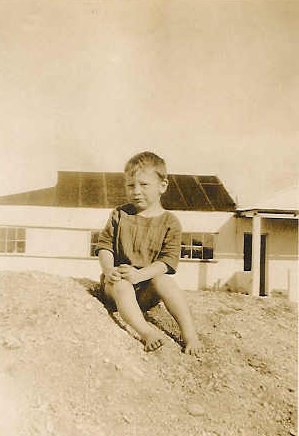 The only negative of living at Schoenmakerskop was that it was so far away from all amenities such as schooling. This meant that Bryce was forced to cycle the 15 kms to school in Walmer on a daily basis. This was offset by the pleasures of the sea. 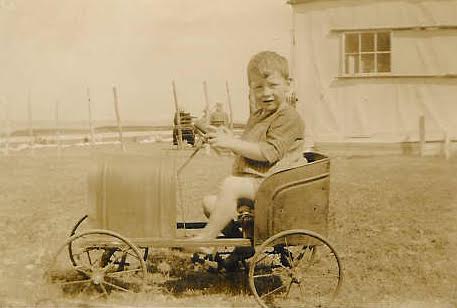 At some point during this time, Bryce acquired the nickname of “Brosso”. This sobriquet was an allusion to the colour of his hair. Having personally had to use Brasso whilst in the Army to polish brass badges, I can attest to its colour unlike today’s indolent youths. 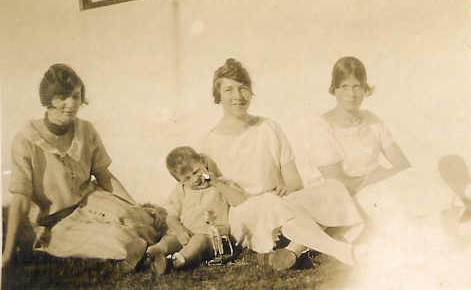 Bryce McCleland with his 3 sisters

After completing his schooling, he became an apprentice electrician. Subsequent to that he joined the Harbour as an artisan. This appointment precluded his being allowed to volunteer for the Army as his job was considered to be critical for the war effort as it involved the repair of ships which were in dock. 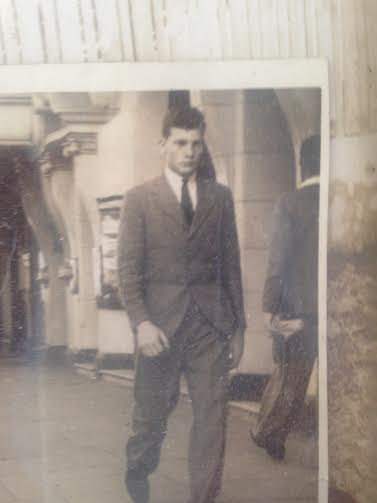 According to Fay Forbes nee McCleland “He met mom, Auret, shortly after the war ( I think).  She was a vibrant and colourful character who LOVED music. She could play the piano. As a young hairdresser at an establishment called Mason Central (sp) in the centre of town, her and her colleagues (Doreen Loveday was one in particular – Aunty Dor to us) would love to watch the service men walking up and down Main Street and enjoyed many an evening dancing the night away.  Probably in the Feather Market Hall, but also perhaps Lotus Gardens near Happy Valley –  Not sure of this but Mom told wonderful stories about those days..

Daisy McCleland was undoubtedly the matriarch of the family. What Daisy wanted, Daisy got. Personally,I can attest to that fact as my mother Eunice McCleland was often to butt of Daisy’s anger for wearing dresses which were too short.

Fay relates the fact that Daisy never always got her own way, “Granny Mac did not approve of her and tried her best to discourage Dad from marrying Mom.  I believe Granny Mac even went as far as paying Granny Anderson a visit.  Luckily, my dad,Bryce was smitten. He went against his mother’s wishes.” 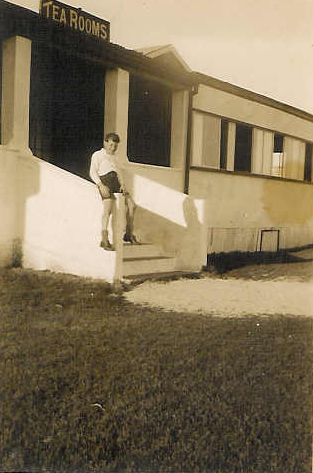 Bryce McCleland on the steps outside the Tea Rooms at Schoenmakerskop

A specific question that I posed to Bryce’s children was what epitomised Bryce. Fay thought for a while then replied, “What epitomises Bryce? Shew – I believe that those who knew him would probably have differing answers. Generally though, he was strong, tough and one of the hardest working men I have EVER known. Not just because he was my father.  His work ethic was incredible. Whilst we were growing up, he would sometimes work 7 days a week, doing overtime, in order to make money to put food on our table. I would sometimes go with my mom to fetch him from work at the harbour and we would sit in his ‘workshop’ waiting for the cranes to ‘knock off‘ 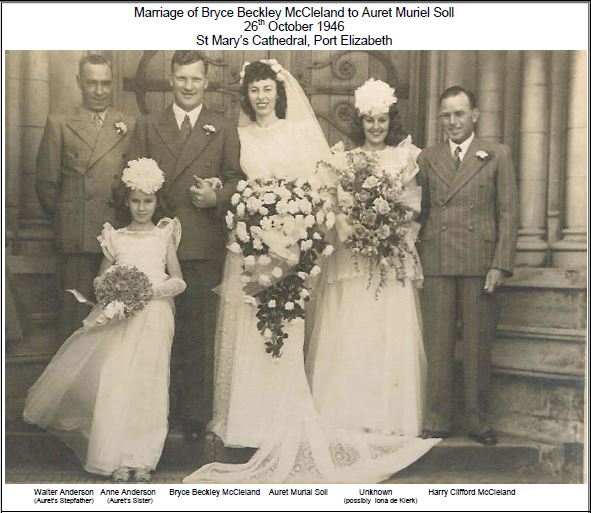 Marriage of Bryce and Auret McCleland on 26th October 1946

Despite his straightened financial circumstances, the elected to have five children: 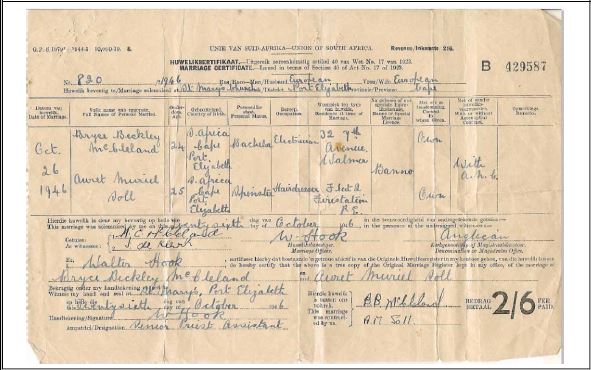 Fay recalls some other attributes of her dad, Bryce:

Why I have entitled this biography A Second Chance at Life was the fact that once his wife Auret passed on, a huge burden was lifted from his shoulders. Auret had suffered immensely for most of the latter part of her life due to arthritis. With this burden removed, the carefree spontaneous Bryce arose like a Phoenix from the ashes, a new lease of life. 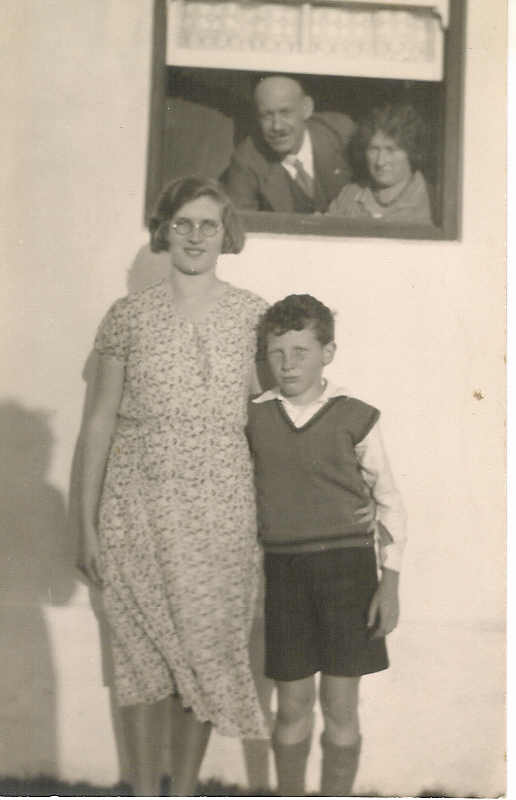 Bryce McCleland with Thelma and Daisy & Mr Clements in window

After moving into an old age home in Walmer, he found himself being requested to assist many of the widowed women with their DIY chores. Not being Machiavellian by nature, little did he realise that there could be an ulterior motive for these requests. One of them Wendy Curling [nee Gwendoline Mavis Sieverdink] seemed to appear all the time. Eventually everybody realised that the relationship was more than platonic. 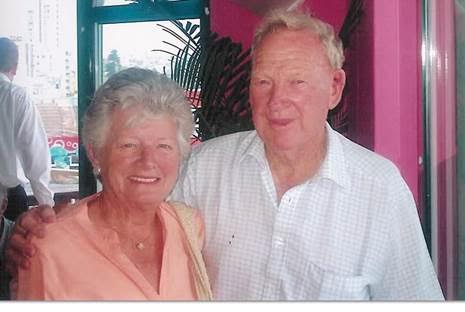 Eventually Bryce could resist her allure no longer. So he graciously agreed to married Wendy; a contented man. Apparently Bryce’s demeanour was more relaxed as he now enjoyed life to the full. Whilst in apparent good health, Bryce had a heart attack on September 30, 2005 and died.

History of the Wood’s Family in Port Elizabeth