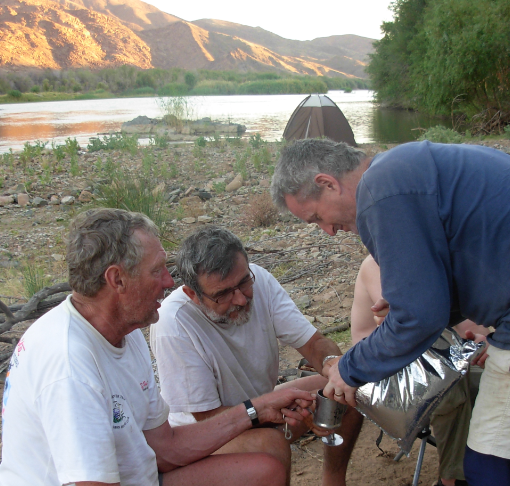 In 1994 the Quo Vadis Hiking Club was still teetering on the brink of extinction. Mick Crabtree had been a new appointment & shortly afterwards, his two mates Norman Dellar & Barry Williams had been brought into the Club. On our previous hike in the Drakensberg, a squat rotund Austrian – never call him German – appeared in the Club.

With Mike Brown deciding to retire from hiking altogether ostensibly due to shoulder problems but more likely due to complaints from the Spousal Department, a replacement was urgently required. Being work mates at CBI, Gunther invited his physical antithesis Walter Baumgartl to decisively outnumber the Prussian element represented by Kurt.

And so Walter appeared on the Protea Hike. With his voluble rambunctious nature, the skinny but lanky native of Munchen, he quickly made his mark. His trade mark signature of beer in the hand was rapidly established on day one.

The Protea Trail commenced at the Potholes at Bourke’s Luck & headed due east towards Mozambique. The first morning comprised a steep climb out of the gorge to the highest point on the hike. In spite of youth being on our side, all slowly shuffled up the hill merely intent on breaking the back of the hill. Walter quickly adopted his favourite position in the pack; right in front. Not merely in front but far in front. With his long legs & equally long stride, he steadily zoomed ahead.

Being Walter’s first hike, I was concerned that he might be overdoing it or maybe he would get lost. I need not have been concerned on either score. There at the tea break stop next to a clear rock pool lay Walter naked with a beer in hand. Next to him lay two empty beer bottles. I was concerned; would Walter make it up the mountain?

As we slumped down next to him on the rocks, there was a raucous welcoming hand with an even more enticing cold beer. Due to our taking so long to climb to this point, Walter had even been able to cool the beers down in the water.

On enquiry, he admitted to carrying 20 beers & 5 litres of wine in his pack. In astonishment, I queried whether he had forgotten his other kit in his exurberance, which he had not.

This set the scene for all the hikes for the next 18 years. Walter the unsurpassed emblematic hiker striding far ahead breaking the trail for the rest of the laggards.

Walter formed an integral part of what became known to the non-Germans, as the German Contingent. With all three being passionate hikers, they never missed a hike & became the core of the Club.

Walter had been involved with the German Special Forces in his youth before the commencement of his African Safari which was to last the rest of his life. As an accomplished hiker & skier, he easily overcame the long-distance endurance marches that the Wehrmacht attempted to break their spirits with.

What did break him however was the 42km Walk the Talk. Whereas normally I was unable to maintain the walking pace that Walter set on a hike, on this occasion about 10 years ago, I overtook a broken Walter sitting dejectedly on the pavement at the 32km mark. His voluble excuse was that he was able to walk on a hilly terrain but not on a smooth surface.

With his long legs & exquisite balance, Walter was the quintessential mountain goat. On even the steepest downhill, Walter was able to maintain a torrid pace as he leapt from one rock to the next without missing a beat. On the ladders on the Suikerboschfontein Hike, he was the only one in the Club able to walk down the ladder facing forward whereas the rest of us hang on for dear life as we inched our way downwards.

With his sure-footedness, he exemplified this by leaping between rocks even on a precipitous ledge whereas the rest would cringe merely looking at his antics as any slip would have meant certain death.

Not only was Walter the most rambunctious of the Club members, but he had a vast store of jokes, one for every occasion. Walter never failed to tell a joke appropriate for the moment whatever it was. Around the fire at night, he would entertain the guys with long-forgotten jokes some distasteful & off-colour, but that was Walter.

The joke that most epitomises Walter was on the first Orange River trip where on waking with a hangover after too many beers the night before he exclaimed volubly, “I had 15 beers last night & I am not feeling well this morning. Obviously one of them must have been off!”

With a love for a drink or two, Walter was notorious for carrying vast quantities of booze on a hike. The weight of his pack never seemed to slow him down or hinder him in any way. The last Otter Trail about 8 years ago exemplifies this. Near the start, an Italian tourist made some remark about Walter’s pack. Walter then challenged the tourist to pick up his pack. In astonishment, he was unable to lift it more than an inch. The offending mass was represented by 2 dozen beers & 5 litres of wine. Being an easy hike from Walter’s perspective, he made it up with additional drinks.

Walter’s love for the primal African bush was unfulfilled. The hikes were merely one facet of that love as he & Maxie would head to the bush whenever they could.

Walter lived his life to the full. One can bemoan his premature passing, as we should, but Walter led such an interesting & varied life that most would not accomplish such depth & breadth even in two lifetimes.

What I did not realise on the Protea Trail, Walter’s first hike, was that in retrospect one can call his 18 years with the Club as the Walter or more generally the German Epoch within the Club. His passing has left such a void that his indomitable & irrepressible character will never be able to fill.

Like many foreigners who come to the African continent, they are enamoured with its charm & wildernesses. Like a drug, they never get their fill but sup on its essence for the rest of their lives.

That is how I will remember Walter: the consummate hike, a joke teller & raconteur of the first order & a person whose very presence defined the essence of the Quo Vadis Hiking Club for nearly two decades. His passing has left an irreplaceable void.

The Swansong of Quo Vadis and How the Other Half Lives