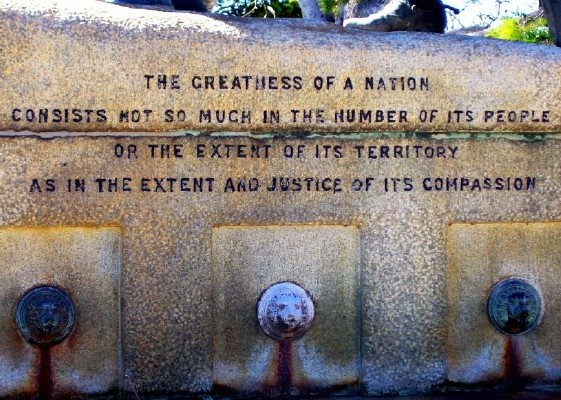 The greatness of a nation and its moral progress can be judged by the way that its animals are treated.

Apparently, this quote has been falsely attributed to Mahatma Gandhi.  Nevertheless, it remains a great quote.  What is not in dispute is the following broadly similar quote from 1905 that was engraved in perpetuity (we hope) on the Horse Memorial in Port Elizabeth.

Main picture: The ineffably humble inscription on the Horse Memorial

The one constant of humanity through the ages has not only been their cruelty to their fellow humans but also to animals which in the past were crucial to their survival.  Historically, the animal that suffered the most was the uncomplaining horse.  The Anglo Boer War was no exception.   Among the direct combatants, 22 000 British soldiers died while the canny and doughty Boers ‘only’ suffered 7000 deaths.  In addition, between 16 000 and 20 000 Africans who were used by both sides mainly in non-combatant roles died.  A further 27 000 Boer women and children, herded into the British invented concentration camps as part of Lord Kitchener’s scorched earth policy, died of disease and malnutrition.

However, to many people an equally grave crime was the careless disdain with which they treated their horses.  A staggering 519 000 horses were purchased by the British military with 360 000 of these being imported from across the British Empire.  Of these an even more staggering 300 000 died or were killed, a casualty rate of nigh on 60% as opposed to a casualty rate of less than 5% for the British soldiers.  These casualties include neither the donkeys and mules, nor the horses of the Boers.  The average life expectancy of a British horse, from the time of its arrival in Port Elizabeth, was around six weeks.

An unhappy horse destined for war being off-loaded at PE harbour.  Little did they know how unhappy they would be within 6 weeks.

Luckily, not all of humanity is that uncaring and this led to the iconic Horse Memorial being erected in Port Elizabeth.  Personally, I find it a very moving memorial.  It is not in the heroic mold of a rampant horse rearing on its hind legs while its rider, holding the reins in one hand, exultantly raises his weapon with the other just before the charge.  Instead it is a soldier on bended knee humbly ministering to his trusty and possibly exhausted horse.

Mrs Harriet Meyer must have been a compassionate woman, at least as far as horses were concerned.  She formed a committee of like-minded ladies who cajoled and horsewhipped the local citizenry and businessmen into raising the tidy sum of £800 needed for the memorial.  The statue was initially placed near the intersection of Rink Street and Park Drive where it was unveiled by the Mayor, Mr Fettes on 11 February 1905.  He obviously was neither a very charismatic speaker nor properly attuned to the humble humanity expressed by the statue if his speech was anything to go by.   Part of his speech was reported by the EP Herald as follows:

“To raise a monument to the ‘brutes’ that perish is considered by many to be misplaced sentiment, while some are inclined to think with Louis Wain “that all animals have their season of happiness in a hereafter before their final effacement, as a reward for the trials they undergo in life, while under the dominion of man.”

Why couldn’t he just have said sometime like, “We are here to pay tribute to those magnificent horses who gave their all in the service of man without complaint or the prospect of reward in the here or the hereafter.  We are truly humbled and indebted”

Some people are born longwinded, pompous and arrogant and there’s just no cure for it.

Barbarians at the Gate:  Who The EFF[1] Do They Think They Are?

In the 110 years of its history until 2015, the Horse Memorial stood undisturbed and unmolested.  No one in the cloak of dark tried to steal so much as a gram of bronze or tag it in any way.  The only time that the monument was disturbed was when it was moved to its current location on the corner of Rink Street and Cape Road in the 1950’s.

This peaceful state was not destined to see out the 111th year.  The #RhodesMustFall campaign was roiling SA and Port Elizabeth was not to escape its wrath and hype and victimhood.  Various colonial symbols and statues were defaced or had paint or faeces thrown over them.

In broad daylight on 6th April 2015, with hearts full of race hate and rage and heads full of self-importance and stupidity, a detachment of EFF irregulars attacked the defenceless statue and tore the soldier off the granite block.

I wonder if these future Class War Veterans stopped to read the inscription?  Some people are born stupid and, for that, there is just no cure either.

[1] EFF – The Economic Freedom Fighters is a political party established by Julius Malema after he was kicked out of the ANC in 2013.  Its only discernible policy position on any aspect is one of wanton disruption, race baiting and insult hurling.  All their attempts at a logical explanation of their policies are illogical and/or wishful thinking.

Port Elizabeth of Yore: The Story of the Equestrian War Memorial

Minority Government: Is it a Poisoned Chalice for the DA?

Can the ANC Press the Reset Button?