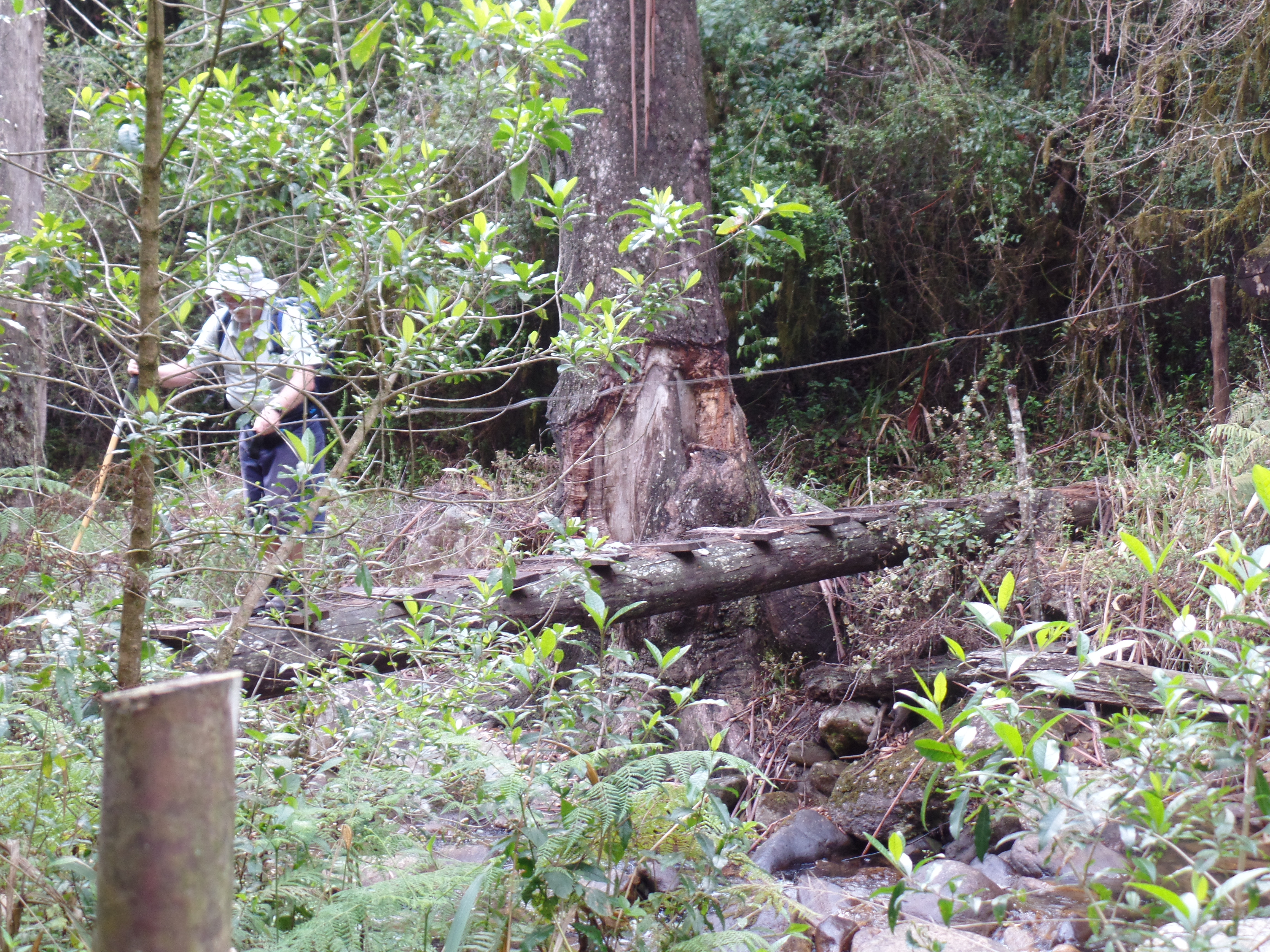 This trail has been the entrée of many a person into hiking. So it was with Malcolm Royal about 20 years ago and his fellow Outbound Adventure Mate, Peter Glover, five years ago. In the case of the latter, it was contemporaneous with a decline in hiking standards within the Quo Vadis Hiking Club. Whether Peter was instrumental in this decline in refusing to adhere to hiking norms such as carrying a hiking pack or whether he merely epitomised the general lowering of standards as the members of the Club reached old age, I am not sure. Whatever the reason, we have now set the bar so low that hiking is optional. So it was this weekend.

Main picture: One of the numerous bridges on the Magoebaskloof Hike

Let us take Friday as an exemplar of this new low. Of the hikers – the word is used very loosely in the QV context – 50% drove to Woodbush Hut and 50% walked the route. Even those who hiked did so sans packs. On Saturday, the participation rate had increased to 4 out of 6. In retrospect, it was probably wise that these two miscreants did not join us as the new route is much tougher than the old one. But Sunday was a nadir! With cool weather and a 30% chance of drizzle, the unanimous consensus was that it was too long, slippery and possibly wet, so we all demurred. Even advanced as an excuse was that we would arrive home after dark.

What a bunch of wussies! 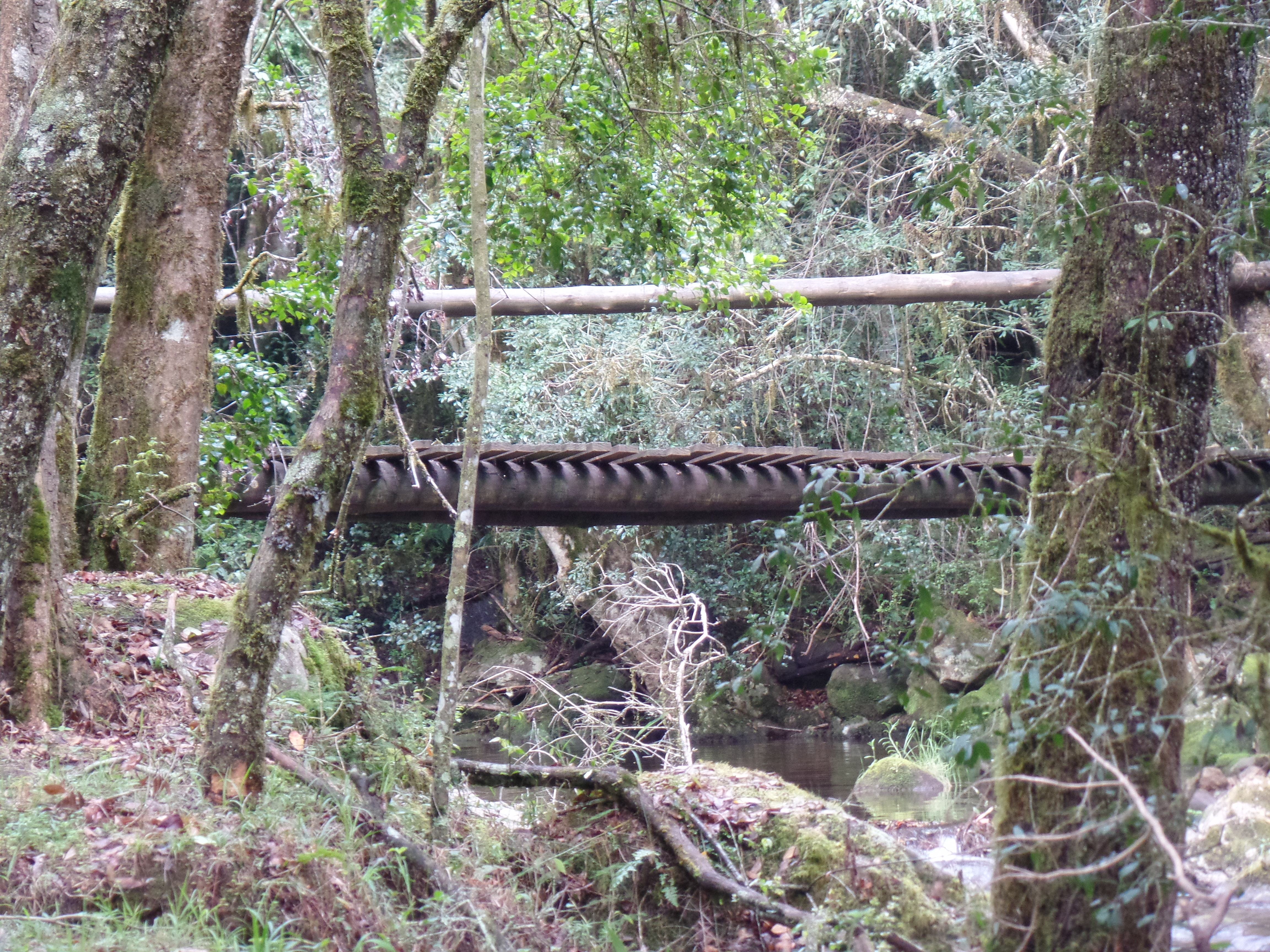 Bridge at the Dokolewa Hut

In only one respect has the Club maintained its standards and that is in the alcoholic beverage department. Following the norm over the past 25 years, the German team will merrily consume all the alcohol for the whole hike on the first night. In doing so, they committed one of the most heinous crimes and cardinal sins by opening a bottle of Clos Malvern last. At that point, neither of the competitors would have been any the wiser if they had been presented with a glass of vinegar instead. 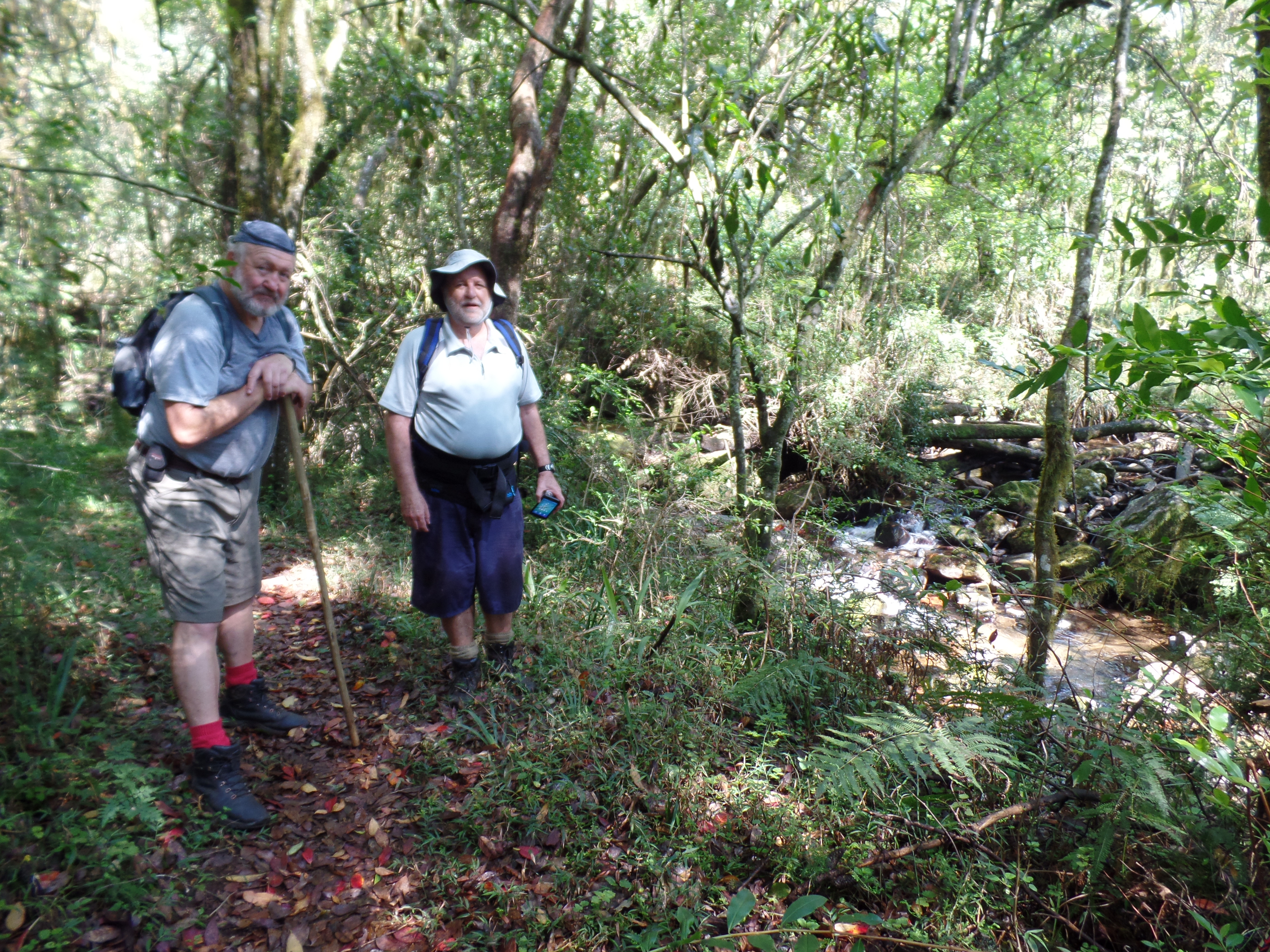 Peter and Dean on day 1 of the hike

Over all the years of organising this hike, I have always booked the huts in the following sequence: Woodbush, Waterfall and Dokolewa Pools. The reason for this order is that the shortest part of the trail is from the Dokolewa Pools to Woodbush.

When trying to make a booking this time, I was informed that we had to take to option – De Hoek, Woodbush and Broederstroom – as the other huts were fully booked. Despite proposing different dates, SAFCOL was steadfast in their refusal to accept my combination on ANY other day. As the trail is seldom used, it was highly unlikely that these huts were filly booked on every day of the week!

Ultimately what does one do with bureaucracy but comply with their requirement. Hence we used two huts that we have never used before. 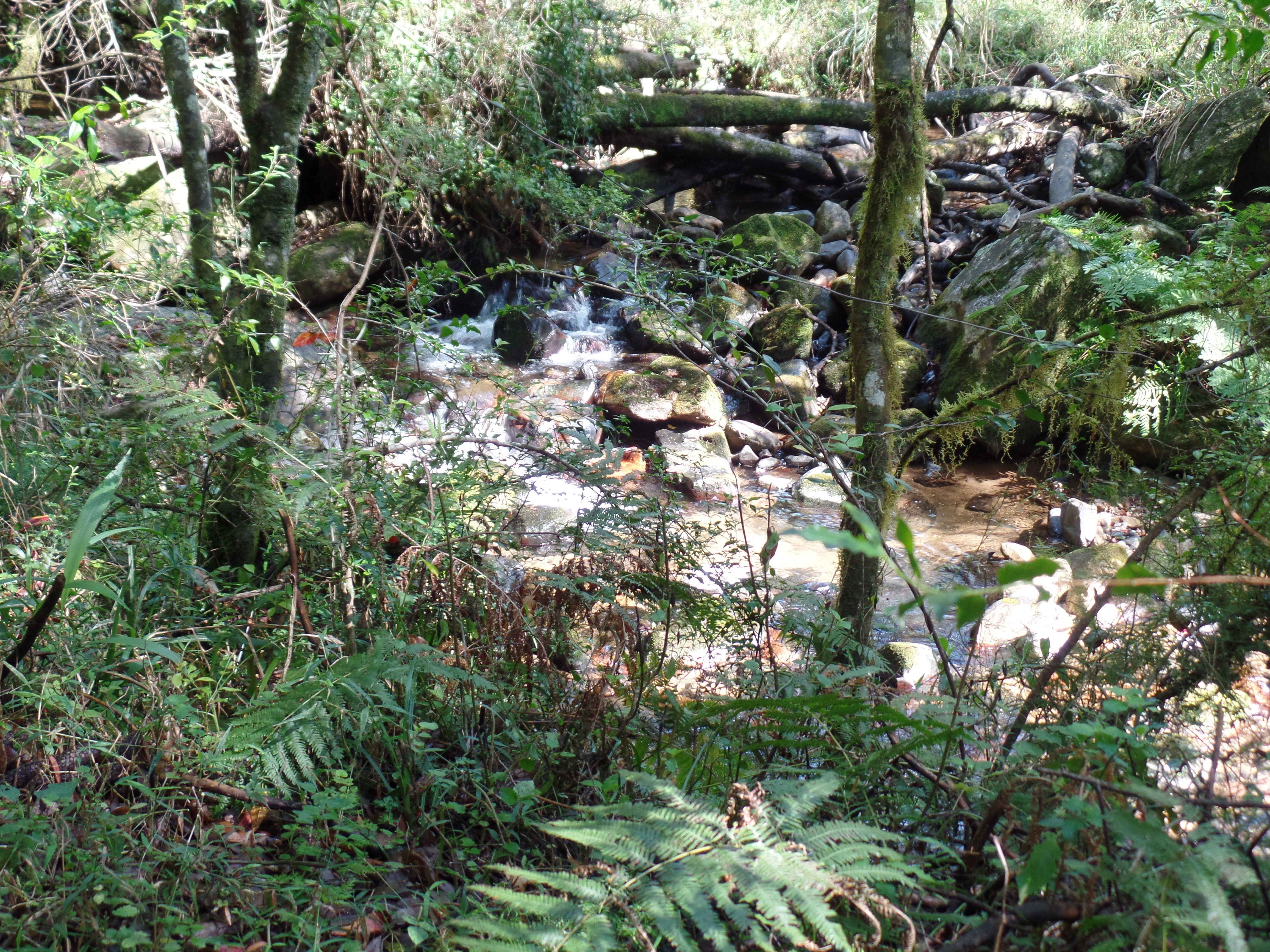 View of the stream from Dokolewa Hut up to Woodbush Hut

Instead of the normal superb hike which operated on clockwork, there were a number of incidents which enlivened matters a tad. First to give Nigel the mutters was when we were travelling on the road past the Debengeni Falls. On the track adjacent to forestry machinery, his vehicle could not get traction on the road surface as these forestry vehicles had churned it up into a muddy soup. Our first attempt at rescue was to place branches on the track. When that did not work, mainly due to the paucity of thin branches, I tried to walk to De Hoek Hut. After a few hills, with dusk approaching and without a torch, discretion was advised. So I returned to the stranded vehicle. By now Nigel was experiencing a serious case of the mutters about the fact that the other party had not informed us of the state of the road. Of course that was an impossibility as there was no cell phone reception. After extricating ourselves from the quagmire, we drove back along the road from whence we had come 20 minutes previously in order to review of the split in the road. There, pointing ambiguously between the two roads, was the sign. What should have been a dead give-away that the right fork, that we had taken, was the incorrect road, was the no-entry sign. One strike against the McCleland / Asprey team. 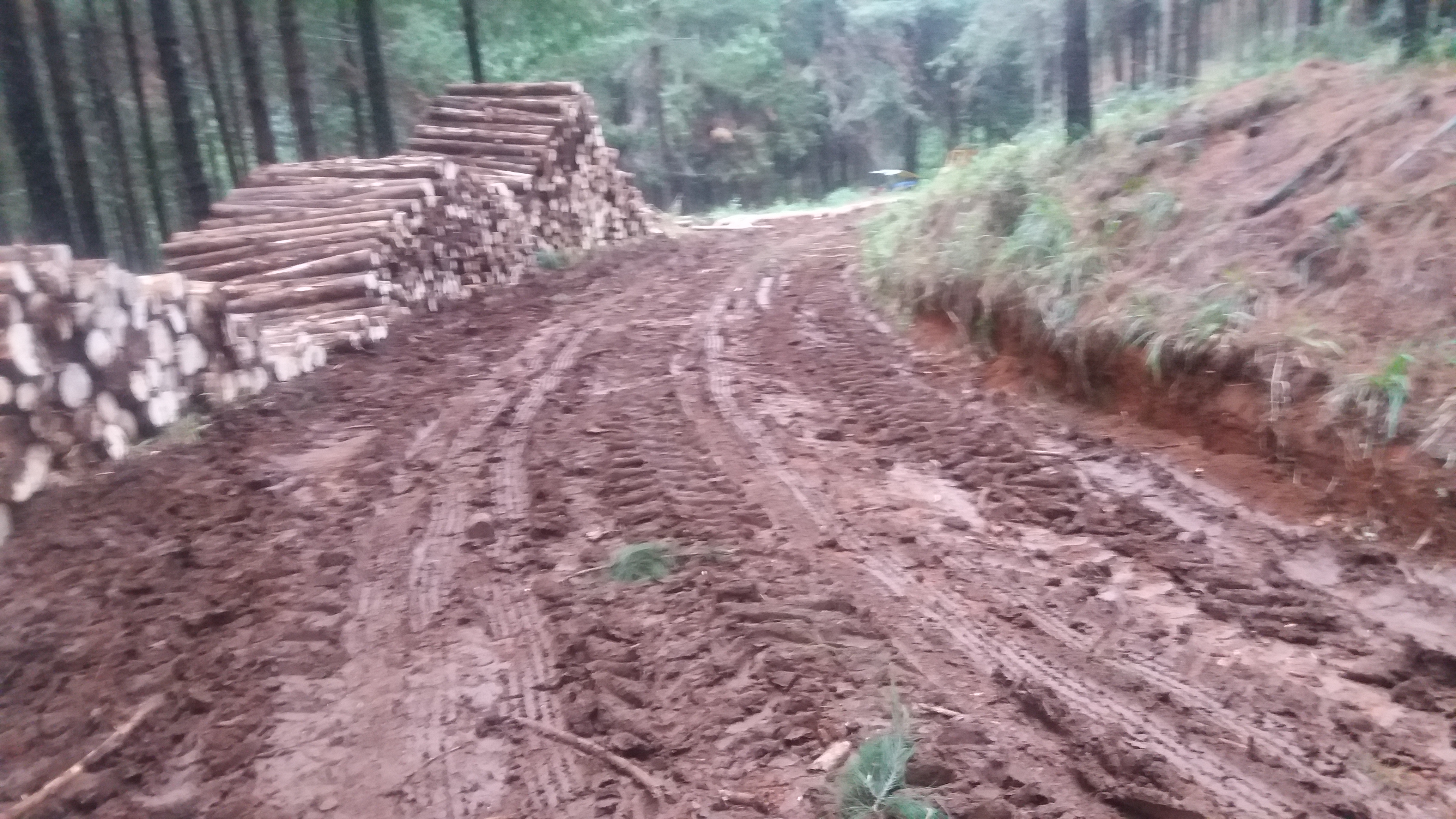 Where Nigel’s car got stuck

As regards injuries on the trail, the QV HC has been fortunate. Apart from Clive breaking his ankle on the Num-Num Trail – fortunately close to the finish, there have been a number of near misses such as Peter’s head first dive onto rocks on the Lesoba Trail last year. Who can forget Kurt’s somersault on the Golden Gate Hike during the year 2000 when he stepped onto a moss-covered rock. He was awarded 10 out of 10 for both execution and grace. His display of agility was also highly commendable. On the same hike, Corrie was awarded a 0 out of 10 on all counts when he slipped on concrete paving prior to commencing the hike. He went down like a sack of potatoes and hit the ground without even putting his hands in the brace position, which is usually instinctive. 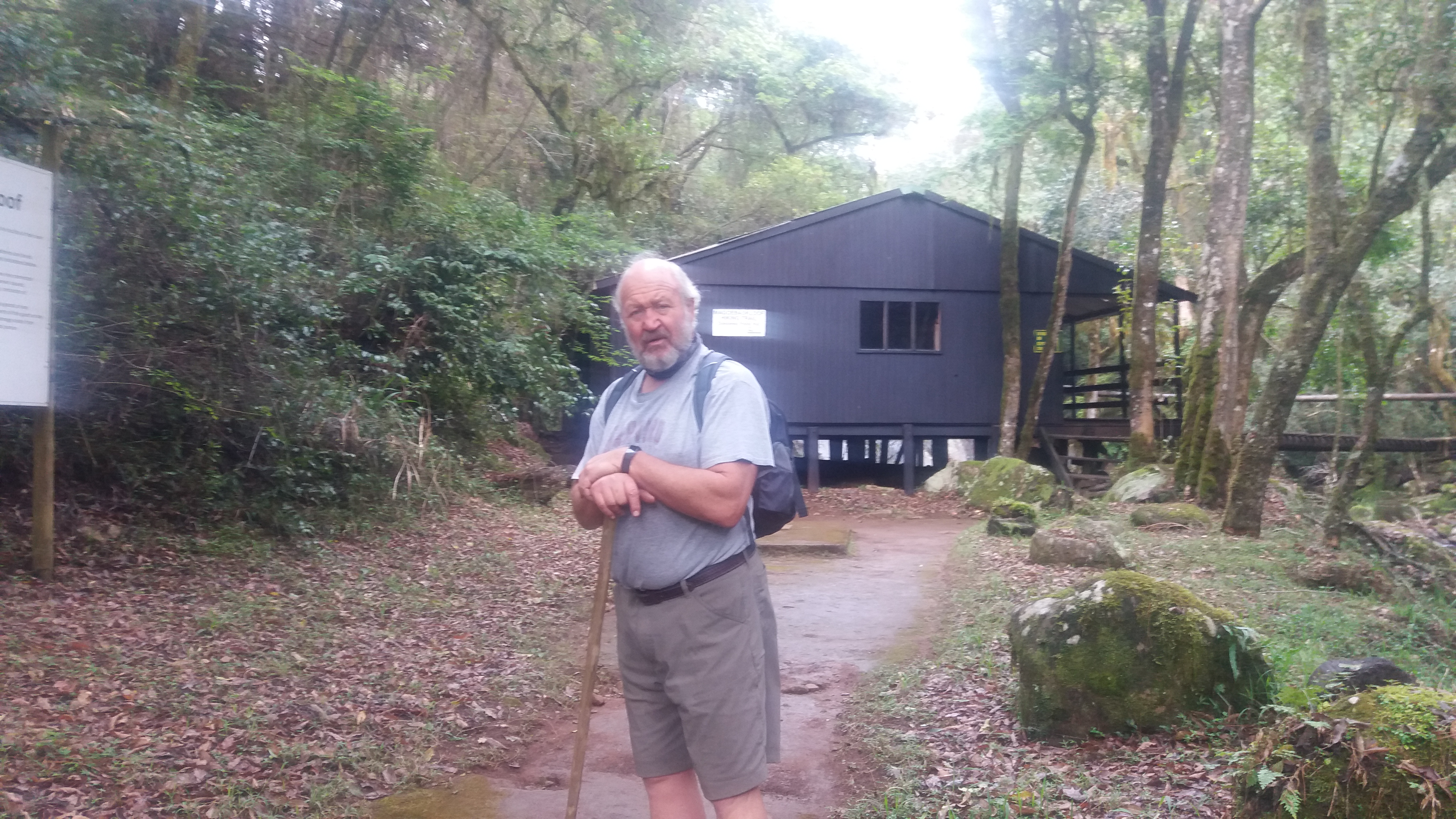 In this case, it was the slippery bridges which was the catalyst of this possible catastrophe. It was self-evident that the whole of the Magoebaskloof area had received a substantial amount of rain over the recent past as pools of water were evident everywhere. The problem was that the slats on the wooden bridges were slippery. For the first 4 bridges this did not cause undue problems as the slats were covered with chicken mesh. It was the next bridge that was problematical as the mesh on certain slats was no more. Finito. I suspect that where the surface was at an incline, the pressure on the mesh had forced it to come adrift. That is exactly what occurred. As the bridge reached the eastern bank, the bridge surface suddenly rose. As I stepped onto the slat without any mesh, my foot slipped totally off the slat. As it was a slope, I fell backwards. A metre and half below was a rock-strewn stream. Fortunately I fell straight backward onto the narrow bridge. Partly what saved me was the fact that my legs were trapped between the slats preventing me from tumbling backwards off the bridge onto the rocks below. If that had occurred, I would have incurred serious and possibly life-threatening injuries.

Hardly had this happened when Nigel and I then lost the trail and were forced to cut across to the Woodbush Road. 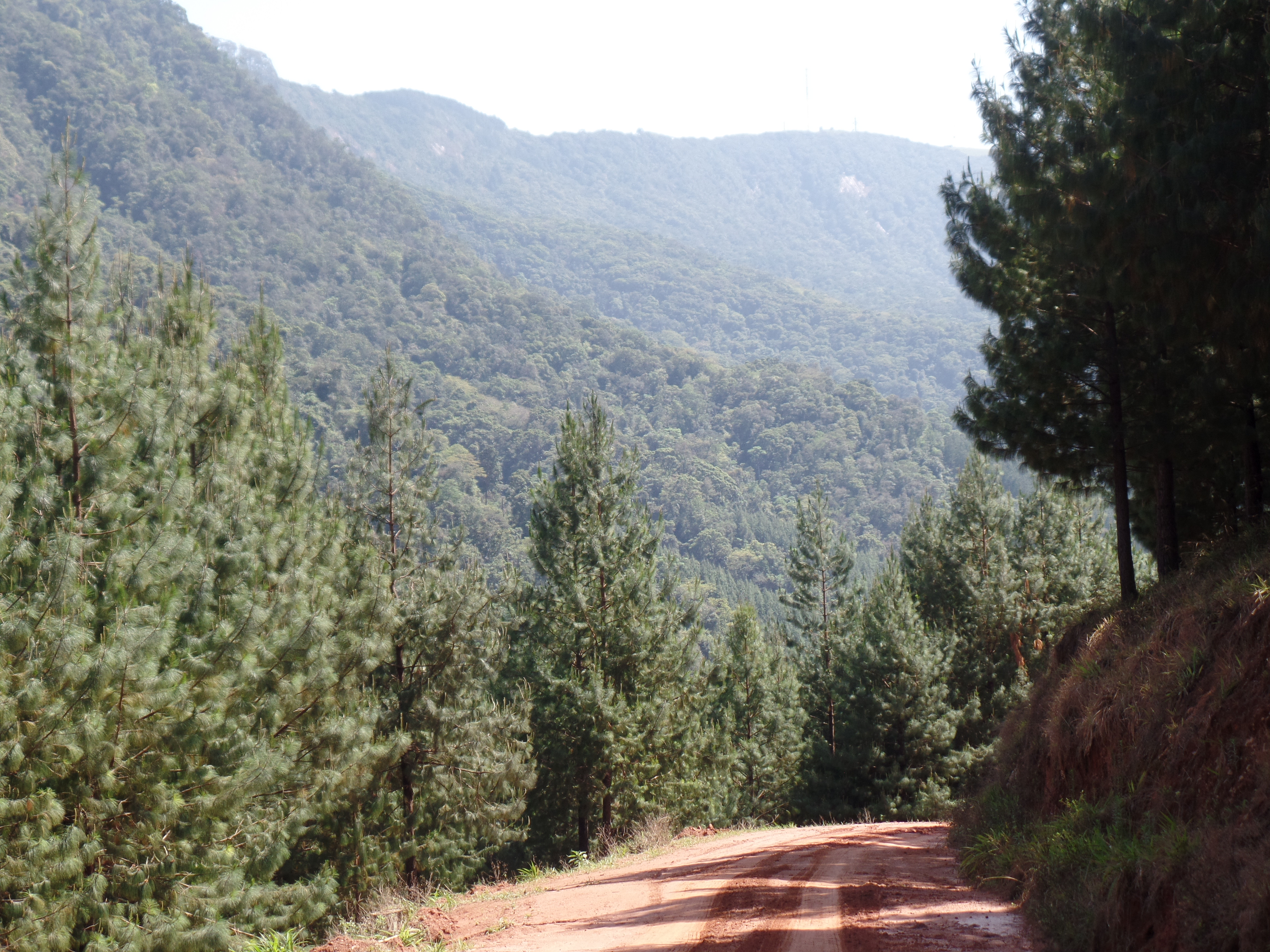 View across the Magoebaskloof forests

For their part, the three non-hiking hikers only role was to carry the packs from De Hoek to Woodbush and present cold beers to active participants of the hike on completion of the hike. Quite the contrary. Rather than having a quiet drink in the arboreal surroundings at Woodbush Hut after over-imbibing the night before, they headed to the nearest pub which is located in Haenertsburg. 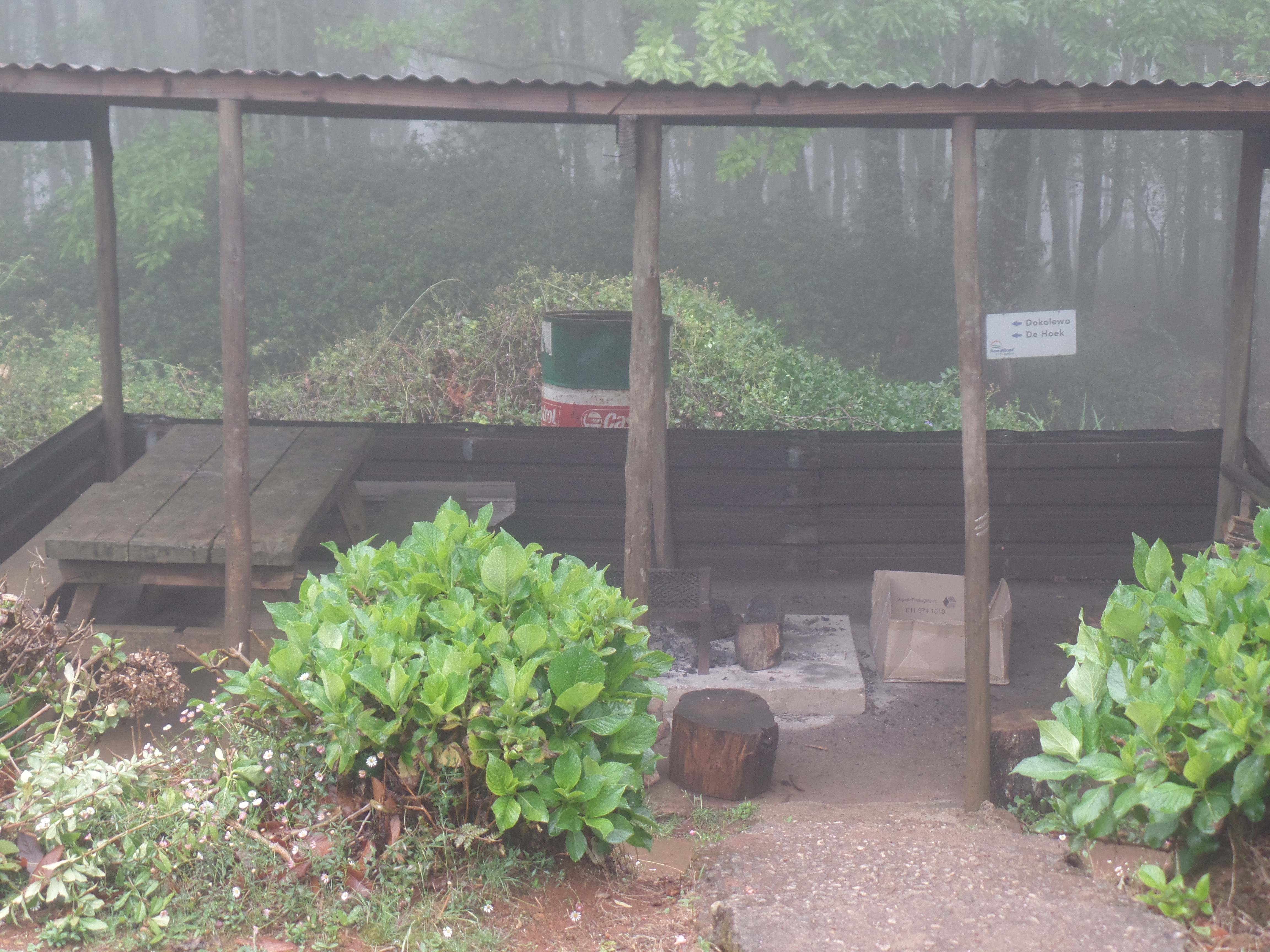 The rain at Broederstroom Hut forced us all inside

Instead they failed dismally in their primary mission and left the unlikely trio of Glover, Asprey and McCleland waiting for their return in the hot sun at Woodbush Hut. Meanwhile, back in the pub, the three non-hikers had, by their third beer, forgotten about their fellow hikers waiting for their drinks. Fortunately they did not to attempt to drink all the pub’s stock but rather decided to finish their stash of booze at the hiking hut. 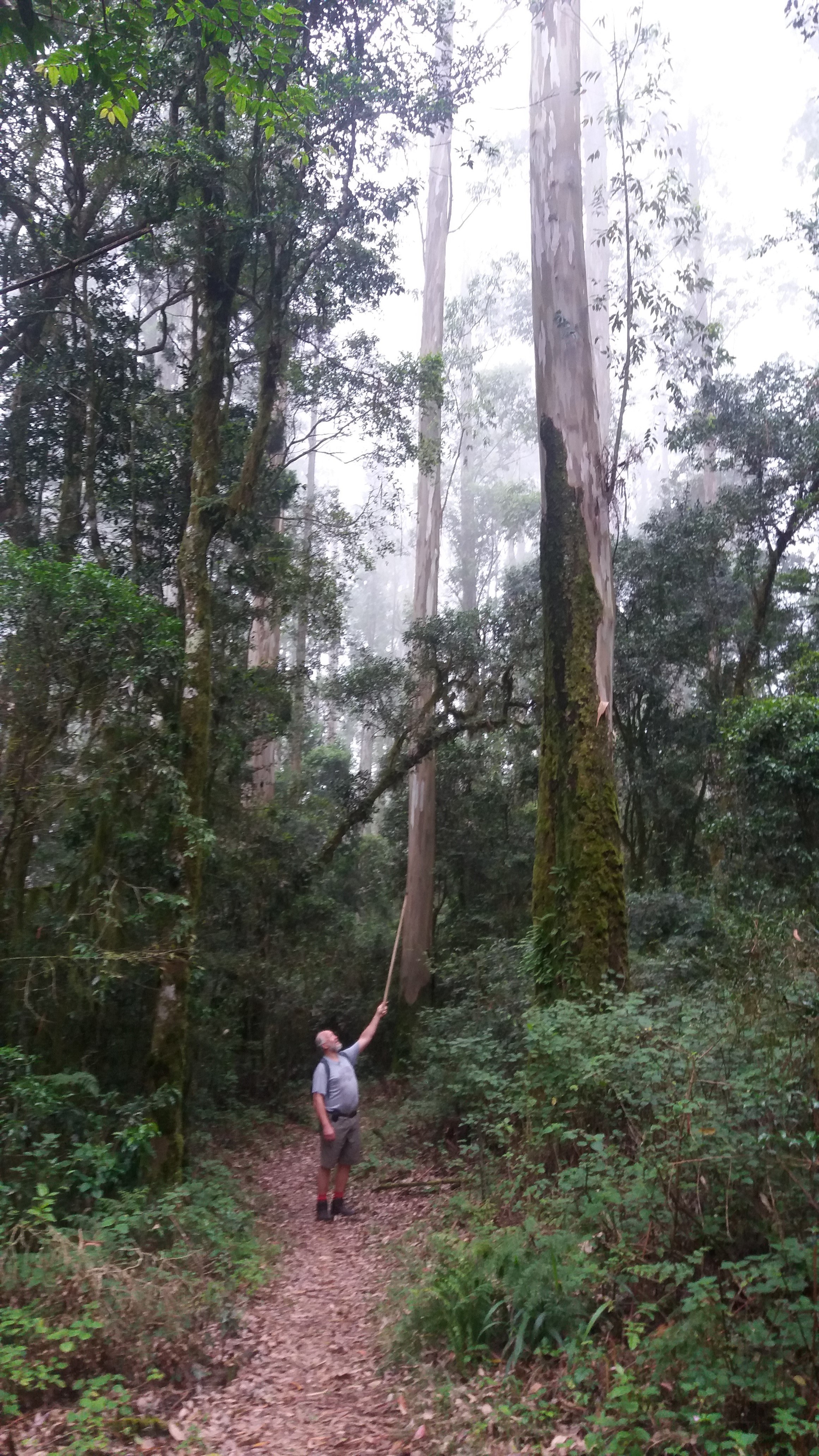 The new look Mr Glover pointing out the tallest tree

A day in the mist, wind and rain

To me, in the past, this section was the most boring as it encompassed about 70% pine forest. Approximately a kilometre or two from the start it does have a number of the tallest planted trees in the world. After that there are several miles of indigenous forest and then sterile pine forests for the rest of the way. In other words, there was very little to recommend it. As a consequence it was always categorised as a slog in my mind. Then on our last hike here, this day’s hike had been shortened by eliminating the section to the picnic area. By itself, the park is extremely scenic with the Broederstroom River forming a semi-circle around the area sprinkled with old oak trees supposedly planted by Lady Ann. Other than that, the extra distance to reach this area is outweighed by the unscenic route to reach it. 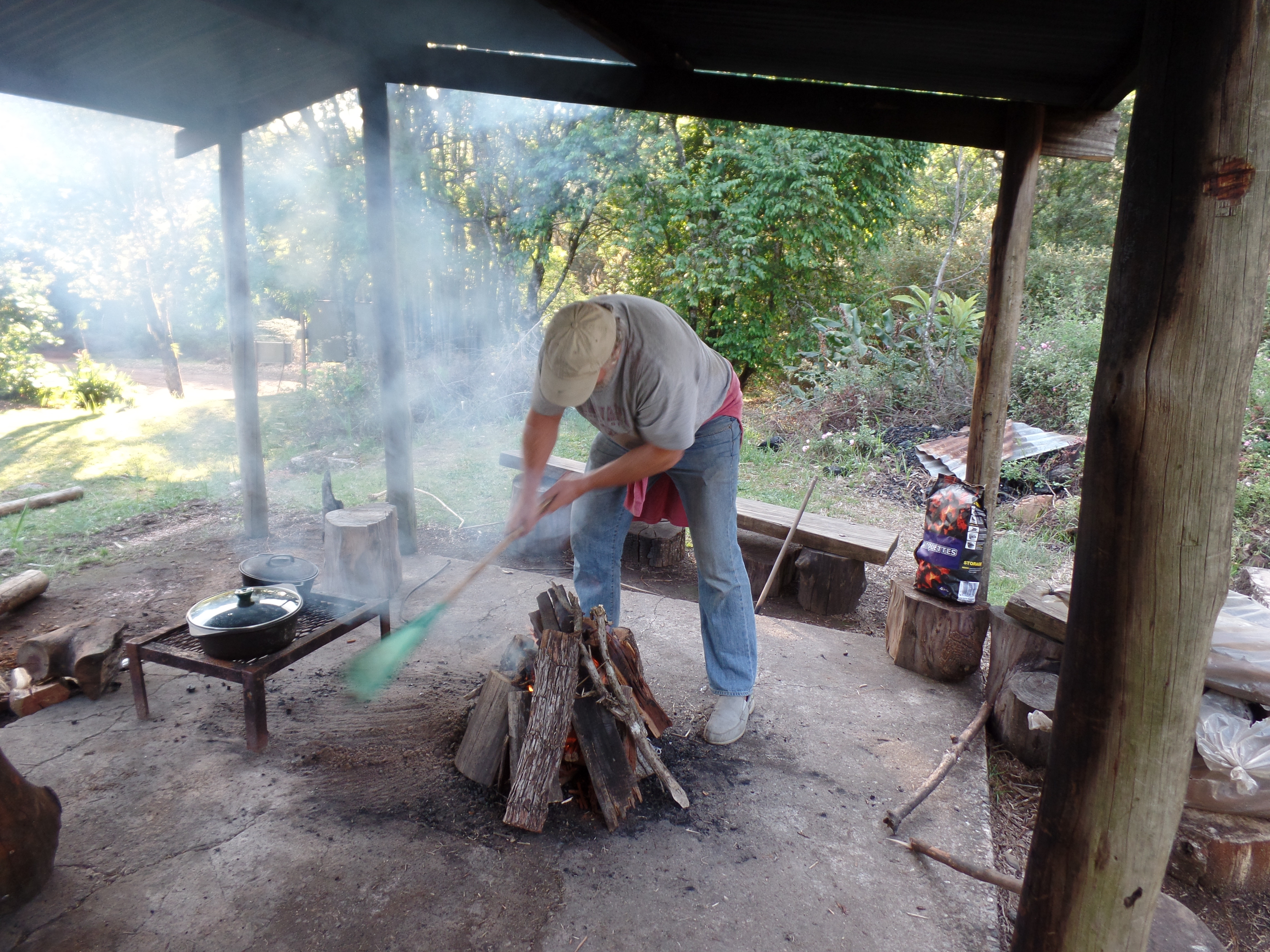 After the plantation of tall trees, the path still veers into the indigenous forest but instead of emerging from the pine trees after several kays, on this occasion the path veered southward into yet more indigenous woods. And still more. As they are wont to do, all good things come to an end. It terminated at a forestry road. 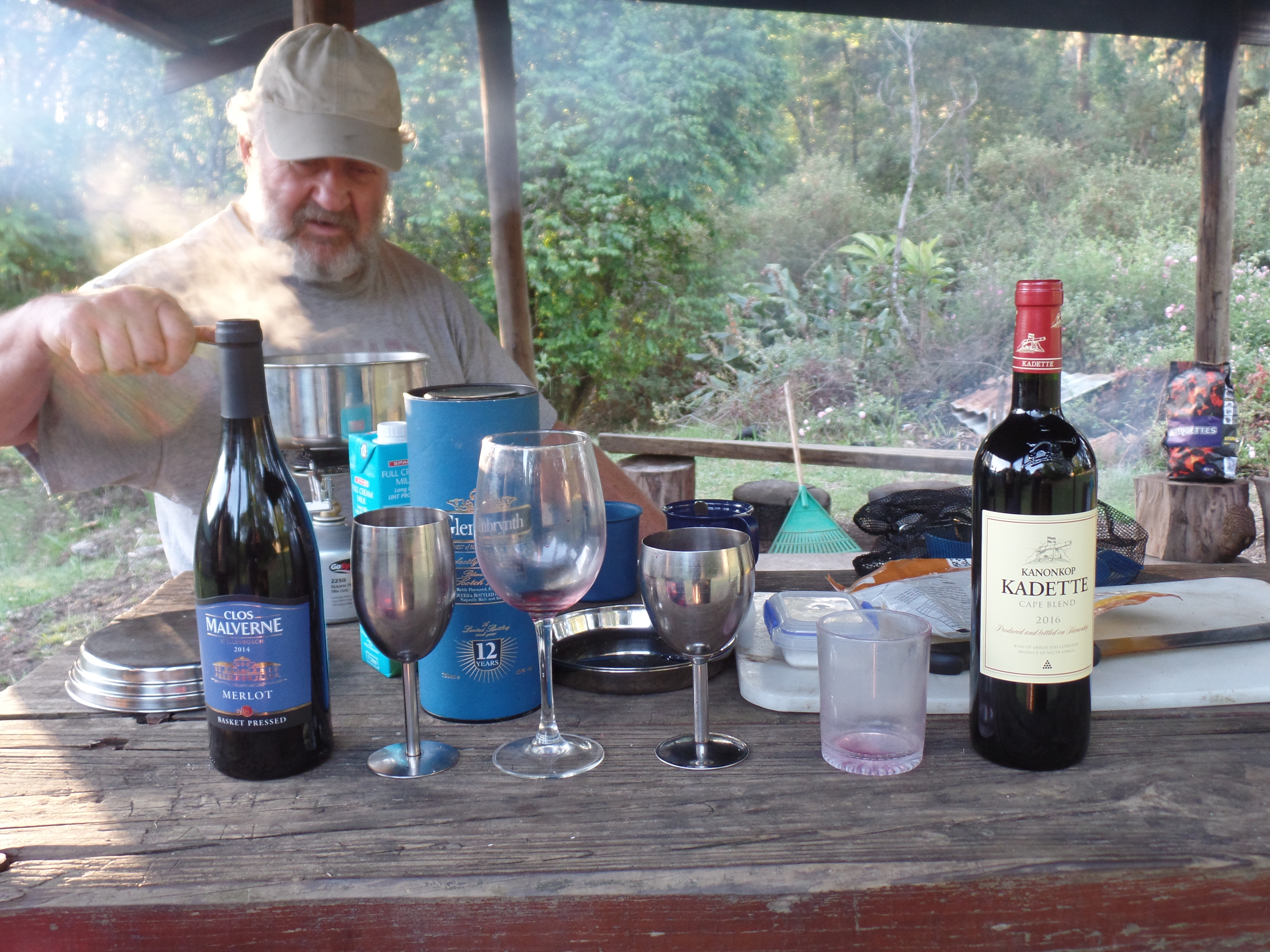 As luck would have it, Nigel, the most experienced hiker amongst us, did point duty while Peter and I nattered about profundities such as what did Chamberlain ask Lord Halifax on the 11th May 1940 in his office while Churchill was in attendance. His office overlooked the Horse Guards Parade. When neither replied Chamberlain unwillingly recommending Churchill as Prime Minister to King George VI. As the two of us grappled with this momentous issue, a kilometre or two slipped by without any further footprints being spotted. Faced with the prospect of walking into uncharted territory, we were compelling to retrace our steps back to the start of the track section. There, a few metres further on, was the footprint half hidden by tall grass but nevertheless still visible. In sheer relief we headed along this new path. At this point, as if to compound the misery, it started raining. 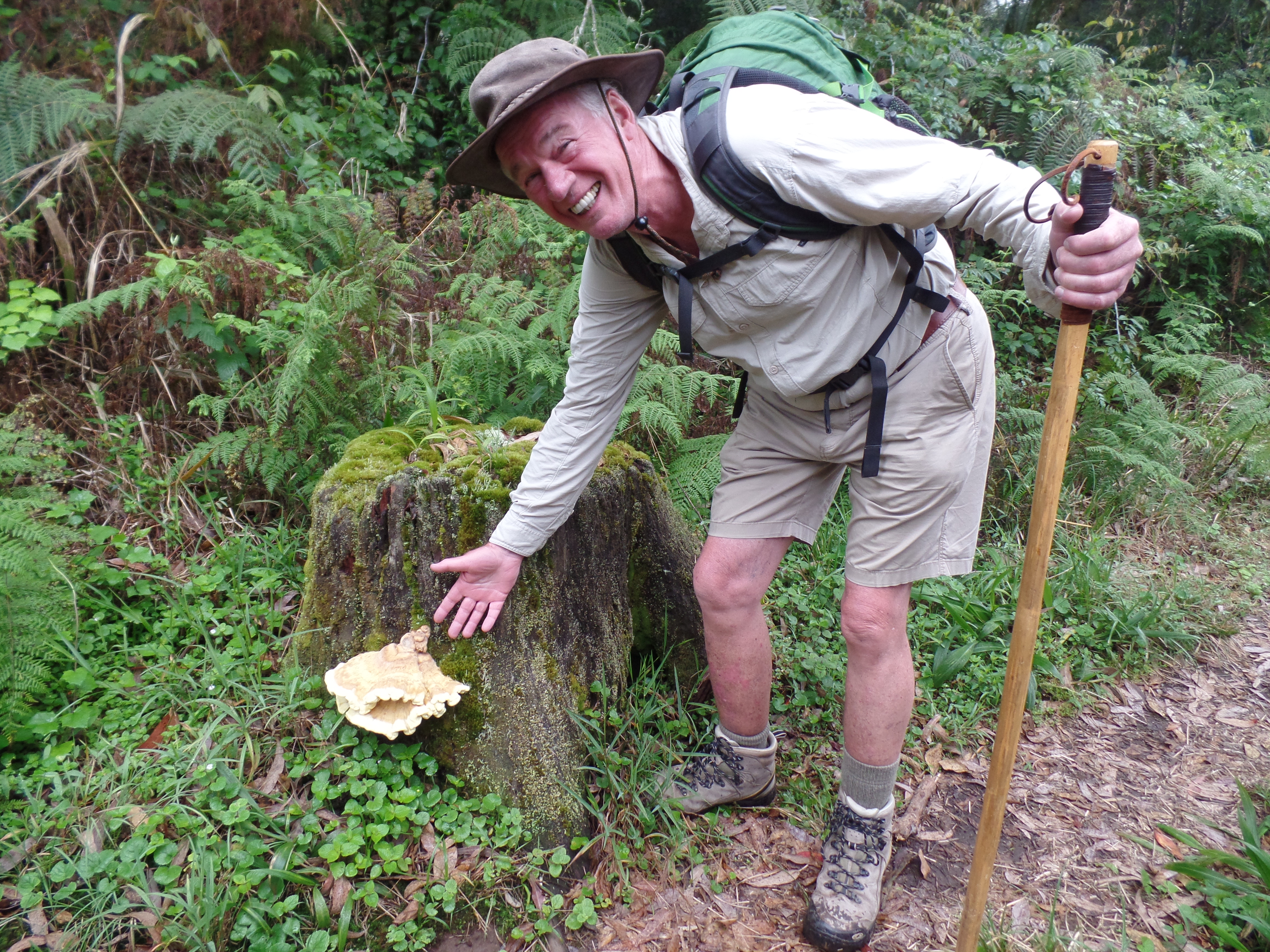 Is that a fungus or a fungi or perhaps an extraterresterial?

This was only the start of the upheavals. The path was slippery and very undulating. Confounding everything was the lack of visibility due to the mist. As best as I could reckon, we were walking slightly north west. Then after several kilometres, the hiking path once again terminated at a forestry track. Again we could not find again additional footprints. With visibility still low, we stumbled onward. By now open dissention arose in the ranks. A palace revolt was imminent. The very first positive confirmation of our location was arriving at a forestry vehicle park, which I recalled from a previous hike. We were close to the Dap Naude dam. This was confirmed by requesting directions from a truck driver. Mutters erupted again when the short cuts that the driver had recommended became arduous.  Finally, once again on a marked hiking track, rebelleion subsided and a lunch break was called. It was just a matter of time until the Broederstroom hike hoved into view. 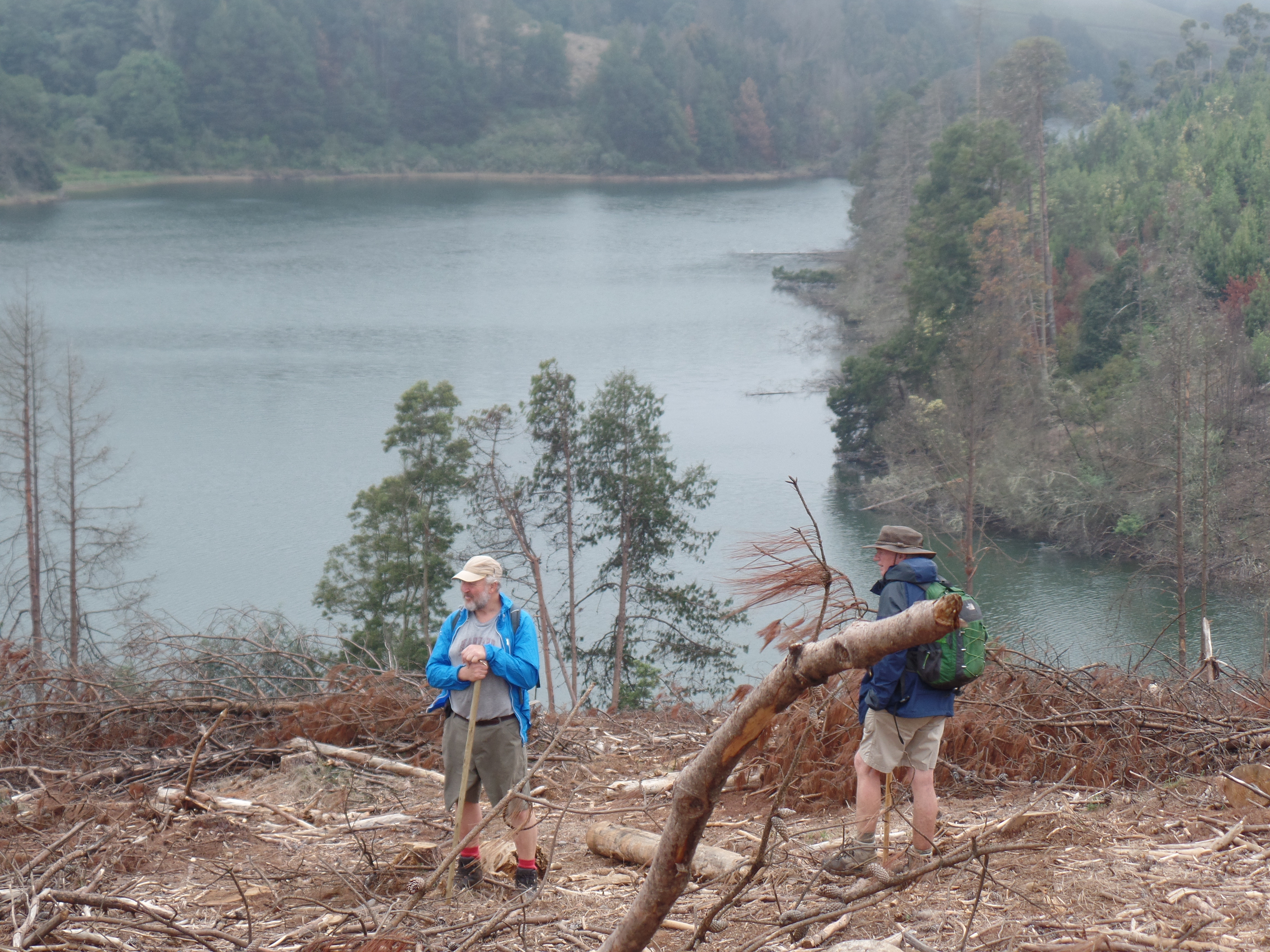 The less said the better. Suffice to say that we did not hike at all. 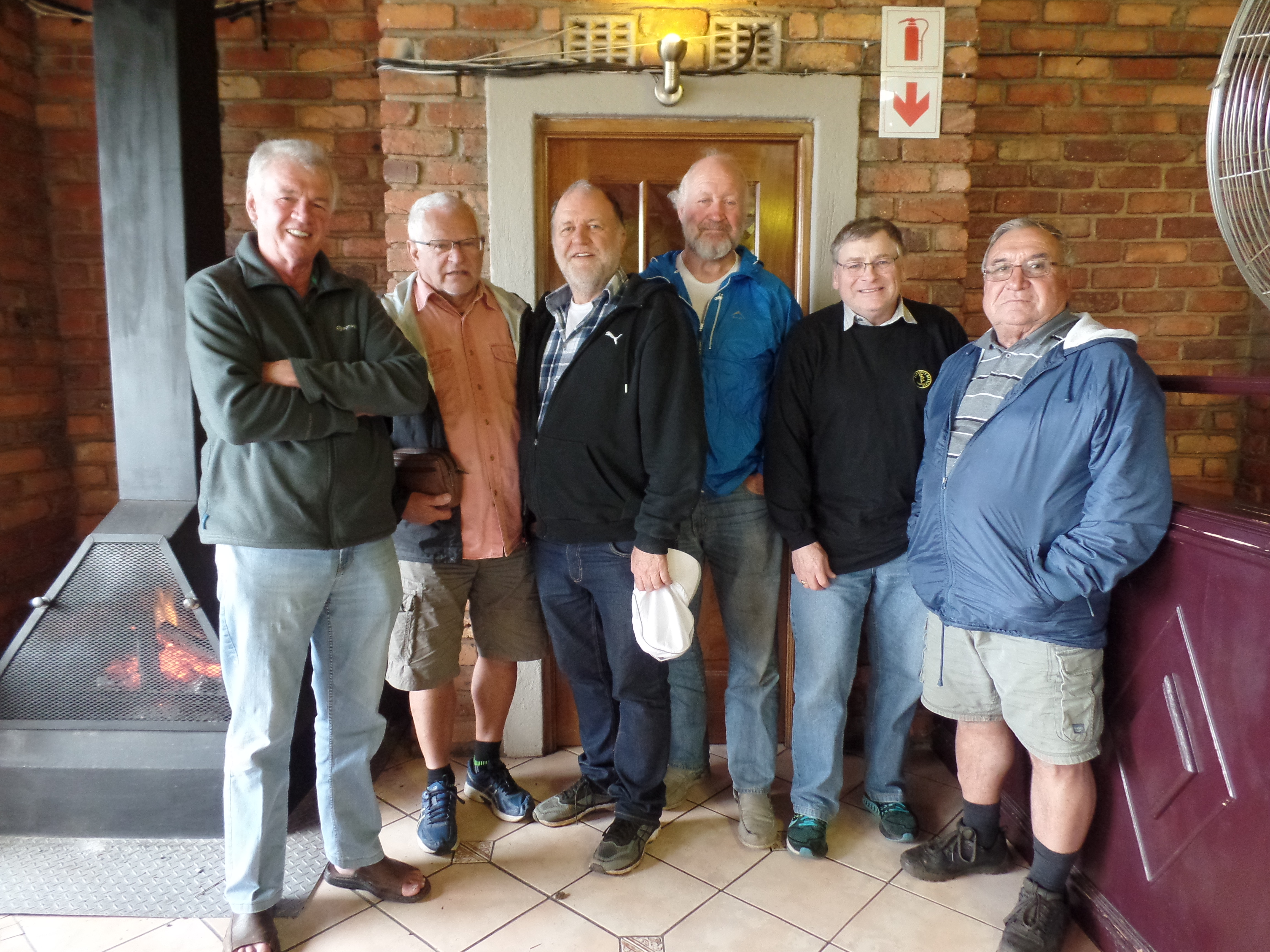