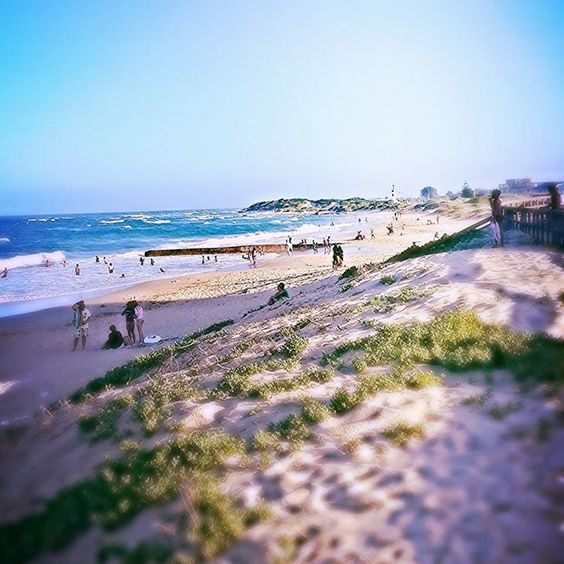 The word Pollok has created confusion in two ways; its spelling and whether it bore any link to the famous Port Elizabeth cricketers. One can swiftly discard any connection to the cricketing family as the beach was named Pollok decades before the cricketing pair rose to prominence.

If that is so, how did the name of this well-known beach in Summerstrand arise?

Prior to Pollok Beach

In the early 1800s, the area adjacent to the future Pollok Beach was known as Strandfontein after the name of the Farm. In 1815, Piet Retief with a keen eye on potential property bargains, obtained a grant of this land. It extended from Shark River in Happy Valley all the way to Cape Recife  and two miles  inland and included the site of the Humewood Golf Course. JJ Redgrave describes this land as “nothing more than a collection of arid sandhills interspersed with dense scrub and boulders but that did not appear to dampen his spirits, for he soon erected a fairly comfortable homestead presumed to have stood on the site of the present Beach Hotel”.

There was little to recommend this property. Personally knowing this area, the words, “This cannot end well,” come to mind. This property with its shifting sandhills and its windswept arid soil, was ill-suited to farming. Being a property speculator, the reality check on its potential growth in value, must have struck hard. Instinctively, he pursued an exit strategy and sold this “farm” together with a “garden plot” in North End to William Brooksby Frames. This extensive property was to remain undeveloped for another century.

As part of the opening up of the beach front in the late 19th century, areas were demarcated on Marine Drive on which only hotels could be constructed, otherwise the stand would revert back to the Government. The area opposite what was later named Pollok Beach, was the second site reserved for the construction on an hotel. The development of this site would take over 25 years as Summerstrand was totally undeveloped. In fact, for most of that period, development ceased at the Slipway, just past Shark River.

As development in the 1920s slowly commenced in Summerstrand, an owner-builder, Mr. J. Graham Wilson, took advantage of this stipulation, and constructed Hotel Pollok on the site. Being Glaswegian, Wilson spelt the word Pollok without a “c” which was the custom in Glasgow, his home town. This hotel was officially opened for business on the 28th October 1926. It was only now that the adjoining beach obtained its name from the hotel.

In March 1931 it was sold in Wilson’s insolvent estate, at which time it was leased to John Wynne and Co and S.A. Breweries. The hotel’s name was later changed to the Summerstrand Hotel and later on it was acquired by Mr. Slimonsky. It demolished in 1995 to make way for a townhouse development.

As far as I am aware, only one ship has run aground on this beach and that was on the 19th November 1937 when a steam coasting vessel “Outeniqua”, belonging to Thesen and Co, struck Roman Rock, being the seventh vessel to do so, and went aground opposite the Hotel Pollok. The skipper, Macdonald, had a reputation for rock hopping. In fact, the Outeniqua had gone aground 14 times in the past 16 years. The ship was towed to the harbour where an attempt was made to repair her using concrete, but she was condemned by the shipping authorities and eventually scrapped in 1950. She was built in 1915 in Norway.

Today a bell buoy clearly marks the spot off Summerstrand and can be seen on a clear day. Soon after the Outeniqua struck the rock on the 31st of the following month a deep-sea buoy was put in position over Roman Rock. It was provided with gas cylinders. an automatic light, fog bell, cast-iron sinker, a mushroom anchor and a 185-foot cable.

Apart from the hotel, Pollok beach has been famous for other things too. What brought it to prominence in the 1960s was surfing with the area eponymously known as “Pipe” being particularly prominent. The Road House and the life saving club also played their part in attracting people to the area.

Report in Die Burger, 19 Oct 2018 on the coaster Outeniqua

Report Back on the 2009 Outeniqua Trail Hike