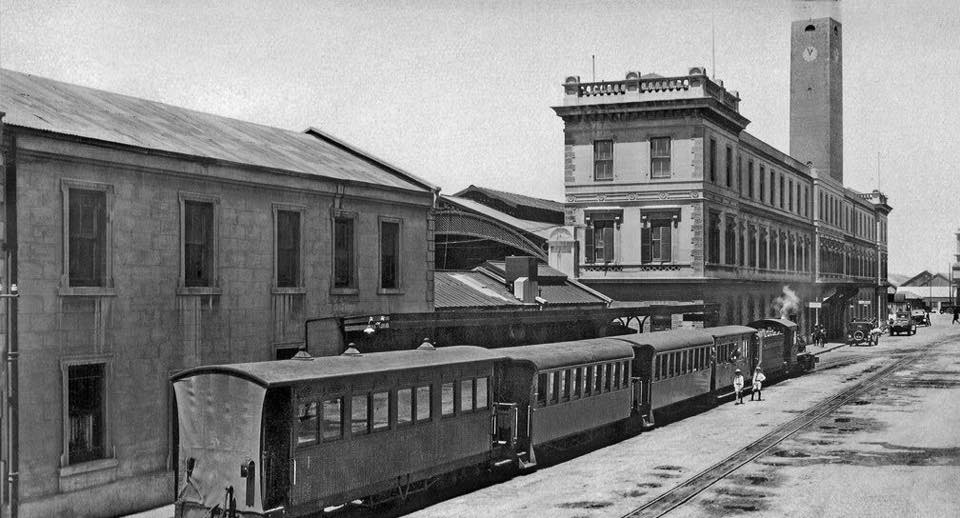 The Walmer Branch Line, as it was known, would only operate from December 1906 to 26th November 1928. During those 22 years, this narrow gauge train would wend its way through to Walmer from Station Road, parallel to Strand Street, in Port Elizabeth to 14th Avenue in Walmer via Humewood.

In this blog, Anthony Longworth provides his recollections of this iconic railway, how it operated and what route it took. For a detailed technical blog, go to ‘http://thecasualobserver.co.za/port-elizabeth-yore-narrow-gauge-walmer-branch-line/

Main picture: The terminus of the Walmer Branch Line

The terminus in Port Elizabeth was in Station Street outside the entrance to the main railway station. The steam engine with its passenger coaches and guard’s van occupied about the length of the present railway station building. There was a loop line to enable the engine to depart from the opposite end of the train from which it arrived.

There were no goods trucks but parcels etc. could be consigned to a person at a particular recognised stop. Prior arrangement had to be made for the receiving of the parcels otherwise they were merely dumped on the side of the rails by the conductor. It was quite fun walking along the line quizzing what was being sent to whom by whom. Also there was always a chance of helping with the delivery – for a small gratuity. Pocket money was hard to get in those days.

Passengers climbed into the train from the pavement level. Quite a  haul  up  for  senior citizens of whom there were many. Remember, there were no platforms at any of the places where passengers embarked or alighted. The pavement and kerb today at the railway station look no different to what they were yesterday. It all looks unchanged.

Some of the coaches had seats running full length of the coach on either side with an aisle down the centre. Others had seats with high backs across  the coach on either side, also with an aisle down the centre. These were more popular and usually occupied by adults facing each other. There were no compartments as such. All coaches were made of wood and varnished and had a special S.A.R. & H. disinfectant smell. On the outward journey, the guard’s van was always at the back and on the inward journey, it  was  behind  the engine at the front.

A blast on the whistle and off we go. Several more blasts and we cross Jetty Street heading south passing Fleming Street, across the bridge over the Baakens River and on to Humewood Station – better known to-day as the starting  point of  the Apple Express. This area  is the home of the narrow-gauge railway  to Avontuur of  which  the Walmer Train was a branch.

On leaving Humewood Road Station, the train continued on south and  then  turned  west across Humewood Road at the level crossing (to-day, this crossing is bridged) under Forest Hill Drive past the South End cemetery and on to Valley Junction almost opposite First Avenue, Walmer.

This was the junction for the Walmer Train to leave the main line and turn north into Second Avenue, Walmer and not First Avenue which is generally believed. After crossing Heugh Road, the train stopped outside two well-known and well-remembered houses-Manor Hastings and Talana. The former on the corner of Heugh  Road  and  the latter on the corner of Villiers Road. After the first stop in Walmer, the train turned west again  into  Villiers Road, with a normal stop at Third and Fourth Avenues  where  passengers  waiting  were picked up and others dropped off.

At Fifth Avenue, the train turned north again and continued along Fifth  Avenue to Water Road, where it turned west again and  continued  along Water Road to the end of  its journey at Fourteenth Avenue. Along Fifth Avenue, the train skirted  Wellington  Park and turned west at Armstrong’s Corner – I think named after the first owner of the first house on that corner.

The train stopped at virtually every intersection of a road with an avenue along its journey, once it was in Walmer. It never stopped in the centre of a block for the benefit of lazy passengers.

In Water Road, at Fourteenth Avenue, there was a loop line to enable the engine to change ends. This was always an interesting operation – watched very carefully by us kids. We thought the guard who changed the points was marvellous and – oh – so clever.

The sound of three blasts on the trains whistle was well known to all Walmer folk within hearing distance. With a south westerly wind  blowing ,  it  was amazing  how far the sound of the whistle actually carried.

The three shrill blasts heralded the departure of the train from the “TOP”, the name of the Fourteenth Avenue terminus known to all. To the potential early morning  passengers,  it ruined their day. They knew exactly what the time was and they could calculate in minutes and seconds exactly, the length of time they had to get from where they were to where they wanted to be in order to board the train. The staff on the train were marvellous and most co-operative. The engine driver knew how many passengers he picked up each day at each stop. If one was missing, the train driver slowed down. It was seldom anyone missed  the train. Contrary to the habits of most other railway operators – the train was always on time -it was the passengers who were late. The engine driver knew the culprits only too well.

Another  familiar  sound  was the almost continuous  blasts  from  the whistle – peep-peep-peep – nonstop for minutes. From us  kids, the cry rang out “donkeys  on  the line” and  we tried to locate the spot and  help chase on our bicycles.   Sometimes,  other animals were the culprits – oxen, cows, horses, pigs, goats. The streets of Walmer with their wide grass covered verges were popular grazing grounds for unherded animals. Water  Road  was no  exception.

Except for one or two more popular stops, there were no waiting rooms  to protect one from  the heat and /or rain. The Lych Gate at St John’s Church at Eighth Avenue was a popular resting place. Many of the kids of Walmer learnt smoking habits in this resting place. It also had seats .

Water Road – hence its name – was a water course from Fourteenth Avenue to Tin Pan Alley between Ninth and Eighth Avenues. It was this part I knew best. The soil was black and reeds, bull-rushes, Arum lilies and other types of similar water loving vegetation grew in abundance in the pools and water logged soil.

The route was the same both ways.

In 1928, the three shrill blasts at the “TOP” ceased, the donkeys had  the unhindered  use of the line and the residents of Walmer had to resort to other methods of transport to and from town.

Port Elizabeth of Yore: My Second Great Uncle’s Reminiscences of the 1870s

Port Elizabeth of Yore: Through the Eyes of the Poulter Family