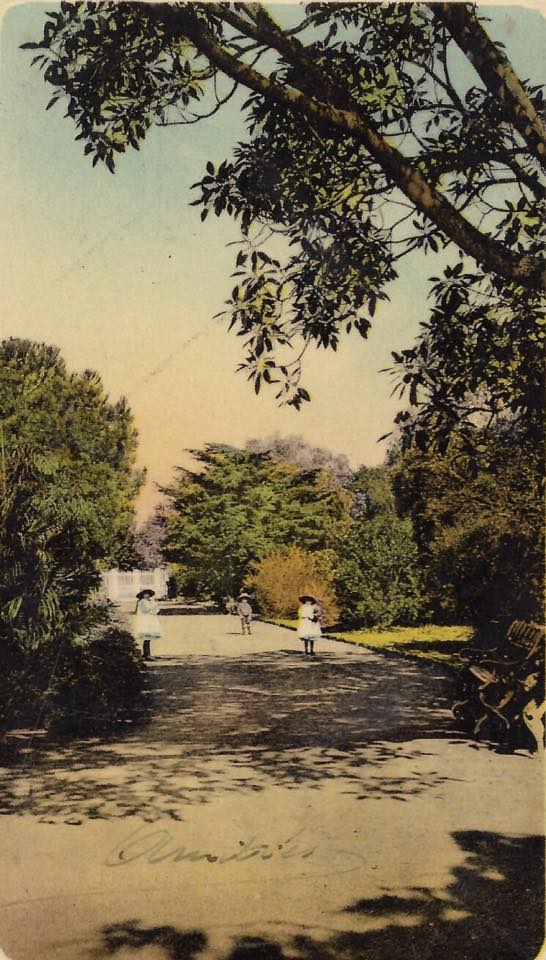 With the imminent arrival of spring, the whole of St. George’s Park will be blossoming. Perhaps we should spare a thought for the man who was originally employed to create a park out of a stretch of veld in the face of winds, drought and, for a long time, no reliable water supply. Established in 1860, St George’s Park is spread over 73 ha. Today it comprises pristine wooded parkland and extensive plant collections and specimen trees as well as various other amenities.

The creator of this splendid park was a Scot by the name of John Wilson.

Councillor Henry Pearson first proposed the idea of a park for Port Elizabeth. At that stage, the area was wind-swept and desolate. The first trees were planted in what was to become St. George’s Park by enthusiastic citizens in August 1861, the first anniversary of the visit by Prince Alfred to the town. The site of the Park, with the land surrounding it, was only formally granted to the Port Elizabeth Municipality by the Governor Sir Percy Wodehouse on the 23rd February 1864.

The plan drawn by a surveyor, Robert Pinchin, shows a large piece of what was then veld, including the existing Presbyterian cemetery, bounded by a carriage drive and large erven. Ab initio these were envisaged as “villa sites” which were not to be subdivided. Furthermore it was planned that substantial buildings, with their own large gardens, would one day grace the embryonic park and the whole town.

In 1882 readers of the Eastern Province Herald were also being reminded of the achievements of this dedicated and tenacious gardener. In August 1882 an ex-member of the Parks Committee wrote to the paper saying that he well remembered the establishment of the park in 1861 in honour of the visit of Prince Alfred the year before. “I recollect the circumstance well, and, like…..many others, ridiculed the idea of trying to form a park in such an exposed, bare, dry, and rocky flat. However, on this once bleak and barren place now stands the finest park and conservatory in the colony, and the question naturally arises ‘to whom are we chiefly indebted for this great boon?’ The writer refers to an article that had appeared in the Herald and continues, “The names given are certainly those of the originator and his associates in the first instance but their design would have been fruitless without the skill and energy of a thorough practical gardener, who was happily found in the person of Mr. John Wilson, whose name must always and firstly be connected with the formation and early growth of our St. George‘s Park. Unflinching patience and care were requisite to overcome the natural difficulties by which he was beset, and many a less persevering spirit would have abandoned the task in despair.“

The editor of the Herald replied in the next issue, thanking the writer for drawing special attention to the services of John Wilson and saying that they had had no intention of ignoring him. “In a few days, when the new Conservatory is opened, the public will have an opportunity of seeing Mr. Wilson‘s work, and will then be able to judge for themselves as to the manner in which his duties have been discharged. A more zealous or efficient public servant than the curator of St. George‘s Park is not to be found in the Colony. We hope he will long be spared to see the work now in progress flourish and extend”.

When the Conservatory was officially opened on 12 September, the Mayor, H.W. Pearson, reminded the assembled guests that the Public Gardens had been “formed from ground that was a few years ago a barren desolate place, but, by dint of the perseverance of the community of this town, in addition to the untiring industry of Mr. Wilson, they have arrived at their present perfection. For Mr. Wilson‘s constant attention to his duties they were indebted for what they saw around them, and Mr. Wilson, too, has enjoyed the reward of his long labours in seeing the result of his works.” The Mayor thanked him personally on behalf of the Town Council and of the people of Port Elizabeth for his labours.

John Wilson was an unassuming and unobtrusive man and information about him has therefore been elusive, but he has left a record of some of his work in his annual reports which were prepared for presentation to Parliament. This work included developing and maintaining Prince Alfred’s Park and a nursery to provide plants and trees for the town streets and squares and for exchange with botanical gardens in South Africa and overseas. Wilson was also an enthusiastic supporter of the Port Elizabeth Horticultural Society which held annual exhibitions to which he submitted many prize-winning entries. on the exhibition of February 1884, he displayed the only orchid – Cattleys Crispa.

On the 25th March 1889 John Wilson died aged 59 years and it is from his obituaries published in the Herald, Advertiser and Telegraph that we learn most about him. According to these he came to Port Elizabeth in 1861 from Rondebosch where he was gardener to Rev. John Fry, and it was at the instigation of R.W. Murray that he was chosen and sent here. Murray is presumably the same man who was for several years Secretary of the Cape of Good Hope Agricultural Society and was noted for his services to agriculture in the Colony, and that R.W. Murray who was editor of the Cape Argus and founder of the Eastern Star in Grahamstown in 1863.

Wilson lived on Hospital Hill to begin with and is listed as a gardener. Then in 1878 a house was built for him in the Park and about the same time he seems to have been given the official title of Superintendent of the Park.

The Herald stated that he had “converted every street in the residential part of this town into an avenue and made its gardens the wonder and admiration of every visitor“. His funeral was attended by two or three hundred people, including fellow-members of the Scottish Association. As a staunch Presbyterian, John Wilson was, most fittingly, buried in the Scotch cemetery in the park which he had created, and the Herald provided an epitaph: “one of the most useful citizens of Port Elizabeth.“

In 1905 improvements had been carried out at St George’s Park, chief of which is the macadamising of the main walk. This walk, commencing at the Bird Street entrance gate, extending to the superintendent’s house, and going off at right angles to Park Drive, immediately opposite Doncaster Road, was formerly a gravel path, but now that it has received a finished coating it will be both easier to maintain and more comfortable to traverse.

In 1907, the St Georges Park service reservoir was constructed. It would include a Memorial Fountain which would be painted. Experiments were carried out with the object of improving the basin jets. At that stage, the scheme had cost £296,217 16s 5d leaving a balance of £63,782 3s 7d on the loan.


Another alteration which greatly adds to the beauty of the park is the erection of a neat paling facing the main walk in the vicinity of the bowling green, in substitution of the bush which formerly has acted the part of a fence. Throughout the park several old trees have been pulled down and new ones planted, while various species of new plants have been introduced, all of which will add towards the general improvement of the park.

In the early days of Port Elizabeth, the St. Mary’s Cemetery was used for all burials, first by the military based at Fort Frederick, and later for civilians with the cemetery being under the control of St Mary’s Church.  As the town grew, more burial areas were required by the various Christian denominations and in the 1830’s and 1840’s the various churches were granted small pieces of land adjacent to each other on the edge of town where Russell Road is located today.  A further non-conformist cemetery, mainly for the Church of Scotland, was also set aside in 1854 on the western edge of town, which was later incorporated into the extensive St George’s Park.

In 1861, Mayor William Smith planted an Oak tree at the spot in the then new St Georges Park to commemorate the visit in 1860 of His Royal Highness Prince Alfred.  The tree unfortunately blew over in January 2001 with the original inscription then being moved to the Parks Division offices nearby.  Today the spot is marked by a plaque.