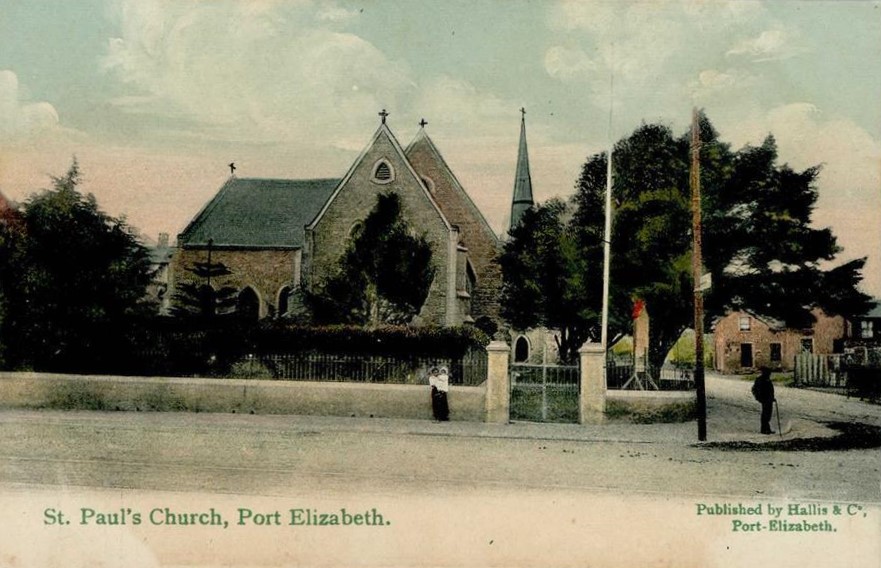 With the town rapidly expanding, the need for a 2nd Anglican Church in Port Elizabeth arose. During an age with neither public transport nor private motor vehicles, churches had to be located within walking distance of their congregants. During both of his visits in 1848 & 1850, Bishop Gray had pointed out the need for a church in North End with a capacity of 200 to 250 congregants to serve the needs of the local Anglicans. This church, he suggested, should be built on land offered by Mr Tee and Mr Korsten.

Sunday School was started in 1850, the first services for adults began in 1853, and the laying of the foundation stone of the original church took place in October 1854. Part of the early ministry of the parish was the establishment of a school in 1861.

The need of a second church and clergyman for the rapidly increasing town had long been felt. It had been pointed out by Bishop Gray, at his first visitation in 1848, and again at his second visit in August 1850, when several of the more earnest members of the church agreed with him that an effort should be made to procure the erection of a church at the North End.

Central to its construction, was the need to raise funds and then secondly to appoint a clergyman. Contrary to expectations, a substantial portion of the funds were raised or pledged. Without it sounding too blunt and matter-of-matter, Bishop Gray simultaneously requested a clergyman and explained the situation. “No man would be too good, but there is nothing to tempt any one. A new district Parish out of a colonial sea port, with no stipend except what will arise from the Offertory,” being the offering or collection of money made at a religious service.

The primary reason for his 1850 visit was to consecrate St. Mary’s Church as well as the Cemetery. Besides this, he issued a Pastoral letter to the Church people of Port Elizabeth, in which he proposed a plan for building a second church and having a second clergyman at Port Elizabeth. He therefore addressed a letter to the members of the church, which was printed and circulated through the parish, guaranteeing £400 (£250 from Miss Burdett Coutts and £50 from S.P.C.K.) towards the building, provided the inhabitants would raise before Christmas a sum of £500 to match it. He suggested that a church to contain 200 or 250 people should be built upon the land offered by Mr. Tee and Mr. Korsten, or such other site as might be deemed more desirable. The support of a clergyman for this church must be left to the freewill offerings of the people

The intended result of this Pastoral letter was the building of St. Paul’s Church, and the subsequent separation of St. Paul’s Parish from the Parish of St. Mary’s, which, as originally constituted, embraced the whole of the Civil Division of Port Elizabeth.

Before departing, Bishop Gray ensured that the project was well on its way. To this end he held a meeting, formed a Building Committee, chose a site, and raised £200. As he waved goodbye to Port Elizabeth, he must have been well pleased with his endeavours. His to-do list now had one less item to contend with.

Mr. Tee. established a Sunday School at North End on property which was possibly owned by himself as he did own property in the vicinity. On this property he erected a wooden building especially for use as a Sunday School.

On Bishop Gray’s return in November of that year, £500 was already pledged and a plan decided upon. The Bishop wrote to his commissary in England for a clergyman: “No man would be too good, but there is nothing to tempt anyone. A new district Parish out of a colonial seaport, with no stipend except what will arise from the Offertory; no church, school, or congregation; plenty of suspicion, jealousy, coldness, are no great baits.  But I feel assured that if the Pastor takes it, he will experience abundance of kindness, and rally round him a good body of churchmen before two years are over.“

The scheme did  not  progress very  rapidly  in  consequence of the objections on the part of the committee to the church being free and open; but in December 1851, Archdeacon Merriman met the committee, and at last they agreed to the Bishop’s views of erecting a church whose accommodation should be free, but the seats appropriated.

As a consequence, several members withdrew their subscriptions. Initially services  were  held in a long shed  or  barn on  the premises  of  Mr. Tee, in Queen Street, where Archdeacon Merriman gathered a small congregation together. He, together with the Rev. Joseph Wilson, was the most frequent officiating  minister  until the arrival in July 1854, of the Rev. Edwin Giles, M.A., of St. John’ s College, Oxford, who was appointed to the proposed new district. A convenient site for the church, at the junction of Cooper’s Kloof [Albany Road] and Queen Street, was generously given by Mrs. Korsten and Mr. Cooper, and preparations were made for laying the foundation stone by the Bishop when he should arrive.

Bishop Armstrong landed in Port Elizabeth on the 12th October 1854 and was presented by the Vestry of St. Mary’s with an address of welcome and congratulation. On St. Luke’s Day (October 18th), his Lordship laid the foundation stone of St. Paul’s Church, at which ceremony the Rev. Canon Mullins, who had recently come out from England as a candidate for Holy Orders, was present. Sophy Gray, the wife of the Bishop, designed the building. The first ministers were Rev Edwin Giles (1854-1856), and Rev Edward Pickering (1857-1858).

During October 1854, St. Mary resolved that the offertory of one Sunday in each month for six months should be devoted to the building of St. Paul’s

On Saturday, 30th August 1856, the Metropolitan consecrated St. Paul’s Church, though the building was far from being completed, and was, besides, heavily in debt. Miss Burdett Coutts had generously given £500, and Mr. John Owen Smith gave the teakwood principals for the roof, but the windows had not arrived from England, and calico supplied the place of glass. The inside walls were not plastered, and a few forms here and there formed the only seating accommodation. But great care had been taken that such furniture as could be obtained was of the best quality and workmanship. The Bishop of Cape Town gave a handsome altar frontal; the teakwood altar rails, prayer desk, and pulpit were given by Mr. Giles’ friends in England, while he himself gave a set of silver gilt altar vessels, and the marble font, besides collecting the sum of £389.  The acting Incumbent of St. Paul’s from April 1856, until May 1857, was the Rev. W. H. L. Johnson, who had come out for the missions in Kaffraria, but was detained at Port Elizabeth to fill the vacancy caused by Mr. Giles’ departure.

When Mr. Brook was appointed to St. Paul’s, there was still a debt of between £500 and £600 upon the building, and there was yet much to be done to make the interior decent, the walls were not plastered and there was only a temporary porch.  But in the course of a few years the steadily increasing congregation had paid off the debt, added a porch, tower, and spire to the church, and provided an organ. A little later, schools for boys, girls, and infants were built at a cost of £1200, and a house bought for a parsonage. Mission work, too, has not been neglected, and there are now two mission curacies in the parish, St. Philips’ for the coloureds, with services in Dutch and English, and St. Stephen’s with services in Xhosa.

During the 1950s, there was inexorable pressure for the church to be relocated. The reasons for this proposed move were the decreasing population around the old church, the expropriation that was to accompany the widening of Main Street as well as the deterioration of the buildings. In 1960, the move finally occurred.

The present Church reflects the continuity of witness over more than 150 years, in the magnificent stained glass windows, the pulpit, lectern and other items transferred from the original church. These are now housed in a modern building, a feature of which is the Chapel. One side of the chapel is glassed in, enabling the congregation, while they are at worship, to look out over the beautiful parish gardens.

The original St. Paul’s Church was located at the bottom of Albany road where BM Cotton building is now. There was a tiny little school next to it and also a trough for horses to drink water.