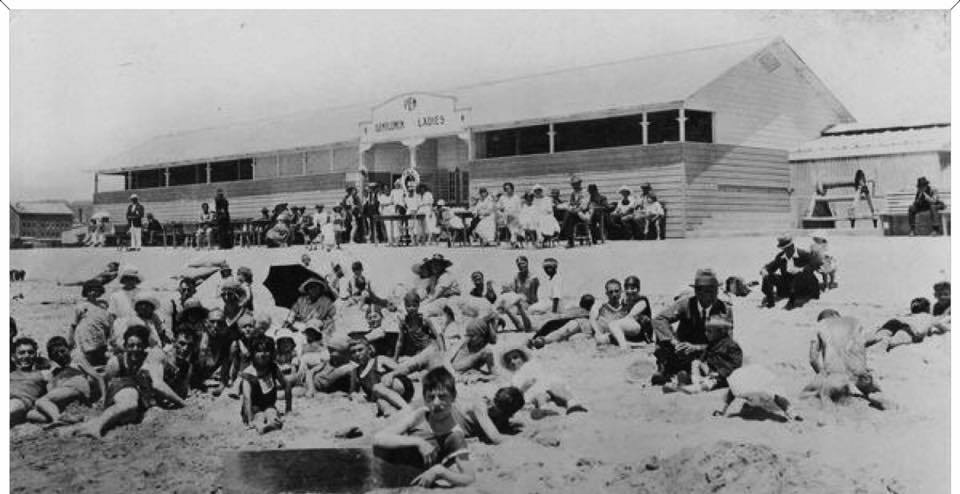 The wide sandy beaches that once spread from the North Jetty, next to the landing beach, and continued all the way past the mouth of the Papenkuils River have long since been destroyed by progress. In this case its nemesis was the dual events being the advent of the railways and the harbour works. In essence, the desecration of this natural wonder was due to two man-made causes. The hinderance in the flow of sand due to the harbour works, resulting in the erosion of the beach, allowed the railways authorities to obtain the right to use these once pristine beaches for the laying of additional railway tracks. This option suited their purposes as it was cheaper than the expropriation of buildings close to the shore on which to lay these tracks.

In old reports the curve of the Bay towards North End is often referred to as the “bight”, an Old English word.

Use for recreational purposes

Being close to the residential areas in North End, it can safely be assumed that these beaches must have been used for recreational purposes shortly after people first resided in this area. This would have been decades prior to the opening of Humewood and its beaches. Moreover, at some point after the first use of the beach, some form of bathing house must have been built, probably wooden, but when this occurred cannot be established. However, what can be established is that during October 1916, a new bathing house was brought into use. Due to lack of foresight and planning, this building was found to be too close to the sea and could be damaged by high tides.

According to Margaret Harradine, on the 22nd March 1922 a new bathing house and cafe at the North End beach were opened. Probably due to the proximity to the residential area, this beach was very popular over the years, but it did possess an Achilles heel. Ever since the commencement of the harbour works, the depositing of sand had been hindered and there was constant erosion of the beach. Finally as predicted in 1916, the old bathing house and esplanade were broken up by rough seas.

In 1935 the buildings were declared redundant and, only three years later in 1938, the beach was closed and the buildings taken over by the Traffic Department. It was only a matter of time before this beach was ultimately closed for bathing. The axe finally fell on the 30th June 1937 when the North End beach was closed as a bathing centre with the bathing house being converted for use by the Traffic Department.

It was the infrequent but deadly south-easter wind which wreaked the most havoc. Due to the wind direction, ships with inadequate mooring ropes, were prone to be driven into the bight generating plenty of spectator value for a town starved of entertainment. The dangerous period was a window from October to December each year. Harradine records the most notable occurrences as follows:

South-east gales caused 10 vessels to be wrecked on the North End beach.

During a south-east gale nine vessels were wrecked on the North End beach. The ships were: “Andreas Riis”, “Dorthea”, “Wolseley”, “Drei Emmas”, “Elizabeth Stevens” “Jane Harvey”, “Lada”, “Natal”, “C. Boschetto”. The Rocket Brigade, life-boat and crews of other ships assisted and only one drowning, a member of the life-boat crew, occurred. William Alcock used his limelight apparatus to provide light for the Rocket Brigade thus enabling them to rescue the crew of “C. Boschetto”.

The steel screw steamer “Queen Victoria” struck Thunderbolt Reef as she was coming into the Bay. She was beached off Humewood then, to make it easier to continue with repairs, in August she was moved towards North End to an area clear of shipping, but she was soon found to be in distress and had to be beached. During the 1902 gale several ships struck the hulk and were themselves wrecked.

The Great Gale. In a wind of hurricane strength 21 vessels either came ashore or disappeared along the North End beach and a number of lighters were lost as well. The ships were: iron ships “Inchcape Rock”, “Oakworth” and “Cavalieri Michele Russo”, wooden barques “Agostino Rombo”, “Constant”, “Sayre” and “Content”, iron barques “Arnold”, “Nautilus”, “Hans Wagner”, “Coriolanus”, “Emmanuel”, “Waimea” and “Limari”. iron schooner “Hermanos”, barquentines “Thekla” and “Iris”, SS “Clara”, schooner “Gabrielle” as well as the tug “Countess of Carnarvon” and the steam lighter “Scotia”. A few ships were re-floated. Those who were drowned, seamen and rescuers, were given a public funeral and buried in the South End cemetery where a memorial was erected to their memory. A Mayoral Relief Fund was set up and numerous fund-raising functions arranged.

6 sailing ships went ashore on the North End beach during a south-east gale – “Wayfarer”, “County of Pembroke”, “Two Brothers”, “San Antonio”, “Eldo” and “Arranmore”. Port Elizabeth has often been referred to as the “Windy City1‘, but research at different times has shown that Cape Agulhas, Beaufort West, East London and Cape Town are all windier and each of the first three could claim the title.

Even prior to the arrival of the 1820 Settlers, this beach had been utilised for this purpose. The initial entrepreneur who took advantage of this resource for commercial purposes was the Dutchman, Frederick Korsten. The whales would be intercepted after they entered the Bay and then, after harpooning,  would be dragged to North End Beach for extracting the oil.

In August 1899 an explosives jetty was put into operation at the Creek. This comprised a landing stage and an aerial tramway 105 feet by 36 feet and was in close proximity to the group of magazines owned by various companies and already in existence – up till then the explosives were landed by boat. The jetty does not seem to have been entirely successful and it was dismantled after the First World War, the sea finally removing the remains.


Use as a landing beach

During May 1862 the Algoa Bay Landing and Shipping Company was formed to land cargo on the North End beach. The first Chairman was Nathaniel Adler. Their proposal was to use this beach as an alternative to the traditional landing beaches between the North Jetty and the mouth of the Baakens River.

Port Elizabeth of Yore: Reminiscences of the Early Days