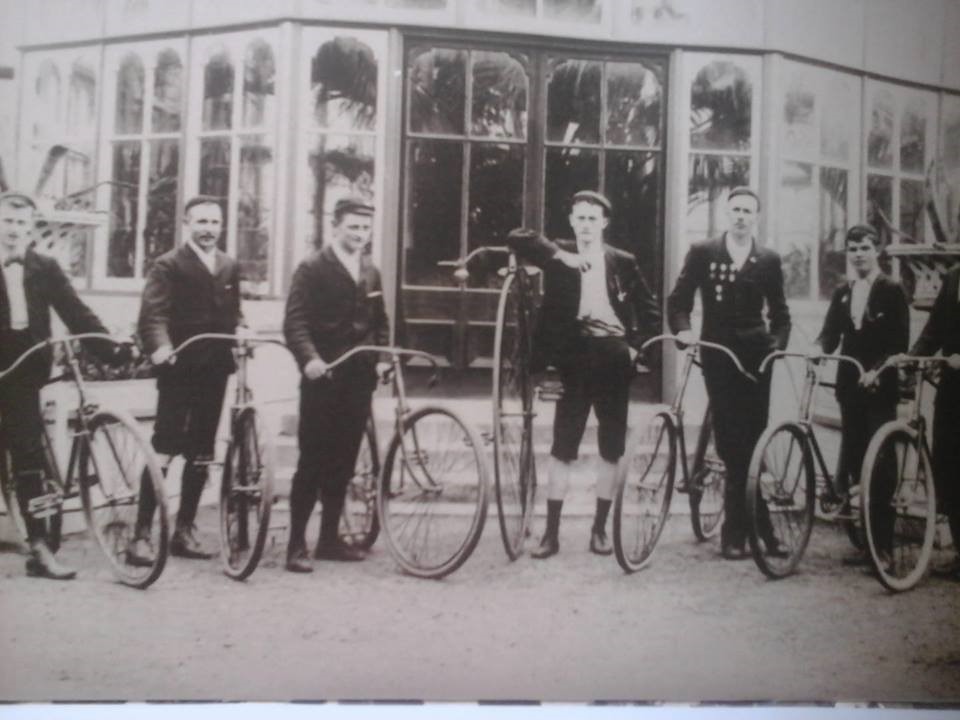 John Howard, an American cyclist, once quipped: “The bicycle is a curious vehicle. Its passenger is its engine.” As an epigram, a wit could have rejoined that 2nd class cycling is better than 1st class walking. Surprisingly in an era post the advent of bicycles but prior to the arrival of motor vehicles, photos of cyclists are rare; so rare that I only possess two.

If social cycling did not prosper, competitive cycling did with cycling Clubs soon being formed. From curiosity value in the Penny-Farthing, bicycles evolved into more practical machines.

Main picture: Members of the P.E. Amateur Bicycle Club, which was formed in 1881 and later amalgamated with the Amateur Athletic Club, in front of the Pearson Conservatory in St. Georges Park. A penny-farthing can be seen in the centre. Some of the club’s rides were from the park to Fitch’s at Witteklip which represented a 26 mile ride.

The initial developments in any new field do not necessarily meet the requirements of practicality. So it was with cycling. The first version of a bicycle can only be regarded as an intermediary step. Constructed almost entirely of wood, the draisine weighed 22 kg (48 pounds), had brass bushings within the wheel bearings, iron shod wheels, a rear-wheel brake and 152 mm (6 inches) of trail of the front-wheel for a self-centering caster effect. This design was welcomed by mechanically minded men daring to balance, and several thousand copies were built and used, primarily in Western Europe and in North America. Its popularity rapidly faded when, partly due to increasing numbers of accidents, some city authorities began to prohibit its use. However, in 1866 Paris a Chinese visitor named Bin Chun could still observe foot-pushed velocipedes.

The concept was picked up by a number of British cartwrights; the most notable was Denis Johnson of London announcing in late 1818 that he would sell an improved model. New names were introduced when Johnson patented his machine “pedestrian curricle” or “velocipede,” but the public preferred nicknames like “hobby-horse,” after the children’s toy or, worse still, “dandyhorse,” after the foppish men who often rode them. Johnson’s machine was an improvement on Drais’s, being notably more elegant: his wooden frame had a serpentine shape instead of Drais’s straight one, allowing the use of larger wheels without raising the rider’s seat, but was still the same design.

The first mechanically propelled two-wheel vehicle is believed by some to have been built by Kirkpatrick Macmillan, a Scottish blacksmith, in 1839. A nephew later claimed that his uncle developed a rear-wheel drive design using mid-mounted treadles connected by rods to a rear crank, similar to the transmission of a steam locomotive.

1853 witnessed the invention of the first modern bicycle, the “Tret-kurbelfahrrad” by Philipp Moritz Fischer. Once again Germany was the centre of innovation, when Philipp Moritz Fischer, who had used the Draisine since he was 9 years old for going to school, invented the very first bicycle with pedals.

Bicycle historian David V. Herlihy documents that Lallement claimed to have created the pedal bicycle in Paris in 1863. He had seen someone riding a draisine in 1862 then originally came up with the idea to add pedals to it. It is a fact that he filed the earliest and only patent for a pedal-driven bicycle, in the US in 1866. Lallement’s patent drawing shows a machine which looks exactly like Johnson’s draisine, but with the pedals and rotary cranks attached to the front wheel hub, and a thin piece of iron over the top of the frame to act as a spring supporting the seat, for a slightly more comfortable ride.

The bicycle arrives in South Africa

The first cycling club in Southern Africa, the Port Elizabeth Bicycle Club, was founded in October 1881, while the South African Amateur Cycling Union was founded in 1892 in Johannesburg. On 9 Sept. 1893 the first South African championships were held in Johannesburg, and in the same year the first world championships. Cycling prospered particularly on the Witwatersrand. Lourens Meintjes, who used the first racing bicycle fitted with pneumatic tyres in Johannesburg, achieved high honours in 1893 in Europe and the U.S.A. Many types of races were held, one being the ‘Wacht-een-Beetje’. In 1897 the S.A. Cycling Union consisted of 39 affiliated clubs. Every city and even small towns like Paarl had or were constructing a cycling track. In the same year the Cape Town firm of Donald Menzies & Co. manufactured the Springbuck cycle. This is the first reference to the Springbok in South African sport. In 1905 the S.A. Cycling Union and the S.A. Athletic Union merged and the S.A. Amateur Athletic and Cycling Association was formed. This singular ‘marriage’ was dissolved in 1958 after 53 years of fruitful co-operation. Since then cycling has been controlled by the S.A. Amateur Cycling Federation.

Nothing is known about the exact date when bicycles were first introduced into Port Elizabeth, but one can safely assume that it would have been after the creation of the first pedal powered cycle in the mid-1860s.

Port Elizabeth was not slow off the mark in establishing its first cycling club which was in fact the first cycling club in Southern Africa.  The Port Elizabeth Bicycle Club, as it was known, was founded on the 12th October 1881. The first Captain was Charles Hallack and the first meeting took place on Saturday 22nd October when members rode 26 miles from the cemetery gate in Park Drive, to Fitch’s at Witteklip, returning the following day.

At best only some of the cycling on the town roads could be considered today as “road” races in the contemporary sense. Potholes abounded. Stones and rocks were awaiting the inattentive and wary cyclist. Imagine the road to Witteklip located near Van Stadens. It would have been more suitable for today’s mountain bikes that “street” bikes. As an additional impediment, the old Cape Road was blocked with farm gates every few miles

So when  Charles Hallack and Frank C. Girdlestone announced their intention to astonished club members that they intended to cycle the 700 miles to Cape Town on penny-farthing bicycles in April 1885, a few must have declared them to be insane. For this endeavour they had chosen the 93 inch “Pilot” Light Roadster manufactured by Huckling of Maidenhead, England.

The Pilot Co. was founded in 1868 by H. J. Timberlake, trading as Timberlake and Co. He introduced a solid rubber tyre secured to the metal rim by a wire running through the centre of the tyre. He also invented the front wheel roller brake, operated by rack and pinion from a twisting handlebar. Later the business was acquired by Hickling and Co, and given by them as security to the rubber manufacturers who made tyres for them. In 1886 the goodwill was purchased by C. J. Reynolds, who carried on the business till 1900, when he closed down.

The “Pilot” was fitted with C. J. Reynolds’s triangulated system of spoking. This system was advertised as “The wheel of the future.” Notwithstanding the superlatives in the adverts, when the Reynolds triangulated wheel was recently tested, it was found to be too rigid and unyielding to be either speedy or comfortable.

Nothing could prepare the pair for 700 miles of rough untarred roads with the rigidity of the cycle adding to their distress. Even so, it was not plain sailing. Due of persistent rain and the heavy roads, some 150 miles had to be walked. The pair eventually reached their destination, Cape Town, on the 10th April 1885.

On 11th May 1895, the Club was amalgamated with the Athletic Club to form the Port Elizabeth Amateur Athletics  and Cycling Club with M.M. Loubser as President. The first sports meeting of the combined clubs took place on 6th  July 1895

What the Club lacked was proper facilities in which to practice. In July 1896 the Town Council agreed to a request from the P.E. Amateur Athletic and Cycling Club for the old dam at the top of Russell Road, which had become an unsightly nuisance, to be converted into a sports facility. On 10 May 1899 the Council acceded to their proposal and approved the plans. In July of that year, the foundation stone of the new facility was laid by J.F. Webb, CC & RM. The Club leased the grounds and the grand stand which were paid for by both the Council and the Club.

On the 1st November 1900, the new cycle track and athletic grounds at the Oval were officially handed over by the Municipality. For unknown reasons the Club closed in 1908 and the Municipality was compelled to take over the maintenance of the Oval. Fortunately for the Council, and ultimately the ratepayers, the Club was resuscitated in 1911.

On 6th May 1911, the re-formed P.E. Amateur Athletic and Cycling Club held its opening meeting at the Westbourne Oval. The Club had been revived early in the year with Harry Mosenthal as President, Lt-Col H.W. Court. H.J. Sherman and H.A. Phillips as Active Vice-Presidents and Sir Edgar Walton, James Searle, D.M. Brown, A. Fettes W.C. Scully and G.S. Whitehead as Honorary Vice-Presidents. The fine trophies of the former club were handed over by the trustees. The Wanderers Club was dissolved, and its members joined PEAACC. The Oval was gradually restored with the concrete rinking floor being removed and the cycle track repaired. After the 1914 S.A. Championships, the war brought an end to meetings, but fol­lowing an AGM on 12 May 1922, athletics began again. The Unity Club joined PEAACC, the name of the latter and the colours of the former being retained.

In 1933, the restoration of the ground for athletics and cycling began as it had to be ready by the 24th March 1934  for the South African Cycling Championships and the Empire Games Trials.

Subsequently the Council considered selling the Oval and it was also one of the sites favoured for a central swimming bath.

Per Mike Oettle, one year when his grandfather was a student in Cape Town, he only had sufficient money for a train ticket home to Port Elizabeth, but not for a return ticket. Knowing that his mother would pay the return fare, he decided to get home under his own steam, and rode his bicycle alone. This entailed, among other things, riding through the Langkloof on what barely qualified as a road.