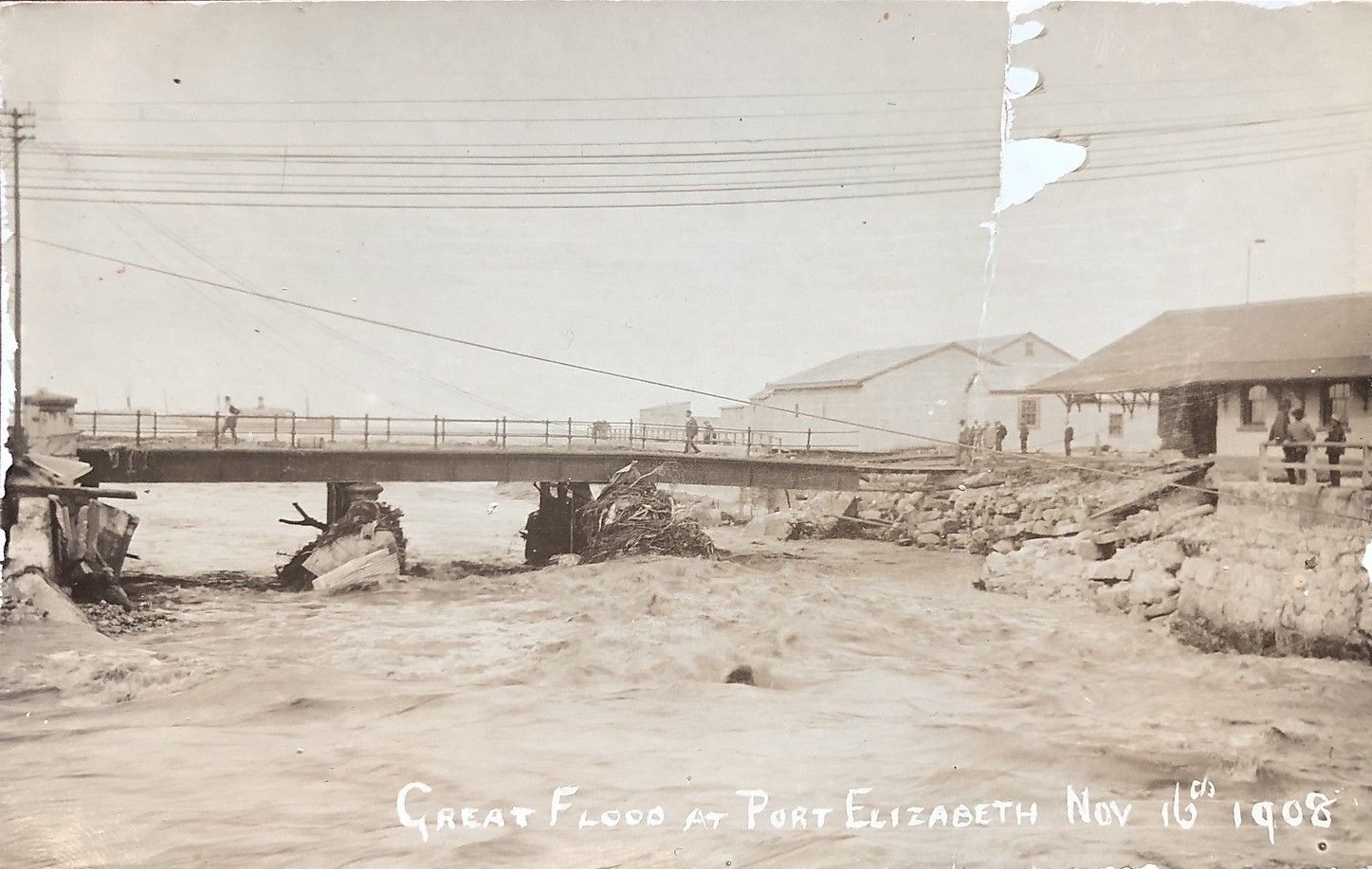 Port Elizabeth was renowned for its severe floods having experienced periodic flooding with the most notable being in 1867 and  1897. Previous river floods had caused little damage in the valley and around the mouth of the Baaken’s Valley as there were no buildings on the flood plain. But this time it was different. In the period subsequent to the previous floods, the lagoon had been systematically reclaimed and buildings had been injudiciously built on the flood plains. This was to exacerbate the effect of the flood waters.

The moniker for this catastrophe would forever be The Great Flood.

Main picture: Debris accumulated against the main bridge across the Baaken’s River forcing the water down Commerce Road to the Harbour Board building

On Monday 16th November 1908, the headwaters of the Baaken’s River in the Hunter’s Retreat area experienced a severe cloud burst causing the Baaken’s River to come down in flood. As this area is also the watershed of the Papenkuils River, some of the water also flowed down this river causing damage in the Cradock Place area as well.

According to J.J. Redgrave, in less than two hours the water had risen between twenty and thirty feet. By 10 o’clock this rivulet or stream, for it could not ordinarily be called a river, was some two hundred  yards wide and coming down in a solid sheet. The whole of Rufane Vale, as the area in the Baaken’s Valley from Fort Frederick to the sea was known, and the mouth of this once placid stream was transformed into an impassable sea of roiling turbulent muddy water twelve of fifteen feet deep. It carried all before it including those humans who had not expeditiously run for their lives, before this unstoppable wave of water engulfed them. As the angry flood water rushed in its haste to the sea, it swept all before it: thousands of bales of wool from the various wool washeries situated on the valley floor, carts and ploughs, uprooted trees, dead mules and sheep as well as flotsam of various descriptions. Wood and iron stores collapsed like matchwood with their contents being irresistibly borne on an uninvited journey to the sea.

Damage to buildings in the valley

What follows is a verbatim extract from the book, Port Elizabeth in Bygone Days.

“The wool stores of Messrs. Lane & Co were submerged, and the water rushed through Mangold’s premises and the wholesale department of Messrs. E.C. Gardner. A store belonging to the P.E. Wine Association was brought down and hundreds of barrels, full and empty, floated away, mingling promiscuously with ploughs and cases from Mosenthal’s hardware store. The engine room of the Electric Tramway Power House was flooded and the fires extinguished, resulting in the total stoppage of the tram system in the town. Rodwell’s brick store collapsed with a terrible crash, and the walls of the S.A. Export Co’s building were undermined and caved in. The Municipal stables were washed out and five mules swept away together with the new Municipal Ambulance and a number of carts. Such was the height of the water that one of the animals was lifted onto the roof of the building, where it stood patiently until the water subsided and help arrived. The others were all drowned.

The valley road bridge was the first structures to go. A large portion of the debris was carried on until it reached the main bridge connecting the centre of the town with South End. Here its further progress was checked by the piles supporting the structure and here it accumulated. This accumulation, combined with the falling of the old Model Dairy on the banks of the river at the premises, had the effect of diverting the water from its proper channel. Just at this moment, the water came down with increased volume. It rose by six feet in five minutes, and burst over the bridge in huge waves, snapping off and carrying away a large portion of the solid iron rail. From here it rushed along North Union Street and Commerce Street in a wall breast high and emptied itself into the sea over the bottom of Jetty Street. For the time being, Commerce Street became a river, carrying ruin before it. The ground floors of all the wool stores on the lower side of North Union Street (Messrs. A. Mosenthal and J. Daverin) were under water and in the old Harbour Board offices at the bottom of Fleming Street, the mark on the wall when the stream passed, was five foot from the ground. The reclaimed ground, commonly known as the “Harbour Board” was like a veritable sea“.

Even though the 16th November 1908 was a Monday and hence  a working day, this did not preclude the townsfolk from treating it as a carnival. This is what Redgrave reports on the excitement after the downpour ceased.

“The inundation subsided almost as quickly as it arose. About 2 o’clock, the rain ceased suddenly, the clouds dispersed, and the sun came out in all its splendour and a glorious afternoon followed. Hundreds of people came down town sightseeing, and these combined with the gangs of natives engaged in salvage work and officials directing operations, gave the place an unusually animated appearance. Several enterprising firms of livery contractors had busses and wagonettes plying from Market Square to various points of interest about the town.

Some idea of the force of the flood could be gained from the fact that prickly pear bushes, carried down from the upper reaches of the Baaken’s River, were scattered all over the Harbour Board ground, and even appeared on the North Jetty.

A large dead whale was washed up near Victoria Quay and came in for a large share of attention. Business people in the vicinity of Strand Street experienced much inconvenience from the unpleasant odour exhaled by the inanimate carcase of the mighty monster”.

The human dimension is the aspect of these disasters that piques the interest of many readers. In this instance, there were two men who experienced hair-raisingly close shaves which in all probability defined them for the rest of their lives.

The first narrow escape was by a Mr John L. Young who worked for the Port Elizabeth Cold Storage Company just off Slater and Attree Roads in North End. These buildings had been built in 1902 and as their name implies, they offered cold storage facilities. Being the first such facility in Port Elizabeth, they opened up the possibility of the availability of perishable food in the town. On this Monday, Mr Young was at the old Model Dairy which operated as a cold storage concern in Baaken’s Valley. While Young was with a Mr. Black at the time of the flood, the water rose so rapidly that their means of escape was cut off. According to Redgrave, “Young knocked a sheet of iron out of the gable and climbed onto the roof. Some fishermen threw Young a line to which they made fast a rope and this he hauled in to Mosenthal’s store, then under ten feet of water, by fishermen and two policemen.”

“Just before Young was hauled away, his partner Black called out ‘good-bye’ and took to the water on a large plank. He was a good swimmer and managed to steer his plank close to the bank above the bridge, where he was hauled out by a Mr. E.C. Moore.” Upon inspection, he was noticed to have been seriously knocked about by the floating debris. Initially he was taken to Willett’s chemist shop at the foot of Pier Street, where he was attended by Dr. Leith. After spending some time at the Walmer Road Hotel, he was transferred to hospital on Richmond Hill.

Mr Young would ultimately start his own cold storage facility in the North End area under the eponymous name of J.L Young & Co.

Thousands of bales of wool, mohair, skins and cases of spirits were washed out to sea. Ultimately  large numbers of them were washed up on North End beach where the police were kept busy in the evenings arresting and incarcerating intoxicated Mfengus. It was a free-for-all with vagabonds and freebooters of all descriptions. Myriads of them were caught red-handed broaching (or piercing) the casks in order to draw out the liquid, caught with bottles of whiskey in their possession or else paralytically drunk.

In fact, it was a case of making hay while the sun shone with people from all race groups being found in possession of spoils from their salvage operations.

The Herald of week ending January 16, 1909 reported that “At the weekly meeting of the Town Council the Engineer reported that pending a further consideration of the question as to what is to be done at Anderson’s Sweet Factory in the way of bridge accommodation, nothing has been done beyond the clearing of the river bed. This proved an extremely heavy work as there was a very large mass of timber, iron girders, masses of concrete, etc. A gang of selected white men was engaged on this work, which was completed before Christmas. Immediately after the flood, he laid a pathway of deals across the river from Bridge Street to Brickmakers’ Kloof.

It was resolved to recommend that the Engineer reconstruct the iron bridge at the foot of Bridge Street, and that a crossing be made at Anderson’s Sweet Factory similar to the one in Target Kloof. The Engineer reported that the bridge at Quarry had been recovered from the river, straightened and rebuilt. He further reported that from Brickmakers’ Kloof downwards, hundreds of loads of debris have been removed, and the depot has also been to some extent cleaned up.

On the 19 December 1908, the Herald reported that “It is interesting to note that yesterday the repairs to the Baaken’s River road bridge were completed, and it is now in a good state of repair as before the flood. The work was entrusted to Mr. T. W. Crage, of the James Street Iron Works, who has carried out his contract most satisfactorily. The necessary repairs to the cracked panel were effected with steel patch plates and rivets, and the new standards and panels were cast and machined at his workshops in James Street, and fitted in position. The weight of one panel is 1,050 lbs and serves to show the class of work that can be done in Port Elizabeth.

Recollections of J.L. Young’s travails by his grandson, Robert Gooseman of Schoenmakerskop

Various articles by Ivor Markman in the E.P. Herald on the centenary of this flood.

Port Elizabeth of Yore: In the Era of the 1837 Royal Engineer’s Map

Port Elizabeth of Yore: The 1908 Flood per the EP Herald

Port Elizabeth of Yore: The Tragedy of HMS Thunderbolt

Port Elizabeth of Yore: The Baakens from Pristine Lagoon to Commercial Area