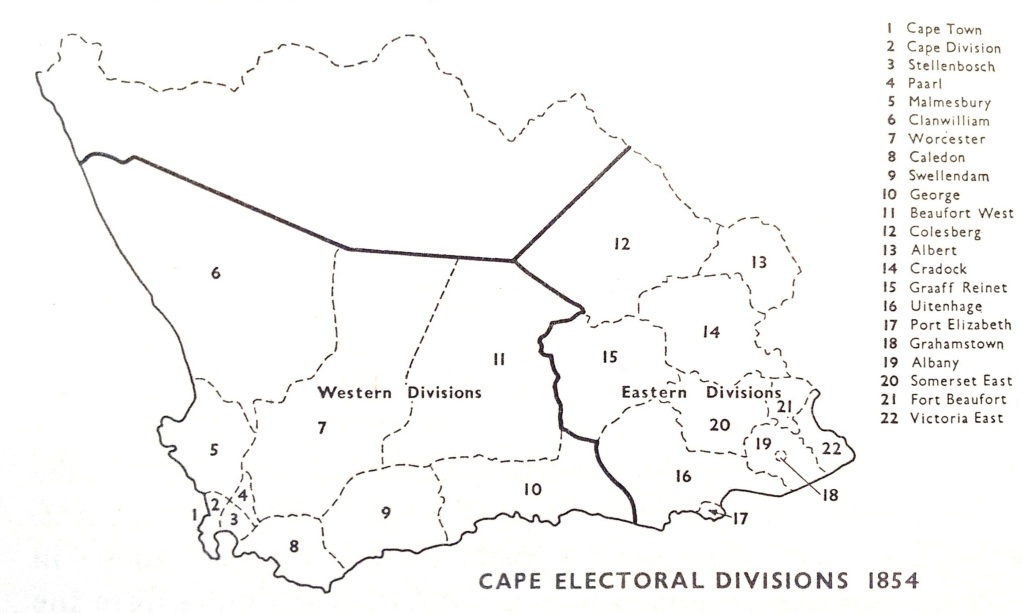 Almost ab initio, the Cape Colony was cleaved into two after the arrival of the 1820 Settlers. The Eastern Province separatism originated as early as 1823. The initial resentment which inspired separatism arose due to the British settlers’ demands for a greater military presence on the frontier. Within thirty years, this resentment was driven by a different set of concerns as the two regions differed in their demographics and their politics. However, the west-east division was not absolute until it was built into the structures of the Cape’s legislature with all the English majority areas being demarcated as being part of the Eastern Province. This was a prelude to the formation of the Eastern Province Separatist League which demanded greater autonomy for the Eastern Province as a separate Colony with its own capital.

Main picture: In 1854, the Cape Colony was split into 2 provinces comprising 22 districts

For much of the 19th century, the Cape Colony was divided into two main provinces the Western Province and the Eastern Province. These entities did not correspond to their modern equivalents – Western Cape and Eastern Cape provinces of South Africa. Instead they more controversially largely conformed to the demographic split of the Colony.

The local Dutch speaking inhabitants of the Western Cape might have been Doppelgängers of the Dutch in the Netherlands, yet after two centuries of separation it would be a profound mischaracterisation to equate these hardy locals as Dutch in their spoken language, outlook on life and their demeanour. Furthermore, intermarriage with the French Huguenots, slaves from the east and the khoikhoi maidens had sullied the pure Dutch blood of their forefathers.

The larger Western Province had a greater number of Afrikaans-speaking (Coloured and Cape Dutch) voters and was dominated by relatively liberal leaders who tended to favour a more inclusive political system for the colony and pushed for greater independence from Britain. Its commercial elite also had less material incentive to annex surrounding territory.

Wikipedia states that “The smaller Eastern Province was dominated by British frontier settlers who overall advocated a more “vigorous”, expansionist policy against the neighbouring independent Xhosa states, closer ties with the British Empire, and a more closed, restrictive version of the Cape Qualified Franchise, to prevent the anticipated political mobilisation of the – as yet largely voteless – Xhosa majority of the Eastern Province.”

In reality, rigid partisanship did not exist as several “eastern” leaders sided with the “liberal” west while several “western” leaders formed a powerful conservative minority in the west.

The first opening assembly of the Cape Parliament was held in Cape Town on the 1st July 1854. The Constitution Ordinance of 1853 established a Parliament in the Cape Colony with a Governor, Legislative Council and House of Assembly. Voters were men occupying fixed immovable property valued at £25 or receiving wages of £50 per annum. Port Elizabeth’s first representatives in the House were John Paterson and Henry Fancourt White after whom White’s Road had been named. It is noteworthy that there was no racial exclusion but voting eligibility was based upon a qualified franchise which allowed qualifying Coloureds to vote.

Apart from the differences in demographics between the different halves of the province, the concerns differed from their western brethren in that they hankered after eastward expansion, a greater imperial military presence and later on, higher franchise qualifications. Initially these concerns coalesced into a loose and informal alliance which advocated for a separate colony for the Eastern Province.

What aided and abetted divisiveness between east and west was the allocation of voting districts between the provinces. This allocation of seats largely conformed to the split between English and Dutch speaking populations.

A fragmented movement and province

Within three years of the establishment of the Parliament in 1854, the Separatist Movement fragmented due to conflicting interests of different towns and ideology.

These differences were manifold. Per Wikipedia they were firstly, …….. as to which town should be the future capital and seat of parliament for the proposed colony; smaller Eastern towns feared domination by either Port Elizabeth or Grahamstown (often even more than they resented Cape Town’s domination). Secondly, a region of the eastern province formed its own lobby which agitated for a separate “Midlands” colony. More importantly, subgroups of the Separatist League put forward other solutions to fight the perceived domination of the Western Province. One such group began a political struggle for a system of three parliaments – one for each province and then one overall parliament for the whole Cape Colony. Another group moderated their demands to merely asking that the current parliament be moved away from Cape Town, to a central location midway between east and west. Another smaller group pushed for parliament to rotate, between Port Elizabeth and Cape Town. While most of the movement continued in their separatist aims, these disagreements weakened the league. The separatists also faced opposition from the growing “responsible government” movement, which was based in the west and advocated greater independence for a united Cape.

Being riven by factions, they would coalesce and they re-divide. A more moderate faction was based in Port Elizabeth and its surrounding towns, where the English commercial elite was more concerned with infrastructure and the opening up of markets, than with the simple annexation of territory. At the other extreme was the Frontier Party or the Grahamstown Party led by Robert Godlonton who owned the Grahamstown Journal.

Opposing the separatists was the Afrikaans speaking Cape Dutch voters whose greatest support lay in the Graaff Reinet area. This faction under Andries Stockenstrom known eponymously as the Stokenstromites pressed for independence.

It was only in 1860 that an issue arose on which the various Eastern Cape factions concurred. This was the prelude to the formalisation of the movement as the “Separatist League” later that year. However the League supporters remained in a minority. The event which triggered unanimity was their opposition to a new tax on wool when the most powerful business owners in the Eastern Province’s wool industry united in opposition to this impost.

It was the arrival of Governor Edmund Wodehouse which was to upset the current dynamic as he offered imperial support to the division of the Cape into two Colonies and to scale back its legislative independence. Working in tandem with the sympathetic Governor, the Separatist League reached he apogee of its power. Port Elizabeth gained more political prominence as the League recognised Port Elizabeth’s importance by establishing an office in the town for its central committee under a permanent secretary, Dr W Way

During the brief period during which they operated as a relatively united front, they were successful in having Parliament convened in Grahamstown on the 27th April 1864. With the powerful assistance of the press, the League was able to dominate that year’s parliament. After Molteno rallied the Western Cape liberals, their majority ensured that this division was never institutionalised.

The fatal blow to the movement was the new Cape Prime Minister’s bill of 1874 to break up the two-way division of the Cape, into seven new Provinces (the large, uneven number 7 was specifically chosen to encourage fluidity of regional allegiance, to prevent either deadlock, or entrenched divisions). This “Seven Circles Act” removed the political division which had sustained the separatist movement and made its continued existence unsustainable.

Furthermore, rising prosperity in the early 1870s led to a decline in the separatist movement’s support. Divisions also arose again, between the main towns of the eastern province.

Unbeknown to both provinces, lurking in the background in the London Colonial Office was a plan to bring all the states of southern Africa into a single, British-controlled Confederation. On behalf of the British government, Froude, an Imperial Emissary, promised audiences in Port Elizabeth that if they supported the British Confederation Scheme, the eastern province would be reinstated and given its own colony status under Britain, within the planned confederation. The promise came to nothing however, as the Confederation attempt collapsed into wars.

Jul. 1              The first opening assembly of the Cape Parliament in Cape Town. The Constitution Ordinance of 1853 established a Parliament in the Cape Colony with a Governor, Legislative Council and House of Assembly. Voters were men occupying fixed immovable property valued at 25 pounds or receiving wages of 50 pounds per year. Port Elizabeth’s first representatives in the House were John Paterson and Henry Fancourt White.

Jan. 17           The foundation stone of the Grey Institute was laid by Capt. J.M. Hill on a public holiday commemorat­ing the fall of Sebastopol in the Crimean War. On 4 June Parliament passed Act no 6 of 1856 – “An Act for regulating the Public Schools of Port Elizabeth upon the Grey Foundation”. The Governor granted land to the west and north of the building to provide an income for the new school. Robert Archibald seems to have been the architect, though A.G. Warren prepared the working drawings. Management of the school was by a Board. Several of the streets in the Grey Institute lands are named after heroes of the Indian Mutiny of 1859 – Havelock, Whitlock, Clyde, Rose and Lawrence.

Jul.             The Port Elizabeth Incorporation Bill was passed by Parliament. This Bill gave P.E. the status of a Borough, which meant having a Mayor and Town Council elected by residents. The seven wards each had 3 Councillors, the first being elected on 11 December.

A columnist in the “Herald” wrote about the ice brought by “Sir George Grey”, which had soon melt­ed, but which had kept hotelier Wasley busy all day making “sherry cobblers”. The lack of ice was a regular complaint during the summers. In 1865 William Avery had a ten-year monopoly by Act of Parliament to supply ice between November and May, including Port Elizabeth, but he did not fulfill it. In October 1879 Herman Bell of Grahamstown was reported as having an imported ice machine mak­ing a ton a day, and it was hoped he would supply Port Elizabeth too.

Apr. 27          The opening of Parliament by Sir Philip Wodehouse, held on this occasion only, in Grahamstown.

Sep 2               Parliament passed a Private Act. requested by the Town Council, for constituting the Town of Port Elizabeth a Municipality. Act no 31 of I860 was repealed. The complete Act was published in the Government Gazette of 17 April 1868.

Dec. 29          John Hamilton Wicksteed arrived as Resident Engineer of the Van Stadens Water Scheme. During 1876 John Gamble, Hydraulic Engineer for the Colony and Consulting Engineer to the P.E. Municipality in the matter of the proposed scheme, decided that it was feasible to bring the water in pipes from a dam on the Van Stadens River. The necessary Water Bill had to be put before Parliament and an engineer had to be appointed before this most urgent work could begin. Wicksteed’s Dam is known as the Lower Van Stadens Dam. In 1885 Consulting and Hydraulic Engineer Thomas Stewart, designed a second storage dam upstream known as the Upper Van Stadens Dam. The town had again outgrown its water supply. The second dam was built by Dollery and Fettes between Sep 1891 and Nov 1893.

Dec. 31          In its annual report, presented to Parliament, the Harbour Board stated that its buildings to house the hydraulic power machinery to operate the cranes on the jetties was nearly completed. This structure, with its tall chimney was at the mouth of the Baakens River. Act 23 of 1890 enabled the Harbour Board to finance the lengthening of North Jetty, the widening of the working head, the widening of the viaduct end for a gangway to secure the safety of passengers, and the acquisition and installation of equipment to drive hydraulic cranes and provide electricity to light the Board’s property properly. Work could now be done after dark on fine, still nights. The extensions to the jetty were completed in July 1894. An electric power house was built in 1906.

Aug. 16         The arrival of Cecil Rhodes by train to an enthusiastic reception. He stayed at the Grand hotel and in the evening he addressed a large crowd in the Feather Market Hall in support of two of P.E.’s candi­dates in the coming parliamentary elections, James Wynne and Edgar Walton, who were returned with large majorities.