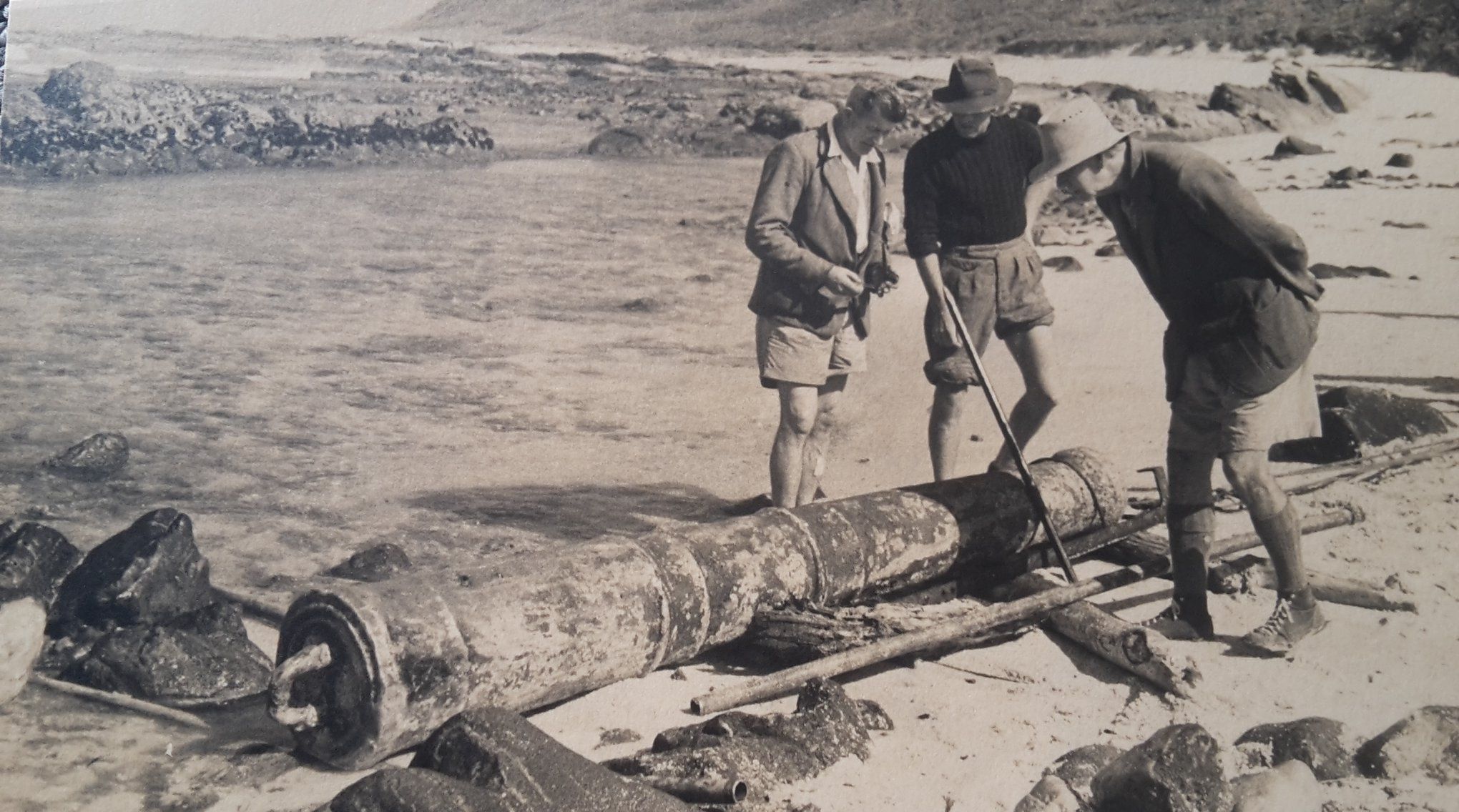 Even though the well-known local diver, David Allen, is touted as the earliest discoverer of the guns of the Portuguese man-o-war, Sacramento, there are in fact several earlier claimants to the prestigious title. The first, from the 1920s has a strong family connection whereas the other claim is undated but probably dates from the 1930s or 1940s.

I will let you be the judge of that.

Main picture: Per Dale Poulter, on the left is Bunny Hodges and on the right, bending over to obtain a closer look, is the elderly Louis John Poulter. Presumably the person in the middle is Harraway

This is definitely a case of might-have-been. My grandmother, Granny Mac, raised her six children at Schoenmakerskop. As such the three young boys spent every free hour exploring the coast. This was their entertainment. Not for them playing computer games or meeting friends at the malls, it was healthy exercise: fishing, swimming and exploring the rocks. According to my cousin, Rosemary MacGeoghegan, now 88 years old, one day while these boys – my father and his elder sibling, were walking along what today is known as the Sacramento trail at low tide, they noticed a cannon half-buried under the sea sand in the water. On their return home that day, my gran notified the authorities at the Museum, then located at Bird Street, of their find. Instead of checking the tide tables for another low tide, the officers performed an in loco inspection on a day convenient to themselves. It happened to be high tide. Naturally they dismissed the objections of these youngsters and proceeded to attempt to find these artefacts in the sea. The inevitable occurred. Nothing was found and nothing further was heard from the museum.

What are the chances that this gun was from the Sacramento? According to the map drawn by Dave Allen, most of the guns were deposited at sea as they were stowed in a hold whereas those positioned in the bow were swept further into shore together with the forepart of the ship. Further credence to the McCleland boys’ claim to have discovered a cannon from the Sacramento, was that the gun was located at Gordon’s Beach which was where the Sacramento was wrecked. It is highly unlikely that these callow youths called this beach by its formal name but in all probability, they referred to it as the sole beach for the prevalence of this fish as they would do for the rest of their lives.

In his book, The South African Beachcomber, Lawrence Green recounts the story of the discovery of cannons near Sardinia Bay. As he does not provide the date, I am unable to substantiate whether Mr H.G Harraway discovered these guns before my father and my uncles but it certainly was long before David Allen made his discovery in the 1970s as Green’s book was published in 1954.

This is what Green has to say about this discovery

A man who deserves to find a chest of gold is Mr. H. G. Harraway of Port Elizabeth, a most determined treasure hunter. He has preserved many records and relics of the 1820 settlers, and this taste for history led him naturally into the field of wrecks and their stories.

First he secured a licence from the Commissioner of Customs to salvage four wrecks along the coast near Port Elizabeth. Then he searched the archives and other sources of information. Among his helpers were “Bunny” Hodges and other ex-soldiers, keen fishermen who knew the coast well; and they reported a strange object in a deep pool at Sardinia Bay near Cape Receife. They were puzzled because, unlike most submerged objects, this one was not encrusted with shellfish.

Harraway formed a theory that it must be of brass or bronze. Divers were sure it was a cannon. It was a most difficult salvage operation, for the sea was rough; but in the end the cannon weighing six thousand pounds was hauled up the beach and hidden in the dunes. Unfortunately the effort had been watched, and rumours of a treasure-chest went round the district. Vandals attempted to cut up the cannon with hack-saws for scrap metal, and the valuable old piece was mutilated.

Mr. Vernon S. Forbes, senior lecturer in geography at Rhodes University, Grahamstown, identified the cannon as one mentioned by Colonel J. R. Gordon, the Dutch explorer, while returning in 1778 from his famous Orange River journey. Gordon drew a panorama of the coast and noted on it that he had found traces of a wreck at the very spot where the cannon was found. The survivors had built huts in the dunes, but had evidently died of hunger and thirst, for Gordon and his Hottentot servant buried a number of skeletons. “Two rusty anchors and a cannon lay in the sea, which I could not identify because of the waves,” Gordon wrote. Not far away Gordon discovered a beautiful carved ivory box which appeared to be a Roman Catholic symbol.

Harraway sent all the available information to the curator of the artillery museum at Woolwich. Experts who examined the photographs described the cannon as a Dutch brass naval gun about three hundred years old. It is a rare specimen, possibly the only existing relic of the work of that fine craftsman, Conraet Wegt Woert. This historic cannon has been presented to the Port Elizabeth municipality. Harraway still hopes to recover further objects from the wreck.

Based upon the information provided by Lawrence Green, what are the chances that this gun was from the Sacramento? Slim to probably none. Counting against it being from a Portuguese ship is the verdict of the curator of the artillery museum at Woolwich who misidentified and mislabelled this gun as being of Dutch origin. If so, to which ship does it belong? The Zeepaard springs to mind. Being mindful of the fact that the Zeepaard was wrecked in 1823, that precludes it as a candidate on the basis of its relative youth.  Contrary to this expert’s opinion, Dave Allen acknowledges that Hal Harraway’s cannon was in fact from the Sacramento. In recognition of this feat, he has graciously labelled this cannon on his map as number 00.

All things considered, and on the balance of probability, it was actually three young beachcombers from the tearoom at Schoenmakerskop in the 1920s who should have been accorded the recognition for discovering the guns of the Sacramento.

According to an email from Mr Peter Rennie, he states that “I will confirm your doubts of Dave Allen discovering the Sacramento. My parents, who trained him and Gerry van Niekerk to dive, showed him the site on condition [that] he never raised the cannon. The site was well known to spear fisherman in PE according to my father. The person who showed my parents the site was a gentleman named Vernon Du Preez, an avid spear fisherman and diving partner/friend of my parents at the time, and they in turn showed him.“

Harraway’s photos of removing the cannon

Reading in the Herald of the raising of the canons from the Sacramento which sank off Sardinia Bay in the year 1647, I would firstly like to congratulate David Allen on his stout effort. It took a lot of hard work and I admire him for all he did.

Mr Lal Harraway was the first to raise a cannon off the Sacramento. He acted on information received from local anglers who told him about something that looked like a cannon in a pool. He investigated and pulled out a cannon. This cannon is now in front of our museum. But he was always under the impression that it was from a Dutch wreck.

In about 1963, two of the founder members of the Dolphin Club, Mr Clive Tutton and Mr. Clive Cocayne, were skin diving in the area of the Sacramento. Clive Tutton was looking for fish over the side of the boat when he saw a flash of gold from below. He shouted to Clive Cocayne to stop the boat as he had seen a red steenbras. When he dived, he landed on top of the cannons. So, Clive Tutton was the discoverer.

I know that Duncan Hennegan and Ken Crellin of the Dolphin Club knew of the wreck. In fact, the first time I saw the wreck was from the deck of Ken Crellin’s boat.

Clive Tutton, in collaboration with Mr. Lal Harraway did a fair amount of research on this wreck. The outcome of their research was that they suspected that it was the Sacramento but were not certain. Now, of course, there is confirmation.

So, the wreck of the Sacramento was not discovered a few months ago. I know that David Allen was told of the wreck a few years ago and this was mentioned in one of your articles. Perhaps the person concerned showed him the exact site.

However, let credit go to David for all his hard work. Many people knew about it and did nothing constructive about it. At least he had the initiative to get moving and raise the cannon.

The Guns of the Sacramento by Geoffrey and David Allen (1978, Robert Garten, London)

Schoenmakerskop: From Mrs. Mac’s Tearoom to the Sacramento

Port Elizabeth of Yore: The Sinking of the Zeepaard