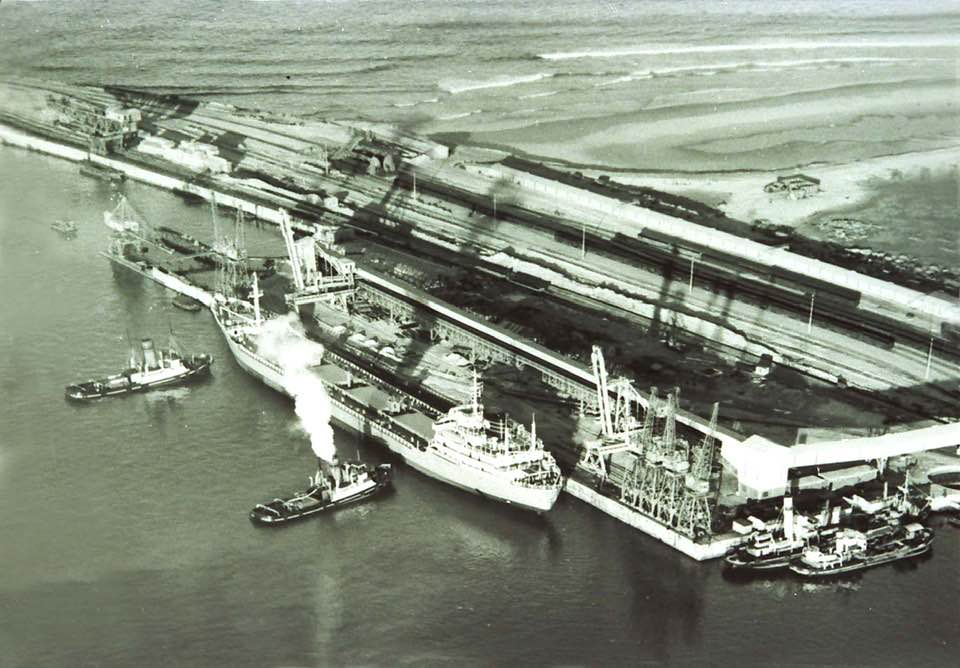 Fifty-seven years ago on the 1st April 1963 the Port Elizabeth ore berth was opened and the first carrier to load was the Swedish bulk carrier ‘Lappland’. The Shigeo Nagano operated by the Norwegian company Berge Sigval of Bergeson called on the 16th August 1965 to load ore, which was the largest single consignment of ore , 64,613 tons to be exported out of a South African port. She loaded the record cargo in 55 hours at the berth for four days. Due to her size , the J.R. Moore was brought from Durban for the berthing of the carrier as the T. Eriksen was under repairs at the time due to her sinking with the loss of three lives. The ‘Shigeo Nagano’ sailed at high tide at 08:50 am on Friday the 20th August 1965. She held the record for being the biggest carrier to call and load in Port Elizabeth only to be broken in November 1981 when the giant carrier ‘Neckar Ore’ arrived and loaded a record cargo of ore which to this day is still standing.

Main picture:  Picture taken on the 1st April 1963 the day of the opening of the ore plant in Port Elizabeth showing the Swedish bulk carrier ‘ Lappland’ the first ship to load ore from the new berth.

This is a verbatim extract from the magazine, The Engineer,  dated 30th August 1963.

A railway wagon unloading system recently placed in service at the new ore terminal at Port Elizabeth, South Africa, is designed to unload various classes of mangenese and iron ore at the rate of 1,500 tons per hour.The equipment handles standard South African double bogie or four-wheeled wagons up to a maximum gross weight of 180,000 lb, or smaller wagons in pairs. It was designed and manufactured by Strachan and Henshaw Ltd, Bristol, for Robins Conveyors (South Africa) Pty Ltd, the main contractor to South African Railways for the complete ore stocking and ship loading plant.

The wagon unloading plant is illustrated above and consists basically of two separate systems. Each system is complete in itself and comprises a heavy-duty “Rotaside” tippler together with a side arm charger which takes full wagons from the approach tracks, delivers them singly to the tippler and finally re-assembles rakes of empty wagons ready for collection.

Full ore wagons are delivery directly by locomotive on the approach track leading to one of the two tipplers and are positioned so that the leading wagon in the rake is approximately one wagon’s length from the tippler. The first eight wagons are then separated from the rest of the rake by one uncoupling and from this stage onwards these wagons are handled by the charger.

The charger runs on tracks beside the main wagon tracks. From its cab on one side,the tippler/charger operator controls the whole unloading sequence by push-buttons.The charger is driven by a 22 b.h.p. Mawdsley electric motor via a pinion and rack on the charger track, and has a coupling arm which can pivot through 90 degrees from the horizontal to the vertical position to clear the raised tippler and, if necessary, shunting locomotives as well. An automatic coupler on the end of the arm registers with the wagon coupler when the arm is in the horizontal position.

The charger has a maximum drawbar effort of ten tons, and its operating speeds are 75ft/min for drawing up rakes of full wagons, 120ft/min for charging the wagon on the tippler table and 180ft/min for return travel

In an unloading sequence the operator engages the lowered charger arm with the front coupling of the leading wagon and draws the whole rake of full wagons forward until it is stopped automatically just short of the tippler. The rear coupling of the leading wagon is then released and the charger moves forward again, marshalling the wagon onto  the tippler platform and, at the same time, pushing out the previously emptied wagon standing on the tippler table. An automatic interlock system ensures that the charger cannot be brought forward onto the table until the tippler is fully down after the unloading cycle.

When the charger has placed the full wagon centrally on the tippler, its coupling is released by control from the cabin and the charger continues forward, compacting previously discharged empty wagons. As soon as the charger is clear of the tippler, an interlock closes, allowing the automatic tip-and-return unloading cycle to be started.

Whilst this unloading cycle is in progress, the charger travels back, with its arm raised to clear the tippler, and engages the front coupling of the next full wagon at the head of the waiting rake. The charger then draws up the rake until the head is once again just short of the tippler and,as soon as the tippler returns to rest, an interlock closes permitting the start of the next cycle.

The number of empty  wagons which can be compacted beyond the tippler is limited by the convergence of the tracks from both tipplers. An interlock prevents these tracks from being over-filled and assembled empties are removed by locomotive.

Each of the two “Rotaside” tipplershas a rated hourly capacity of twenty wagons, with a gross weight of upto 180,000lb. The fully counter-balanced tipplers are mounted on trunnion bearings and are driven by a 200 h.p.motor.On each machine a wagon can be rotated through 150 degrees with a tip-and-return cycle of 120 seconds.

Clamping of wagons is automatic on the tipplers. On commencement of rotation, the rail table is lifted from its supports and, by virtue of its pivot being off-centre from the track, the table and wagons tilt slowly until the side of the wagon comes gently to rest against a longitudinal side fender. Before reaching the 50 degree position the top of the wagon engages self-aligning compensated transverse beams forming the top stop. In this position the top clamping gear is automatically locked and wagon and machine continue rotation as a unit, the wagon being positively held in position on the table in the tipped position.On completion of the tipping cycle, the tippler movement is automatically reversed and it returns the wagon to the upright position. Unclamping of the wagon occurs in the reverse order to the clamping sequence.