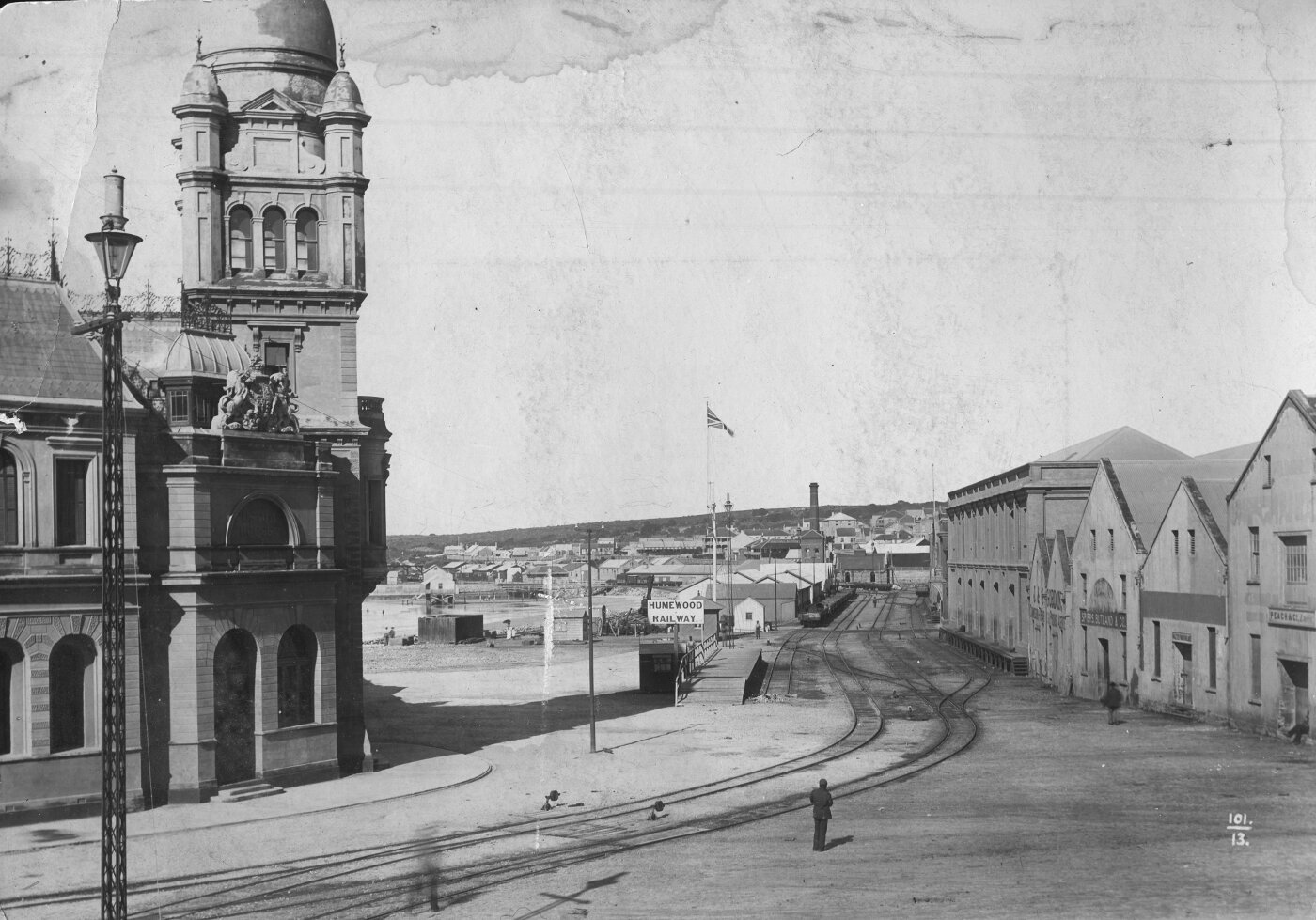 Of all the Branch Lines in Port Elizabeth, this one to be the least known. Initially it was laid as part of the project to tame the supposedly deadly driftsands which would encroach and smother the harbour. To prevent this apocalypse, it was decided to cover this moving sea of sand with the garbage generated by the residents of Port Elizabeth.

Main picture: The platform adjacent to Customs House to embark on the journey to Humewood

The movement of the driftsands in the early 1890s with the buildings at the Fishery [present day Hobie Beach] being covered, gave additional impetus to the Driftsands project. The objective of this project was to stabilise the dunes by planting vegetation on them. This would now be augmented by covering it with the town’s refuse.

Before the era of vehicles, the solution to the logistics problem lay with the railways. In 1890, Humewood and the surrounding area were totally undeveloped.

Developments prior to Humewood being established

One of the earliest developments prior to the establishment of Humewood was undertaken by Piet Retief, the future Voortrekker leader, who, during the 1820s, built a house on the Strandfontein property. It encompassed the whole of current day Summerstrand, and the house stood on the site of the present Beach Hotel.

In 1864, Frames’ Reservoir on the Little Shark River was opened. It would provide water to the parched town. As the water was gravity-fed, the pipes ran along Main Street to North End, leaving the higher sections of the town without water.

In view of the fact that this area was so isolated from Port Elizabeth, when the town experienced an outbreak of small-pox in 1882, it led the Council to construct two wood-and-iron buildings – the Lazaretto – on the south side of the Little Shark River as an isolation hospital.

The action which provided the impetus to lay a railway line southwards was the sale of 20 marine villa sites on the 30th May 1893 on the south beach between the original Happy Valley  [next to Hume Park] and the Klein Shark River. This act marks  the beginning of Humewood which was named after William Hume, the Chairman of the Harbour Board at the time. As there was no direct connection between South End and the newly proclaimed suburb, a direct road to the property following the coastline had to be  constructed.

The Government had recently laid a railway line from outside Customs House in Jetty Street parallel to the Humewood road past the 20 stands,  which had recently been sold, all the way to Shark River. In those days the Shark River had a bifurcated mouth, requiring the building of two bridges over the Shark River. The one branch of Shark River, now filled in, is no longer visible and the second over the Little Shark River was to become known as Happy Valley. After crossing this stream the railway line veering right into the sand dunes. The gauge of this railway line was the Cape Colony’s standard gauge of 3 foot and 6 inches.

This railway line would only operate for 10 years. On the 23rd October 1903, the Harbour Board’s passenger train service to Humewood was  terminated. As the Driftsands project was drawing to a close, it was probably apparent to the Harbour Board that the passenger service which only ran once per week on a Sunday, could not cover the costs of the service. In the wake of the extension of the tram route to include Humewood in October 1902, it made little sense for the Harbour Board to offer a competing service. On 21st January 1903, the tram service to Humewood, operating at half hourly intervals and a trip cost 3 pence, commenced.