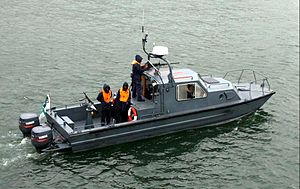 In the age of radio, it is highly unusual for a vessel to just disappear at sea without a trace. But that is precisely what happened to a Harbour Patrol Vessel, a Namacurra pennant number Y1506, based at SAS Donkin, in Port Elizabeth.

What role did these Namacurra class patrol vessels play in the defence of the harbours but more pertinently how and why did this vessel just disappear into thin air? Was its disappearance similar to the modus operandi of flight MH370, the Malaysian Airlines Boeing 777 which simply vanished? On purpose.

The Namacurra vessels are a class of inshore patrol boat currently in service with South Africa, Namibia, Malawi and Mozambique. Built in South Africa between 1980-81 these boats can also be transported by road. One was transferred to Malawi in October 1988, two to Namibia in 2002, two to Mozambique in September 2004 and one was lost off the coast of Port Elizabeth in February 1986. These boats are in use with the harbour patrol forces in Cape Town, Port Elizabeth and Durban. They are also used by the Operational Boat Squadron, until more suitable boats can be procured.

These vessels were designed by Tornado Products of Stellenbosch and built in South Africa to fulfil the role as Inshore Patrol Vessel. With a maximum displacement of 5.2 tonnes and a length of 9.5m, their two 140kW BMW marine petrol engines enabled them to maintain a speed of 32 knots [55 km/h]. Each boat is manned by a crew of four or more. The Namacurra is equipped with snag lines and scare charges and is used mainly for anti-personnel work and harbour defence. During the initial trials, Volvo engines were used. These are substituted for inboard BMW motors at the tender stage. However in service these proved to be unreliable and have subsequently been replaced with two outboard motors.

For its size, the aluminium hulled vessel Namacurra is heavily armed being equipped with 1 x 12.7  Browning machinegun and 2 x 7.62 LMGs, a 12gg shotgun, R4 assault rifles and depth charges.

During August 1979 , two of these sophisticated harbour protection vessels were delivered to SAS Donkin in Port Elizabeth. The boats are in keeping with the Navy’s role of port protection in addition to the protection of the Cape sea  route. The crew of these two vessels were mostly Citizen Force members from SAS Donkin, while a Permanent Force technician was responsible for the maintenance of the vessel and its engines.

The local press reported on the Namacurras as follows: “Sleek and grey, the boat looked deceptively innocent as she lay alongside the quay in the harbour before being taken out in the Bay for a test run. In spite of the mounted machine-gun, the vessel looks much like a super deep-sea fishing launch, but the tremor of the  powerful  twin engines soon dispelled this illusion. The thrust of the engines in the open sea had the boat cruising at around 30 knots which was followed by an incredible turn. With the twin hull and twin engines when she turns at speed, one side almost lifts out of the water while the other digs in, so that she almost turns around in her own length like a motor-car making a sharp U-turn.”

At that time the boats fell under the Marines who are especially trained for defence of the harbour. They backed up the existing security systems in the harbour and performed patrol duties, explosives disposal, dog handling and other security matters. Overnight protection exercises were carried out regularly in the harbour area setting up roadblocks and patrolling the harbour in dinghies with Namacurras in a back-up position on standby.

This [event] occurred in February 1986 and an air and sea search was immediately put in hand and continued for several days without any success.

The seaman, Leading Seaman Verster, was seen leaving the harbour [alone] in the boat. He was normally in charge of the boat and was consequently experienced in the handling of it. The boat left the harbour at about 5.20 p.m. and was one of the two Namacurras stationed at SAS Donkin. The Namacurra class patrol boat is a powerful nine-metre vessel and usually carried two machine guns, but at the time of leaving the harbour it was unarmed. Because of the camouflage painting of the boat it became exceedingly difficult to spot it at sea, especially in fog.

The search area was extended and a vessel from Durban was called in to help in the search, and a senior naval officer from Cape Town was sent to Port Elizabeth where an inquiry was immediately started.

A description of Leading Seaman J P D Verster, of Kuil’s River, Cape Town, stated that he was wearing a yellow shirt and black pants and shoes at the time of his disappearance. It was learned that he had armed himself with a shotgun before he hijacked the vessel. It was believed that he carried a number of scare-charges (explosive devices).

The search area was eventually extended and was conducted by sea, land and from the air but there was no sign of the boat or the seaman. There was speculation that he may have landed on the coast and residents for several hundred miles along the coast were asked to keep a look-out for debris or the wreck, or possibly the body of the missing man.

The patrol boat was capable of covering 100 nautical miles (more than 180 kilometres) without refuelling so that left an exceptionally large area to be searched. The National Sea Rescue Institute, S A Railway Police, the Navy, and the Air Force continued the search without any sign of the missing boat. All ships in the area were alerted and asked to keep a look-out for the boat.

At the time, a Naval spokesman said that the young man’s actions were difficult to understand as he was a reliable, able, and well-disciplined seaman during his national service. In the meantime, a replacement boat was sent to SAS Donkin and the search continued. The inquiry into the matter was provisionally completed towards the end of April 1986. However, the Navy still followed up each and every report received in the hope of solving the mystery. Reports had been received from all over the country, but all proved to be of no avail. No sign was found of either the nine-metre boat or Leading Seaman Verster although the search area had repeatedly been extended to the limits of where the boat was able to reach with the fuel it carried.

Almost a year later the mystery had not been solved and presumably never would be. During January 1987, Naval Headquarters in Pretoria issued a statement that although several reports had been received after Verster’s photograph was published in the newspaper, all had proved on investigation to lead nowhere. Although the search had been called off, the navy still hoped to solve the mystery and investigated every report received. And there the matter rests and probably will remain an unsolved mystery.

Immediately on the announcement of the vessel’s disappearance, speculation mounted as to its fate and of more importance, the fate of the seaman, Verster. Crucially why would Verster take the boat singlehandedly when the SOP [Standard Operating Procedure] clearly stated that three personnel had to be on board when sailing into the open sea?  Secondly, why leave at dusk? This suggested some nefarious motive.

On the Facebook Page, Shipping Memories, various theories and thoughts are advanced. The most pertinent, being from colleagues, have been used.

On the Saturday following Verster’s disappearance I was in town, having visited the main Post Office to send off some correspondence and to pay some accounts for my mom. As was my habit, I bought some fish and chips in Jetty Street before heading to the bus terminus. Whilst waiting there was a commotion at the harbour entrance, and eventually the story spread that a patrol boat had disappeared. I followed the story, and tracked down this info:

Excerpt taken from Die Burger (circa ’87).

THE disappearance of Leading Seaman Johan Verster (19) of Kuil’s River almost a year ago from his naval base in Port Elizabeth is still a mystery, says Cdr. Dirk Visser, liaison officer of the Navy. Leading Seaman Verster was a mariner. On the same day that he disappeared, a Namacurra harbour patrol boat from the Navy was seen at 5.20pm. leaving the harbour and entering the open sea. Presumably Verster was the helmsman. Since his disappearance on 31st January, no sign of him or the boat has been seen. An intensive air and sea search was called off after five days. A search along the coast, which lasted weeks, also yielded nothing. Each inlet on the coast was combed by light vessels of the National Sea Rescue Institute. Ships were asked to be on the lookout for the vessel.

“We have now shown people along the coast what a Namacurra looks like and asked them to be on the lookout for wreckage,” said Cdr. Fisher said. “We pay special attention to places where wreckage washes out regularly. The Marines also conduct regular foot patrols along the coast. They are on the lookout for wreckage and visit inaccessible places where a boat could possibly be hidden under trees. Some time ago, human bones were washed up on the island of St. Croix out near Port Elizabeth. However, it was determined that it was a fisherman’s drowning. We do not know what happened to Seaman Verster and what has become of the boat. His parents retired in the vicinity of Klein-Brak River. They accept that Johan is no longer alive.

His parents supplied a colour photo to the Navy which will soon be made available to the press and Police File. “We are doing this so that it can be determined whether he is not still alive and is somewhere,” Cdr. Fisher said. “He had a savings book. Since his disappearance, nothing has been drawn from this. Cdr. Visser has after Verster’s disappearance said it was incomprehensible because he had proved in his period of service that he was a reliable, capable and disciplined sailor. The Navy has meanwhile replaced the missing Namacurra boat.

“Was on duty that day at S.A.S Donkin, [during] National Service. Those 3.2 Litre B.M.W. engines [would have] emptied the 2 100L [fuel] tanks [sailing] to and from Bird Island so he could not get very far. It had to be blown up to sink it, but then at least one of several thousand plastic bottles would have flushed out. The only explanation that makes sense is that he was loaded onto a larger ship.

I read that the Namacurra can only cover a maximum of 180 nautical miles at a relatively low speed. It makes sense, then, that he could not have gone very far. I also do not believe there was an explosion. Yes, he had a shotgun and a few M9 grenades, but as you rightly say, there would have been thousands of pieces floating around.

There was a lot of speculation. Went out to sea with Verster on patrol a few times, very withdrawn and quiet, and never talked to us. After that time, thought he was busy with plans. Again just speculation.

What can one make of this incident? Why would a solitary seaman take this vessel into the open sea at dusk contrary to protocol? Clearly there must have been a plan in mind. The least serious was to pick up some friends for a joy ride but surely after more than 30 years somebody would have confessed to this prank. Perhaps en route the boat capsized and hence no distress flare or radio call was made.

Perhaps more distressing is the possibility of a young man in deep depression who had conjured up an elaborate suicide plot.

If it is the latter option, we can be thankful that fellow sailors were not trapped in his intricate web of death.