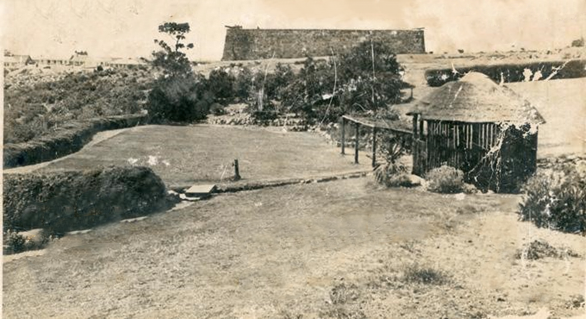 In this context utility refers to the state of being useful and beneficial and has nothing to do with being profitable. In attempting to address this issue, it raises the question of what the purpose of the fortification was and furthermore did it fulfil its objective.

Main picture: Fort Frederick with entertainment areas in the foreground

Unlike the western portion of the Cape Colony, the military threat on the eastern frontier was threefold:

Of the three military threats, one was insoluble: the French intervention in Afrikaner grievances as it was practically impossible to guard a 1000-mile coastline. The other two menaces would require troops patrolling on the volatile border as well as a logistics base in the rear. As the only location on the eastern littoral which was suitable to act as a “harbour”, except for when the south-easter blew, was Port Elizabeth. Hence the logistics base would logically have to be situated there.

The ultimate decision by the military would have profound implications. By constructing Fort Frederick overlooking the Baakens River, the unintended consequence was to channel the development of the town to the foot of the hill. This effect can be discounted from a military perspective as it was unintended. From a town development perspective, it would have been preferable to use North End beach as a harbour. That said, North End was totally unsuitable from a military perspective. However, the positives militarily for the fortification being constructed on the Hill overlooking the Baakens River meant that at least one side was protected by a precipitous hill, water was abundant and that the canons’ arcs of fire would include the landing beaches. The most telling criticism of the latter point is the ease of which North End could be used as the substitute landing beach by a foreign invading power, making the decision as to the Fort’s location moot.

At best, the current location of the Fort would only be able to meet two of the three strategic needs and then only as a rear logistics base.

The defence possibilities of this site were communicated by General Dundas to the Governor of the Cape. Amongst them he noted that the choice of the site was predicated upon the fact that location was “on the right bank of the Baakens River at an elevation of about 230 feet above the level of the sea and immediately contiguous to the scarped side of the hill which presents nearly a perpendicular section to the shore of the river”. Furthermore Dundas stressed that the site was “nearest to the usual landing place and the most sheltered against the prevailing winds, especially the westerlies.” To further justify this site, Dundas claimed that if a foreign power [probably referring to the French] were “invited by local ‘disaffected’ an invading enemy would wish to get possession of the settlement and a fortified structure could act as a deterrent.” As if justifying post hoc the erection of the fort he inserted some tenuous reasons for its construction. Per Coetzee, these were as follows: “Dundas also expressed his belief that a fortification would contribute to the preservation of public tranquillity, a check on the “turbulent disposition of the Boers”, the prompt payment of rent by the farmers, the better treatment of the brown people and a more punctual attendance to government orders and regulations. The commander of the post had strict orders to act on the defensive only”.

Lieutenant Stocker was neither sanguine nor as confident as his commanding general in this regard speculating that “if this is the main object it is to be apprehended the means provided would prove inadequate”.

In his book Forts of the Eastern Cape, Coetzee confirms Stocker’s speculation as Dundas echoes what Stocker privately felt:

Dundas assured [Governor] Yonge that Fort Frederick “has no connection whatsoever with the Caffres” and has never been considered as a post liable to be attacked by the Xhosa. If such an attack or invasion should occur the Fort could afford little or no protection to the country in general. Neither Fort Frederick nor any given number of similar works or military positions could possibly guard such an extensive frontier line from the possibility of an invasion. The only indirect or speculative relation which the fort could have with the indigenous population was that it would serve as a depot where supplies could be received for any future military operations. While it stays in British hands the garrison of the station could either be relieved or reinforced at pleasure. If it should become necessary to march against an internal enemy, it would be important to possess a strong base point from whence operations could be directed. In the unfortunate event of a possible reverse and military setback, Algoa Bay with its strongholds and abundant and excellent fresh water supply, would provide a safe retreat where hostile forces would find it extremely difficult “to cut off your communication with your shipping”.

From this correspondence it is very apparent ab initio that the Fort would never meet the primary strategic need. If not, what need would it meet that would justify the continued usage of this facility for about 60 years.

Were the Strategic Needs Met?

Foremost amongst the needs met was as a storeroom for gunpowder. Inside the redoubt, to the right of double entrance gates, was a powder magazine, a small, dry, strong, but low building of masonry with boarded floor measuring 4.9m x 3.9m x 3.0m. in good condition, capable of containing fifty barrels (about 2,000 lbs.) of gunpowder.  During one of their periodic reviews, the Royal Engineers recommendation was that it be retained since it served a useful purpose for the reception of gunpowder landed from Cape Town bound for the frontier until a means of transport to Grahamstown, the headquarters, became available.

In his report of 1827, Holloway was very dismissive of the usefulness of the Fort. Coetzee claims that Holloway “could not find any references in the Engineer Department as to the purpose for which the redoubt was originally intended and judged that as a work of defence ‘it was devoid of any apparent utility’. It was too far from the anchorage or approach to the shore to be of use as a sea battery especially because between it and the sea the town of Port Elizabeth was emerging, and in that way intercepting its fire. As a stronghold to withstand a foreign invading army it was of no military importance and he also pronounced it of no use as a place of security against the Xhosa “whose territory is now retired nearly two hundred miles (300 km) from Algoa Bay.”

As far as Holloway could make out, the only purpose which the redoubt served at that time was the securing in the magazine of the gunpowder intended for the Frontier and the use the civil authorities made of it for confining prisoners in the blockhouse or ‘keep’ and the placing of constables in the guardhouse.  In his opinion these buildings could be much better appropriated as storehouses which the military urgently needed.

In conclusion, even the military authorities concede that Fort Frederick served little useful military purpose apart from the storage of gunpowder and the blockhouse being used as a civilian jail. Notwithstanding this, the town of Port Elizabeth should rejoice as it was the establishment of the Fort which unwittingly set the town on a path of growth. That singular benefit was ultimately a poisoned chalice as its location trapped between the hill and the sea would throttle the development of the town. But in and of itself, military fortifications are justified on military grounds disregarding unintended consequences.

Forts of the Eastern Cape – Securing the Frontier by Colin G. Coetzee