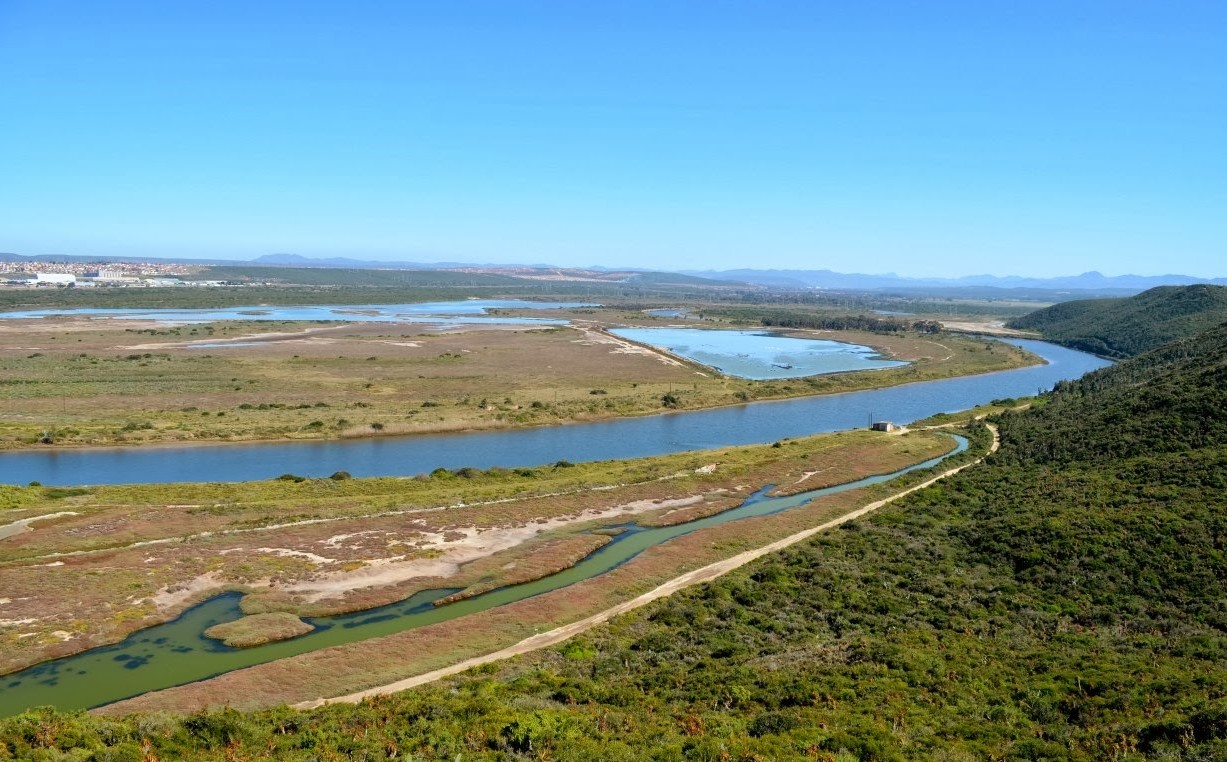 In a manner of speaking, the salt pans which span over the northern areas of Port Elizabeth, are its mineral wealth. Unlike the mines in the north, their minerals are easy to extract without expensive machinery or underground excavations. Furthermore their lifespan is measured in millennia and not decades.

It is thought that in all likelihood, these salt pans have been used for millennia but not on an organised basis by the local Khoikhoi. The saline deposits of this district have long been famous, but until the arrival of the settlers, there had been no attempt at systematic development. It was the entrepreneurial spirits of the settlers that turned this untapped resource into an asset for the area.

Amongst the pre-1820 visitors to this salt pans were a Scottish plant collector, Francis Masson who visited Algoa Bay accompanied by Carl Pehr Thunberg, a Swedish botanist and physician. They visited the Zwartkops salt pan in 1774 and Thunberg recorded seeing hyenas, buffalo (a herd of 500 – 600), zebra, quagga, hartebeest, kudu, elephants and rhinoceros.

In the neighbourhood of Port Elizabeth there are several saltpans, the closest of which was the Zwartkops Saltpan. It is situated about three kilometres to the east of Zwartkops River and is known as the Grootpan. Today this area is surrounded by working class housing and the thick bush which once covered this area has long been consumed by the fireplaces of these simple homes.  In the 1900s, it was magical. At the centre of this dense bush, stretched a dazzling flooring of snow-white salt, its crystals glancing in the sunlight as if some generous fairy had scattered diamonds in wild profusion to add to the glory of a snowfield. For a couple of hundred yards or so all round, this bed of salt extended, encircling the pan, and in the centre was the wide, shallow, deep blue water of the pan itself. It is indeed a wonderful sight.

The pan had been worked more or less systematically by the recent owner, Mr. Hitzeroth, but its capabilities were never fully realised until it passed into the hands of its present owners, ‘The Zwartkops Saltpan Company’. Upon acquiring possession, the company obtained the best advice available for the working of the deposit, and the result was the present production system.

The shape of the pan is an almost perfect oval, about 1,600 yards long and 1,000 yards wide. At its deepest it is about two feet when full, and after heavy rains. The sources of supply are saline springs, and these by their continued inflow have covered the whole bed of the pan with a thick crustation of salt some two inches thick, firm enough to bear the weight of the workmen and the carts used for transporting the salt. The system of working is extremely simple. When full of water to its utmost edge, the pan is, of course, unworkable, but immediately evaporation commences, and as the water recedes, working can commence. As the water evaporates, the salt is deposited upon the permanent salt floor of the pan. The extent of this deposit may be estimated by using the density of the brine at 23 lbs of salt to the cubic foot, taking the average depth of brine over the surface of the pan at six inches. Based upon this calculation, the pan would yield 600,000 bags, or 60,000 tons of pure salt.

As the water evaporates, the salt deposited on the floor is scraped off with iron straight handled spades. It is then washed by being worked backwards and forwards in the shallow brine with solid wooden rakes. It is then raked beyond the edge of the brine and piled into mounds some four to five feet high. In this position the salt rapidly dries, and in the course of a few hours it is loaded on to wooden handcarts and wheeled into the drying sheds on the margin of the pan. On entering the shed the foreman samples the load and grades it as first, second, or third grade quality. The load is then stored according to its quality. In the sheds the salt rapidly loses all its moisture being ready for bagging in the course of three to thirty days. The grain of salt varying from coarse to extra fine, undergoes no crushing, but is simply sifted if required for table use or salting of butter, and thus the original crystal is retained. The chief grades for the market are coarse, medium, and fine, which are distinguishable by the letters C.B.A. extra coarse (for cattle-feeding), C.C. or extra fine A.A. Ultimately the salt is sold to the wholesalers in bags containing 200 lbs. net weight of salt.

Compare the work performed here with that carried out in the salt mines of other countries at enormous expense, whereas at Grootpan it is processed using entirely natural processes. No artificial evaporation or no expensive machinery is required for the purpose of refining. The whole work is done by nature. The supply is practically inexhaustible, and when in full working order the pan can produce about 300 tons of salt a day. The ease of collection is such that one gang of workmen, generally consisting of four, can in one hour collect as much salt as they can process during the remainder of the day.

Quality of the salt

If the work is not interrupted by inclement weather, the sheds are heaped up to the roof. Of these there are five large sheds capable of storing about 8,600 tons, and six small sheds capable of containing 3,600 tons so that all in all, the Company has sufficient storeroom for 120,000 to 150,000 bags or to 15,000 tons of salt. It is not only apparently inexhaustible, but it produces salt of the utmost purity, equal, in fact, to that of the Stoke Prior Works in Worcestershire, which has the reputation in those days of producing the finest salt in the world.

Even though the saltpan estate is bounded by the railway on three sides, the company was compelled to transport the salt to the railway siding by ox-wagon. Ultimately the company at their own cost built a branch line connecting the salt pan with the Midland Main Line at the Aloes siding, which is operated by the Government. This then allowed supplies of salt to be loaded onto the railway trucks in the sheds at Grootpan and delivered from there to any railway station on the Cape system. The company incurred a considerable expense to create these facilities, but the advantages thereby gained were enormous. The shipping was greatly expedited and increased, since the salt could then railed in the trucks directly from the salt sheds at the salt pan to the jetties in the harbour, and thence discharged into the holds of ships lying alongside.

In 1894, the directors of the company were Messrs. E. Stephani (Mosenthal & Co.), A. Hirsch (Hirsch Loubser & Co.), T. W. Gubb and H. W. Dalldorf (Dalldorf, Schabbel & Co.), the last-named firm acting as selling agents and secretaries to the Company.

By 1894, the company had obtained three silver first prize medals at various Colonial Exhibitions and a gold medal at Kimberley in 1892, in fact wherever it exhibited its products, the Grootpan Salt received the highest awards and commendation.