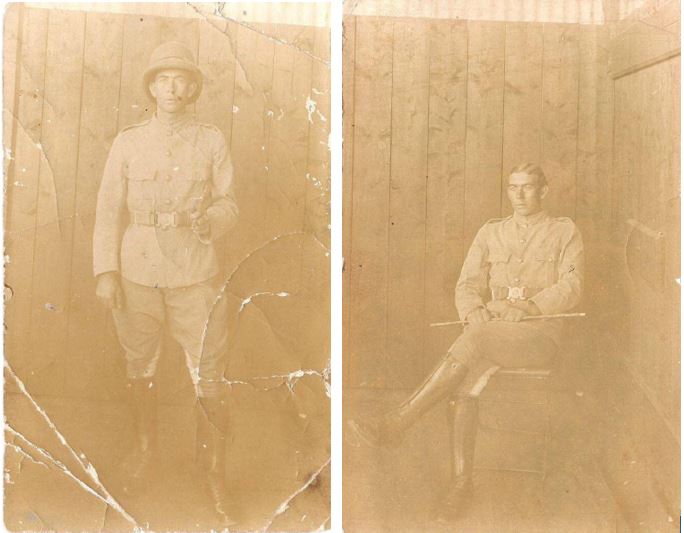 The Poulter Family of Port Elizabeth might not have been prominent socially or in municipal affairs yet through the prism of this family, one is able to view life of the Port Elizabeth of Yore. All of this information has been kindly supplied by Dale Poulter of the current generation of Poulters.

Main pictures: Louis John Poulter as a member of the Southern Rifles

Henry moved to Port Elizabeth from George around 1893-1895. He had a sister, Anne Stevens (nee Poulter) who had emigrated to George in 1849.

Henry died in 26 July 1912 at Walmer, Eastern Cape, South Africa at the age of 80 years.  He was buried at St John the Baptist Church in Walmer on 27 July 1912.  His cause of death was senile decay and at the time he lived in Prospect Road in Walmer and his occupation was Gardener.

During early November 1908, a fire destroyed the home of Henry Poulter. Below is the report in the Eastern Province Herald of the 7th November 2008 written by Ivor Markman.

SHORTLY after 7 o’clock last evening the inhabitants of the south side of Park Drive, Cape Road Extension, and other places commanding a view of Walmer were startled by the sight of a conflagration, seemingly of considerable magnitude, which was raging in the heart of the “pushful suburb.” At the corner of Prospect Road and 11th Ave, within the grounds of the Walmer Gardens Hotel, stood a wood and iron house of six rooms and a kitchen.

This house was rented by one Richard Samuel CRAMER, a man of the working class not too well endowed with the wealth of this world, who lived there with his wife, his son-in-law, Henry POULTER, his daughter Mrs. POULTER, and the POULTER’s five children, Daniel aged 10, Ernest aged 7, Frank aged 4,Percy aged 2 and a girl aged one month. At 7 o’clock last evening the entire family, with the exception of three, were at tea in the dining room.

The youngest boys, Frank and Percy, were asleep, while Ernest was undressing to go to bed in the same room as them. Suddenly a crackling noise was heard in the direction of the CRAMER’s bedroom, which is situated on the other side of the house to that in which the three children were lodged.

On investigating and opening the door they were faced with a solid sheet of flame. The room inside was a positive furnace.

Some attempts were made to drown the blaze by throwing buckets of water on it, but the occupants were forced instead to make their escape from the building. Outside it was found all were safe except Frank and Percy.

With great pluck and presence of mind, POULTER, the father of the children, dashed back into the building and succeeded in bringing them out safe and sound. The house was consumed like matchwood and within a few minutes was burnt to the ground.

Dale Poulter’s great-grandfather, Louis John Poulter, was born in Cradock unlike all his brothers and sisters who were born in George. In a newspaper article , Couple had Diary Farm in Walmer, written in 1977, it mentions that he had been in Port Elizabeth for 82 years which means that he had been there since he was 2 as he was born on 3rd Jan 1893.

On the 4th of August 1914 the world was at war – The Allied powers which included Great Britain were ranged against the Central powers and South Africa was called upon to assist in the effort by invading the territory adjacent to her borders, German South West Africa.

The 7th Dismounted Rifles (Southern Rifles) first order of business was to assist in the quelling of an internal rebellion playing out within South Africa between the Union Defence Forces under the command of the prime minister, General Louis Botha, and a force of rebels comprising burghers from the old Transvaal and Orange Free State who were unhappy with the decision to assist Great Britain in a war with Germany.

For this purpose the 1st Southern Rifles (as they were known) were placed under Military District No.3 until 13 December 1914 by which time the rebellion was, to all intents and purposes, a thing of the past. Louis John Poulter at the age of 21 joined the Southern Rifles during this time on the 19th October 1914 with the rank of Trooper and was placed in C Squadron First Troop.

On 16 March 1915 the 1st Southern Rifles entered the German South West African theatre as part of the Northern Force operating out of Walvis Bay from 23 March 1915. The Northern Force were probably the most active of the various forces, taking the fight to the Germans and forcing them up northwards in the territory until, on 9 July 1915, they surrendered at Otavi signalling the end of the campaign. The Southern Rifles were used to protect the vital lines of communication on the march to capture Windhuk along the line from Walvis Bay to kilometre 13 beyond Swakopmund thus playing an invaluable role in the campaign.


Second period of service in the 1st Mounted Brigade

Louis Poulter joined the 9th SA Horse of the 1st Mounted Brigade at the age of 23 on the 4th April 1916. On the 1st of May that year they departed from Durban aboard the HMS Armadale Castle and arrived at Kilindini Harbour in Mombassa, Kenya on the 8th May where they disembarked to take part in the East Africa campaign of WW1.

The 9th South Africa Horse joined the 2nd Division in Tanzania on the 7th July where General van Deventer was waiting for the accumulation of suppliers before he could advance on the enemy where the rearguard had retired to Chambala and the main body at Dodoma. The 2nd Division then engaged the German forces over the coming months.

Louis returned to South Africa aboard the SS Ingoma on the 19th December 1916 before the campaign was over possibly due to ill health as the 9th South African Horse was still involved in engaging the enemy on the 25th December where they had dismounted because all the horses had succumbed.

He was discharged on the 28 February 1917 at Wynberg to return to Port Elizabeth. He was awarded the British War Medal and Victory Medal for his service in WW1.

He was married  to Elizabeth Honigold on the 6 October 1917 at St John the Baptist church in Port Elizabeth by the Rev Hubert Mosel where Mr Poulter was bell ringer for 12 years. They had 6 children: Neville Geoffrey Poulter, Leonard Elwyn Poulter, Daphne Margerie Poulter, Erica May Poulter, Trevor Ivan Poulter and Vernon Godfrey Poulter.

In 1918 when the Spanish flu spread around the world, Elizabeth contracted the flu but survived.  A book on the Spanish Flu in South Africa lists her amongst the survivors. Louis joined the Southern Rifles when he was probably about 18 years and he may have served in the campaign in South West Africa.

Louis’ older brother, Frederick Alfred Poulter (b 1883), served in Boer War and was in the Port Elizabeth District Mounted Troops for which he received the Queen’s South Africa medal with Van Staadens Clasp.

Poulter started Golf Villa Dairy in Walmer. It was situated on land bordered by Church and Short roads between 13th Avenue and 14th Avenue. In those days instead of the tarred roads of today, there were only narrow tracks then. Poulter built up his dairy herd to 72 and with the aid of eight labourers, he did his own deliveries while his wife, Elizabeth Poulter was the book-keeper.

He purchased his first few Frieslands from Jack Harvey at Barkly Bridge and later decided to cross-breed with a Jersey bull that was purchased from the Rev Hutton of Addo. This was an ideal combination as the Frieslands supplied the milk quantity and the Jersey the milk quality.  The cows were stable fed three times a day. He would just ring a bell and the herd would saunter walking back from across the valley.

A cousin of mine, Greville Wood, who used to live in Walmer as a child, recalls that the dairy used to deliver milk about 4 am in the morning in a rattle trap bakkie. His mother used to put out a steel milk can on the stoep and a delivery man would run in and grab the can, exchanging it for a full one, run back to the bakkie with the chain holding the lid to the can rattling.

One of the Poulter family recalls his holidays spent at the Willows. As the McCleland family would also spend their Easter Holidays at Willows during the 1960s, I can relate to the experiences recorded in this article from the brack spring to fishing in the various pools.

“From the time [that] I was 11 months old, my family camped at the Willows for a few weeks every summer. Occasionally the wind blew us home with torn tents. We also went home periodically to wash our hair and clothes, collect post and water the garden. Dad fished from the rocks or went to the office to work. He dug trenches around the bottom of the tents when it rained to divert the water. Mom cooked or entertained friends who visited us or who were camping there too. She taught us all to swim by hanging onto her shoulders and kicking behind until we were brave enough to let go. Then she taught us to  dive off the wall which was built across a natural gap in the rocks to form a sheltered pool. A 44-gallon drum raft was anchored in the middle and grandpa pumped up inner tubes for us to play on. A natural brack water soring constantly  gushed from a pipe near the showers, before being channelled down to the beach. Hundreds of children learnt basic dam building skills at this green lined gutter. We explored the rock pools, caught ‘bollies’ on bent pins baited with crushed periwinkles, allowed shrimps to nibble our toes and make starfish zoos. We collected empty bottles, which we traded in at the café to buy nigger balls or Chappies bubble gum. As we grew older, we ‘checked out the talent’.

Our bedroom cottage tent was furnished with an old carpet, a chest of drawers and metal divans. The kitchen bell-tent had a wooden table, folding chairs, a Primus stove and Paraffin cooker with a blue flame, on a smaller table. Our water was stored in brown eathen-ware demijohns. Hurricane lanteens hung on nails on the tent poles. All this was carted down on the back of the RSCo truck. Once a mattress blew off. I remember thinking [that] it was a piece of paper blowing down the road. The dod, cats and budgie travelled in the car. Our site was in front of Tecoma at the south end of the Willows. All the thatched rondawels had indigenous flower names. Inside the thatch and support beams looked like spiders reflected in pur porridge spoons. Later we camped around the corner where garndpa dug a long-drop loo in the bush. There we saw real spiders. One night a wild car attacked Tinker who was sleeping on my legs. I still have the scars. Christmas beetles, plums and watermelon remind me of our happy times there. A tortoise visited us daily to gorge on plums.

Devastating fires occasionally ripped through the site which was surrouned by thick Port Jackson willow. The winds of change have blown, but we still have memories of fun in the sun at the Willows.

Mr Poulter, who had lived in Walmer for 82 years, could recall how initially there were a few little wood and iron houses around this part of Walmer at that time of which none still exist. They had watched the area change from a farming area into a residential area. Ultimately, their property shrunk to the house and garden they shared with one of their sons at 193 Church Road.

Port Elizabeth of Yore: Recollections of the Walmer Train

Port Elizabeth of Yore: My Second Great Uncle’s Reminiscences of the 1870s