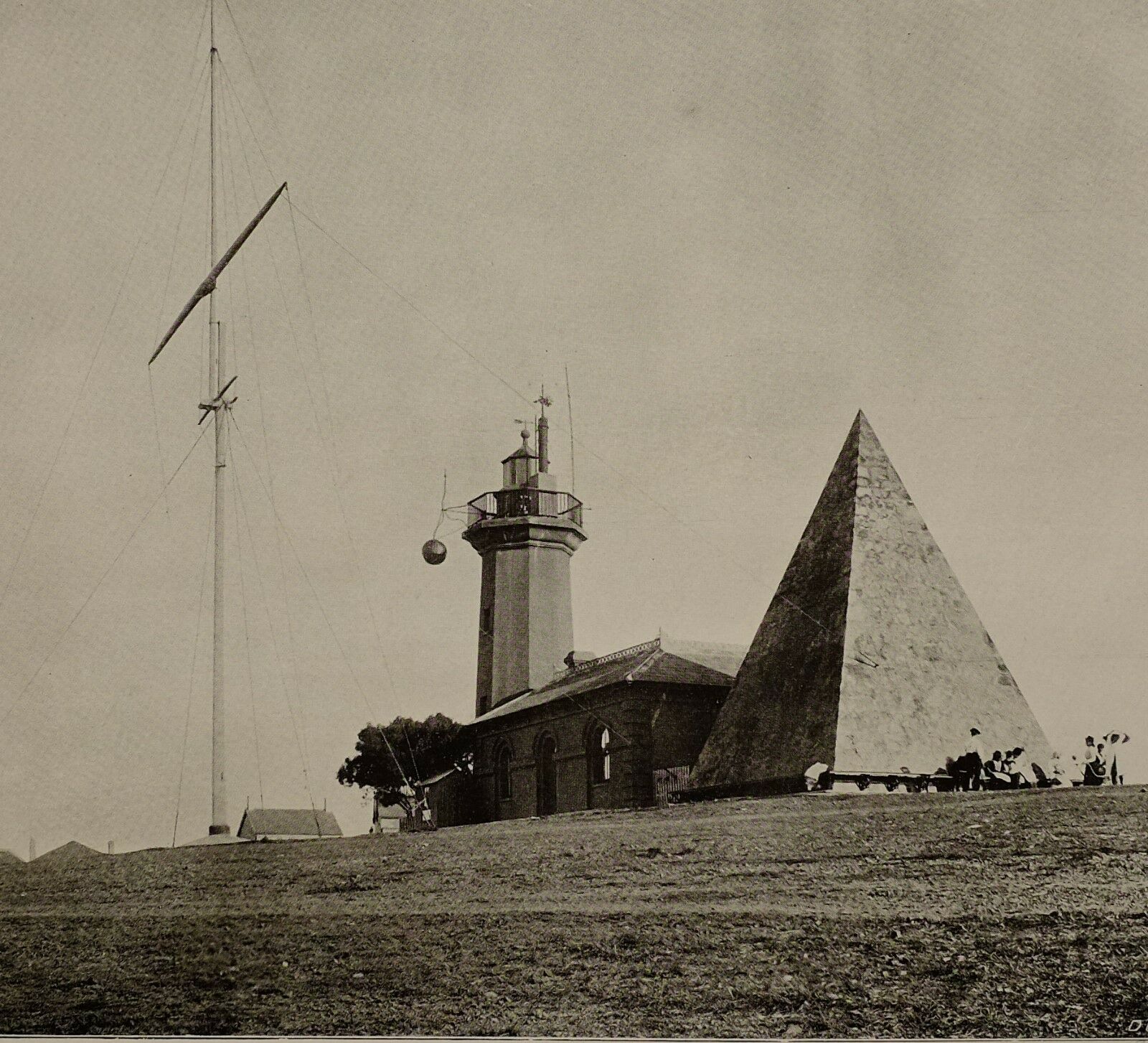 Because they are in such close proximity to one another, I have often considered this lighthouse and the adjacent pyramid as being contemporary structures. Nothing could be further from the truth. This blog, largely based on the 1986 thesis by Jon Inggs, provides the historical detail from the conceptualisation to the erection of the Donkin Lighthouse.

Prohibition on use of Donkin Reserve

According to the Certificate of Registration dated 25th July 1821, building upon the Donkin Reserve was prohibited in perpetuity. This meant that, apart from the 1820 pyramid, it could have no other structures built on it. A copy of the Certificate and the diagram signed by the Land Surveyor, J. Knobel, dated June 1821 is kept in the System Manager’s Office in Port Elizabeth.

The instruction contained in the Colonial Secretary’s letter addressed to the Commandant of Port Elizabeth leaves no doubt on this point.

I am directed by his Excellency, the Acting Governor, to transmit to you a diagram 5 morgen and 533 Square Roods of Land surrounding the Pyramid erected last year by order of his Excellency, Sir Rufane Donkin, in the rear of Port Elizabeth – you will be pleased to file this diagram with the instructions and Documents of your office of Commandant of Port Elizabeth, in order that it may be upon authentic record that this spot is not to be alienated, encumbered or built upon at any future period – the boundaries are defined by proper beacons which it is to be the duty of the Commandant to have carefully preserved.

I have the honour to be,

While the Cape Recife lighthouse was being planned in the late 1840s, the harbour board also tried to entice the government into building a lighthouse on the hill at Port Elizabeth itself. The project was actively supported by the secretary to government, John Montagu (1843-52). However, the governor was “unable at the present moment to estimate for this work, but I hope to do so shortly.“

The matter was raised again in the mid-1850s when the admiralty surveyor, Lt Joseph Dayman, pointed out that a lighthouse near the Donkin memorial would be invaluable to shipping at night. The project, however, did not get off the ground until early 1857 when the matter was discussed by the Harbour Master, H G Simpson, and assistant government engineer, Matthew Woodifield A.C.E. of the Colonial Civil Engineer’s Department.

It was decided that a fixed light illuminating 90 degrees seaward, 70 degrees white and 10 degrees each side red, visible for 8 miles in clear weather, should be provided.

In October, Woodifield arranged to look for a suitable light while in England. In September 1858, the Harbour Master reported that the mechanism for the proposed harbour light had arrived yet the spot where the lighthouse was to be built had not been settled. This event was followed in November by good news when the Governor, Sir George Grey announced that “the light will be treated as a public one, and [the] cost of it will be borne by the General Revenue.” In December, the Harbour Master upset public opinion by suggesting that the crumbling Donkin pyramid be pulled down and the stones used to build the lighthouse. Instead this fatuous proposal resulted in the monument’s restoration.

Nevertheless, almost another year went by before it was actually decided to build the lighthouse on the Donkin site. Initially the delay resulted from waiting for the British government to decide whether it or the Cape government was responsible for the cost of construction and maintenance. Once this was resolved, the decision had to be taken as to where to put it: on the port office or the Donkin. The Harbour Master estimated the respective costs to be £150 and £350. He felt that the light was to be specifically an aid to ships wanting to anchor at night, rather than it being a general extension of the existing aids to coastal navigation. The port office scheme was eventually scrapped when it was found that the existing building was not capable of supporting the extra weight.

Subsequently the Port Elizabeth municipal commissioners delayed matters by raising the question of the right to build on the Donkin reserve, which had been declared a public place in 1821, but the Harbour Master’s favoured location was the Port Office. Eventually they gave approval in November and the Harbour Board undertook to build the lighthouse on behalf of the government for £350. The lantern had cost £217 13s 3d in 1858.

Another nine months were to pass before the approval was given for construction to commence. Because the government engineer’s plan included accommodation “not contemplated in the original plan“, and would therefore exceed the original estimate, the lieutenant governor had ordered that the project wait until parliament reconsidered the matter.

Finally, in May 1860 the harbour board engineer, Alfred Warren, was given instructions to start the 17-metre lighthouse “forthwith”. It was completed a year later and came into operation on 1st June 1861, eleven years after Commandant Captain Francis Evatt had passed away. As a result, new sailing directions for Algoa Bay were issued. It was stated by captains of vessels at sea to be clear, powerful and visible for a distance seaward of some twelve miles. The light was a fixed occulting one as distinct from the revolving type which throws a beam seaward, as do most lighthouses along our coast. The official description read, “It is of the 6th order, the light being transmitted by a circular lens with prisms above and below. Height of lighthouse 55 ft. from base to vane, plastered cement, natural colour.”

The harbour board submitted its account of £942 18s 5d to the government which was £120 13s 1d more than the estimate. “The extra expense has arisen chiefly from the difficulty of procuring the stone for the plinth and the expensive process of dressing it.” The plinth was eventually provided by local building contractor, Charles Inggs, for £66 16s 1d.

Mr Hammond, one of the port boat crew, was appointed the first lighthouse keeper and he appears to have been well satisfied with his new and responsible post. In 1862, he applied for quarters to be built adjacent to the lighthouse.

During 1862, the harbour board made inquiries into the possibility of placing a time signal on the Donkin lighthouse. It was to be activated from Cape Town by telegraph, then still under construction. The initial cost was estimated to be less than £300, with a further £150 a year for maintenance. In March 1863, steps were taken to ascertain the cost of the time ball itself. Early in 1864, the harbour board again appealed to government to finance a time signal on the Donkin lighthouse.

The time ball was eventually put into place during July 1865. It was officially dropped for the first time at 1 o’clock on August 26 by a signal from the observatory at Cape Town. The Herald reported:

If we mistake not, this is a “feat” in the history of electric telegraph science hitherto unaccomplished…In no part of the world, we believe, has there been a timeball dropped…at a distance of five hundred miles by one through current.

The ball itself was made of wicker-work covered with black painted canvas. It was 1.2 metres in diameter and fixed to a 4.3-metre iron bar, which swivelled on a framework attached to the lighthouse gallery. When not in use, the ball hung downwards with the shorter arm of the bar uppermost. Just before 1 o’clock Cape mean time each day – except Sundays and public holidays – it was hauled uppermost ready to be dropped when the trigger was electrically activated from Cape Town. It was noted, however, that the “correct mean time is 1 hour 28 minutes 34.6 seconds”. They even made a contingency plan in the event that the ball was prevented from dropping at the proper time, then a red and blue chequered flag would be flown from the upper window of the Lighthouse and the ball dropped by chronometer at 1hr 05m 00sec, Cape mean time, or 1hr 33m 34.6sec, Port Elizabeth mean time.

Despite this technological advancement, early in 1866 the harbour board had to report that “the irregularities in its discharge have been so numerous that its value to the shipping has been seriously impeded.” These teething problems were overcome and the following year the board was able to report “the more satisfactory working of the time signal, which, under the supervision of the harbour master, Mr. Skead, has become a most valuable addition to the port.“

The first lighthouse keeper was Charles Hammond for whose family the adjoining cottage was built in November 1865. It was designed by P.M. Pfeil. Hammond kept meticulous meteorological records and served until his death in January 1881. In November 1929, the height of the lighthouse was increased by 30 to 40 feet because of interference of the electric lights from the Hill behind it. Moreover, the light was made more powerful by the replacement of the acetylene burner with an electric light.

The tower of the lighthouse comprised a simple seven metre high octagonal structure made of bricks supporting a lantern with fixed glazing. Early descriptions of the tower indicated that it was stone coloured. In September 1903 the panels were painting alternatively red and white. Presumably complaints must have been raised about the lighthouse’s visibility because four years later in 1907, the tower was repainted but this time only in white. Once again the colour scheme when circa 1921 a red band was painted midway up the tower.

Finally, in 1973, the Donkin lighthouse was taken out of service and replaced by a lighthouse at Deal Party.

The question may well be asked why the light should be extinguished after all these years of good service. For some time mariners had drawn attention to the diminishing conspicuity of the Hill Light, brought about by the ever increasing density of city lights. It is for this very reason that the Railways and Harbours Administration invited opinions from the regular shipping lines for an alternative.

After considering various sites north of the harbour, a position close to the mouth of the Papenkuils River was finally decided upon as serving shipping interests best.

A slender 23 m high aluminium tower, maybe not as elegant as the Hill structure, surmounted by a powerful revolving light has been erected on a spot just behind the dolos-protected shoreline, from where it sends its fully automatic warning signal seaward for a distance of over 15 kilometres. “Deal Light“, as it is known, was commissioned on 1st November 1973.

Why the name Deal Light?

Of the 51 British parties that landed with the main body on the shore of Algoa Bay in 1820, only two were not designated to be located in the Zuurveld. Pringle’s Party went inland to the Baviaansrivier valley near Bedford. The other, a small party from Deal in Kent numbering only 24 souls under their leader C. Gurney, were allowed to settle on the outskirts of Port Elizabeth, close to the Zwartkops River. These fisherfolk and their sailing craft have long since disappeared but the new lighthouse “Deal Light” commemorates them.

The Donkin was granted on a 99 year lease to the Municipality by the Cape Government on condition it be used as a parade ground for the nearby PAG.

Colours of the Donkin Lighthouse

The colours of the Donkin lighthouse have been changed a number of times.

>1929 – Lighthouse extended to its final height and painted white

When a Lighthouse Retires by H.L. Huisman in Looking Back March 1974

Prince Alfred’s Guards: In the Line of Fire

New Brighton: The Case of the Missing Game Birds