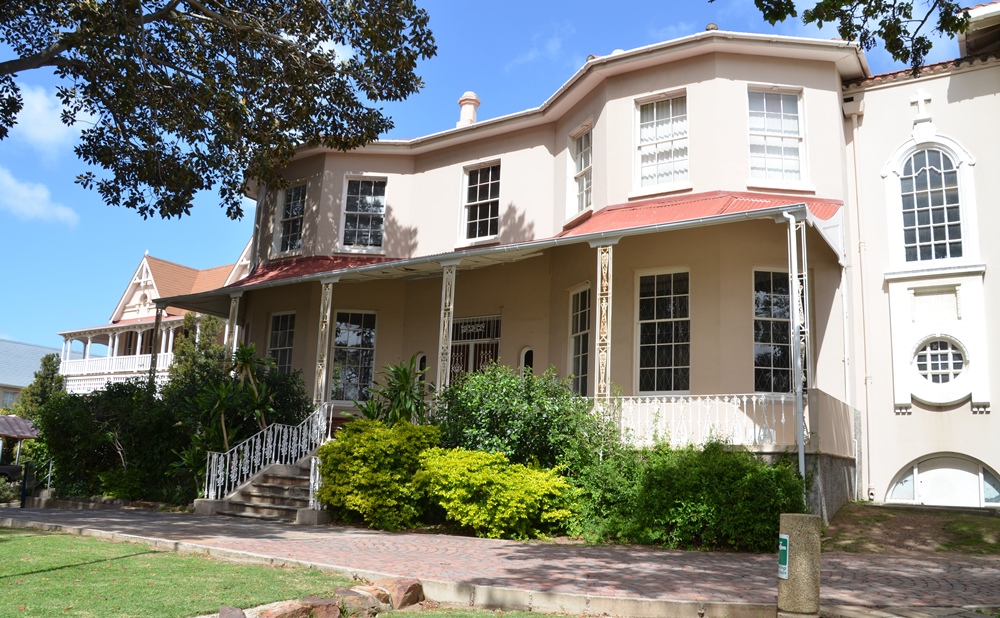 For the purposes of this blog, the architectural styles from the Late Georgian, in which No 7 Castle Hill was constructed, to the Edwardian Style which predominated from 1890 to 1914, will be covered. Unfortunately, many of these structures are being demolished, altered or “renovated” in such a way that their original character is lost. Perhaps, in a small measure, one’s understanding of the various styles will culminate in their appreciation and hence a desire to preserve them.

Also briefly discussed is the step-change in the architectural elegance of the second generation of commercial buildings constructed in Main Street.

Main picture: Fleming House at 20 Bird Street is a good example of architecture in the Regency Style

Building styles were never slavishly imported by the settlers even though they built in the style of their mother country. The local styles which emerged were a combination of the original, modified by the materials available and to suit the climate. This process is encapsulated by the Cape Dutch style which embodies elements of both the Dutch Baroque style and the Rocco styles.

Much like dress making patterns which our “fore-mothers” used in order to make their families’ own clothes, carpenters and plasterers were greatly aided by the use of pattern books and precast elements. Mouldings could either be purchased ready-made or the tools to make a particular moulding could be acquired. In addition, the purchase of items such as cast iron columns, ornate balustrades and sashes was facilitated by the issuance of catalogues by the merchants.

Georgian architecture is the name given in most English-speaking countries to the set of architectural styles current between 1714 and 1830. It is eponymous for the first four British monarchs of the House of Hanover—George I, George II, George III, and George IV—who reigned in continuous succession from August 1714 to June 1830.

Georgian architecture is characterized by its proportion and balance. Simple mathematical ratios were used to determine the height of a window in relation to its width or the shape of a room as a double cube. More to the point it was a decisive rejection of the ornate English Baroque style and an emphasis on “plainness.” In Port Elizabeth, this style was mainly used in the erection of cottages and semi-detached dwellings.

An example of a modest Late Georgian double storey cottage in Port Elizabeth is the hillside parsonage house – No 7 Castle Hill. Features to note are the chimneyed gable ends, slate roof, the plaster window surrounds and the upper windows being close to the eaves and the symmetrical façade.

Regency architecture refers to classical buildings built in Britain during the Regency era in the early 19th century when George IV was Prince Regent, and also to earlier and later buildings following the same style. According to Danie Theron in the book 19th Century Port Elizabeth, the Regency Style “was a colourful extension of Georgian architecture. Buildings became less solid, window and door surrounds were emphasised and the top of the windows were close to the eaves. Bow windows and verandahs became popular. Buildings appeared to be light and elegant. Decorative bargeboards were used on gable walls.

Furthermore, Danie Theron continues that “The Donkin Street houses are examples of Regency verandah style double storey terrace houses. There is also a strong Georgian feeling, especially in the use of the gable and the placing of the windows.”

Fleming House in Bird Street is a fine example of a Regency double storey villa disporting a delightful sweeping staircase in the entrance hall. Yet another example of this style is the Donkin Street terrace houses. These feature a stepped gable with cantilevered timber balconies and “trellisworked” balustrades.

Other examples are this style are the chimneys where the chimney pots were usually imported earthenware and patterns fashioned on the bargeboards being fret-sawed into fanciful patterns.

In the United Kingdom and former British colonies, a Victorian house generally means any dwelling built during the reign of Queen Victoria (1837–1901).

Victorian houses follow a wide range of architectural styles. Starting from the early classicism inherited from Regency architecture, the Italianate style gained influence in the 1820 and 1850s, and the Gothic Revival style became prevalent by the 1880s. Later in the Victorian era, the Queen Anne style and the Arts and Crafts movement increased in influence, resulting in the transition to styles typically seen in Edwardian houses. Victorian houses are also found in many former British colonies where the style might be adapted to local building materials or customs, for example in Sydney, Australia and Melaka in Malaysia.

In Port Elizabeth, Danie Theron distinguishes three distinction expressions of this Style viz Early, High and Late Victorian. A similar manifestation and progression in this style was evident in the UK as well. Generally, Danie Theron characterises the Victorian Style as representing simpler structures which were then decorated with cast iron and corrugated iron being used extensively. During this era, French doors and bay windows were fashionable. Often buildings were barn like structures with ornate facades in which the attention was lavished upon the front edifice.

The first iteration of the Victorian Style that Theron identifies is the Early Victorian when classical decoration was in vogue, often leading to the development of an Italianate style, using heavier mouldings to openings. Examples of this period include the double storey dwellings forming part of the Newington Road terrace houses.

As the Gothic style grew in popularity, the Early Victorian morphed into the High Victorian during which the Victorian love of strong colours led to polychrome buildings. The Port Elizabeth Women’s Club in Bird Street is an example of a double storeyed High Victorian semi-detached house with a dividing parapet wall, finials and prominent gables.

The denouement of this style was referred to as the Late Victorian. The Queen Anne Revival, which was part of the Arts and Crafts movement, was popular during this period. Buildings were asymmetrical and picturesque. Cavendish House in Cuyler Street is a fine example of a Late Victorian double storey cottage.

Simplicity and elegant style was ditched for ostentation. Buildings were now as highly decorated as wedding cakes. As such, they lacked focus but this was compensated for in their abundance of rich treatment and high-relief mouldings.  Pembridge House in Bird Street is an example of an Edwardian double storey villa.

For me what is most distressing is the fact that the buildings in the Central / Hill area which once represented a mother lode of buildings which were authentic representations of their original styles, is rapidly drawing to a close. Every block contained unvarnished gems. In a large measure except for the replacement blocks of flats, this area was a museum to architecture. In the past 50 years, renovations have been continually made which are not faithful or consistent to the original style thereby destroying the integrity of their original architectural style.

Lastly we have witnessed the generational change in the architectural styles of commercial buildings during the period 1850 to 1900. To my mind, many of these replacement buildings represented a retrograde step as regards architectural elegance. The new Standard Bank building epitomises the trend bland box-like buildings

Port Elizabeth of Yore: The Birth of the Standard Bank