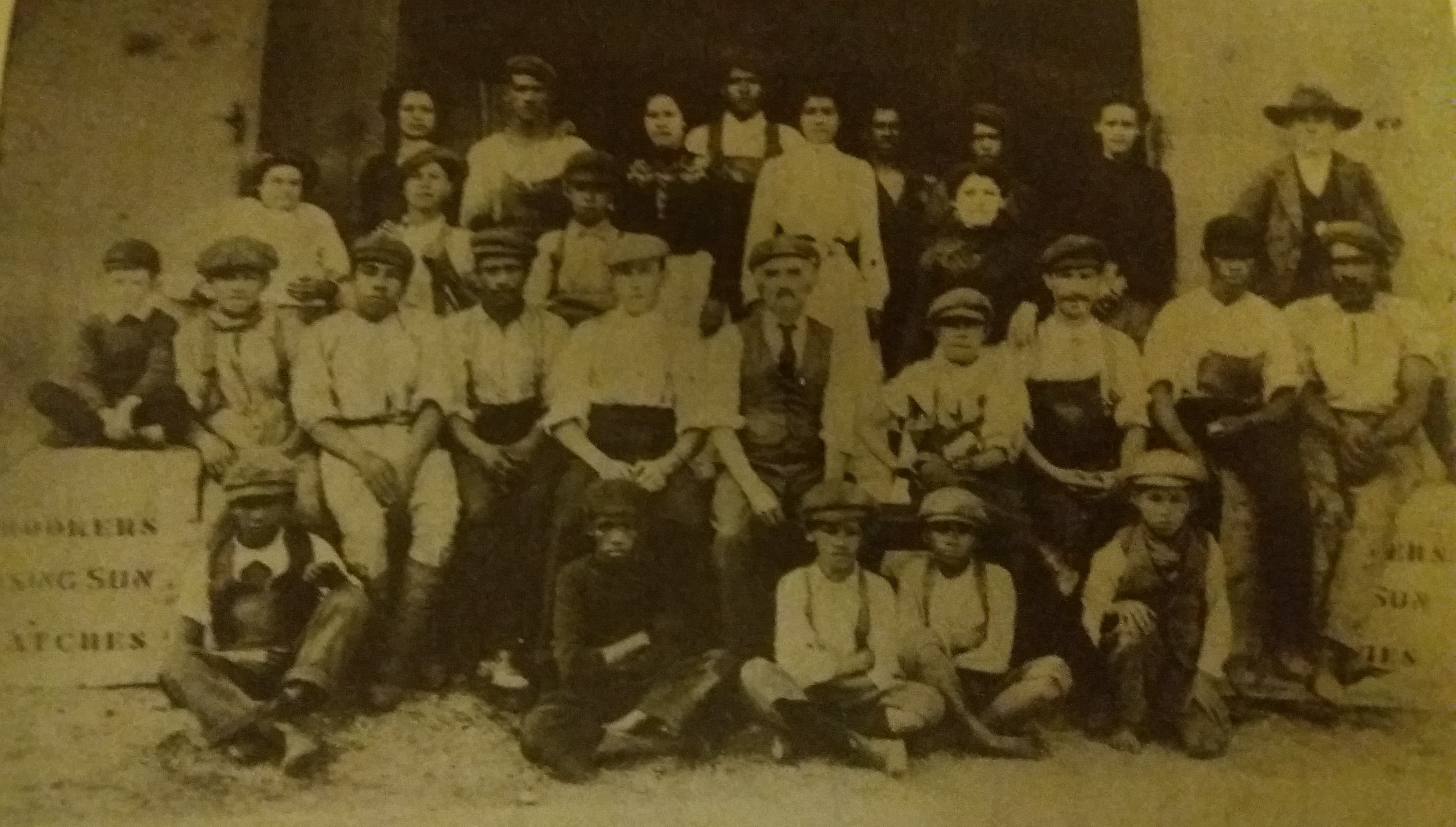 In the publication “The Match Industry in South Africa,” Mr. D.R. Leith notes the following: “Matches were first manufactured in South Africa in July 1885, in Port Elizabeth, by Mr. Thomas Milward.”

After an auspicious start in Port Elizabeth, match manufacturing operations were set up elsewhere in South Africa. In 1903, the light of a new industry was extinguished in Port Elizabeth when the factory was shuttered.

This is the story of why that initial attempt did not ignite a new industry in Port Elizabeth.

Main picture: The staff of the first match factory founded in Port Elizabeth in 1885. Mr William Brooker is seated in the middle, with his son, W.H. Brooker on his right. The other sons, C.F. and A.V. Brooker are, respectively the lad in a hat at the right in the back row, and the small boy seated on a case at the left. The photograph was taken circa 1902.

Every town, province or country will only attract those industries in which it possesses a competitive advantage. This trump card, if you will, can be anything from geography i.e. location, climate to natural resources.

The first two, and only industrial developments in Port Elizabeth, can be characterised as stemming from its geography. First there was the Wool Industry where the town’s hinterland was its source and the harbour its revenue generator. Then came the motor vehicle. As it was cheaper to import vehicles on a CKD basis, Port Elizabeth was the natural location to assemble these CKD kits. As local manufacture of components became a reality, the competitive location switched to the market and the source of steel rather than the port.

Port Elizabeth has had to live or die by these two industries. Casting aside the current search for replacement industries to vehicle manufacture as Port Elizabeth’s third industrial/commercial revolution, one industry which could partially have filled a niche was industry such as the match manufacturing industry.

Creation of an Industry

Prior to July 1885, all matches consumed in South Africa were imported. Once local manufacture occurred, imports swiftly dwindled to a fraction of their previous levels. The table hereunder illustrates this precipitous decline from a peak in 1884.

An excellent source of information with regard to life in this bygone era is the Cape of Good Hope Blue Book.  This is a veritable treasure trove of information. In the case of match manufacture, as opposed to match making which bears a relationship connotation, is first mentioned in this source book in 1884 & 1885. Both relate to the registration of Trade Marks to companies domiciled in Cape Town. Even though it appears to have been a legal requirement that such registration is required prior to commencing operations, neither company actually appears to have started production as no factory is recorded for Cape Town.

Interestingly, even the indefatigable John Paterson can claim a role on instigating the establishment of the match factory in Port Elizabeth. According to Thomas Milward, the idea of establishing a match factory in Port Elizabeth was presented to him on a homeward bound liner by a fellow passenger, an Aberdonian named Paterson. Milward does not specifically refer to this passenger as John, yet surely it should be, as John Paterson was originally a native of Aberdeen for which he held a special candle. Apparently, Paterson had alluded to him that he possessed some experience in match making in England and that, furthermore, he had already acquired some premises in Kirsten Street, Port Elizabeth, for that purpose.

Like many other industries at that time, match making was not mechanised or automated in any way and could be characterised as a cottage industry in which the whole family participated and carried out the work in their own homes. Mr. Milward managed to persuade seventeen workers, mainly families, to emigrate to South Africa to staff his factory. The plant was of the crudest type where splints were imported ready to dip. It is recorded in booklet “The Match Industry in South Africa,” that the first match factory in South Africa was financially a failure. And after two years, the partnership with Mr. Paterson was dissolved. Given that Paterson died in 1880 and that as the first match factory commenced production in 1885, the date of the venture’s collapse would be 1887 or possibly even 1888. Whichever year it was, Paterson would have been deceased for at least seven years so D.R. Leith’s comment must surely be incorrect.

Not to be despondent or browbeaten, Lazarus must have had a alter ego in Milward when he elected to carry on. In 1887, Milward met his match (sic) in William Brooker when William, an ex-employee of the famous British firm of Bryant and May, arrived in Algoa Bay. A meeting of minds occurred; a spark was ignited. As a consequence, a new partnership was concluded on the basis that Milward supplied the cash and Brooker the experience and technical expertise.

As no description is extant of the process employed at the Rosebank Match Factory can be found, and assuming that the process employed at a match making plant in Kimberley is similar, the process would have been as follows: “Matches were literally made by hand – everything from veneer peeling to labelling boxes. The family used to pass the time in the evenings making boxes and visitors dropping in frequently lent a hand. The wood used was willow, procured from the banks of the Vaal River, and neither splints nor boxes were imported. The output of the “factory” was 50 gross per day, selling at 6/- per gross.”

The first matches made in South Africa were the difficult and dangerous “Phosphors” but “Safeties” were introduced at an early stage.

By 1890, there were five match factories operating in South Africa:

In 1891, the Port Elizabeth Match Factory, owned by Messrs. Mackie, Dunn & Co. commenced business in Stone Street, but within a short period of time, both Port Elizabeth factories were taken over by the Rosebank Match Company, which also absorbed the Wynberg Factory. In June 1903, the Port Elizabeth works were closed down and the buildings sold to the South African Breweries Ltd with all machinery being transferred to King William’s Town.

Mr Brooker left the company and started a tiny factory of his own in Green Street, which he later sold to Mr. James Randall for £750. With the arrival in South Africa of two directors of Messrs. Bryant and May in 1903 and 1905 respectively, amalgamation of all factories into one organisation took place, and the Lion Match Company was formed.

As a consequence, match making in Port Elizabeth had come to an end.

Taken from Men of our Times Page 291

“Born in 1853 at Belper, Derbyshire, England; emigrated to South Africa in 1881, going straight to the diamond fields. In partnership with Alexander, acquired a block of claims which were worked successfully and later absorbed by De Beers. In 1889 established a match factory in Port Elizabeth, later purchased by the Rosebank Match Company. He continued to act as manager for a time, but later took over the management at Wynberg, becoming mayor of the town and one of the largest landed proprietors in the Cape Peninsular. He was a prominent Freemason and still (in 1906), a large shareholder of the Lion Match Company.”

Port Elizabeth of Yore: The Birth of the Standard Bank

Port Elizabeth of Yore: John Paterson vs PE Municipality in 1863

Port Elizabeth of Yore: The Saga of the Obelisk

Port Elizabeth of Yore: Paterson and the Eastern Province Herald