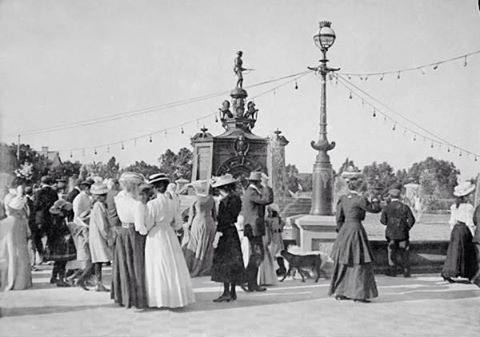 This blog will only cover three of them starting with the least known, the Grey High School war memorial. Then I will cover the memorial of the Prince Alfred Guards and then finally the Cenotaph in St George’s Park.

The Grey High School was founded by John Paterson and named after Sir George Grey, the Governor of the Cape Colony from 5th December 1854 until 15th August 1861.

In 1914 South Africa, then still a Union and part of the British Empire, entered the First World War on the side of the Allies.  Of the nearly 700 Old Greys who served in this war, 59 sacrificed their lives. On March 15, 1923, a memorial to these men was unveiled in the school quadrangle by Major-General Sir Henry Timson Lukin, K.C.B., C.M.G., D.S.O.

Designed by F. Pickford Marriott, it was made of granite, bronze and verdite. The bronzes were modelled by Gilbert Ledward of London to Marriott’s designs with the words “mors janua vitae” – the door of life and death – inscribed on it. The Memorial is situated against the wall of the assembly hall in the quad of the school. Inside the De Waal Hall, around a doorway, are panels with names and, in coloured gesso, the figures of Sir Galahad, an angel and St. George with the dragon at his feet

The school has a Remembrance Day Cadet Parade on 11 November each year with a flypast over the school quad at 11 minutes past 11 am.

Memorial for the Fallen of the Prince Alfred Guards

Having been engaged in a number of battles including the Anglo-Boer War, some form of memorial to the dead was required. The solution proposed was to use the top of a planned reservoir in St. Georges Park for this purpose.

The excavation for the reservoir was commenced at the end of August 1906 and on 6th November 1907 the Treasurer-General, the Honourable Edgar H. Walton, before a large and representative attendance, turned the water into the new Service Reservoir in the St. George’s Park. The final cost of the reservoir was less than the original estimate of £15 525.

The Prince Alfred’s Guard Memorial is one of the largest and heaviest architectural products in the Victorian idiom manufactured by the Saracen foundry of Walter MacFarlane of Glasgow in Scotland. The structure is a fitting tribute to the memory of the officers and men who made the supreme sacrifice in the Transkei War (1877), Basuto War (1880-1881), Bechuana War (1897) and the Anglo Boer War (1899-1902). At the foot of each tablet is a laurel wreath. The Prince Alfred’s Guard and the Municipal Coat of Arms are placed on alternate sides of the base immediately over the four jets of water which issues from the lion’s mouths. 0n the top of the central pedestal is a life-size figure of a sergeant-major of Prince Alfred’s Guard, in full dress and standing at the “charge” and immediately below him are four lions, each holding a shield.

An article in The Herald dated January 7, 2005, it is revealed that giant antique urns vanished from this historical St George’s s.ite

Guy Rogers reported that “Five giant antique urns have been stolen from a national monument in St George’s Park and the innovative skullduggery behind the theft has officials perplexed.

The urns were made by Joseph King and Co in Sturbridge, England, and purchased and shipped across especially for the unveiling of the Prince Alfred Guard (PAG) Memorial and the St George’s Reservoir, in 1907.

The reservoir takes water piped in from the Churchill Dam, above Humansdorp, and channels it to businesses in Govan Mbeki Avenue. The memorial is situated on top of the reservoir and the whole site is a national monument.

Made of terracotta and about a metre high, the urns had plants in them and were cemented into the balustrade around the memorial’s central pond. A metro parks department spokesman said yesterday the disappearance of one of the urns was first noticed about four months ago by engineers contracted to renovate the aging reservoir.

“We reported it to the police and to our metro security department, but three more disappeared and then a final one in the following months without us managing to stop it. There is no way that one guy could carry these things. It must have been a gang with a vehicle. “We just hope they’re standing in a garden somewhere and that somebody will recognise them and call us.”

The training officer of the 150-year-old PAG, Captain Terry Pattison, said the regiment was perplexed and angry about the theft.“We had to move one of the urns some years ago and it took eight men to do it. They are tremendously heavy. The thieves must have used a truck and a crane – and one really wonders how this was done without the resident authorities noticing anything.”

At the entrance to St George’s Park stands the Cenotaph. The memorial was sculptured by James Gardner in 1929 to commemorate the men who died in the First World War (1914- 1918). It features St George buckling his sword after slaying the dragon, as well as the figure of a mother and her children. Ultimately, those who fell in the Second World War (1939 – 1945) were commemorated as well.

On November 11, 1929, Port Elizabeth’s long awaited War Memorial, the Cenotaph, was unveiled by Mrs WF Savage and dedicated by Canon Mayo, with Mayor Jas Scott being in attendance.

Mrs Henry Forbes, also a former Mayoress who had lost sons in the war, was to have shared the honour with Mrs Savage, but was prevented by illness from being present.

The memorial was the work of James Gardner of the Art School. Sculptured in 1929, it was was erected by Pennachini Bros. Interestingly, the models for the woman and children were members of the family, Doris Gardner, her son Frank Gardner and her daughter. The general idea is that the lower portion represents the earthly life which uplifts gradually to a symbol of the heavenly life, which is the upper portion.

Gardner was in charge of the School of Arts and Crafts at the Technical College in Port Elizabeth. He registered as a member of the Institute of South African Architects in 1927. In 1959, he was listed as a member of the staff at the University of Massachusetts. He retired in 1967. He was also responsible for the sculptures on the Richardson Building in Market Square.

Chastity is observed in the figures in the round and the relief panels.The base has the shape of a sarcophagus around which runs a relief panel, having two side groups in the round. Rising from the lower sarcophagus is a shaft which tapers and merges into a shape suggestive of an urn at the top, round which is a frieze of cherubs playing musical instruments.

The mother is seated and has gathered the child in her arms for protection, whilst on her face the expression is of the calm, pure honesty of purpose of the whole of the British Empire.On two sides of the memorial are groups – one representing a mother and child and the other St George, placed so for the purpose of symmetry – that of the warrior’s wife symbolises the protecting of the home, and St George who has done his duty by crushing the evil threatened to our homes.

St George is unbuckling his belt and throwing off his accoutrements, having obtained his objects.

The relief panels are representative of the warrior starting out from civilian life and going through the various phases of the war – naval, military, nurses, etc.

The Memorial stands on a base of four steps, nine inches each in height and one foot six inches in tread.

It is further heightened by a plinth one foot six inches in height and another nine inches in height. These serve as a platform for the religious services which are held at the Memorial from time to time.

A band of lettering of suitable wording binds the whole of the base together just below the sarcophagus, suggestive of the ties of the Empire.Rising from this on two sides are panels for the names of the fallen and two bases for groups on the two other sides attached and in front of portions of the actual base of the Memorial.

On 13th November 1929, it was announced that the Eastern Province dug-out of the MOTHs would act as caretakers of the monument.

After the Second World War memorial panels were added to the walls behind the Cenotaph. In 1994, sculptor Anton Momberg restored the monument.

Port Elizabeth: A Social Chronicle to the End of 1945 by Margaret Harradine