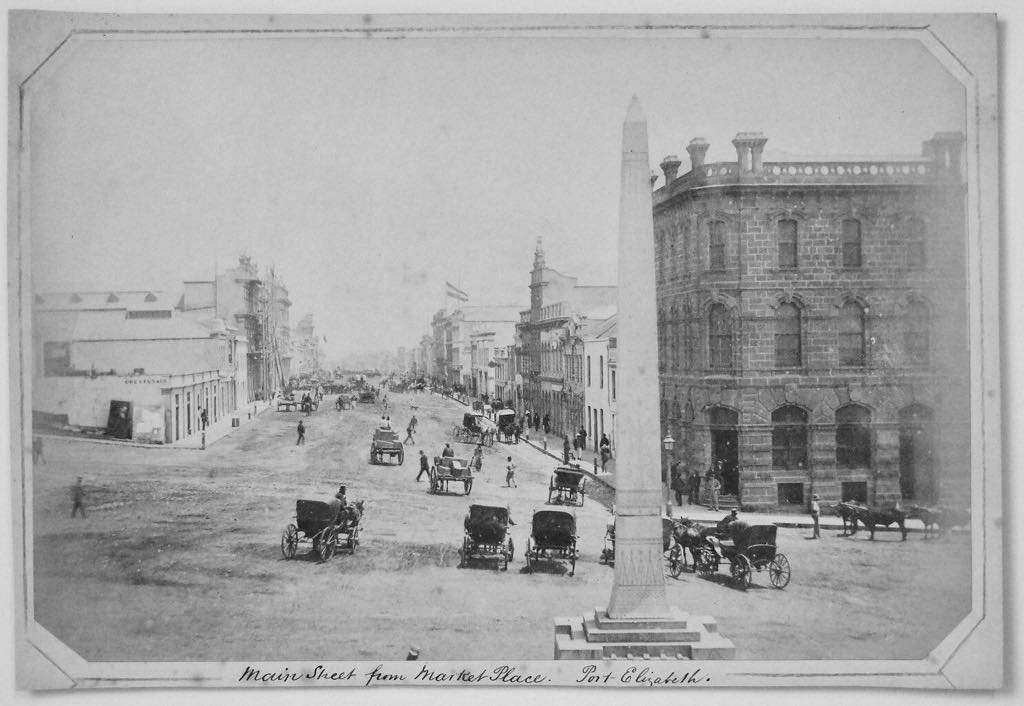 Much like the current tensions between Uber and the Metered Taxis embroiling the taxi industry, likewise there was a similar tense relationship in 1873 between the various modes of transport and operators with shysters and hucksters prevalent. In this era the antagonists were the horse-drawn trams, officially known as omnibuses, and hackney carriages.

To regulate the operations of the various modes of transport, the Municipality drafted a set of Regulations and gazetted them on the 29th July 1873.

Main picture: Cabs in front of the obelisk

Types of vehicles within the ambit of the Regulations

Officially these regulations were referred to the Cab and Omnibus Regulations but they were broader in scope as they covered any vehicle used for the conveyance of passengers for hire in the town.

The word omnibus being the ablative form of the Latin word omnis, means “for all,” referred to an enclosed horse-drawn passenger carrying vehicle in the nineteenth century. Later in the 20th century, the word omnibus was abbreviated to the modern word “bus.” As the horse-drawn tramway network was only opened on 14 May 1881, one can safely presume that the Council was aware of the plans to install a tram system in Port Elizabeth and hence their proactive inclusion of this futuristic mode of transport within the specific remit of the Regulations. This fact will become pertinent when one reads of certain conditions which only apply to the proposed introduction of trams.

The Regulations specifically refer to Hackney Carriages.  These were public transport vehicles in which the driver sits in front of the passengers whereas in the case of a Hansom Cab, they sit above the passenger compartment. Both of these types of cabs could carry passengers for hire or reward, be hailed by prospective passengers in the street and park on a rank to await the approach of passengers. Both forms of cab had a propulsion system of one horse-power which probably precluded them from offering their services in hilly precincts. One wonders whether modern day unions would accept the working conditions of the drivers as they were exposed to the elements. This must have been especially torrid in England given the fact that inclement weather or rain can be expected on most days.

In Port Elizabeth, the most prominent rank was in Market Square clustered around the Obelisk. This served two purposes. One was its prominence as the central area in town whereas the other was more prosaic: a watering place for the horses as at the base of the obelisk were a number of water troughs . The word taxi only entered the English lexicon with the introduction of the taximeter timing system which created the word taxicab implying a cab with a meter as opposed to using fixed prices to designated destinations as was previously the custom.

Essentially any method of conveyance for the transport of passengers for a fee was included within the ambit of these regulations subject to these vehicles being examined and approved by the Town Clerk.

Each vehicle had to be duly registered and numbered before they could ply their trade. The Registered Number had to be affixed to some conspicuous part of the left outside with the numbers being white on a black background and at least two inches in height. This was probably the forerunner of the ubiquitous number plate today.

Each driver or conductor was mandated to wear a badge with the number corresponding to the vehicle’s registration number. Note that it was only the proposed omnibuses or trams that would require a conductor.

The fares had to be painted on the outside of the door. The prescribed tariffs were categorised as a fare per distance, fare for time engagements and penalties which the operator could charge for being detained or delayed.

In the case of disputed fares, the hirer could require the driver to proceed to the “Police Court,” if the Magistrate was sitting at the time. If not, to the Town Clerk’s office where the complaint was entered and decided by the Magistrate at the next sitting of the Court. In 1877, the Police Court was located in the Commercial Building on the current site of the Main Public Library.

As befits any regulating authority, the regulations cover all contingencies as did these Regulations.

Speed: When hired by distance, the driver was obliged to drive at a speed not less than six miles per hour and in the case of a time engagement, at not less than five miles per hour. Without using speedometers, one wonders how it was possible to accurately determine one’s speed unless the drivers used charts and maps.

Lamps: All public cabs were required to light up their lamps ten minutes after sunrise. One presumes that this regulation should have been prefaced by the words “by no later than..”

Refusal of a fare: A driver could not refuse an offer of engagement unless actually hired at the time of which satisfactory evidence had to be provided. What form this evidence would take to be acceptable is inconceivable.

Luggage: Each passenger was allowed only 20lbs of luggage. The driver was compelled to deliver all lost luggage to the Police Station within twelve hours. The owner was compelled to pay the reasonable expenses of the driver for “his care and trouble.” In the case of a dispute, the Magistrate would determine the amount.

Registered Number card: When required, the driver was required to hand the Hirer a card bearing the Registered Number of the Carriage. Under no circumstances, could a driver refuse to give his number when requested to do so by a passenger.

Cab stands: The Regulations only recognised two locations where cabs could be stationed. These were in Market Square and opposite the Independent Church on the corner of Main and Donkin Street. Moreover they were not permitted to stand in the public streets except at such places as the Town Council could make known.

Operating area: Cabs were entitled to operate in all parts of the Municipality whereas the omnibuses were restricted to running between North End and Market Square every quarter of an hour.

Licences and penalties: All owners as well as drivers were required to be licenced. Any person contravening the regulations was liable to a penalty no exceeding £5 or one month’s imprisonment with or without hard labour.

The Port Elizabeth Directory and Guide to the Eastern Province of the Cape of Good Hope for 1877 by Anonymous (1877, J.W.C MacKay, Port Elizabeth)