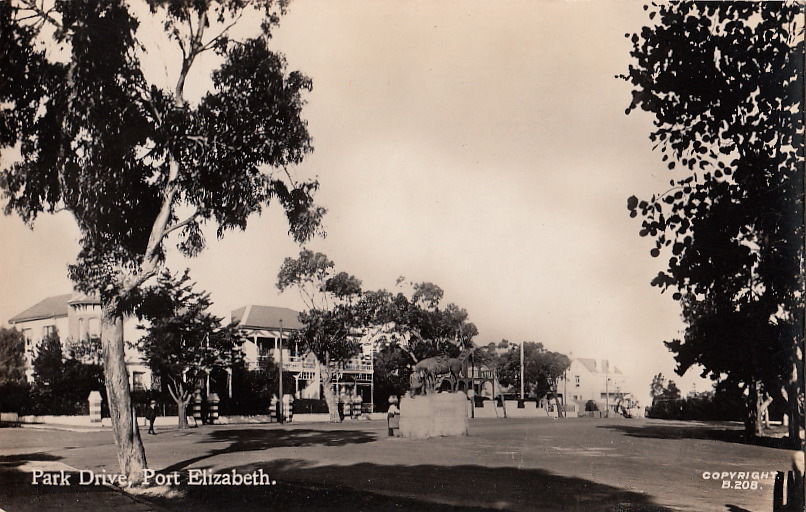 These are excerpts from the notes of Mr. C.G.H. Skead on the early days in Port Elizabeth written in 1939. They provide a personal view of the various activities and the development of shipping at that time. As he was born in 1871, these reminiscences probably relate to the period 1890 to the 1920s.

Main picture: Park Drive when it was considered to be “outside the Bay”

Port Elizabeth town, as I first knew it, extended south as far as Rudolph Street [in South End] and up the slope of the South End Hill, [which was] mostly occupied by boatmen and coloured folk and [was] a very rough place. In the centre, it extended to about Rink Street and across to Hospital Hill. It was said at this time that when Patterson built Myrtle House in Park Drive, he had gone “outside the Bay,” but when Bain, the Mayor, built the large double storey house, now incorporated in the Nazareth House, he was said to have “gone farming.” Northwards, the town ran along Queen Street, straggling along Princess and Adderley Streets with odd houses dotted about the flats. The Salvation Army Boy’s Home, on the rise beyond the North End Park, then McLundie’s house was quite isolated. 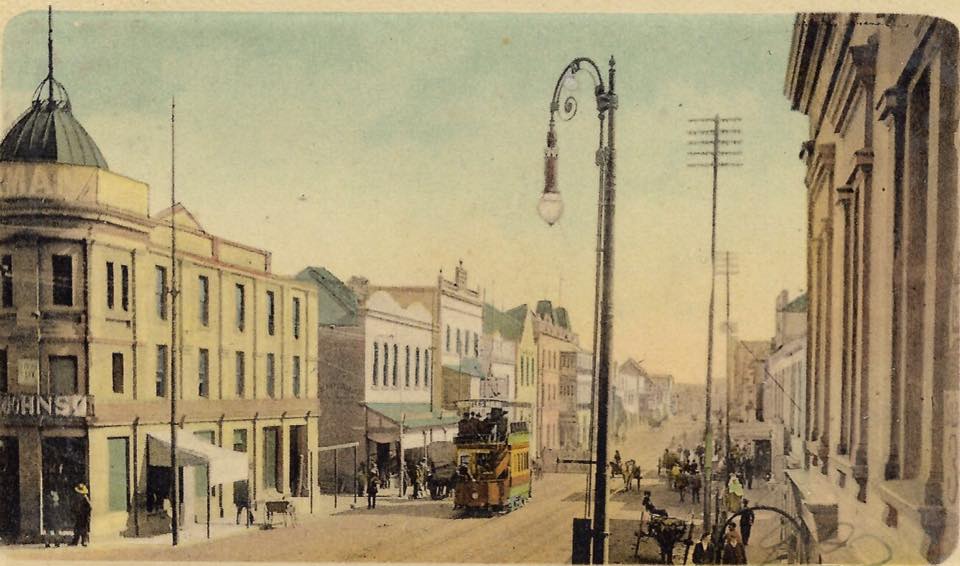 Looking North from Queen Street in 1911

The jail was there then, and experienced a great time when O’Donnell was lodged there after shooting Carey, the Irish informer, after the Phoenix Park murder in Dublin. He had journeyed on friendly terms with Carey all the way from Southampton to the Cape, and when rounding Cape Recife on board the coaster Melrose, he shot him dead. The Prince Alfred’s Guards was called out to guard the jail against a possible rescue by local Fenians. At night, one of the sentries gave the challenge and shot a donkey! The great joke for some time was “Who shot the donkey? No 2 Company, P.A.G.!” Further out was Cradock’s Place, the historical residence of Frederick Korsten, then occupied by the Chases and Fairbridges. 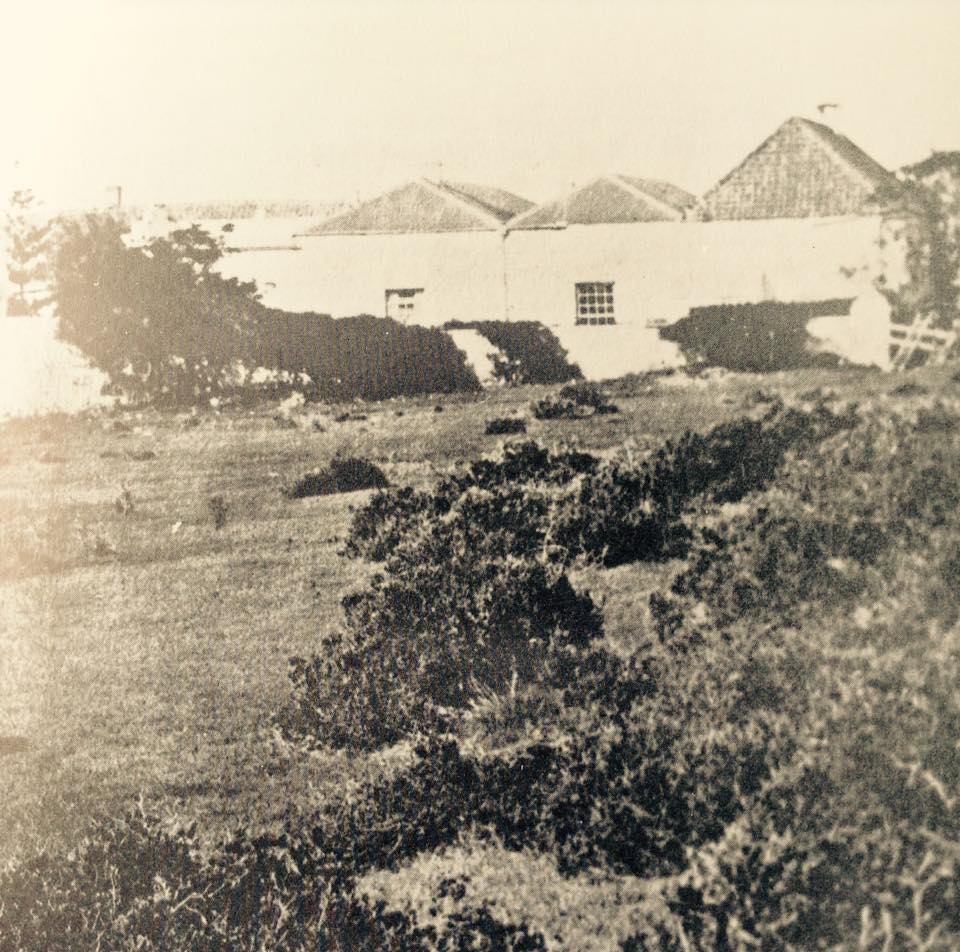 One of the native locations was situated on Hospital Hill, called Stranger’s Location where MacKay and Irvin Streets are now, and the other, called Gubb’s, where Mill Park is now. Between the two was bare veld, and battles royal were frequently fought between the two locations. Detachments of the P.A.G. were more than once called on to intervene. One great improvement from those days is the disappearance of the native canteens [shebeens], which utterly demoralised the natives. 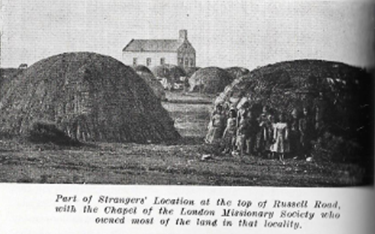 The Malay Quarter was in Strand Street and contained two Mosques, but it was a dirty, rough place, and a part to keep away from. Eventually, in about 1880, the Railways took over the property between Strand and Railway Streets, and the Malays were moved to South End.

The Military Reserve, as its name indicates, was reserved for military purposes, and there were no houses on it except for the barracks below the Fort, until you reached Gordon, then called Stormy, Terrace.

An interesting place for the boats was the “Vlei”, now Trinder Reserve. It was an open dam and a great place for sailing boats and catching paddas. It was said that in earlier years Bishop Merriman, who travelled around his Diocese on foot reached the Vlei, then surrounded by rushes, undressed and bathed, and then went on to breakfast at the Phoenix Hotel. 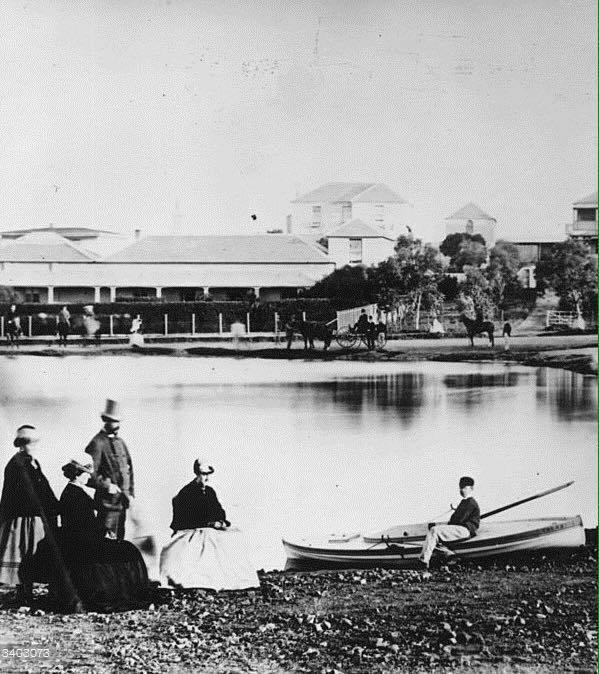 Floods used to cause great damage in the runoff down the Hill roads. I have several times seen White’s Road scoured out with great holes into which an ox wagon could easily be dropped. Russell Road suffered frequently and people were drowned by being washed into the drains. One native was washed right through but came out alive on the sea front below Griffin Street. On one occasion such great quantities of rubble were washed down Cooper’s Kloof [now Albany Road] that when the tramline was cleared in Queen Street, only the tops of the single-decker trams could be seen. Today storm drains and tarred roads prevent this from recurring. 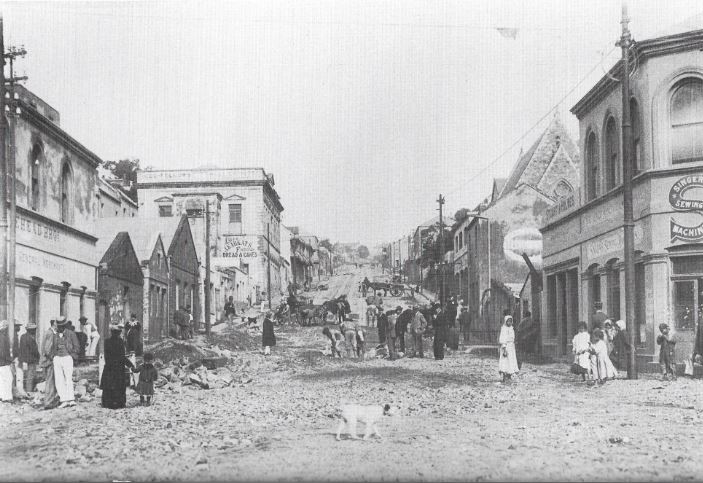 Russell Road after the flood in 1897

The most severe flood was in the Baaken’s River in November 1908, when there is reason to believe that 12 inches of rain fell in 12 hours on the watershed between Paikin’s and Greenbushes. The river, coming down, wrecked a wood and iron building, which jammed against the road bridge in South Union Street. The incoming tide helped to push the water back until the whole valley was flooded. The water overflowed into North Union and Commerce Streets, finding its way over the road at the foot of Jetty Street, into the sea, causing immense damage. A large lawsuit followed, which the Town Council all but lost. A similar flood had occurred some fifty years earlier [presumably in 1867] and should have proved to be a warning. 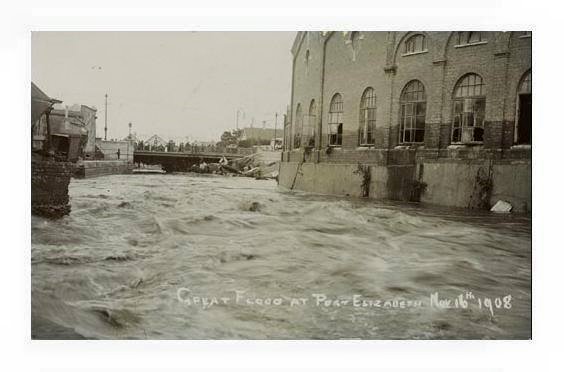 The town passed through various stages of development. The opening of the diamond fields in the early ‘70s created a boom, which suffered a severe setback with the collapse of the diamond mines in Kimberley, until Rhodes amalgamated the mines and put diamonds to the fore again. There were ups and downs till the gold fields opened. Port Elizabeth was the only available for dealing with the growing traffic until East London opened up and obtained a good share, and then there was great rivalry and jealousy. Then Durban opened her fine harbour and got all the heavy traffic for Johannesburg owing to the shorter distance for haulage. This was shared still later by Lourenco Marques.

However, all this time the country was developing fast and railways were built everywhere. Wool and hides grew to be huge items of export and the gold field’s development extended trade and business in all directions. The gold slumps of 1888 and 1896 upset the apple cart badly, as of course did the Boer War, but the discovery of the cyaniding process eventually established the gold fields on a definitely sound basis, which was naturally reflected at the coast and throughout the country. 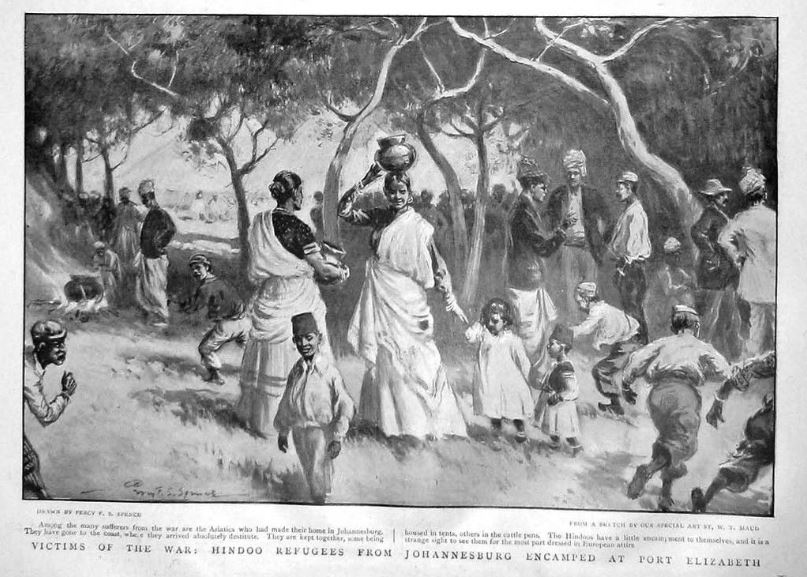 In those days, there was little in the way of amenities as known today, and each person had to make their own interests and amusements. Cricket and football were played on very rough grounds. A little tennis, no sea bathing as it is known today, riding for those who could afford to keep a horse, while one who could run a Cape Cart and two horses was a rich man. Cycling on the penny-farthing high bike was a novelty. I remember with pride when I imported my own, bought out of my own savings at a cost of £19 when I was nearly twenty years old. Then the solid tyred safety bicycle was introduced and soon after pneumatic tyres took the place of solid. Once a year, a sports meeting was held in St. George’s Park on a track of a quarter of a mile in circumference, around the Union Cricket field. Howard Sherman was a very keen worker, and these meeting were most successful. The Caledonian Society also ran an excellent Scotch sports gathering each New Year. The annual race meeting at Fairview was a great event and drew entries from all over the country, but Johannesburg eventually drew off the principal owners, and the local meeting declined. 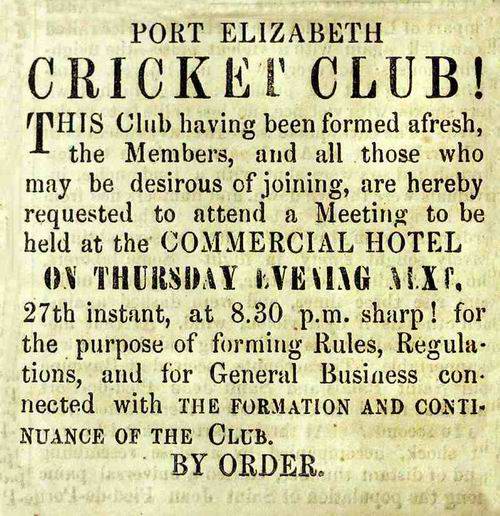 An occasional touring company called and provided evening entertainment, notably Disney Roebucks’, a really fine combination of actors. The Wheelers with their farces were also very entertaining, and Scarelso Operatic Company was excellent, at least so we thought. Fillis’ Circus was quite a good show. Otherwise, there was only private hospitality and occasional subscription dances, while for men without homes, only billiard rooms and pubs offered entertainment. Twice a week, the Gymnastic Club turned out in the Drill Hall, and at one time had over eighty active members. In about 1880, the Port Elizabeth Institute [now the Athenaeum Club] was formed to meet the need for recreation for young men, and was a great success. Bioscopes later helped to afford amusement, while outdoor sports such as sea-bathing, golf etc were indulged in. 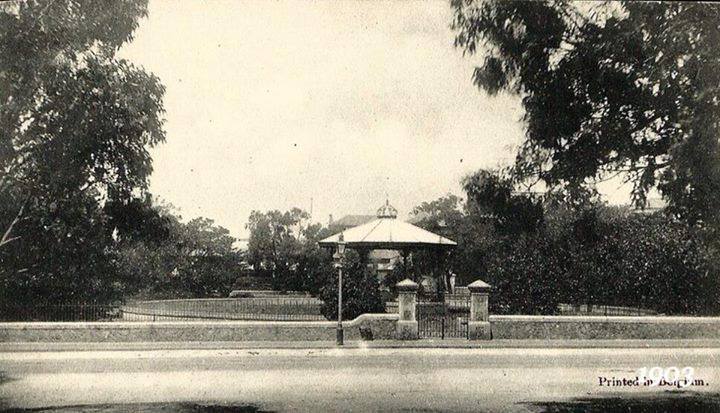 Sometime about 1885, a one-horse-drawn tramline was laid down from Market Square to about the Railway Hotel. Later when electric trams were proposed, there was immense opposition from interested parties. [This was also the case] when electric light was to be introduced in place of the old gas lamps, and when the water service was to be extended by building the Bulk and Sand River dams.