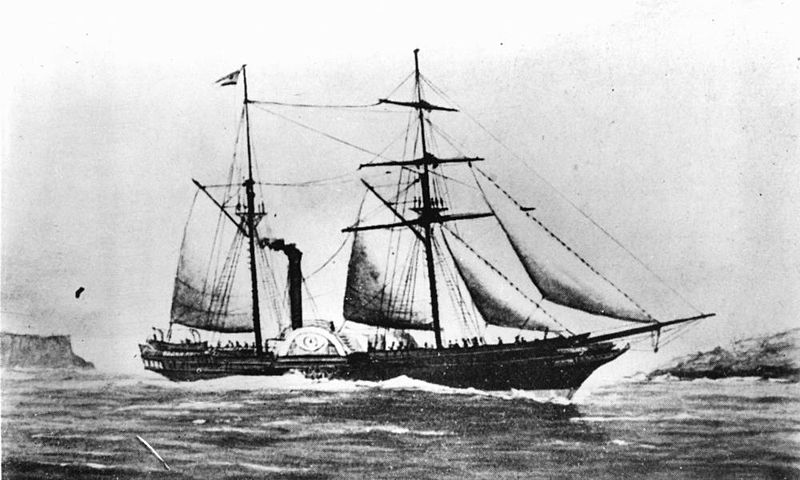 “In 1652, the Colony of the Cape of Good Hope was established by old Surgeon Van Riebeeck, who had for some years recommended it as a valuable Settlement to the Dutch Government; and Algoa Bay (the Bahia de Lagoa, distinguished by the Portuguese navigator from the Rio de la Goa, or Delagoa Bay) appears to have been first visited by the Dutch in 1660.”

“In 1772, the Dutch East India Company set up several beacons or possessional landmarks along the coast; one at the Zwartkops River, and the other on a sandhill at the Shark’s River, to the southward of the anchorage, from where it is has long gone. It was a small obelisk, of Robben Island blue slate, on which the Company’s cypher was engraved.”

“The acquisition of such a valuable means of commercial intercourse was, of course, not appreciated at the time of its discovery. It was through a mere accident that the importance became apparent; and that was the chance visit of an Englishman, whose countrymen were destined, within a few years afterwards, to occupy, in full sovereignty, this vanguard of the Dutch possession of her Indian Empire.” 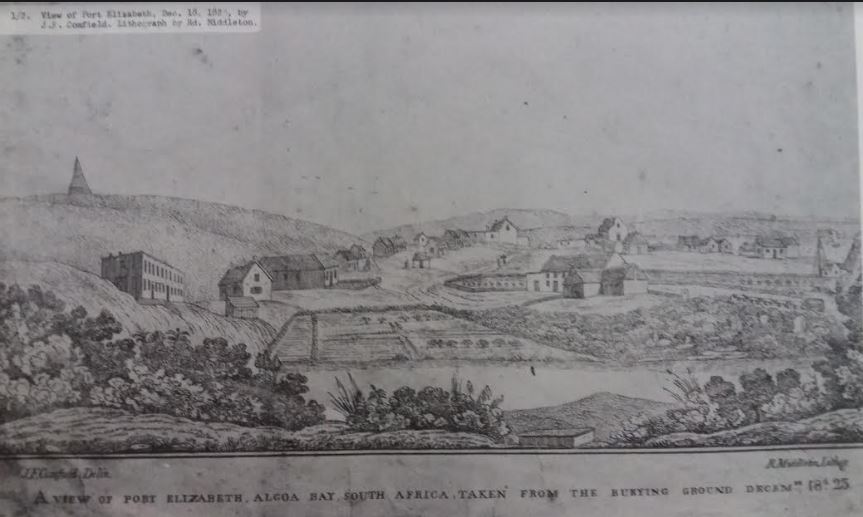 “On the 2nd of May, 1785, an event occurred which drew the particular attention of the Cape Government to Algoa Bay. The English East India Company’s ship Pigot put in there, and, with the permission of the country authorities, landed upwards of one hundred scorbutic [affected with scurvy] patients, who were lodged at the farm of F. Potgieter, now Michael Muller’s, or, as the estate is called, Welbedagt). The notification of this event did not reach the then nearest government authority at Swellendam, until the 10th of July – a distance of 350 miles – so slow was communication in those days. Colonel Dalrymple, a passenger in the vessel, hired a wagon from that place, and to the astonishment of the somnolent heads of office in Cape Town, appeared there, and seems to have awakened them from a quiet, and perhaps, pleasant slumber.”

“Visited from such an unexpected quarter by a British Officer, who had the reputation of being a skilful engineer and surveyor, the Dutch Government took alarm, and the immediate consequence was the formation of a new district – Swellendam and Stellenbosch – districts which had hitherto gloried in boundaries in some terra incognito to the east, were shorn of those unknown regions, and the site of a new magistracy, at Graaff Reinet, was fixed, including the Bay; the object being, as then stated, “to prevent any Foreign Power from settling at the Baya Delagoa.” 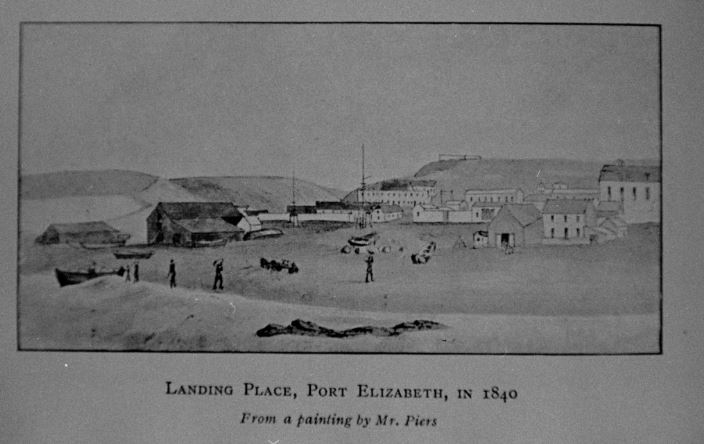 “In 1797, the state of the Kaffir boundary led Lord McCartney to contemplate removing the seat of [the] magistracy from Graaff-Reinet to Zwartkop’s River, but the design was abandoned until the year 1804, when the town Uitenhage was founded on the banks of that stream.”

“In 1799, the site of the present town of Port Elizabeth was occupied by British troops in consequence of the disturbances on the Frontier. Fort Frederick, a small work of stone masonry, still existing, was built at this time, but with the Peace of Amiens, along with the rest of the colonial dependencies, all of which was restored to the British after the second capture of the colony in 1806.”

“The year 1820 witnessed the arrival of the immigrant British Settlers – when 2,020 men, 607 women and 2,032 children were safely landed, owing to the security of the bay, and the kind vigilance of Capt. Evatt, the hospitable and attentive Commandant of the Fort. The first party of these settlers arrived in the bay on the 10th April – a day much remembered in the annals of the Cape Colony. In the same year, the Acting Governor of the Colony, Sir Rufane Shaw Donkin visited the bay in order to welcome the settlers and to see them on their way by wagon to the land allocated to them. At this time he ordered the erection of a small pyramidal monument, in memory of his late deceased lady, on the height above the rising village, to which he gave her name, ELIZABETH.”

“At that time, the only buildings were the fort just alluded to, a small barrack, a mess-house, the Commandant’s quarters, a few temporary huts – all of perishable materials – besides the original farm house belonging to a Boer by the name of Hartman. The population was about 35 souls, and its trade confined to the occasional visit of a coasting vessel – with long lapses between each voyage – bringing in exchange for butter, a few articles of clothing, and supplies for the military.”

“The progressive state of the Trade of this Port is as follows: 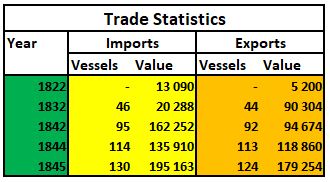 By 1848 the population has increased to 3383 souls, two-thirds of whom are English. The number of houses inhabited by one or more persons is 416. Huts or other dwellings without walls, 278, and the value of fixed property as assessed for road rates is £125,789.”

“A splendid pile of buildings has been completed for the use of the Commissariat, and a place d’armes, at a cost of about £14,000. There is a church of the Episcopal congregation, called St. Mary, a Wesleyan and [an] Independent chapel, besides a place of worship for the Roman Catholics. There is also a small court house, with public offices attached, a gaol, and a very neat and ornamental structure, intended for an Exchange.”

“A fine steamer, the Phoenix, regularly plies between Table Bay and Port Elizabeth, the passage occupying each way, the average period, of from three to four days.”

“There is no correct chart of Algoa Bay published at present. Lieutenant Rice’s sketch, made in 1797, to be found in Barrow’s Travels, and reprinted by the Hydrological office, in 1801, is the only one extant, and used by navigators; and there is only one danger in entering the anchorage – the Roman Rock as it is denominated – the imperfect chart has perhaps been thought sufficient for the common purposes of navigation, but the rapidly-increasing commerce of the Port, imperatively calls for a fresh and more accurate survey.” 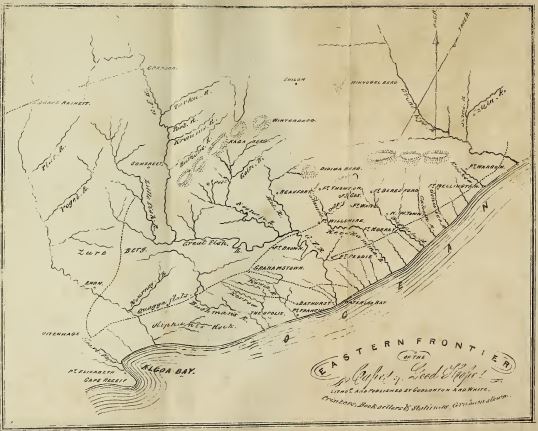 Map of Eastern Province in 1848

“Rice’s chart represents the Bay as open to nearly half the compass – whereas it is now well known, beyond all possibility of dispute, that from the anchorage, the extremes of the land (that is, horns of the bay), extended only six points – which is from east-half-south to south-and-by-east-half-east, and it is only when the wind blows within these points, that ships can be placed in danger at the anchorage. For the observation of these bearings, we are indebted to Sir John Marshall, commanding H.M frigate Isis, on his visit here in July, 1843 – when they were taken by his orders with an improved azimuth compass. Taking a fair average of the year, it may safely be said that the wind blows four days from the land to one day upon it.”

“A reference to the chart in question, as well as to the various maps of the south-east-south coast of the Colony (copied from Lieutenant Rice’s sketches) will show that Algoa Bay is there represented as little better than a mere open roadstead, whereas it is, in fact, a deep, horseshoe-shaped indentation, well protected from the violence of the wind – except under peculiar visitations, occurring at long intervals apart.” 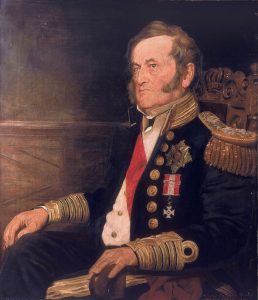 “A slight survey – perhaps it should rather be called an inspection of the bay – was made in 1820, by Captain Fairfax Moresby, of the Menai, and, in his report states: ‘Should Port Elizabeth ever become a place of commerce consequence (which there is no doubt it soon will), chain-moorings, or even anchors of a larger size, with chain cable, should be laid down for those ships that wish to approach near the shore, for the purpose of loading and unloading.'”

“’I do not,’ adds he, ‘make the remark from the insecurity of the bay – for I consider it, at all times equal to Table Bay, and for six months, very far its superior.’ And the gallant Commander goes on to say, ‘Had I my choice of trusting my ship for the year round to Torbay, in England – Palmero Bay in Sicily – or Algoa Bay, I should, without hesitation, prefer the anchorage of Port Elizabeth.’”

“To make this bay – what it deserves to be, and must sooner or later become – a place of extensive commerce, there are four improvements yet to be introduced, viz a landing jetty, a supply of water to the beach, a buoy on the Roman or Despatch Rock and a lighthouse on Cape Receife. It is satisfactory to state that arrangements have been made for the commencement of the latter immediately.”

The Eastern Province Directory and Almanac for 1848 (1848, Godlonton & White, Grahamstown)

Port Elizabeth of Yore: The Untimely Demise of the First Jetty