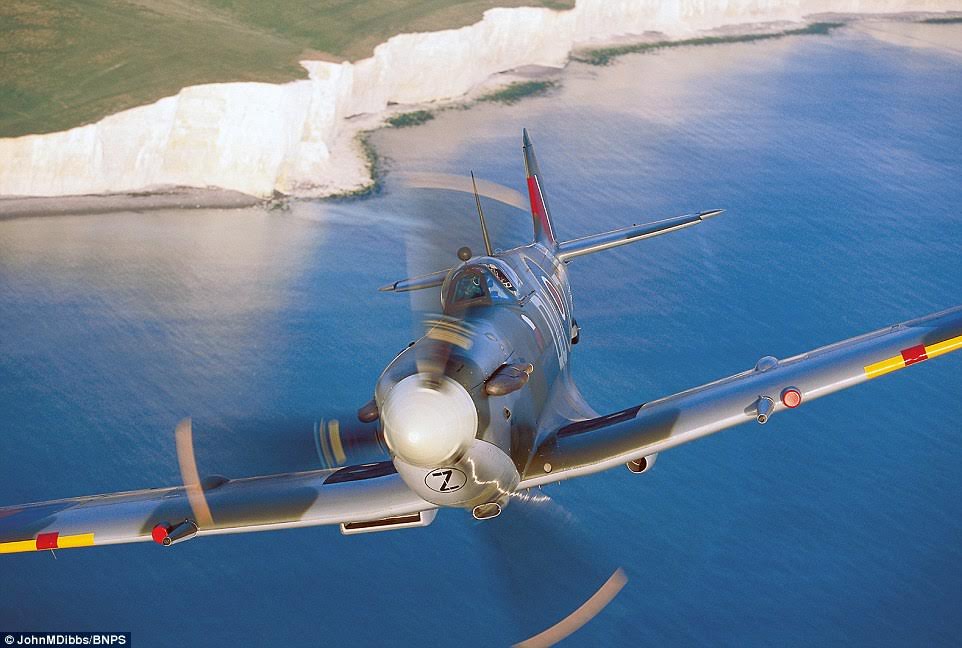 This sonnet by John Magee, written in September 1941, about his experience in flying a Spitfire will forever epitomise for me the elegant and sleek lines of that iconic plane.  At 80 years old on 5th March 2016, it has certainly aged gracefully. Of the 20,351 built only 55 are still flying today. To celebrate its diamond anniversary milestone, aerial photographer John Dibbs and wordsmith Tony Holmes have created an epic & fitting tribute to the Supermarine Spitfire.

These legends of WW2 and the Battle of Britain in particular are captured by John Didds in pin-sharp pictures using only a hand-held camera. John Dibbs took years of being flown to within 15 feet of these planes to capture the stunning pictures below.

This is tribute both to the enduring beauty of the plane and to the skill and experience of John Dibbs.

Main picture: AR614 tears through the sky over the white cliffs of Dover

The book, “Spitfire – The Legend Lives On” traces the history of the various Marks in a series of chapters that include the Mark V, the Mark VIIIs, an individual IXB, the PR (Photo Reconnaissance series), the Packard Merlin and Griffon Spitfires, the Seafires and ‘Spitfire Spectacular,’ a paen of praise for a great collection of historical airframes flying today. The individual aircraft shown are remarkable in that material is included about many of the pilots who flew them in battle, including their head shots, and restoration data makes one realize what a great achievement it is to bring an aircraft ‘back from the dead’ after years or decades of being lost. 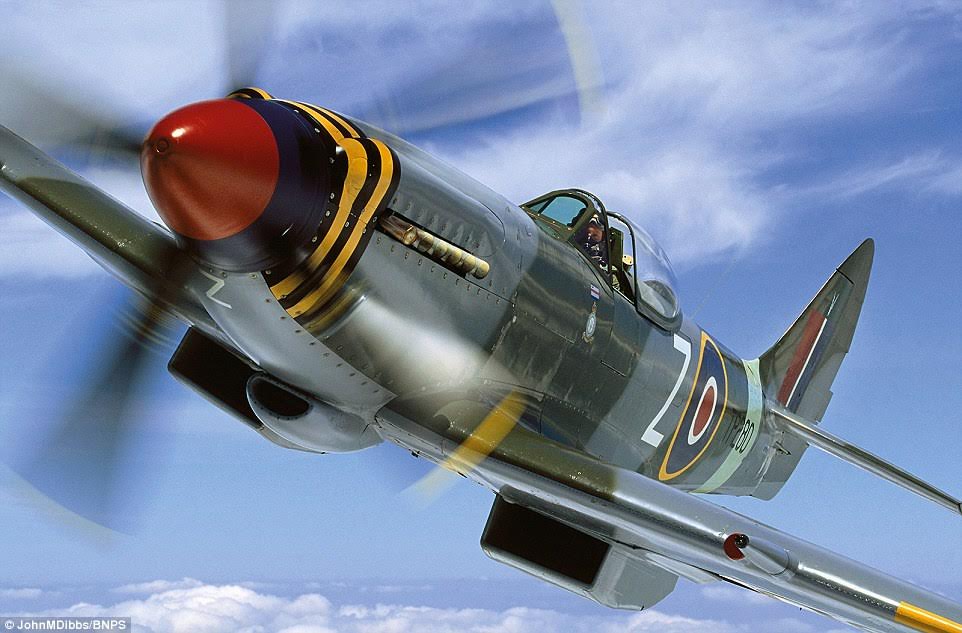 Amazingly all of these photos are untouched non-photoshopped images

RJ Mitchell, the chief designer at the Supermarine Aviation Works, was instrumental in the adoption of the distinctive elliptical wing. This was a prerequisite for a short range, high performance high performance interceptor. This wing design enabled the Spitfire to have a higher top speed than several contemporary fighters such as the Hawker Hurricane. 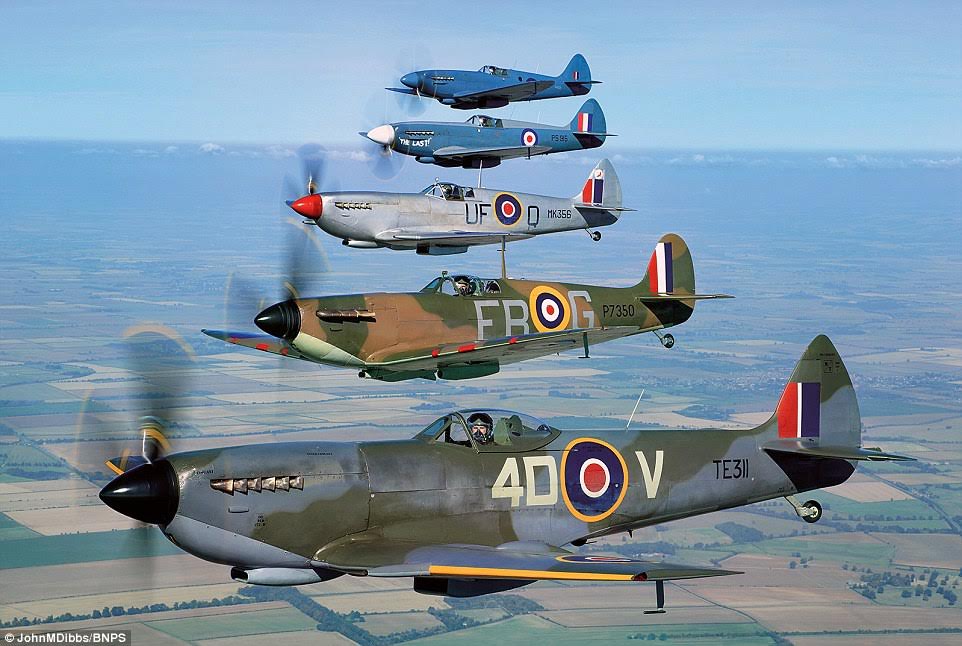 Mitchell had the pleasure of observing the maiden flight of the prototype K5054 in March 1936. Sadly he was to pass away in 1937, never to witness its baptism of fire in the Battle of Britain which it survived with flying colours. In spite of the popular myth that the Spitfire won the Battle of Britain for Britain, it was in fact the dour but reliable Hurricane. The sleek lines & throaty roar of the Rolls Royce Merlin engines had won the hearts of the British public. 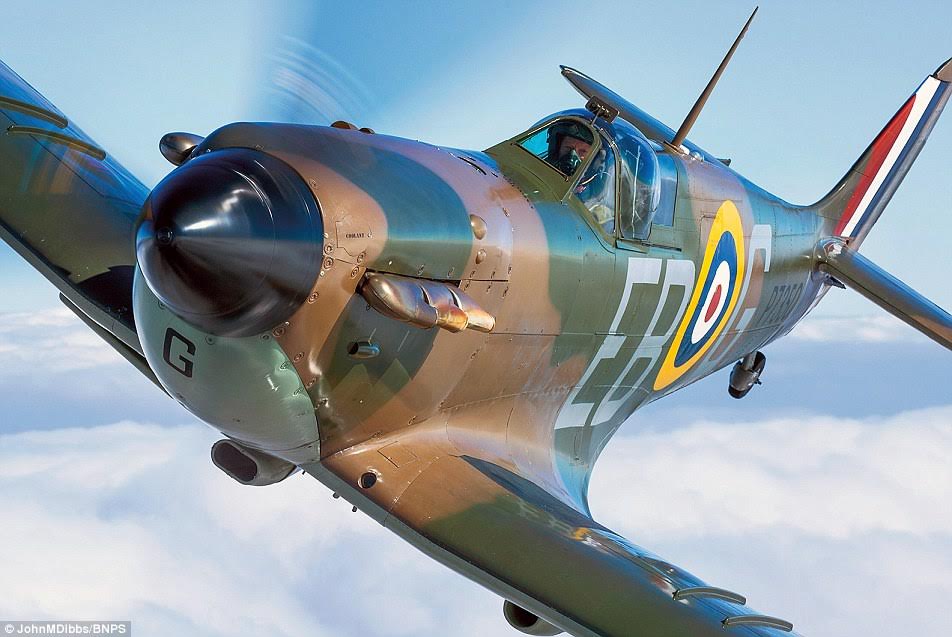 All of the rest of the commentary are by Euan McLelland of the Daily Mail except for the sonnet at the end.

The oldest airworthy Spitfire in the world and the only one still flying to have actually fought in the Battle of Britain, Spitfire P7350 was first flown into action by 21-year-old Polish Pilot Officer Ludwik Martel.

He was a former cadet officer in the Polish Air Force who arrived in England in early 1940 following the Nazi invasion of his home country the year before.

Martel made his first ‘kill’ in another Spitfire, while on patrol with 603 Squadron when he shot down a German Messerschmitt 109 over the Channel about six miles east of Dover.

The aircraft was hit by cannon fire in the left wing and Martel was wounded by shrapnel in the left side of his body and legs.

But he still managed to bring the aircraft back down through cloud and then – in pain and fighting to stay conscious – he landed it in a field near Hastings.

The Spitfire was sold for scrap in 1948 for £25 – but luckily its historical significance was recognised.

It was later donated to the RAF Museum at Colerne near Bristol –  before being restored to take part in the 1969 epic war film Battle of Britain. 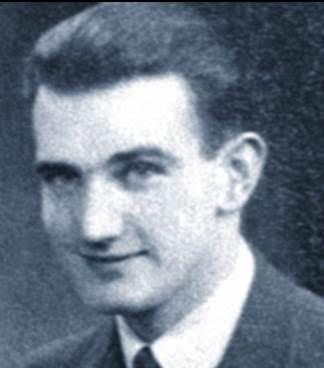 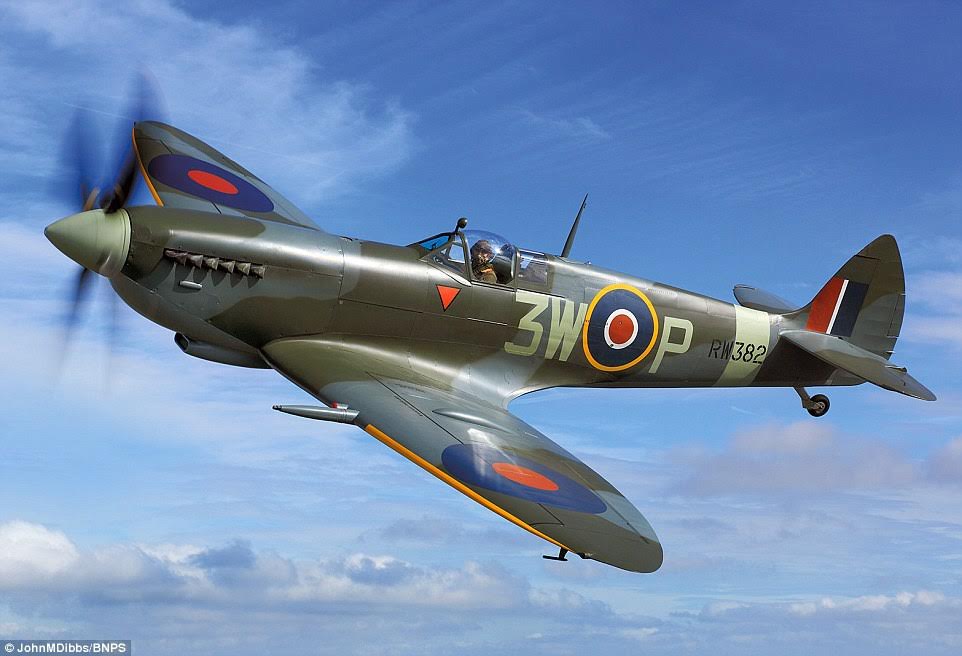 Speed: The pilot of Mk XVl Spitfire RW382 – powered by a Packhard Merlin engine – glances towards Dibbs as he races across the sky

Reaching heights of up to 9,000 ft and speeds of 250 mph, Dibbs had to contend with extreme wind and noise to shoot through an open canopy with a handheld camera. His glorious photographs grace the pages of a book marking the 80th anniversary of the Spitfire’s maiden flight.

The aircraft he photographed include a Mk I Spitfire N3200 that was shot down over the beaches of Dunkirk in 1940, and lay buried for more than 40 years until it was revealed by a huge storm. Incredibly, it was recovered and restored to airworthy condition.

Similarly, Mk I X4650 crashed into a riverbank in Cleveland following a mid-air collision in 1940, and remained hidden until the drought of 1976 uncovered the wreckage. It was painstakingly reconstructed and flew for the first time in 2011.

Mk IX MH434 which was built in 1943, piloted by South African flying ace Sailor Malan, and has never been subject to a rebuild – also features.

Dibbs, 50, has gone on more than 1,100 photographic sorties over the past 20 years. But most of the incredibly-detailed snaps of the last Spitfires were shot in the last seven years over southern England.

This Spitfire had seven confirmed ‘kills’ – six of them with Squadron Leader Geoffrey Northcott at the controls – after it was delivered to the RAF in June 1942.

But a ground collision cut short the aircraft’s successful career.

After the war, she was used to train service personnel on the ground, then served as gate guard at a number of RAF stations until 1967, when she was used as a static aircraft in Guy Hamilton’s Battle of Britain movie. After her first silver-screen experience she was back guarding the gate at RAF Wattisham until 1989 when she was transported to RAF St. Athan, where she remained in storage until 1993.

Following a full restoration, EP120 returned to the skies in September 1995 and has been a popular performer with the crowds at air shows and pilots ever since. 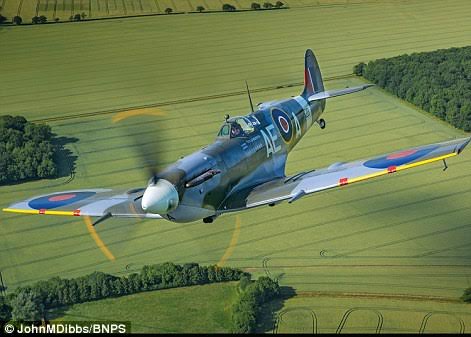 Mk Vb Spitfire EP120 powered by a Rolls Royce Merlin. The plane was taken on by the RAF in May 1942 and assigned to 501 squadron 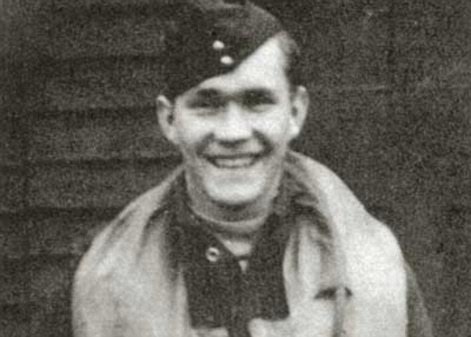 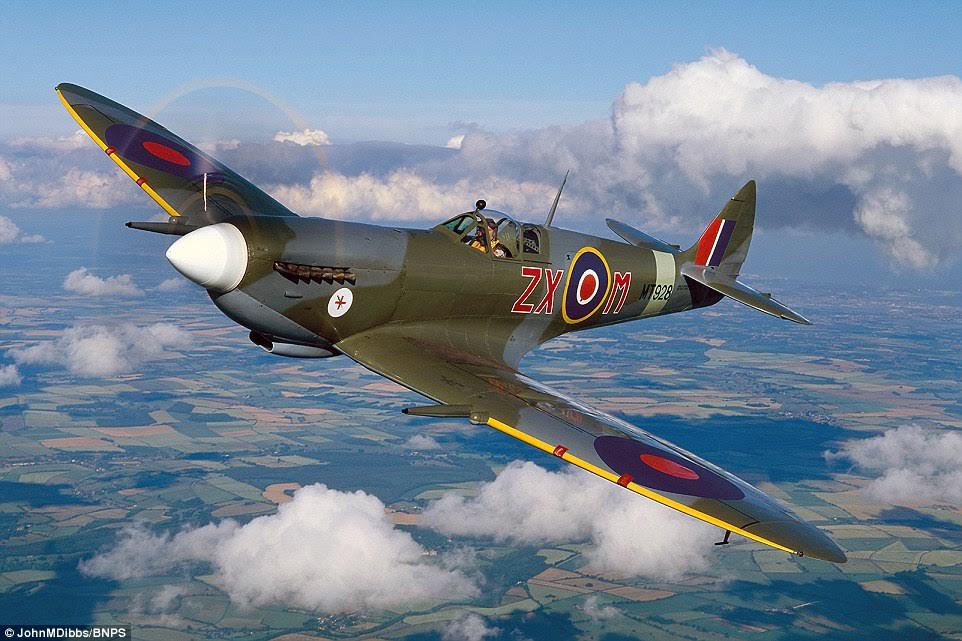 Camouflaged: Spitfire MT928 was built as MV154 at Southampton in 1944. She was delivered to 6 MU (Maintenance Unit) on September 15, 1944 from where she started a long trip by boat to Sydney, Australia where she arrived on November 24 the same year 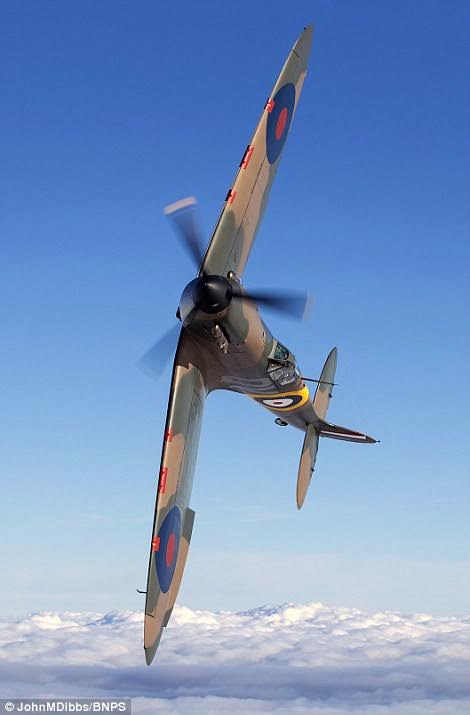 Spitfire N3200, the oldest Spitfire still flying, was fully restored after being shot down over Dunkirk in May 1940 and reappearing from the sands in 1986. 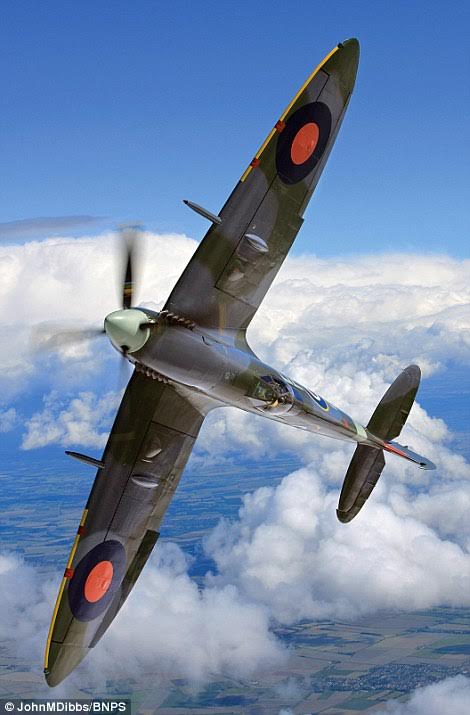 Look to the skies: A stunning image shows a ‘squadron’ of seven Spitfire’s and two Hurricanes flying above the clouds over Britain 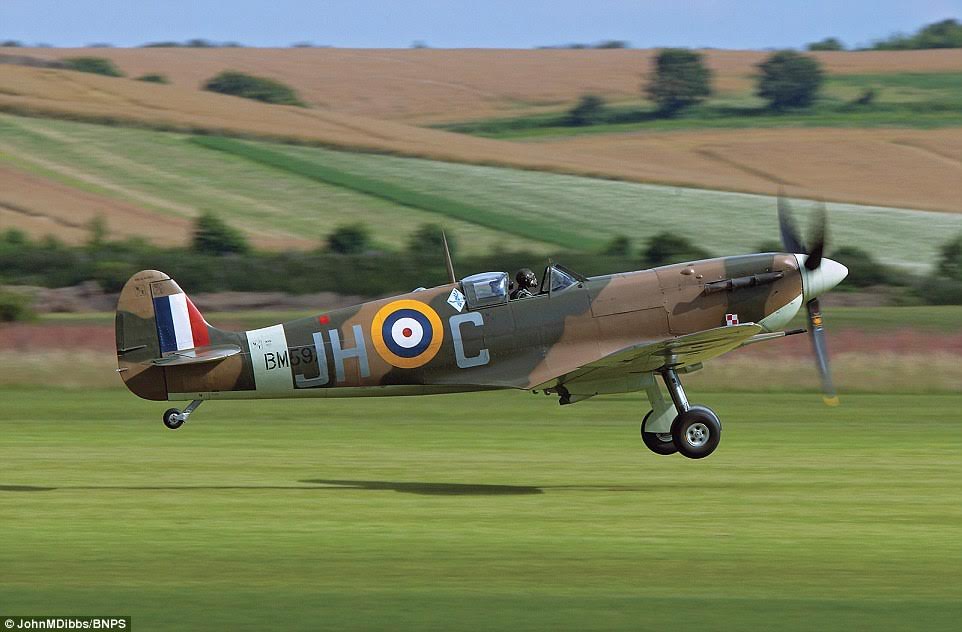 While the majority of the Spitfires fought the Luftwaffe in World War Two one of them is the last to ‘fire its guns in anger on King’s business’ in the Malayan Emergency in the 1950s.

While commanding a squadron covering the Dunkirk evacuation, Squadron Leader Geoffrey Stephenson was shot down in Spitfire F IA N3200 on May 26, 1940. He was taken prisoner, spending more than five years in captivity.

He managed to land the aircraft on a beach at Sangatte, near Calais, then walked about 100 miles through enemy territory, evading capture, before ending up in Brussels, where he went to the U.S. embassy – which refused to take him in, as the country was not yet involved in the war. 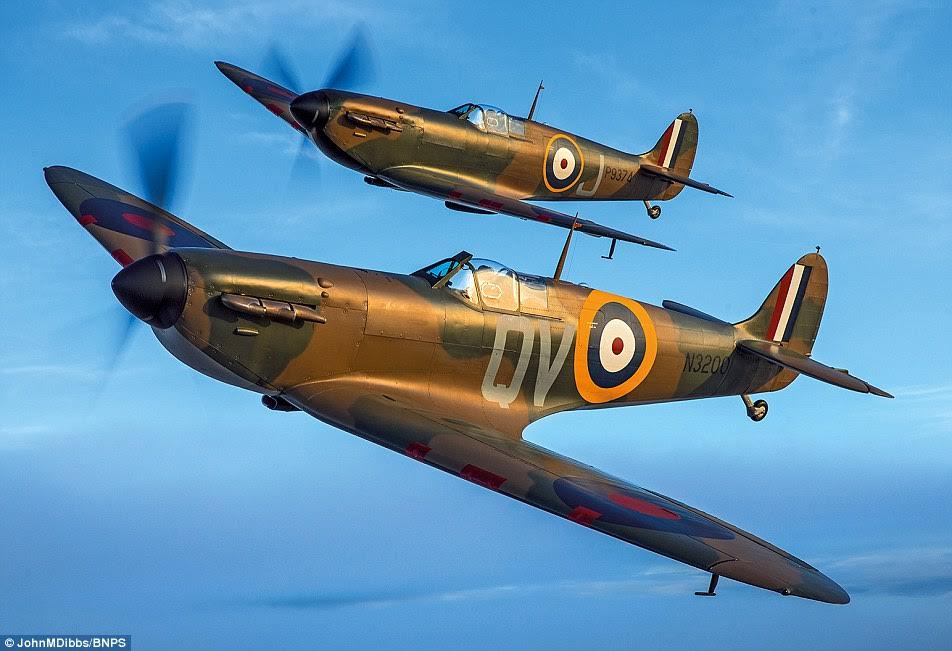 Shine: Spitfire N3200 the oldest Spitfire still flying and now fully restored after being shot down over Dunkirk in May 1940 before it was found in 1986 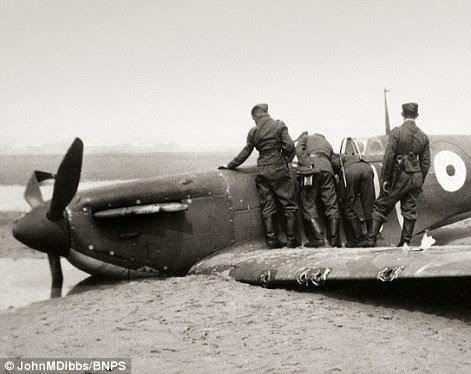 The plane lay buried under tidal sands on a beach at Sangatte, near Calais, until it was rediscovered and salvaged 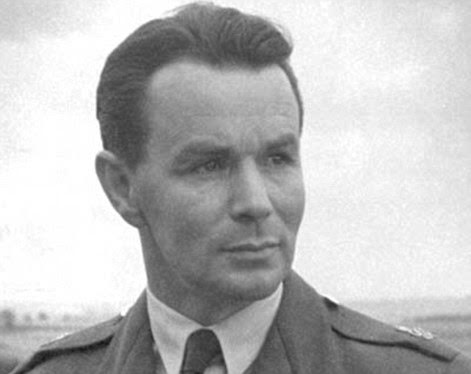 Squadron Leader Geoffrey Stephenson then surrendered and became a prisoner of war. After multiple escape attempts from other PoW camps, he was sent to the infamous Colditz Castle. Following the war, Stephenson served as the personal pilot for King George VI.

He was killed in Florida in 1954, aged of 44, in an accident while test flying a plane as part of an exchange tour with the U.S. Air Force. Spitfire N3200 remained on the beach and soon sank into the tidal sand.

It was forgotten about until unusually strong currents revealed its remains. It was rediscovered and salvaged from the beach in 1986. It was restored to flight in 2014 – with the markings worn when it was downed.

‘One of the most exhilarating things is about how close you get,’ he says.

‘Sat atop the English countryside with a MkI or Mk V off your wing is not something you just witness, you feel it.

‘It is an extreme working environment. I always shoot Spitfires through clean air and when the canopy is open it gets a bit chilly up there.

‘I have to overcome the wind and slipstream, which are incredibly strong, as well as the noise and speed. But I’ve been doing it long enough not to get freaked out or airsick.’

He added: ‘I am thrilled with the book. I am an air to air photographer so I fly in one like-for-like plane to shoot another.

‘A lot of people think the pictures are fake because they are so close up but it is due to Tim’s skill as a pilot to get the plane exactly where I want it to be that enables me to get these pictures.

‘This book is to honour the veterans who flew them and there is no finer compliment than to have one tell me I have captured the spirit of the Spitfire in my photographs.’ 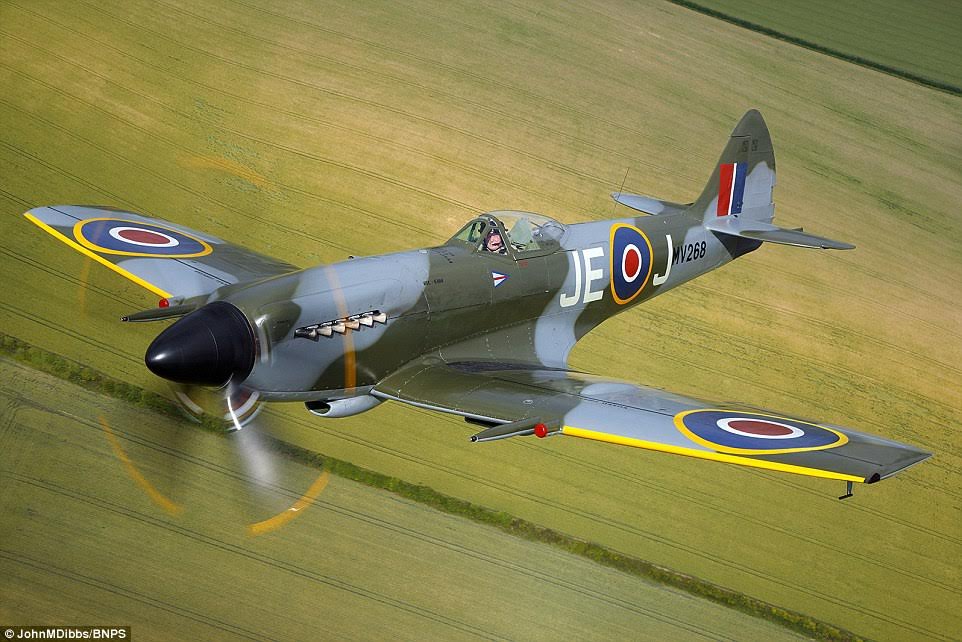 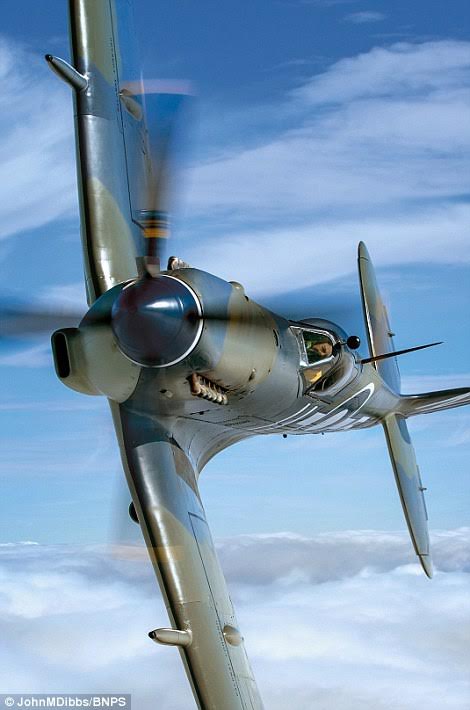 Fierce – Mk 3 Seafire PP972, the Royal Navy version of the Spitfire built for aircraft carriers and powered by a Rolls-Royce Merlin engine. 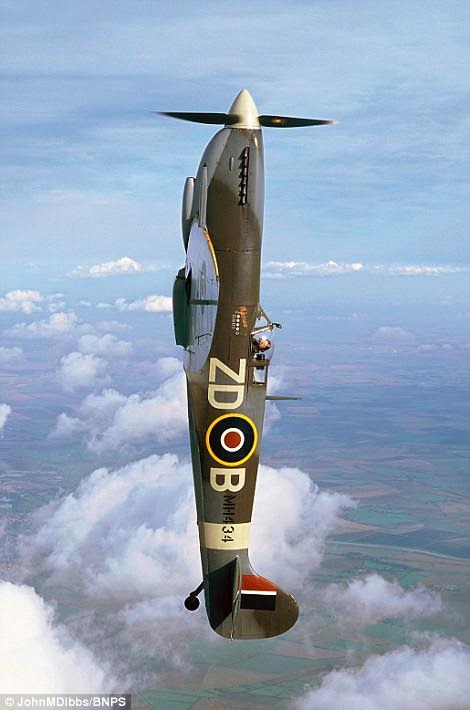 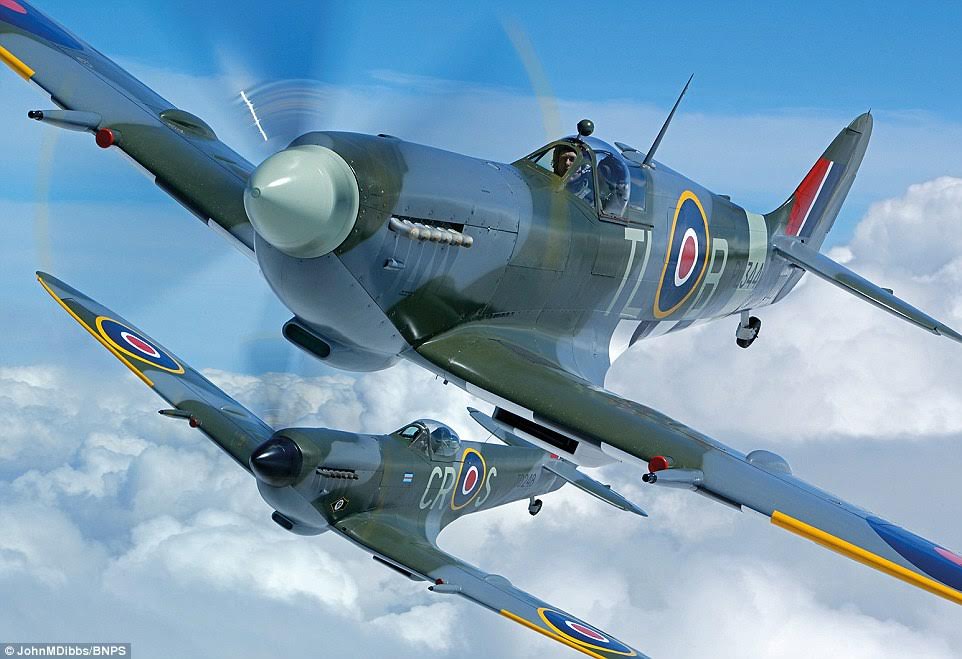 Mr Dibbs, originally from north London but now living in Seattle, WA, said his aim was to capture Spitfires that have a combat history 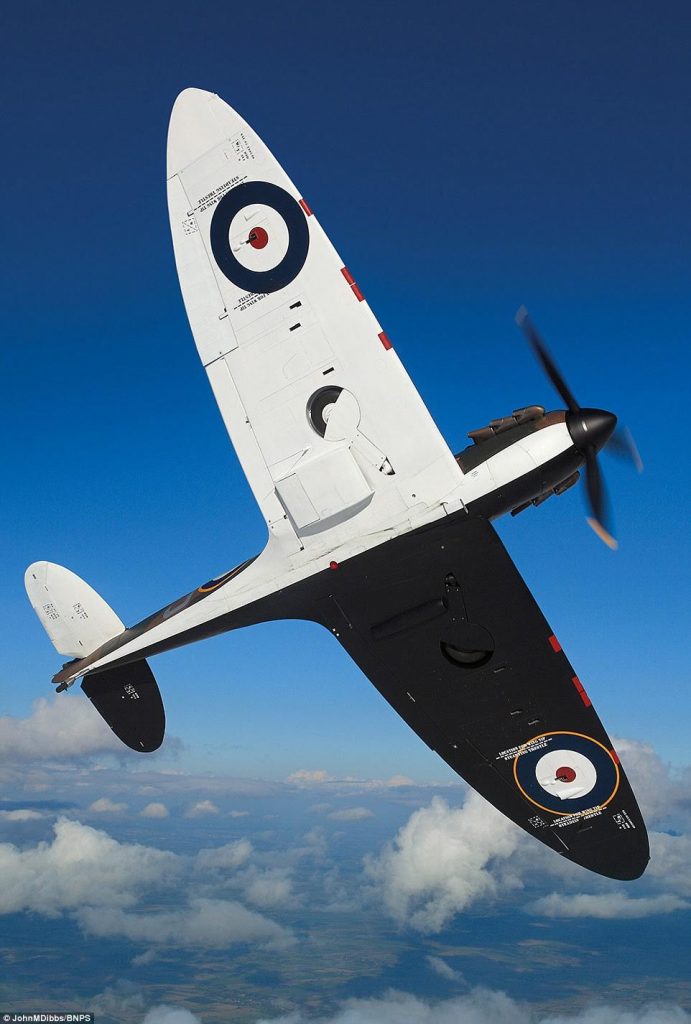 Commander: Mr Dibbs, who has snapped Concorde, the Red Arrows and F16 planes before, praised the skill of the Spitfire pilots to fly in formation 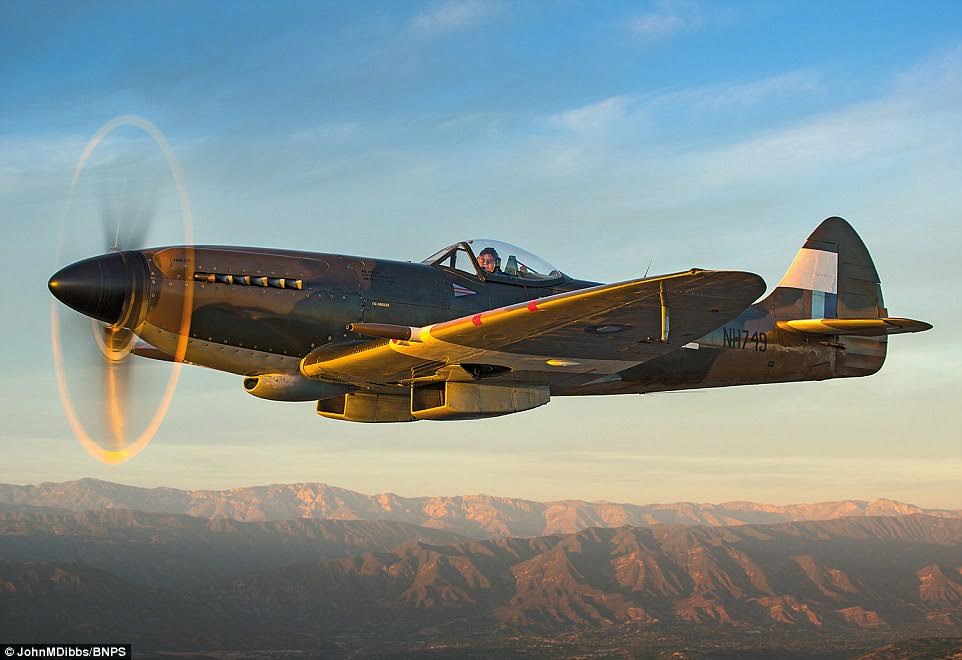 Adventure: Spitfire NH749 in an Indian colour scheme was built at Supermarine in Aldermaston and powered by a Rolls-Royce Griffon engine 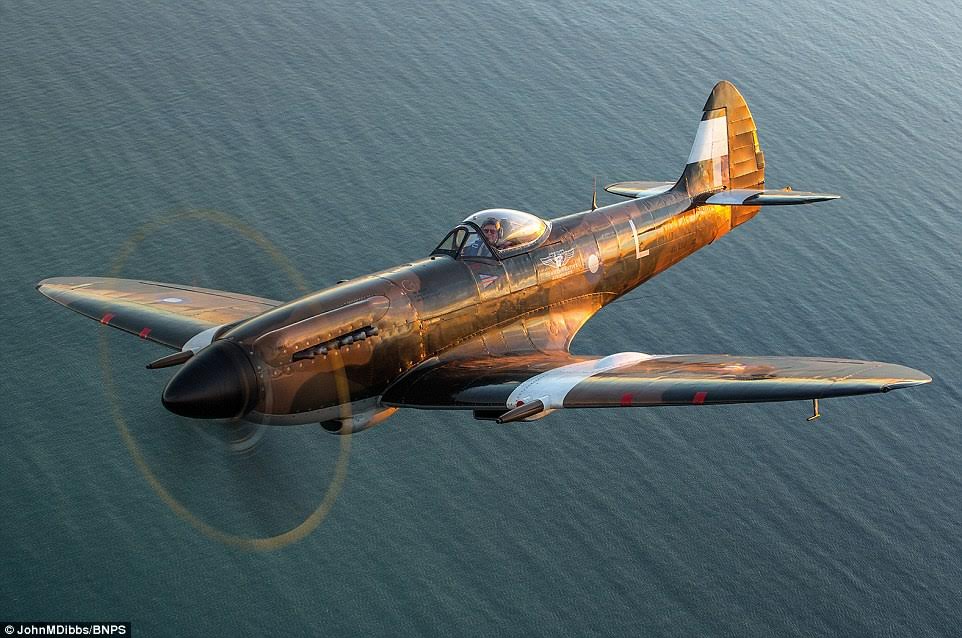 Fly past: The stunning war plane is seen gliding over water as the sun glistens off its body, colouring it a bronze-gold shade 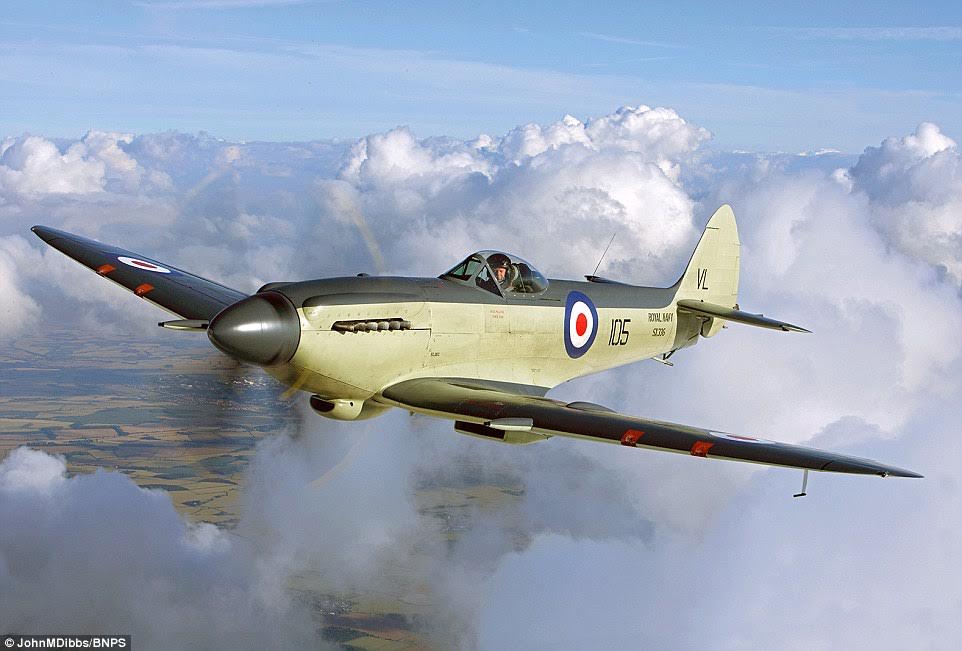 Propeller: Mr Dibbs said of his images: ‘A lot of people think the pictures are fake because they are so close up but it is due to Tim’s skill as a pilot to get the plane exactly where I want it to be that enables me to get these pictures’ 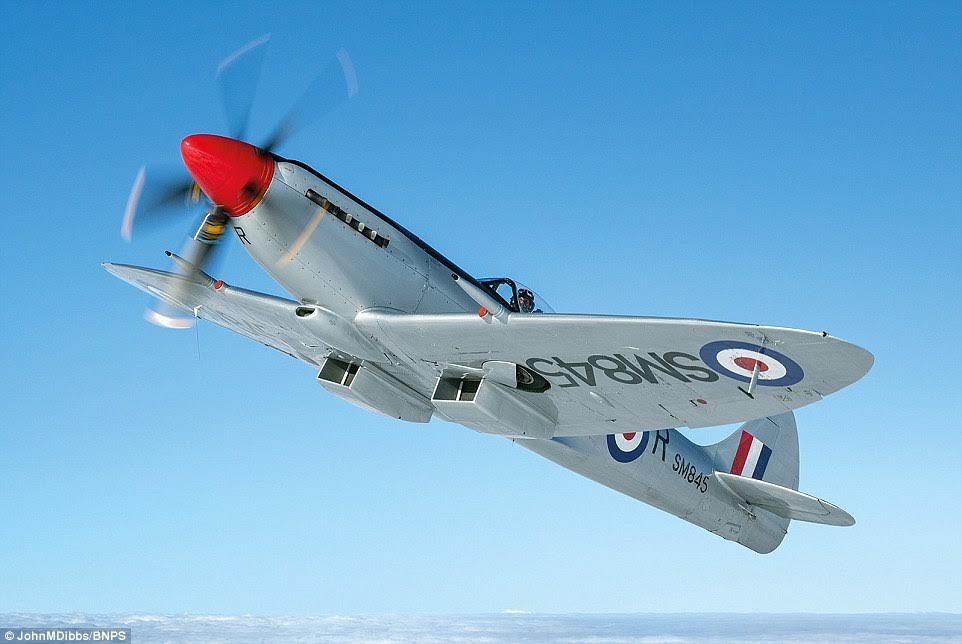 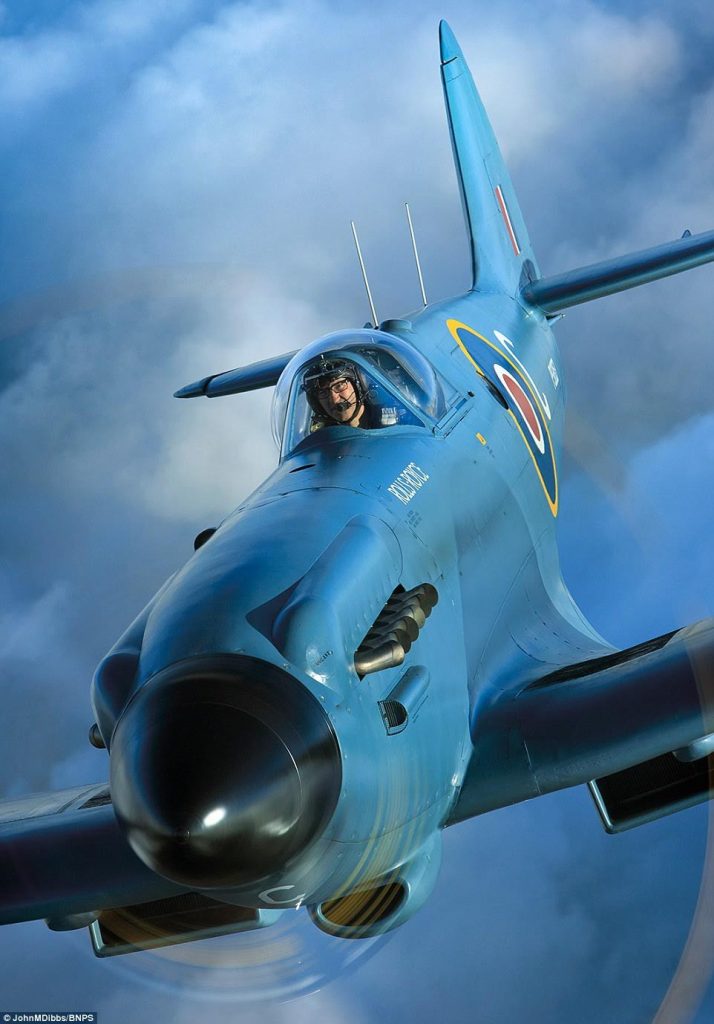 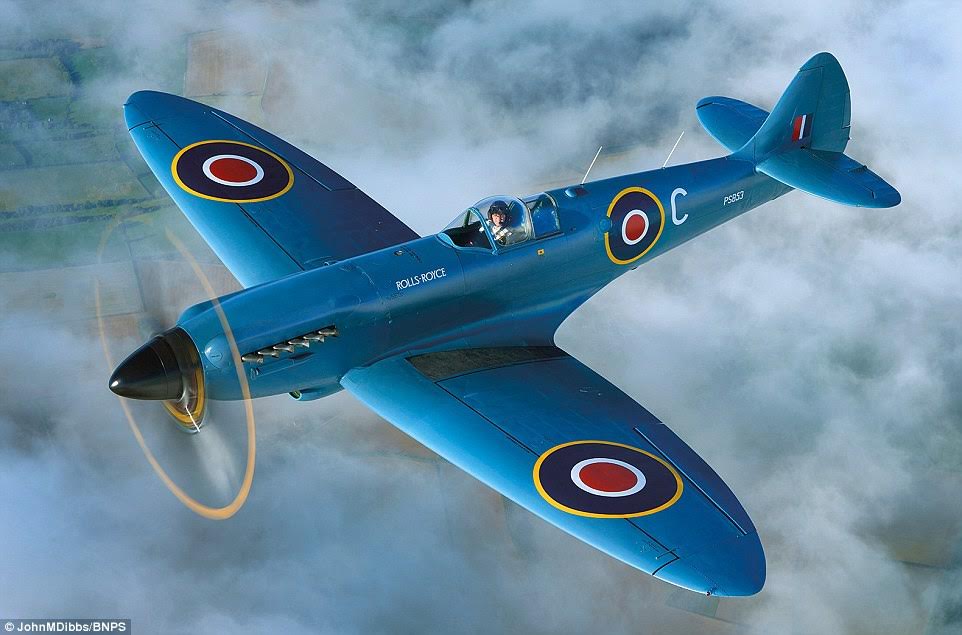 Monumental: The blue coloured Spitfire is powered by a Rolls-Royce Griffon engine and has a top speed of 446 mph and a ceiling of 42,000 ft 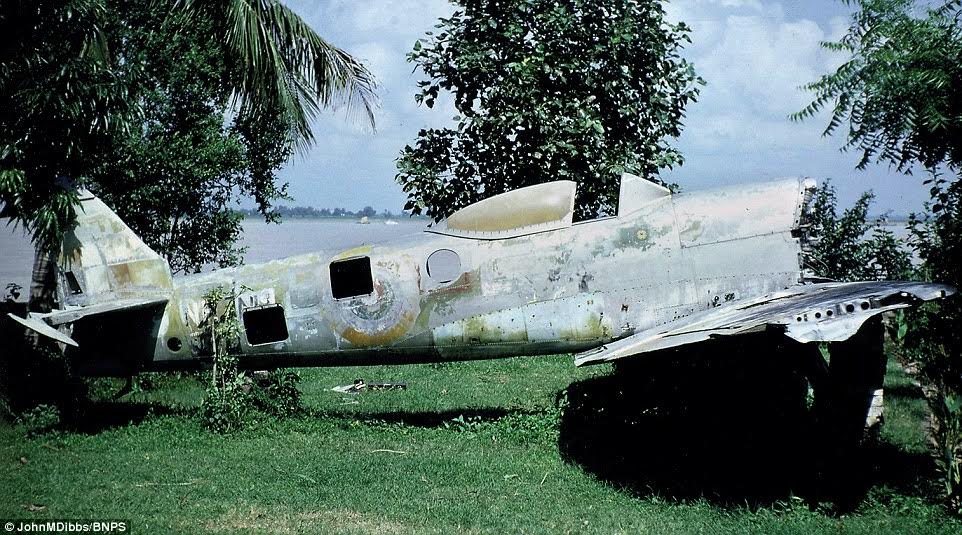 Shell: A photograph of Spitfire NH749 when it was rediscovered in Patna in 1977. It has now been fully restored and flies once more

Oh! I have slipped the surly bonds of earth,
And danced the skies on laughter-silvered wings;
Sunward I’ve climbed, and joined the tumbling mirth
Of sun-split clouds, –and done a hundred things
You have not dreamed of –Wheeled and soared and swung
High in the sunlit silence. Hov’ring there
I’ve chased the shouting wind along, and flung
My eager craft through footless halls of air…
Up, up the long, delirious, burning blue
I’ve topped the wind-swept heights with easy grace
Where never lark or even eagle flew —
And, while with silent lifting mind I’ve trod
The high untrespassed sanctity of space,
Put out my hand, and touched the face of God.

John Magee was to die in an air crash 3 months after writing this poem. On 11th December 1941 while on a routine training exercise, he was killed.

Book: “Spitfire – The Legend Lives On” by John Dibbs and Tony Holmes 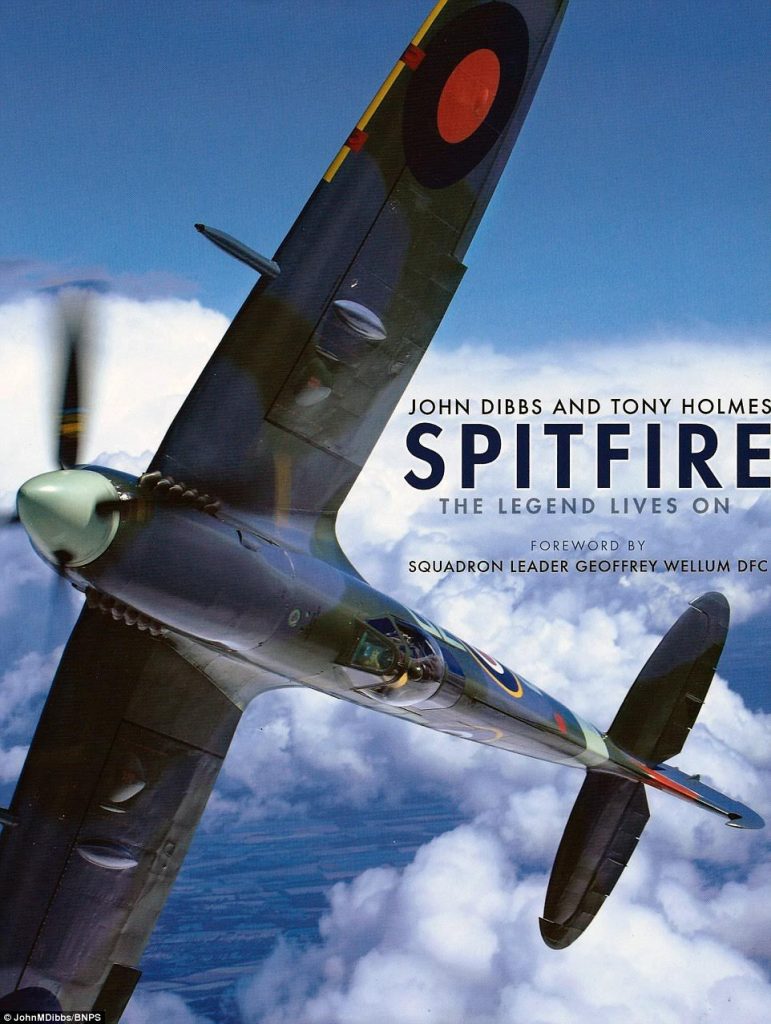