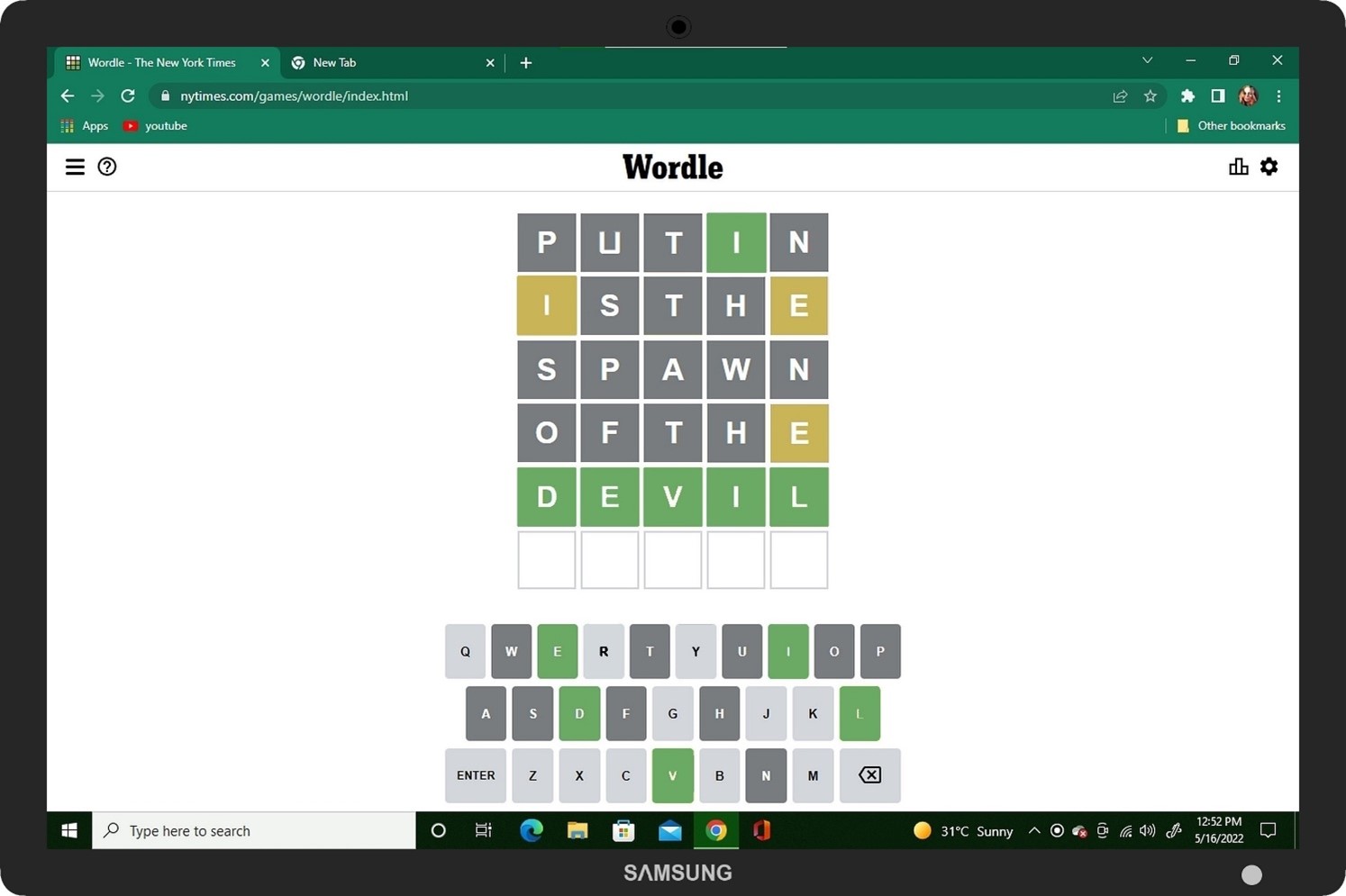 Who would have thunk that a silly but harmless little computer game would cause a rift between the two greatest English-speaking nations.  I refer of course to Wordle.  The outbreak of linguistic war between the Old and the New Worlds has its genesis in the fact that the game’s developer, Josh Wardle (believe it or not) is a Welshman who sold his Celtic soul when the New York Times bought his program.

First, the normally phlegmatic Brits provoked a trans-Atlantic twar when they complained bitterly about the American spelling of the word HUMOR on the 9th of February. Little did they know that the word, humor, was used extensively in Old English.  In the Middle Ages, they believed that a person’s health and disposition were the result of a balance of four fluids in the body – blood, phlegm, yellow bile, and black bile.  These fluids were called humors and there was nothing funny about them.

On the 24th of February the New York Times evened things up with the wordle of the day being BLOKE.  This time it was the turn of the Americans to spew bile, both the yellow and the black varieties and probably indulge in a bit of bloodletting too.  To them, a bloke is just a guy but that does not signify to the Brits as they killed that Guy off with extreme prejudice on 5 November 1606.  A few days later Wordle had the poor Americans up in alms again with the word RUPEE.  “It’s not even an English word,” was one of the more benign tweets.

South Africans have grown up in the middle and are confused, particularly my generation who were brought up speaking and spelling British Standard English but are now force fed a diet of simplistic American English without the mystique and eccentricity of British spelling – what’s the difference between practice and practise or does the word end in -ise or -ize.  But we are lucky now with Wordle as we slide seamlessly between the two English languages and can solve AITSA as well.

Wordle has about 10,000 words that are valid entries to stop people randomly going through the alphabet.  It also has a predetermined list of about 2300 answers which will take us deep into 2027.  What are we addicts going to do then, huh – take up knitting when our bladder wakes us up in the wee hours and there’s no the new wordle of the day?  Since the takeover by the New York Times, they have removed at least 19 words from the possible inputs and 6 from the answers.  The reasons cited have been: offensive words straight out of Trump’s and rappers’ lexicons like PUSSY, WHORE, BITCH, etc.; triggering words such as LYNCH; obscure ones like PUPAL; confusing spelling between the Brits and Americans such as FIBRE/FIBER or current news items as in FETUS (which also has the confusing spelling – to Americans that is – of FOETUS).  Interestingly, towards the end of March the woke worthies of the NYT removed HARRY as an answer.  It could have fallen foul of a number of categories: it is offensive or a swearword to a lot of Brits in these post markle times, it is a current news item and, as a verb, it has an obscure meaning to illiterate Americans, or is triggering to some snowflakes.

Take your pick but The War of the Wordles continues unless PUTIN presses a button which will be the end of Wordle and the World as we know it.  As Einstein said, “World War IV will be fought with sticks and stones”

Port Elizabeth of Yore: James Laing’s View of PE in 1831