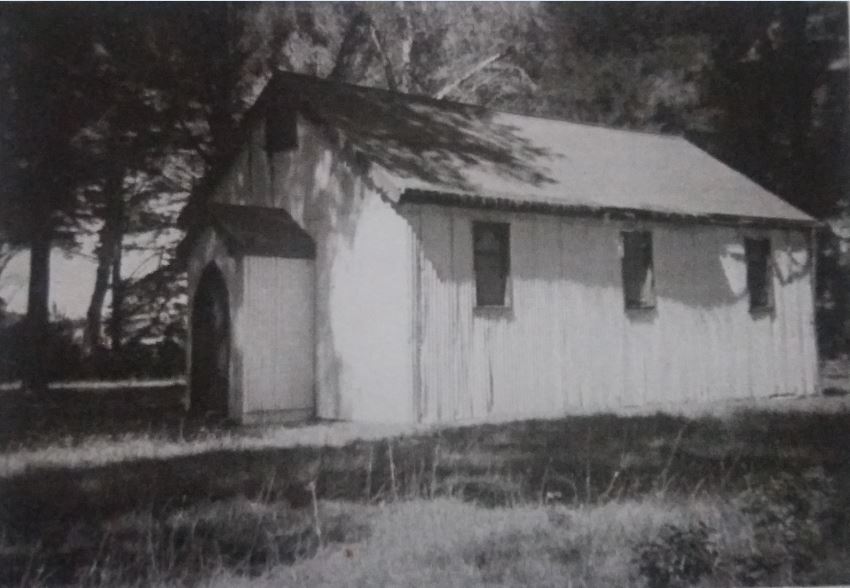 Amongst the few things that I know about my grandmother’s upbringing, is that as a Beckley, she was raised in the family house in Draaifontein. Furthermore, Elizabeth Daisy McCleland always claimed that she was the first person to be betrothed in the St Albans Church.

Only after recently receiving a photograph of the original iron & timber church from Rosemary MacGeoghan and the excellent notes by Anthony Beckley, have I been able to establish something of substance about this quaint church.

This is the story of the family church.

On 15th 1888 when Mr Johnson was tenant farmer on “Draaifontein” a gathering of the local farming community inaugurated the first Anglican service to be held in the area.

This eventful “in house” service, was conducted by Canon Mayo and Dr. Theodore Wirgman from St. Mary’s, Port Elizabeth. They made the two day journey to Draaifontein on horseback. On the way Dr. Wirgman fell off his horse, fortunately sustaining only minor injuries. 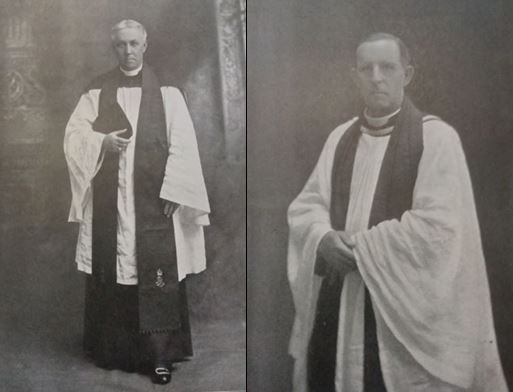 With the considerable expansion of the farming community and its increasing numbers, it soon became essential for the “house church” to find new and larger premises. Joseph James Beckley donated land to the diocese for the building of a church.

Map of the Draaifontein area

The necessary timber and iron for its construction were imported and shipped from England, landed at North End beach by barge where wagon trains waited on shore ready to load and move the building materials to the church grounds on Draaifontein farm. The wagons were pulled by oxen and could only manage about 25 miles a day, so the journey was long and arduous. 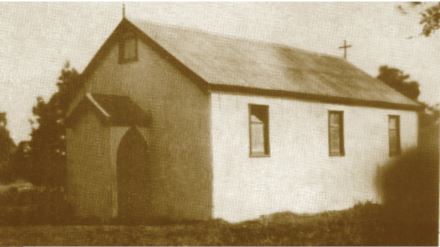 The church was completed in 1904, and the Rev. A.T. Wirgman became its first minister. His congregation consisted of Beckley’s, McCleland’s, Waspe’s, Seaman’s and Johnson’s. The church building was dedicated as a daughter church of St. Mary’s on 12 December 1904 by Bishop CE Cornish as St. Albans. 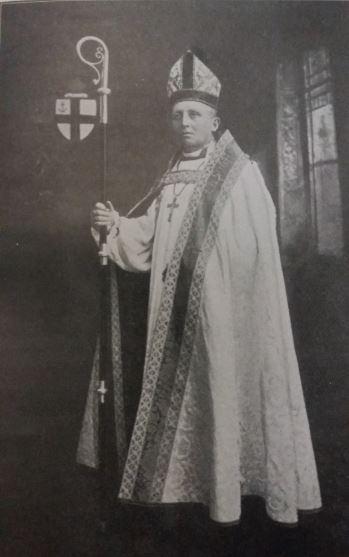 In 1906 Lot A of the farm “Draayfontein” Port Elizabeth, measuring two morgen was officially transferred from Joseph James Beckley to the Rector and Churchwardens of the Collegiate Church of St Mary the Virgin, Port Elizabeth, now a cathedral. The site selection for the small church building and its cemetery was, I believe based on the fact that there were two old unmarked graves in this location, believed to be military graves. Nobody is too sure whether they were Frontier War or Boer War related.

This document deals only with over paid transfer duty from Beckley to St Mary’s Collegiate Church, Port Elizabeth of £76.17.6 and a refund of £1.10.9 for the over payment

Joseph James Beckley would most definitely have influenced the naming of the church. As the well-known St. Albans Abbey and present day cathedral built in the 11th century around the shrine of St. Alban executed in AD 303 and the first martyr in Britain, is only about 16 kilometres east of his birth place, Bovingdon. Furthermore, Flaunden the birth place of his father Joseph, is even closer to Hertfordshire’s cathedral city.

In the early days, the parson would make his way from St Mary’s to Greenbushes on horse-back. The journey usually took up all of Saturday morning and after lunching in Greenbushes he would be met by Joseph James or another of his parishioners and taken to Draaifontein in the afternoon, usually by cart.

If weather conditions were bad, this journey could take two days. He usually stayed overnight with the family and the following morning conducted the Sunday service The singing of hymns and the sermon resounding in the impressive wood and iron church with its timber panelling. After the service when all were inspired the parson would have a leisurely lunch with the family and guests. With decent weather, he could return to St. Mary’s in good time for evensong. 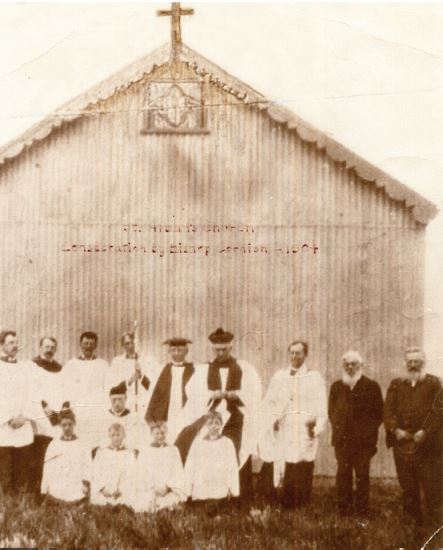 The church lacked adequate ventilation, so during the hot summer months the alter and organ were often carried outside and the service conducted under the shady trees. Winter also had its own particular problems, and on dark inclement Sundays with few windows and no lighting other than candles parishioners sang only the very well known hymns. 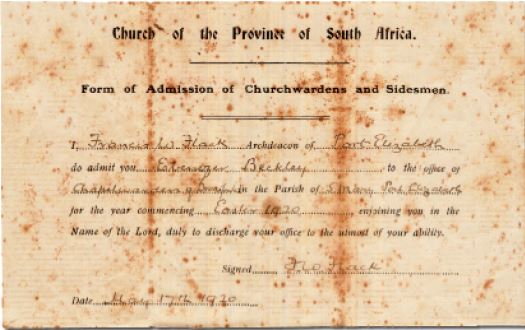 Form of Admission of Church Wardens

In a story related by Esmé Morkel nee Beckley, who attended Church and Sunday School there, she remembers:

“…there was corrugated iron outside and the whole inside, walls and ceiling panelled in pine, well varnished and always the hum of bees which lived in the walls (periodically smoked out by uncle Ebb) and somehow it was always summer. We had church services once a month.”

In 1919, there was still a debt of £ 100 outstanding on the church mortgage. Gwyn Beckley, Ebenezer’s wife aided by other members of the congregation, made a determined fund raising effort, organising fetes and social functions, the proceeds soon clearing the outstanding debt. 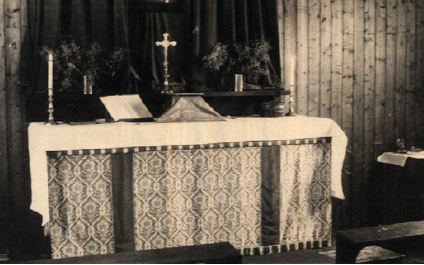 During Rev. Harvey’s time at St. Alban’s, his wife started a Sunday School, which she held beneath the trees. This was lovely on fine summer days but not ideal in all weather, and in 1951 when the city of Port Elizabeth’s electric trams were scrapped, one was purchased. It was transported to the farm, fitted out with altar, benches and once comfortable and completely refurbished, blessed for use as a Sunday School. 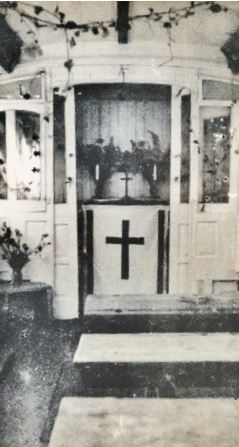 Interior of the Sunday School Tram

With further growth in the community, the tiny church with its quaint “tram” was no longer adequate and it became necessary to expand. In 1971, a new building fund was started and with the tireless efforts of Gwyn Beckley and other parishioners sufficient funds were raised in almost no time at all. The present church was built and furnished without re-course to either loans or mortgage. 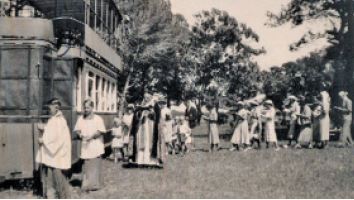 Blessing the Sunday School Tram in 1951

The Rt. Rev. Phillip Russell, Bishop of Port Elizabeth, dedicated the new St. Albans on 18 June 1972, and the Rev. Michael Hall was the minister.

In 1976 extensions were undertaken, adding a kitchen and a room for the Sunday School. The school room was dedicated by the Bishop in June 1976. 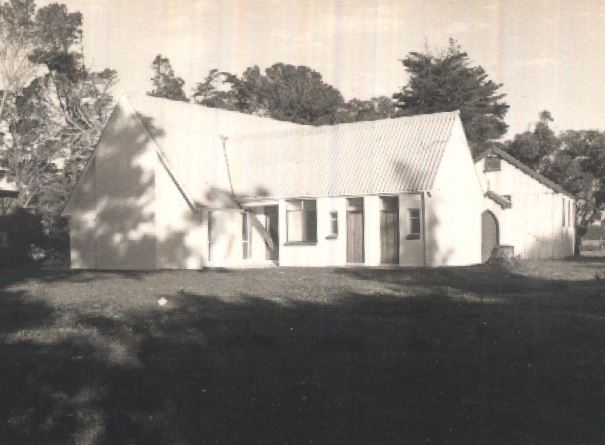 On Sunday 17th July 1988 one hundred years after the first “in house” service, St. Albans celebrated with a commemorative service conducted by Archdeacon Derek Hill of St. Marys, St. Albans original sponsor. This milestone centennial service was attended by many of the local community and the Beckley family, who came from all over the country to be there on that very special day. 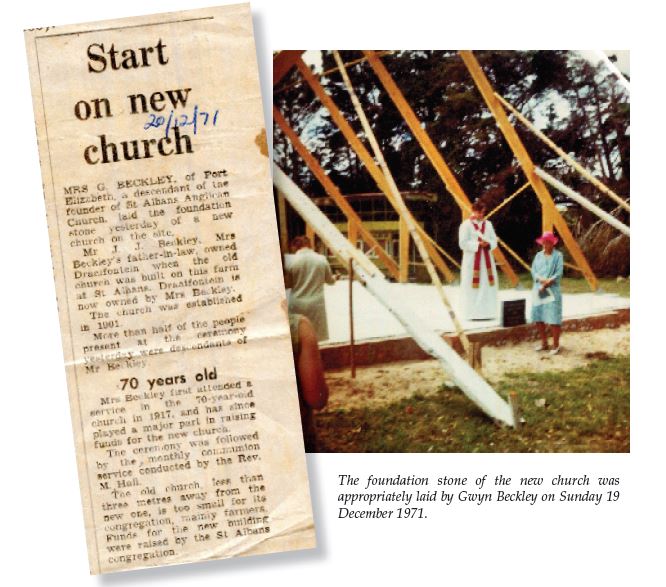 During this time when the new church came into use the antique tram was “discovered” by members of the Port Elizabeth Museum and eagerly transported back to the city for restoration. Unfortunately, the original church was not so fortunate and has not survived.

The church showing the new kitchen and the Sunday school extension

Most of the pews were donated by family members with each pew having a brass plaque attached in recognition of their contribution. The example opposite was donated by Audrey, Clive and Lawrence Beckley in memory of their parents.