The name Samuel Makama Martin Masabalala is not well-known in Port Elizabeth nor is the fact that twenty-four people were killed in what subsequently became known as the Masabalala Riots of 1920.

What is the background to this massacre and what triggered this deadly train of events?

END_OF_DOCUMENT_TOKEN_TO_BE_REPLACED 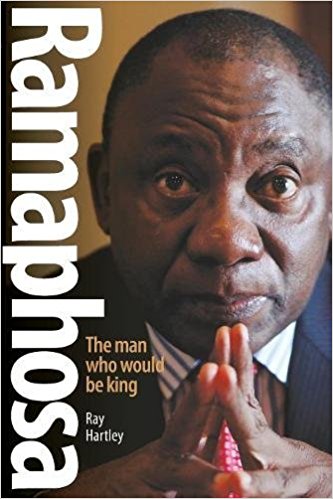 A delight to read but more background political context than detail on Ramaphosa himself.

END_OF_DOCUMENT_TOKEN_TO_BE_REPLACED 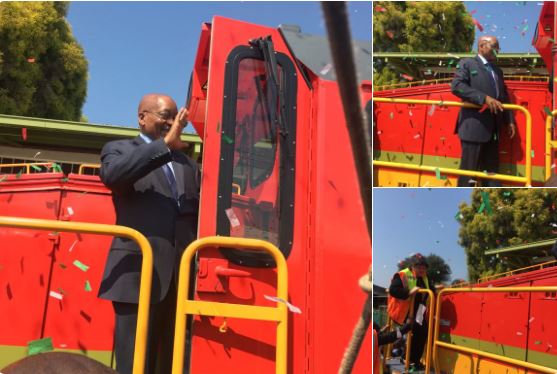 South Africans yearned for the ANC’s NEC meeting last weekend to do the right thing. The ANC failed at that puny hurdle either due to loyalty to their leader or the simple reason that they too are captured. Neither did Zuma fall on this sword. Instead he sat impassively at the meeting while his Comrades vilified him. What has not yet been found is incontrovertible evidence of Zuma’s hand in this malfeasance.

What chance is there that the smoking gun will ever be found?

Main picture: Transnet’s new locomotives on which the Gupta’s will receive a commission of R10m per unit

END_OF_DOCUMENT_TOKEN_TO_BE_REPLACED 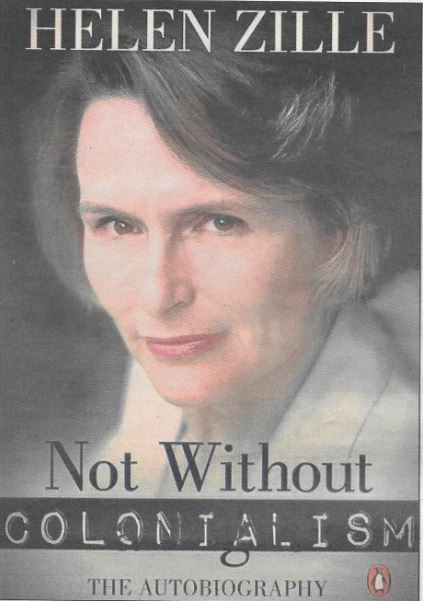 In my mind, there are two notorious tweeters: Donald Trump & Helen Zille. Both use it to vent their frustrations. In neither case has its output been beneficial to the sender. In Helen’s case, it could result in some drastic action shortly.

What is the prognosis?

END_OF_DOCUMENT_TOKEN_TO_BE_REPLACED 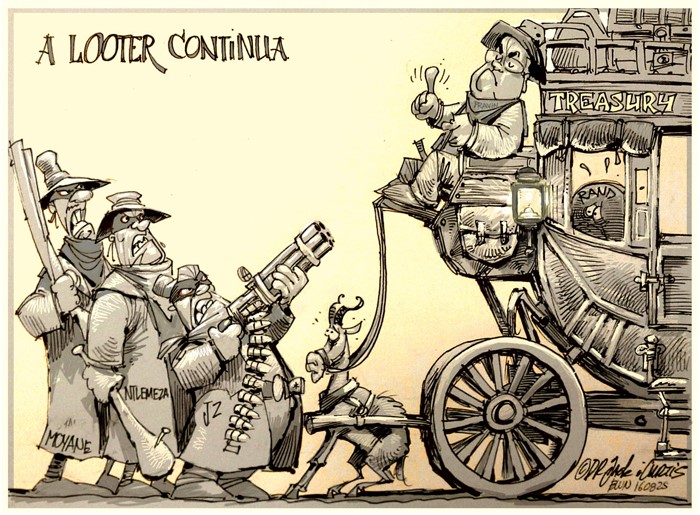 In a surprising inastute move, the ANC used Jacob Zuma as the face of its Local Government Election campaign – literally its poster boy if you will. If anything, his visage signalled a reason amongst the traditional ANC supporters why they should NOT vote ANC in the Local Government Elections. For the opposition, Zuma was and is the gift that keeps on giving.

Given this fact, should the opposition not be pleading with the ANC to retain Zuma as President, rather than lambasting them for having such a feckless, fatuous, venal leader who is clearly out of his depth?

Main picture: The frontline against corruption and “state capture” is manned by Pravin Gordhan

END_OF_DOCUMENT_TOKEN_TO_BE_REPLACED 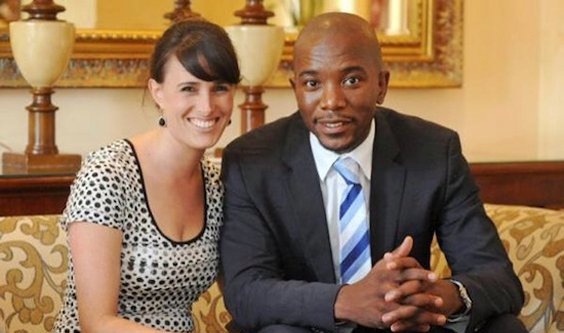 Stating the obvious, the easy work has been done by appointing the new Mayors. Even that was not as smooth as expected especially when the EFF accused Herman Mashaba, the DA’s candidate for Mayor in Joburg, as being “anti-black.” It is a matter of record that the EFF have been a disruptive influence with incendiary speech and spectacle being their trademarks. Will the leopard change his spots in order to play the coalition politics’ game or will it continually blackmail its coalition partners?

Contrary to the news headlines, the EFF only received 8.2% of the vote nationally. The only reason why the EFF is able to punch above their weight is that they are the kingmaker in most of the “hung” councils. The only glue that binds the DA & the EFF with such divergent policies is their desire to dethrone the ANC.

Nothing more and nothing less.

END_OF_DOCUMENT_TOKEN_TO_BE_REPLACED 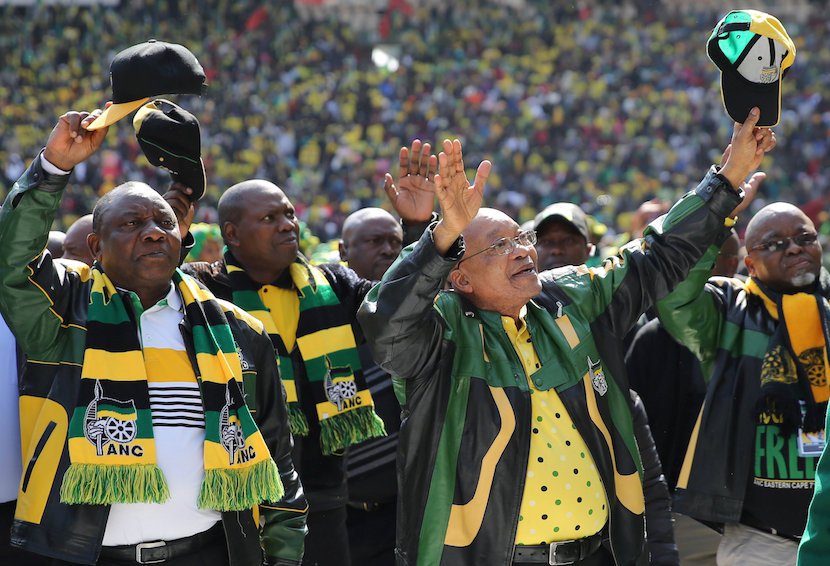 With the Reverend Frank Chikane alluding to the reset button as being an urgent required by the ANC to rectify itself before the next General Election, is this a real possibility or will the real solutions remain elusive, cast aside in deflection and CYA activities ?

END_OF_DOCUMENT_TOKEN_TO_BE_REPLACED 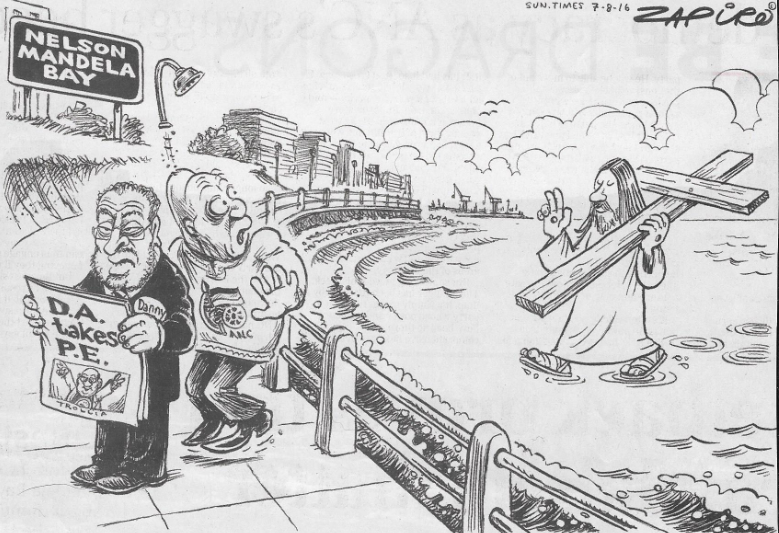 The Local Government Elections 2016 – LGE2016 – have irreparably altered the South African political landscape. With three major metros requiring coalition governments, diametrically opposed opponents will be forced to compromise. This requires political maturity which heretofore the EFF has not yet displayed. Instead petulance and disparaging taunting comments, often with racist connotations, have been the order of the day.

What is the likely outcome?

Main picture: The inimitable Zapiro on the 2016 Local Government Elections in South Africa alluding to the fact that Zuma had commented that the ANC would remain in power until Jesus came again

END_OF_DOCUMENT_TOKEN_TO_BE_REPLACED 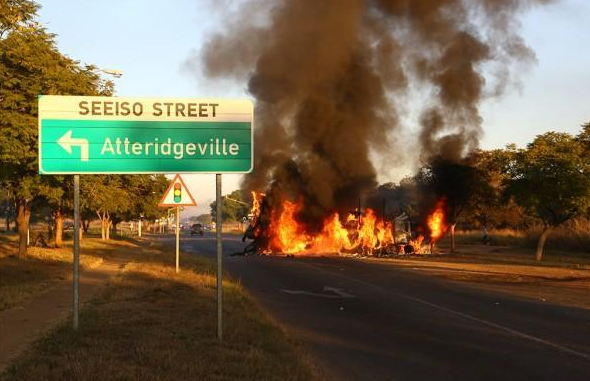 With the patina of age, the real ANC has been revealed. Like in a 22 year old marriage, the state of the relationship is not determined by telling one’s spouse how much one loves them but by showing how much one cares. So it is with the riots in Tshwane. The ANC members wanted one candidate yet the party unilaterally foists another candidate on the metro.

That is one dimension of what has occurred. What is more illustrative is how the members actually reacted. No longer was it robust debate but rather an unedifying display of base emotion? What do those reactions reveal of the members’ real psyche and the current state of the ANC?

Main picture: Scenes of violence and wanton destruction in Pretoria which the SABC banned South Africans from viewing