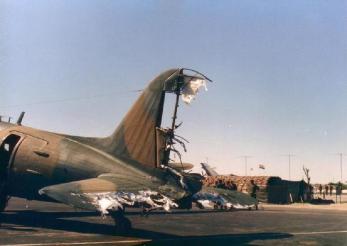 Essentially this feat is akin to driving without a steering wheel. All wars produce incredible stories of people or machines surviving the most horrendous damage. So it was with this South African Air Force Dakota in May 1986. WW2 produced many such examples; the most notable was that of a B17 returning from a bombing mission over Europe. This story originally appeared on the SA Military History website but I would like to share it.

Main picture: A most graphic picture of the Dakota’s non existent rudder and shattered elevators