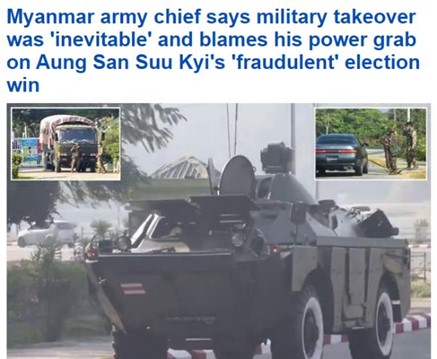 The SADF process, that so many white South Africans endured against their will, wasn’t such an aberration after all.  The military mind is the same no matter where you find yourself.  What made me rediscover this?  It was this article on the coup d’etat in Myanmar.  I am not talking about the coup itself, although I believe most Generals have wet dreams above usurping power, it was the picture that invoked suppressed memories from 40 years ago.

I’m sure that just about every troepie experienced what I went through but I’m documenting it so that us ou manne can chortle about it and also impress our progeny about how tough our life was.

We had hardly settled in and we still had our long hair when the Corporal called the hut together.  He told us that we had a week to get our doibies or mosdops to shine like a mirror.  For those who were lucky enough to escape the clutches of the SADF, let me explain.  Along with being overloaded with a multitude of things, including underpants in case some of the more backward of us had never been lucky enough to own some, we were issued with our staaldak (tin roof).  The steel helmet was a bit like a Russian doll – it had another helmet inside – the doibie or mosdop.  This was a plastic helmet with the adjustable webbing to suit various head sizes and could be used on its own, mainly for ceremonial purposes.  Its surface had a rough texture to give it a matt look like all good army equipment.

The Corporal explained how to do it in short sentences, in Afrikaans and with a fair sprinkling of expletives so that we would not misunderstand him.  You first rub it smooth using Goldilocks (the softer brass version of steel wool) and then you polish it with a cloth and Brasso until you have no fingerprints left.  Over that period in training, we were introduced to the many wonderful and varied uses of Brasso.  Who would ever have thought that that humble tin which Mom kept in the cupboard under the sink and which she brought out under duress every now and again, would be our daily go-to cleaning product.  It got used up just about as fast as our boot polish.  After that week, most of us had managed to transform our doibies into a shiny object not envisaged by those who drew up the specifications for said item – Helmet, Inner, Soldier’s, Plastic. (For the uninitiated, in the days before computers and fancy search engines, the Army relied on a manual filing system and hence inverted the description and started with the most important descriptor and ended with the least.  Another great example was Box, Soldier’s, Steel – AKA trommel or large steel storage box issued to every troep.)  Unfortunately, some were not prepared to work their fingers to the bone and, using the Army technique of divide and conquer and calling us all kak sleg (shit bad), the whole lot of us were punished.  Good old collective guilt.

The other bit of irrelevant shining up was the boning of shoes and boots.  Again for the uninitiated, this involves the thick smearing on of polish, Kiwi, Military Tan.  You then gob on that and, using small circular motions, rub it with a finger in a cloth until it’s dry and hard.  The hard won mirror shine is impressive but banned by the army as it can promote cracking of the leather particularly where it flexes.  Nevertheless, it was widely practiced and, indeed, a right of passage.

Back to the photo that started this misty memory.  The other little army exercise in mindlessness was the weekly unit-wide inspection.  Apart from deep cleaning your bungalow to within an inch of its life, mowing the lawn and whitewashing rocks, every hut or tent was issued a variety of vehicles to be washed and polished on that day.  Here again, the vehicles had been originally spray painted a matt Nutria Brown, #947854 Hex Color Code.  Many specialists had carefully and expensively determined that as the ideal basic camouflage colour for South Africa, but by the time we received them, they were shiny.  It was our job to ensure that that shine was enhanced and deepened every week.  It was not a job for Wynn’s Car Polish but the common or garden Cobra floor polish.  Who would have thunk that yet another one of Mom’s humble cleaning products would be so ubiquitous.  But, it didn’t end there.  We got hold of white, silver and yellow enamel paint.  We would make sure that various items, such as the tops of wheel nuts, were picked out in one of those colours.

We might not have white walled our tyres, but we sure pimped our ride long before that expression ever gained traction.

PE of Yore: Interesting aspects during the Construction of the Harbour

The Chances of Surviving Once Hospitalised with Covid are not Good

PE of Yore: The Mystery of the Town Hall Roof Parapet