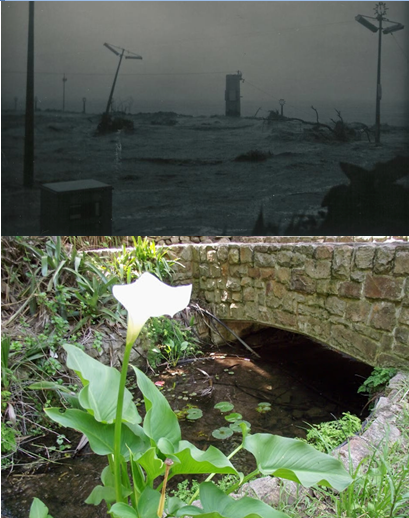 Today the Shark River is a non-descript stream – more of a trickle really – that tinkles its way through Happy Valley. Being no more than 15kms in length with its source in the location marked Drinking Place on the maps, yet this self-same river was once the earliest water supply of Port Elizabeth. How was this miniscule river together with the Donkin Stream next to the Donkin Reserve capable of supplying the Town’s needs? Logically the water from the Baakens River should have been the preferred source being not only closer but more reliable with a perennial water flow.  The other mystery to me is how this docile placid stream is able to increase by the extent that it does during flooding despite having such a minute catchment area.

Main picture: The Shark River on 1st September 1968 and recently. How could such a docile placid stream be transformed into such a violent raging torrent, sweeping all before it.

The Shark River arises in the Mount Pleasant area and flows through Walmer, across Athlone Park and the school sports field and flows out to sea at Happy Valley.

In one of the earliest pictures of this river, it is shown flowing under a railway line to the sea. Even in those days, it could not have been a significant water flow yet it was shown to supply water to Port Elizabeth. The initial Dutch settlers in the area, christened this tiny stream Sakrivier. This had nothing to do with “pockets” but rather to describe the river sinking away into the sand at Humewood Beach. This is typical of many rivers in this part of the Eastern Cape with the Maitland River Mouth being a prime example. Once again the subsequent English Settlers failed the bilingualism test, and incorrectly translated sak into Shark.

Perhaps this explanation is apocryphal, but it certainly is plausible. The adjacent features now also carry the name Shark: Shark Rock & the latest addition, the stunning Shark Rock pier.

Below is the first photograph of Humewood looking down from the Brookes Pavilion towards the current slipway. The river in the foreground is the mouth of the Shark River. For interest sake, the building was the original infectious diseases hospital called the Lazeretto. It had been built at this location because it was well outside the city limits.

This isolation was soon to change as the adjacent Humewood Beach became the premier swimming beach in Port Elizabeth.

Even this later photograph shows Shark River flowing into the sea. What probably affected its strength was that it had been dammed to provide water to Port Elizabeth. This dam was called Frames’ Reservoir. Where Happy Valley is currently situated was Gomery Farm.

In this shot, no river is visible.

In this picture from the 1920’s, the Shark River was definitely sakking into the sea sand.

On the 1st September 1968, the Shark River showed what it was capable of. From a tiny stream, engorged with rain water it grew to at least a 1000 times its previous size, sweeping all before it.

The docile enchanting Shark River that most visitors to Happy Valley would not suspect of being a river, has again shown its true colours recently. With the ground saturated with moisture, during a sudden downpour, Shark River burst its banks, rushing down the Humewood pathway and stairs before washing a ditch about a meter and a half deep and four meters wide under the Humewood Bridge on its way to the sea.

Shortly afterwards it reverts to its docile mild mannered self without yet again having any pretensions of being a river. Its source is in the Mount Pleasant area and flows through the Boet Erasmus Stadium, here showing its best 1960’s imitation.

Further up is the Shark River Golf Club

Why the 1968 flood in the Shark River was so devastating

The damage to the old bathing house was indeed due to water raging down the Shark River valley. However it was not due to the rain alone. The damage caused was mostly due to the breaking of the “Boet Erasmus Dam”.

What happened was that the high grass embankment behind the Eastern side poles on the rugby field acted as a dam wall. All four sides had banked seating – either grass (as behind the poles at both ends) or the open stands (North) and the grandstand (South). There was also a “black” stand on the northeast corner of the field. It is probably here where the water would have broken through and then run over the tarred car park behind the stand for blacks. Being tarred the water probably gathered momentum there.

When the embankment gave way, there was a deluge down the small valley with volume of water obviously making a higher wave than it would have done had the valley been wider. In the process, Happy Valley was swept away as was the roadway across its mouth. There was no underpass to the beach then (as was built post-1968) and the removal of that stretch of roadworks and the Palm Grove/Dollorico Cafe/eatery on the Humewood side of the valley all probably added to the effect the deluge had on the bathing house foundations.

But for the Boet Erasmus “Dam” and the shortsighted engineers who saved money by channeling the Shark River through small storm drains under the road and across the beach, that roadway and possibly the beach house might have survived.

From the Herald: THE 67-year-old Shark River Golf Club in Port Elizabeth has been shut down by an army commander because he believes golf balls are dangerous. Forest Hill army base acting commanding officer Lieutenant-Colonel Vusumzi Ngcobo, who has been in the position for about a month, issued the order on Wednesday, calling golf a health and safety risk.

His heavy-handed response comes after a golf ball smashed the back window of a Toyota Corolla parked near the entrance to the base on Sunday last week. A competition at the golf course, which is in the army base, was cancelled at the weekend. Following the order, anyone caught playing golf on the course will be arrested or escorted off the base by military police.

Port Elizabeth of Yore: The Railway Line to Humewood and the Driftsands