Port Elizabeth periodically experiences floods. Amongst the most devastating was the flood from Tuesday 19th November to Thursday 21st November 1867.  During 11 hours on the Wednesday and Thursday, 161.5 millimetres of rain fell bringing the total for the three days to 225.5 millimetres. While only two lives were lost, damage to roads and houses was estimated to be as much as £30,000.

Perhaps its effect was exacerbated by the fact that the roads were not tarred and the flood waters gushed down the natural water courses, formally kloofs or streams, causing mayhem. But the most catastrophic effect was the silting up of the harbour. As a consequence, the recently completed breakwater had to be demolished.

Wednesday 20th November 1867 and Thursday 21st would be remembered by the denizens of Port Elizabeth forever, much like the citizens of 1968 would forever recall their experiences and swop stories with fellow inhabitants. The  worst affected area was South End which was the epicentre of the storm.

JJ Redgrave records the storm as follows: “The leaden aspect of the sky all around betokened an approaching storm. Towards evening, the wind veered more to the south-west and moaned in fitful gusts as if impatient of restraint. The rain came gently at first, increasing by degrees until by 9pm it fell in sheets.

Soon the lightning began to flash in vivid streaks and the distant rumbling of thunder mingling with the deep roar of the breakers on the shore was sufficient to make the stoutest hearts shudder. There was not a house, probably in the whole town, and still less at the South End, with proof against the inroads of such a storm. Towards midnight the thunder and lightning ceased but still that dismal hollow roar upon the open beach was heard mingling with the howling storm. As the night wore on, the storm seemed to increase in violence rather than to abate its fury and few indeed were the inhabitants who managed to get an hour’s repose. Everybody had his own particular grief thrust suddenly upon his hands, some more than others.”

It was at South End that the storm vented its worst fury, particularly in the Rudolph Street area where the storm wreaked its fearful havoc. From the top of the hill, the rushing waters gushed down as a mighty torrent ripping out fencing and verandahs. As the water gathered force, ripping up the road, it drove the masses of flotsam and jetsam before it on its journey down to the sea. It was a shocking experience for the residents of South End.

Once a gully had been excavated in Rudolph Street, the waters from the surrounding streets seemed to find their way down this doomed street until the gully attained the dimensions of a river. As the water eroded away the soil, first one and then another house was undermined and toppled down into the maelstrom of a seething mass of water which had by now become some 6 metres wide and 4 metres deep.

The fear, uncertainty and anxiety were exacerbated by the darkness of the night. Safety was everybody’s main concern but where were they safe? As the waters of this newly created river increased in strength and widened in girth, it sucked in house after house, culminating in the destruction of twenty houses in total.

Heart-wrenching scenes were played out that night. One such heart-breaking incident was a child named Harvey, who ignorant of the danger which threatened her, left her mother’s house in search of help. In the dark moonless night, she stumbled into the torrent rushing past her door. In the swirling, churning mass of water, she was carried down the hill probably drowning en route. Her lifeless body was retrieved, buried deep in the sands of the Harbour Board Bridge.

The mass of homeless women and children scurried about desperately seeking shelter while the menfolk armed with lanterns rendered assistance wherever they were able to. Credit has to be given to the occupants of the accommodation still standing as they offered shelter to those deprived of their own homes.

. The flood silted up the harbour making it inoperable.

The streets of South End were completely wrecked, more akin to riverbeds than streets. The worse affected were the Malays near the foreshore. The trolley bridge erected by the Harbour Board at the foot of Rudolph Street was also swept away by the fury of the storm. Moreover the Union Bridge lost its southern buttress and grave fears were expressed for its safety.

According to Redgrave, “The road in South Union Street opposite Mr Webster’s home was badly cut up” which exposed the pipeline as there were holes 3 to 4 metres deep. Furthermore Redgrave noted that “higher up, near Neslin Castle, there was another immense hole through which the water seemed to have passed with great force in front of a number of small cottages situated in the valley at the back of the Castle.

The residents of South End experienced many tragedies but also miraculous escapes. A Mr Simon Maddan needlessly lost his life through a foolish attempt to recover some driftwood near the Union Bridge. He rushed into the stream which did not appear to be more than a few feet deep. He disappeared almost instantly, and his body was never recovered. A bystander actually shouted at him warning him of the danger, but it was too late as he was already in the stream. 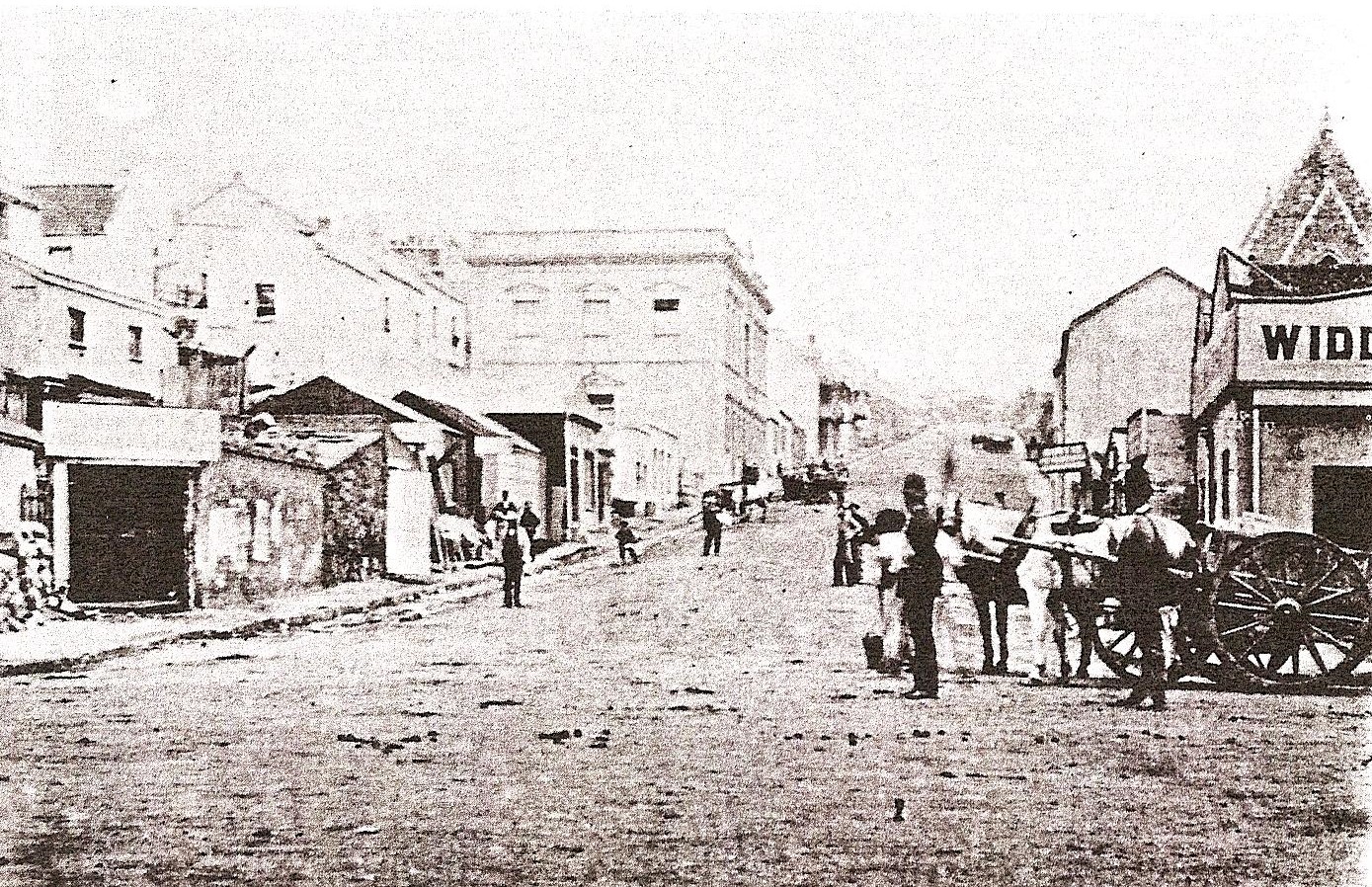 Many lucky escapes were also reported. One such case was a certain Mrs Hayes and her child. They were found the next morning buried beneath a wall. They were fortunately found in a very exhausted state by a rescue party and successfully extricated. Another miracle escape was experienced by a certain Martin Devitt. He had just left his stable where he had gone to inspect how his horse was weathering the storm when the whole building collapsed. Martin was fine but the unfortunate animal did not survive.

Redgrave reported that “Russell Road, which up till then had been regarded as the masterpiece of the Town Engineer, was reduced once more to its pristine ruggedness and was little better than an impassable Kloof, so smashed up that even a horseman could not pick his way over it.

A flood of water was rushing down it in headlong fury and the inhabitants of houses at its foot had enough to do to save their lives and furniture from between cracked walls.”

Originally Donkin Street was a stream which initially supplied Port Elizabeth with water. On this inauspicious night, the Street reverted to its original purpose and form. Donkin Street near the Mechanics’ Institute presented the appearance of a large ditch indicating that the volume of water rushing downwards must have been enormous. The Institute itself was badly cracked and had it not been planked up, it would have fallen into the ditch below.

The sand and other debris were deposited like that of Russell and White’s Road in Main Street to the depth of a metre.

One of the escapes reported in Russell Road related to a Mr Suter who was walking up the hill just before the storm reached its height. He was suddenly knocked down by a huge stone which was being pushed downhill by the force of the water. By moving to the sidewalk, he managed to get clear of the avalanche of sand and rocks rushing down the hill.

At White’s Road, the destruction was even greater. The main sewer leading from above the old Theatre to the sea had become choked up and burst. At the same time the gas pipes in this part exploded. The stone buttress of the retaining wall of St Augustine’s Church was swept away and carried several feet down the roadway, causing a chasm several feet deep extending across the road, thus cutting off all communication between Market Square and White’s Road. The ultimate repository of all this rubble was Market Square itself.

The other approaches to the Hill also showed the devastating effects of the storm. The drains were washed away and the huge stones of which they were composed, were scattered about or thrown down in deep gullies.

The Beach also showed evidence of the terrific storm. The larger vessels rode it out successfully, but a number of the smaller vessels were not so lucky. A number of these vessels sank at their moorings, having been swamped by the force of the rain that filled them. These included five sailing boats, Birkey’s rowing boat, a whale boat and several others.

Yet another miraculous escape was Lieutenant Shaw of the 86th Regiment. While passing from a friend’s house en route to his cottage, a sudden flash of lightning revealed a yawning chasm ahead of him. One more fateful step would have been the death of him.

The Reverend Pickering of St Mary’s Church also experienced a lucky escape, maybe not as dramatic as Lt. Shaw but equally as distressing for the individual. Pickering fell into a ravine formed by a current at the top of White’s Road and, after floundering about up to his neck in the water, managed to scramble to safety without injury.

Effect of the silting in the harbour

Jon Inggs summarised the effect as follows: The whole silting problem was brought to a dramatic climax overnight when the inner basin was rendered useless. An average of 1 , 37 metres of silt was deposited. The 1,37 metres of water that remained was no longer sufficient for the type of vessels that had made use of the basin during the previous 18 months . Since the first soundings were taken in 1864, the average depth at low spring tide had decreased by 2 , 65 metres or 66%. The November flood alone had contributed 52%.  Thereafter the depth remained relatively constant.

The PE Telegraph reported that: The Baaken’ s River came down with terrible force .. . Passing the bridge, the water cut its way through about thirty yards of sand which it swept with it to the breakwater, where it is at present lodged, adding an unexpected and formidable difficulty to the efforts of the Harbour Board to deepen its basin.

The Herald recorded that: Within the shield of the Breakwater there was also much destruction. Not fewer than twelve boats sunk at their moorings, filled with water by the rain and sea … The tramway bridge erected by the Harbour Board … was also carried away by the fury of the storm … The Beach speaks with terrible eloquence of the roughness of the storm … large craft rode it bravely out .. . But a number of small craft sunk at their moorings within the Breakwater I having been actually swamped by the force of the rain …

Port Elizabeth of Yore: The Grandiose 1905 Harbour Scheme That Never Was