Whilst the Cape Colony might well have possessed slaves, the establishment of Port Elizabeth came at the culmination of the emancipation efforts by the British government. Hence the prevalence and practice of slavery was not of such great importance as it was closer to Cape Town.

In 1807 the British government banned the slave trade to all her colonies, including the Cape. This meant that no more slaves (from any destination) could be sent to work in the Cape. However, those who were already in the Cape continued to work as slaves until 1834 when all slaves in the British Empire were to be emancipated. Many of the slaves chose to remain on with their owners while some started a new life in and around Cape Town working as tradesmen. Gradually these people became absorbed into the Cape community.

Main picture: The reality of slavery

In his Tax Return of 1824, my great-great-grandfather, the Rev. Francis McCleland of No. 7 Castle Hill fame, reveals that while residing at Clanwilliam in the Western Cape, he possessed a young female slave who presumably acted as the family maid. As no further information is available, I am unable to provide such information as her nationality, home language or whether she was born from slave parents. What is interesting to note is that the Rev. McCleland would only have purchased her after his arrival with the 1820 Settlers in May 1820, id est, after the abolition of the slave trade but before their emancipation in 1834. Interestingly, in correspondence with a superior, he makes a formal request for a “prize Zulu” slave. At issue with this comment is whether Zulus were ever enslaved. A search of the literature reveals that slaves in the Cape Colony originated in India, Indonesia and the east coast of Africa but not from South Africa per se. In that case, the term Zulu probably refers to a black slave as opposed to an Asian slave. 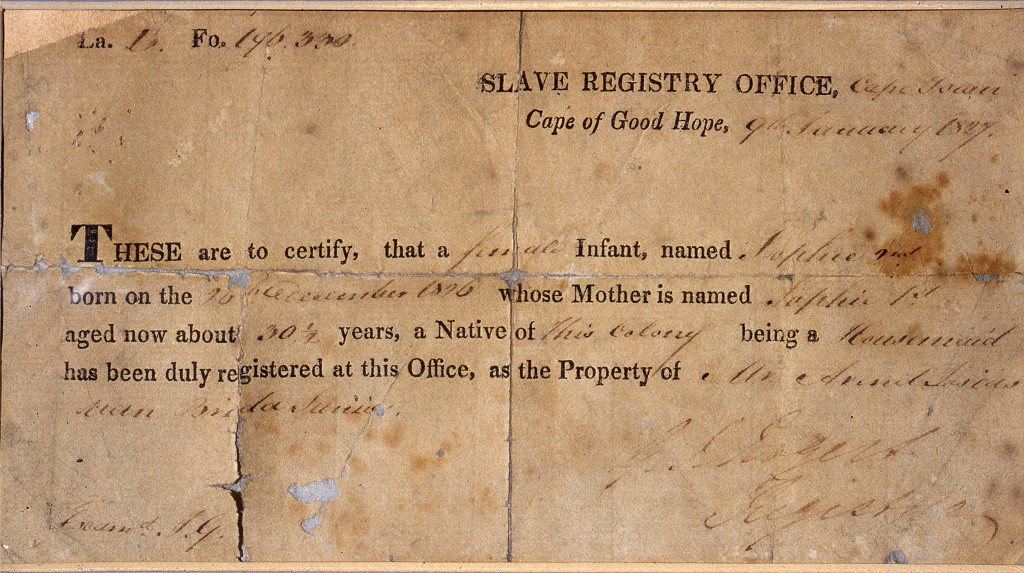 A certificate of slavery for an infant named Sophie

The same census that my great-great-grandfather completed in Clanwilliam, indicates that Port Elizabeth at the same time had 64 slaves. 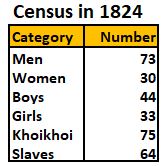 It is unclear who owned these slaves but as the vast majority of the people recorded in this census had in fact only arrived in Port Elizabeth after the Abolition of the Slave Trade Act of 1807 had been passed, this implies that these slaves must have been brought in from other areas in South Africa and were not recent imports. This supposition is buttressed by Government Gazette records in the early 19th century which indicates that several of the wealthier, well-established residents in Port Elizabeth bought slaves in the Cape and shipped them to the Bay. Colin Urquhart notes that “the sealing brig George IV, smelly as she must have been, sometimes carried passengers, and in 1826 it was recorded that she transported several slaves to Algoa Bay for Frederick Korsten and J.O. Smith. The 1820 Settlers were not permitted to own slaves”.

On Friday 1st August 1834, slavery was officially abolished by Britain. Legally these slaves were now ex-slaves or free men, but it was a subterfuge. For the next four years, their bondage took another form euphemistically known as an “apprenticeship.” This meant working for their former owners on an unpaid basis. It was only subsequent to the expiration of this period that they could elect to remain with their former owners as a paid employee, seek employment elsewhere or return home. Surprisingly, or maybe not so unexpectedly, many slaves opted to remain with their former owners as they had known no other life. With the power dynamic tilted more in favour of the employee, treatment improved, and the level of abuse declined markedly. 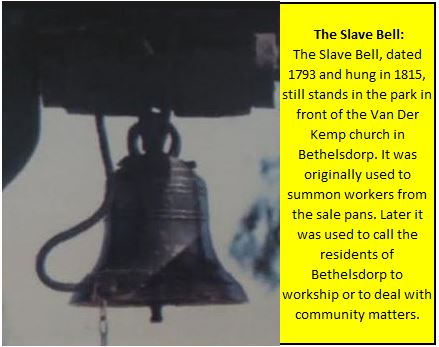 Abolition of slavery was one of the catalysts for another monumental event in South African history, The Great Trek. Having relied on the feudal system of slave labour, the Boers were displeased with the new dispensation. The largest group to leave the Colony came from the Alexandria district under the leadership of Karl Landman.

Celebrations in the Cape following the abolition of slavery

In the local community resided a man who, apart from being the Fort Commandant, took an inordinate interest in civic affairs. One of Captain Francis Evatt’s numerous hallmarks was that of being a staunch abolitionist.

In his excellent book, “Algoa Bay in the Age of Sail (1488 to 1917) – A Maritime History, Colin Urquhart records that “in 1823, Captain Francis Evatt, decided to take action under the Act against a ship’s captain whom he suspected of clandestinely importing two child slaves into the colony. He had noticed the captain of the Cape-owned schooner Stedcombe boarding the vessel in Algoa Bay accompanied by a small black boy. On further investigation, he learnt that the boy belonged to a Mr. Chabaud and that there was also a nine-year-old girl aboard whom the captain had reportedly purchased in Mozambique. Captain Evatt, tried in vain, at his own expense to have those involved prosecuted, going so far as to declare the schooner a ‘prize of war’. He sent her to Cape Town where he hoped the Admiralty Court would take action. Amid some embarrassment, the court declined, and the two children were duly handed over to the vessel’s owner, Nesbit & Co, for whom they became ‘domestic servants in a state of freedom’.

It is believed that Evatt’s actions and efforts over the next four years through the Royal Commission of Enquiry to establish why no action was taken and to recover his expenses (all £135’s worth), went some way to ending the illegal importation of slaves to the Colony. It most certainly marked Port Elizabeth as a port which slave traders would want to avoid”. 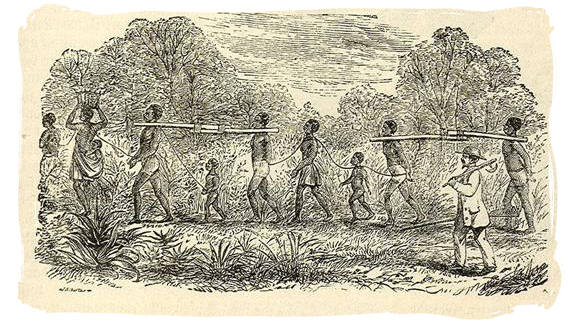 Slaving ship and an eponymous Jetty

While slavery might well have been abolished in the British Empire, it was still flourishing in the rest of the world. Such is the process of death. It lingers for a while, the victim thrashing but with ever-decreasing strength until the Grim Reaper overwhelms its victim. To accelerate slavery’s demise, in 1839 the Royal Navy utilised its ships stationed at Simon’s Bay, as it was then known, to suppress the slave trade. 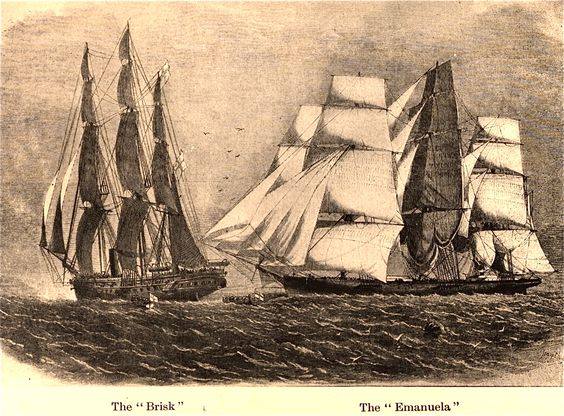 It was while the HMS Curlew, on 26th April 1840, was patrolling just off Port Conducia at the far northern end of the Mozambique Channel – having the previous month sunk the Arab dhow, the Yaruga, suspected of being a slave trader – that it encountered the Dom Pedro Duque de Porto, flying the Portuguese colours. When boarded by men of the Curlew, her captain, Lavachaude Talacchaude, denied that she was a slaving ship. Instead he claimed that they were en route from Rio de Janeiro to Mozambique seeking cargo. This ruse did not deceive Lt Ross of the Curlew. As well as being armed and having a false deck, a search of the brig uncovered copious supplies of water and rice, well in excess of what the crew alone would require for their journey. The game was up. The Dom Pedro was seized. Under a scratch crew including two slaves from the dhow Yaruga, she set sail for the Royal Navy Base at Simon’s Bay under the command of Second Master Lt. H.C. Lew. 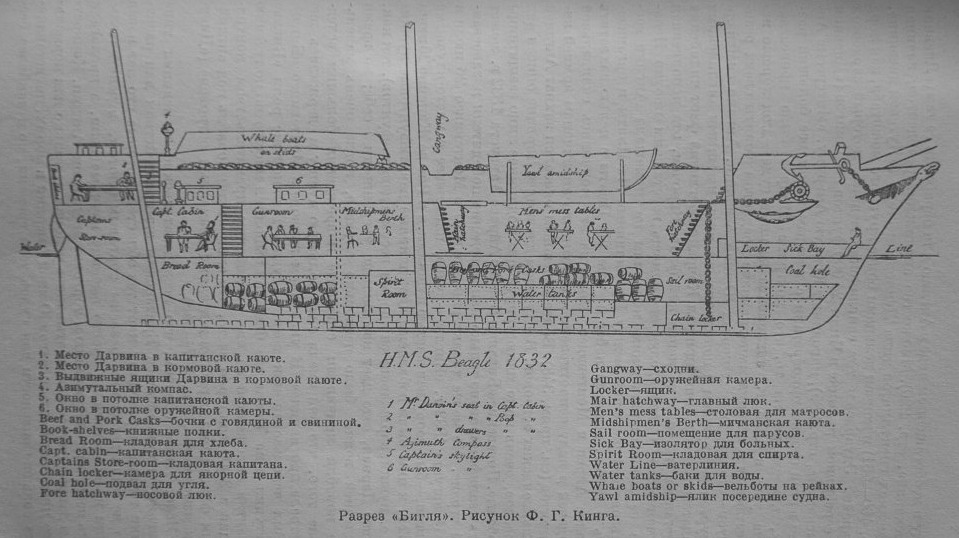 While en route down the southern African coastline, the Dom Pedro encountered a severe gale off the Eastern Cape coast. Badly damaged, being dismasted and with her sails blown out, she limped into Algoa Bay some eight days later. Instead of repairs being attempted, in early June her provisions were auctioned off and she was declared a condemned hulk. Her final fate would unfold on the 10th August 1840 when she was run ashore south of the landing place which lay between the North Jetty at Jetty Street and the mouth of a sluggish stream, known as the Baakens River, so-called after a beacon which previously marked the landing point.

Having stripped the brig of all valuable items, at the end of August, J.O. Smith & Co offered what remained of her for sale. There were no takers. Smith had even removed the cannons which he placed outside his house on the hill as hitching posts. With the passage of time, these cannons have vanished, and no trace can be found of them.

The Dom Pedro Jetty, completed in 1902

The slaver might have met an ignominious end as a rotting hulk embedded in the sand, but for the following 50 years, with its carcass exposed, it remained a stark reminder of the horrors of the slaving days. Early in 1899, work commenced on an iron-piled wooden-decked jetty south of the Baakens River close to this hulk. A later addition to this 486-metre jetty, was named the Dom Pedro Fishing Jetty. Little did most users of this facility realise the sordid history of the vessel after which this jetty was named.

The actions to suppress slavery were now all at sea with British warships of the Cape Station patrolling the Mozambique Channel. The abolition of slavery had throttled the supply of cheap labour where it was needed. As a result, Britain introduced a more “humane” system known as “indentured labour.” This contemptible practice would never infect Port Elizabeth. It too, in the fullness of time, would be seen for what it was, an abuse of people, and scrapped. 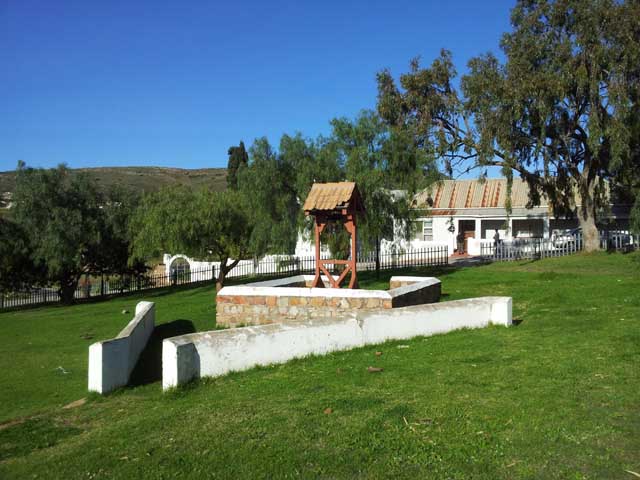 Note: No photos or drawings of slaves in Port Elizabeth can be found. All such images relating to slaves used in this article relate to the Western Cape or elsewhere.

Port Elizabeth of Yore: In the Era of the 1837 Royal Engineer’s Map

Port Elizabeth of Yore: Restoration of Verandah of No 7

Port Elizabeth of Yore: Slavery and the Dom Pedro Jetty