Of course this maxim applies to other wild animals as well. Most at risk are foreign tourists who find certain animals such as lions cute and innocuous. That is as maybe but common sense must prevail. The inevitable happened today. An American tourist was driving through the Lion Park no more than 20kms from Joburg with their window open when the lion struck. In the contest between man and the lion, guess who wins. The woman passenger did not.

What is troubling for me is that there have been calls for this lion to be shot. 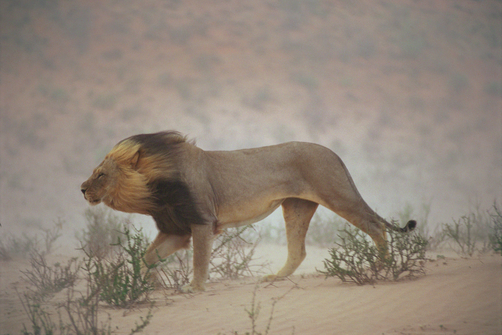 A lion pushes on through a gritty wind in the Nossob Riverbed.

This lion was behaving civilly according to animal norms. As a carnivore he is entitled to the most succulent morsels that it can find. Without even having to stalk and engage in a lung bursting chase, he had fresh meat on tap sitting in a nearby car.

To a human this might sound callous but this is the lion’s thought process as he spotted the hunk of fresh meat metres away from himself. 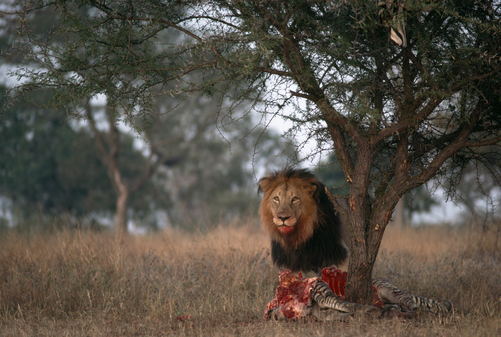 An African lion feeding on a zebra carcass.

This is my nameless friend Malcolm’s view on lions. After sharing my experiences with a hyena during one of my stints in the Army, he then graciously shared his views and experiences with lions. Again please do not let Malcolm know that I am using this intellectual capital without his informed consent but as he is all probability sunning himself at Le Herradura in Grenada Spain, hopefully he does not have the time between diving, hiking, eating and taking extended siestas to read my drivel.

I always worry about lions. When I look at what my cats can do at 4 kg I can only marvel at a 180kg lion’s potential. 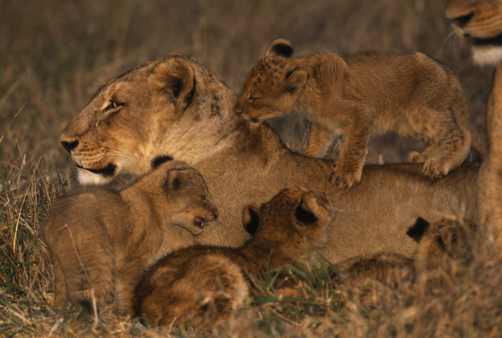 The accepted wisdom is that lions don’t see us, insignificant humans, sitting in the vehicle but only see a large mass bigger than themselves which they steer clear of.

Like your photo of the lioness opening a car door I am waiting for a report of a lion(ess) for whatever cause or reason ending up among the passengers in the game viewing vehicle.

My first sighting of lion with Janine on Olifants River Game Reserve was at a crossing of the Main Railway Line between Hoedspruit and Phalaborwa. It was at night. I picked a male up in the headlights just in front of the vehicle at the rail crossing. One immediately switches the head lights off and uses a spotting lamp with a red filter on it. The process of fitting the filter and plugging the light in took a couple of minutes. He had disappeared. We knew he had crossed the railway line. Janine was shining the lamp and I was driving. She thought he must have gone to the left and down to a dry river bed. I stopped the vehicle after crossing the railway line while Janine shone all over the show looking for movement etc. I was only looking left. There was a small tree (bush) right next to the driver’s door. I happened to glance right and there between the driver’s door and the bush was this male lion. He was unfazed and strolled off down the road in front of the vehicle. Maybe the accepted wisdom is correct. 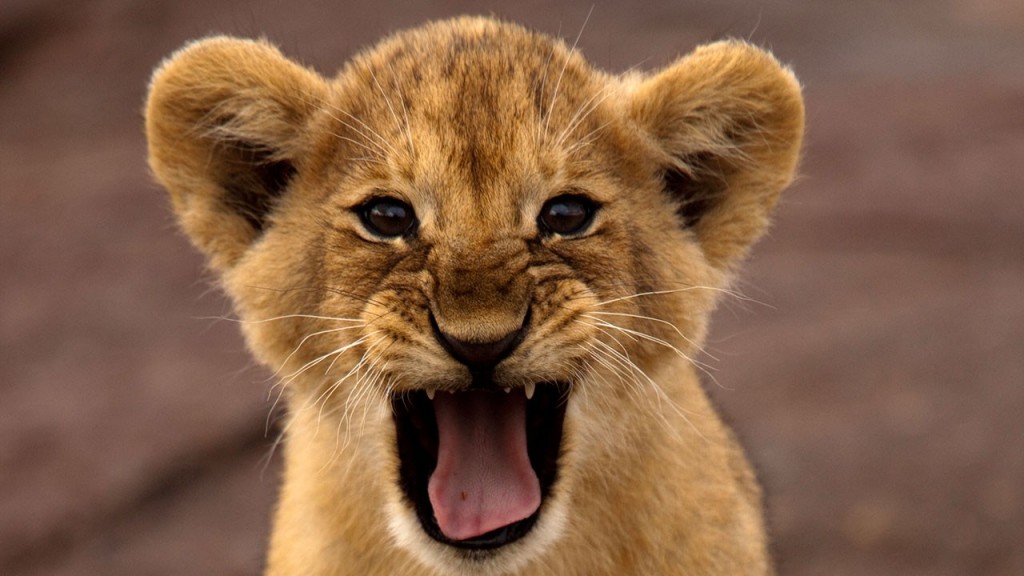 On another occasion on Olifants North Game Reserve someone called in Lions just off one of the roads one night. We were out on a night drive so I proceeded in a Northerly direction along the road. The other vehicles were all pointing south and the viewing spot lights were illuminating a few lionesses near the road on their left hand side (our right hand side). Unknowingly I had split the pride who were about to pounce on some impala that had started running to our right. A lioness at full charge came from our left with the intent of crossing the road and joining the kill. I cut her off! How she pulled up that charge and skirted the vehicle I don’t know. I had visions of her jumping straight through our vehicle such was the intensity of the charge. Once again the accepted wisdom prevailed.

Here is a scary story from February 2011 that I read on News24 entitled “Car flipped by randy elephant bull.” Unfortunately John Somers and his wife Judy of Rustenburg had this harrowing experience whilst driving in the Pilansberg Nature Reserve. Apparently this vehicle was only two weeks old at the time. 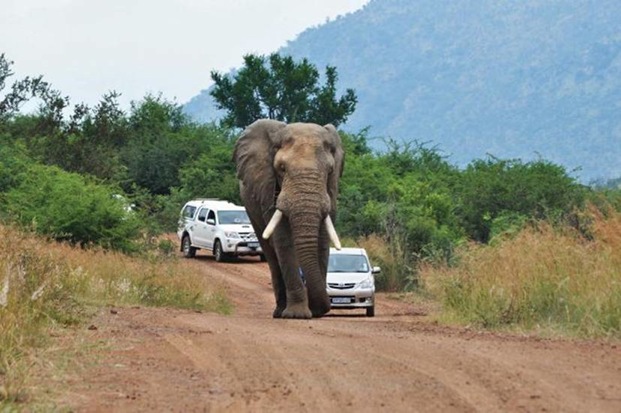 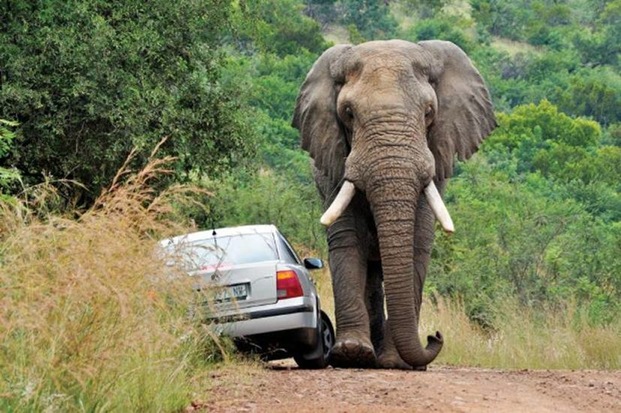 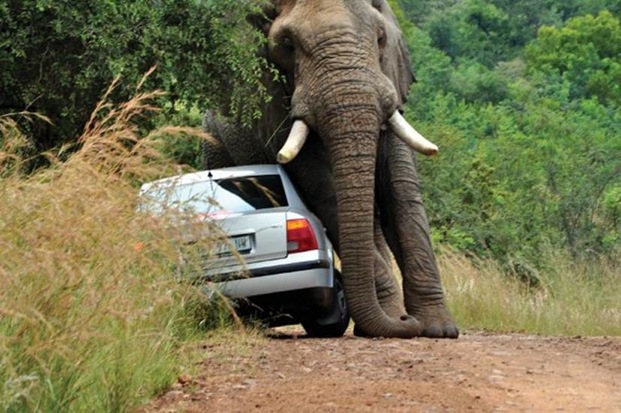 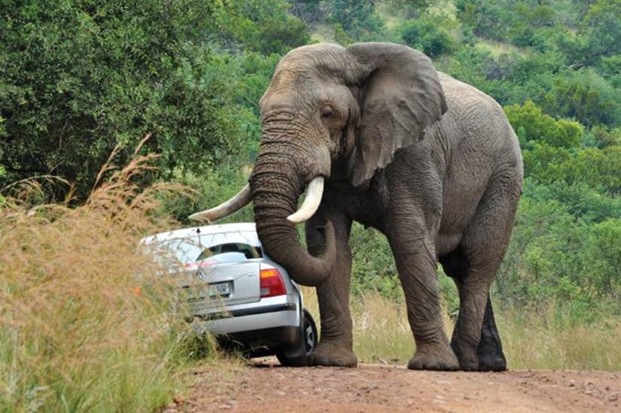 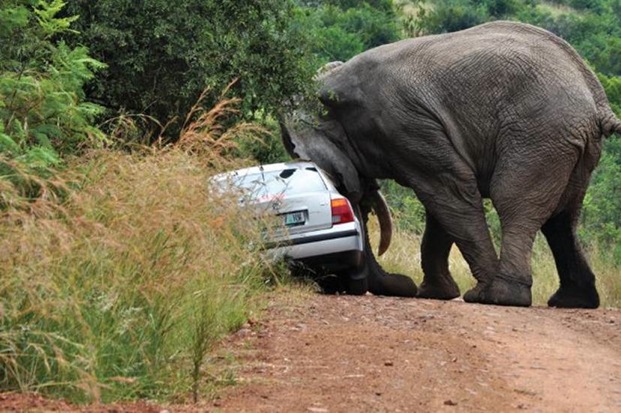 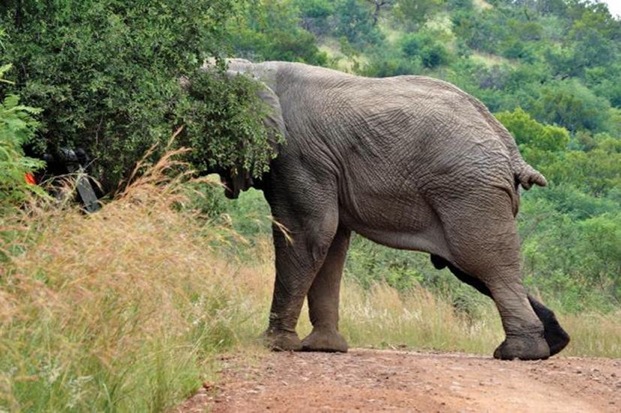 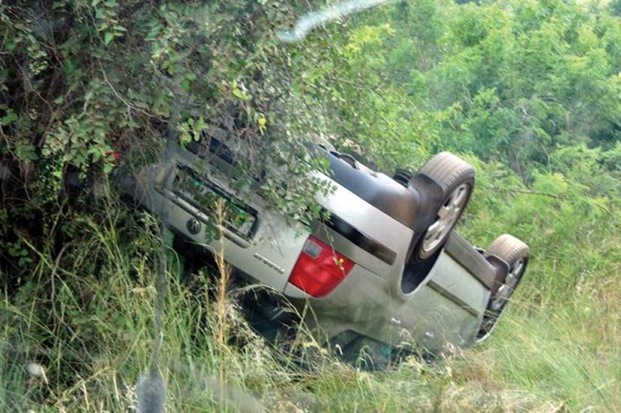 Lions retreat before an indomitable foe

Hiking with the Lions in the Kruger Park