It would not be incorrect to state that as a youngster, exploring the foreshore of Schoenmakerskop, I treated the slimy green pools above the shoreline as little more than abominable, detestable and obnoxious. If they had miraculously disappeared before my next visit, I would have celebrated their demise.

Little did I comprehend the significance of these glutinous bright green preternatural pools. Somewhat implausibly, their appearance belies their significance. In part thanks to a documentary by the timeless David Attenborough, did I later learn about stromatolites, yet I made no connection between these sludgy pools and those cyanobacterial mounds that David, in his inimitable fashion, waded out at Hamelin Pool, Shark Bay, Australia, to view close-up.

Main picture: Stromatolites at Seaview, one of the sites where the new species of prawn like burrower was discovered

What are stromatolites and what is their significance?

Per Wikipedia, Stromatolites are layered mounds, columns, and sheet-like sedimentary rocks. They were originally formed by the growth of layer upon layer of cyanobacteria, a single-celled photosynthesizing microbe that lives today in a wide range of environments ranging from the shallow shelf to lakes, rivers, and even soils.

They usually form in shallow water. They are formed by bacteria such as cyanobacteria. This type of bacteria uses water, carbon dioxide, and sunlight to create their food, and expels oxygen as a by-product. The real significance of stromatolites is that they are the earliest fossil evidence of life on Earth. 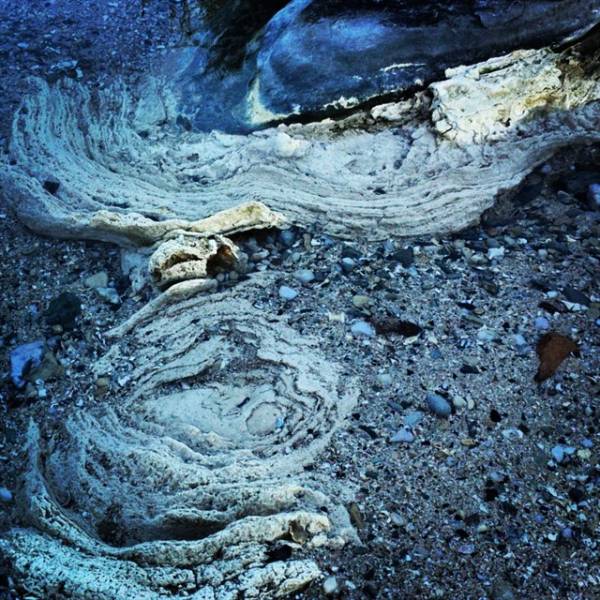 The first extant marine tufa stromatolites along the southern African coast were described in the early 2000s from Cape Morgan on the Wild Coast. Located on a dolerite headland shaped into a wave-cut platform, these stromatolites consist of continuous, extensive laminar growths or discrete accretions bridging gaps between separate boulders. In either case, the formation results in enclosed rock pools capable of trapping carbonate-rich groundwater seeps.

Although other rare, isolated examples of similar formations have been reported to occur from Port Elizabeth to Tofu in Mozambique, the recent discovery of numerous and closely spaced living stromatolites on the coastline south of Port Elizabeth appears to be extraordinary. 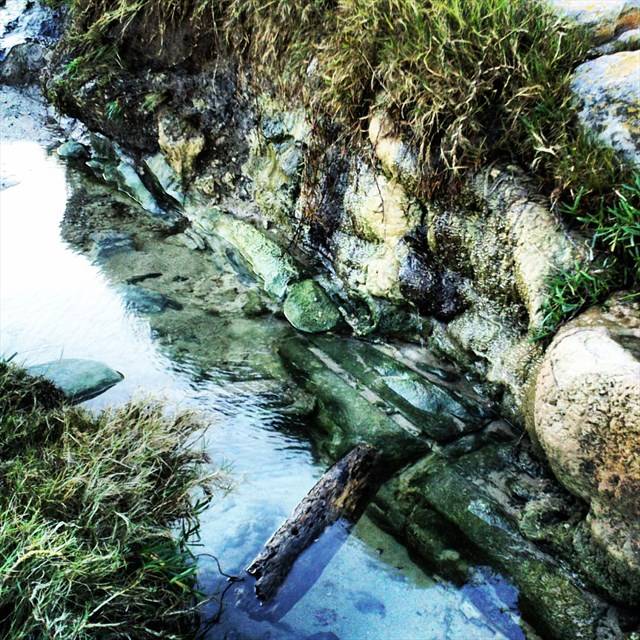 While the Cape Morgan headland includes about 50 stromatolite colonies, each of about 3 m2 on average, the formations mapped so far to the west of Cape Recife include 540 colonies, ranging in cover from < 1 m2 to > 100 m2.

Southern African tufa stromatolites are regarded as unique in their nature, because they typically occur at the interface between freshwater seepage points and the marine penetration. The closest type to those discovered on the south-east coast of South Africa are the tufa deposits recently reported from the south-west coast of Western Australia. Here, however, most tufa formations are associated with inland spring discharges, while the South African types are all upper intertidal to supratidal in position, with strong and regular marine influence.

With few exceptions, metazoan (animal) communities have generally been regarded as incompatible with the very existence of stromatolites. However, a diverse macrofauna community characterises the stromatolite pools of the Eastern Cape, with euryhaline species occurring throughout the system and typical freshwater and marine species alternating each other at pool dominance, or even coexisting in different layers of each pool.

Euryhaline organisms are able to adapt to a wide range of salinities. An example of a euryhaline fish is the molly which can live in fresh water, brackish water, or salt water. A case in point is provided by the true crabs (brachyurans), which exhibit abundances of a typical freshwater species, next to a typical marine intertidal dweller. The two crab species can be found occasionally in the same barrage pool, but at different depths, with the marine species generally under rocks in the deeper parts where the denser saline water sinks. 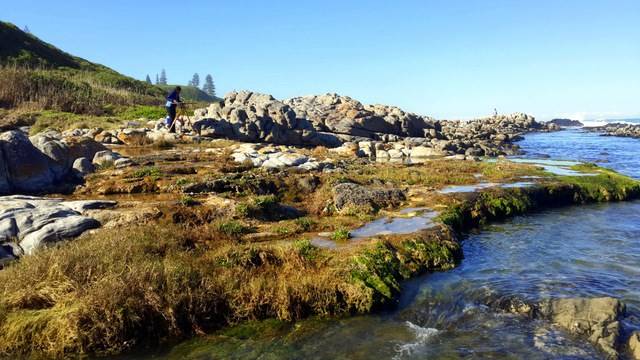 Colonies to the west of Cape Recife include 540 colonies, ranging in cover from less than 1 m2 to greater than 100 m2

Stromatolite pools also appear to be colonised by a unique suite of common fish species, most of which are usually associated with estuaries. It is unknown to what extent these unique habitats serve as a fish nursery. In the fresher pools, there are often frogs and dense aggregations of tadpoles.

A new metazoan species, a tiny prawn-like burrower, has been discovered in the rare stromatolite formations on the Port Elizabeth coast. The discovery of the half-centimetre-long creature was made by a team of scientists led by Nelson Mandela University researchers, Dr Gavin Rishworth and Professor Renzo Perissinotto, and a collaborator from the University of Lodz in Poland, Dr Magdalena Blazewicz.

According to Rishworth, the new species accolade was confirmed in the publication of their paper this week in international journal Marine Biodiversity and the creature had been named Sinelobus stromatoliticus in reference to its unique home. Despite being small and inconspicuous, it plays a pivotal role as a gardener, trimming and consuming excess seaweed to ensure this does not overgrow the light or nutrients necessary for the stromatolite itself.

Previous research had shown that the cyanobacteria were largely responsible for flooding Earth’s atmosphere with oxygen some two billion years ago and making it habitable for the first time.

The new global stromatolite hotspot between Cape Recife, Schoenmakerskop and Seaview was identified in 2012 by Perissinotto and Dr Thomas Bornman of the South African Earth Observation Network.

Besides Sinelobus being a new species, it was also confirmation for the first time that marine animals live among stromatolites, Rishworth said. They use the stromatolites as a miniature refuge to escape predators or extreme temperatures. This is unusual, as in most other ecosystems these organisms would disrupt and destroy the stromatolites while they burrowed and ate their way through it.

The researchers aim now is to study the other stromatolite formations between Port Elizabeth and Storm’s River and on the Wild Coast, and globally, to see if Sinelobus occurred there as well or whether it was restricted to the Port Elizabeth area. The question now was what other new species could be hiding in the stromatolites.