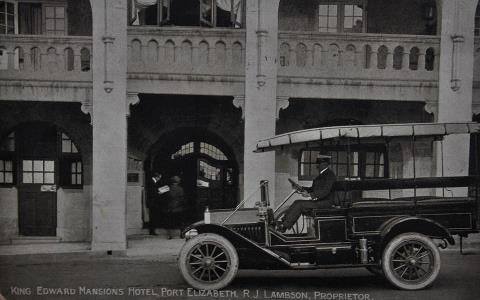 One of the landmark hotels in Port Elizabeth has to be the King Edward Hotel which opened for business on 21st November 1904. Surprisingly it did not start life as an hotel. Designated the King Edward Mansions, it housed medical practitioners in suites. In addition various private tenants rented rooms.

The King Edward Mansions, as it was initially called, was the property of Palace Buildings Ltd. It was designed by the well known local firm of Jones & McWilliams.

The style was described as “Old English” at the time but it is probably more correct to classify it as “Art Nouveau”. The open arcade in the interior is thought to have been a carriage way. The view from it to the east is delightful. It was also one of the first buildings in Port Elizabeth to have a lift, which is still in operation today.

Conversion into a hotel

It only became an hotel in 1911 under R.S. Lambson but it only received a liquor licence in 1920 when Lambson’s licence for the “George” was transferred to the “King Edward”.

An open arcade in the interior is believed to have been a carriageway where horse-drawn vehicles passed through. It was a unique and unusual innovation in that the driver entered on one side of the building and exited the other side. It must have required some skill as it is not that wide. As the age of the horse carriage was over, it is highly unlikely that it was ever much used for this purpose.

Even though the name was amended to “The Edward” in 1961, recent photographs of the revamped hotel show the name as again being “The King Edward.”

The hotel was taken over by a family from the United Arab Emirates circa 2012 and they have undertaken an extensive renovation process.

The Edward Hotel reopens as the King Edward

Apparently the renovation process took four years because it is a historical building. The main areas that have been renovated include the small dining room, bedrooms and the foyer area. They are still busy with minor renovations and touch-ups.

The new owners of the hotel have not been able to make a success of the busy and it is standing vacant. By all accounts, vagrants are in the process of denuding the building.

An interesting story about the hotel is that it is believed to be haunted. It is claimed that an owner of the building was murdered in room 101. People allege that the hotel is haunted and they can see him in the room.