This was one of the glories of old Main Street and many have considered its demolition and that of the Mutual Arcade, two doors up, as the greatest acts of vandalism in the city.

Main picture: The Bank of Africa

Both these buildings and the one in between were designed by architect William Henry Stucke (of Stucke Harrison and Stucke & Bannister) who came here for a time during the Anglo-Boer War. The Mutual Arcade was built in 1898+ under the supervision of Orlando Middleton and opened in 1900. It was demolished in 1958. The Bank of Africa with its terra-cotta façade (Doulton) was opened on 22 June 1903 and demolished for a modern Barclays Bank (Jones & McWilliams) in July 1956. Ironically, First National Bank, the owners, have now left the old city centre altogether and the big building is empty. The green marble columns from the old bank were used by Herbert McWilliams in his Greek Orthodox Church here. 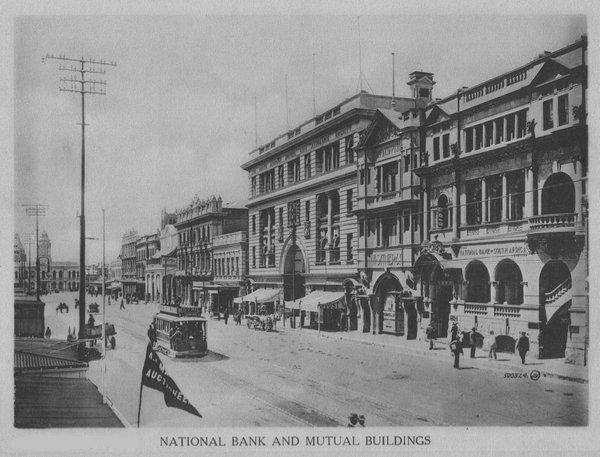 Main Street with Bank of Africa visible on the right

Port Elizabeth of Yore: The Destruction of the Architectural Integrity of the Market Square Precinct