Unlike humans, turning fifty did not imply that Port Elizabeth was approaching middle age. Instead, it was still an age of exuberant growth and limitless possibilities, as it was now the largest port in South Africa, volume-wise. It would take another century for old age, tepid growth and decline to set in.

This description of Port Elizabeth in its teenager years is fascinating and is taken from a thin unnamed booklet entitled “between 1860 and 1870.”

The town of Port Elizabeth contains 15,000 inhabitants and is built on hills sloping downwards to Algoa Bay. The principal business part of town is erected on a narrow slip of land at the foot of these hills, and property in this restricted neighbourhood is exceedingly valuable. Main Street, with its continuations, Queen Street, Princess Street and Adderley Street, contain the principal shops, stores and places of business, while Strand Street, near the sea, now contains rough goods and produce stores, which have replaced squalid dwelling houses and disreputable canteens. 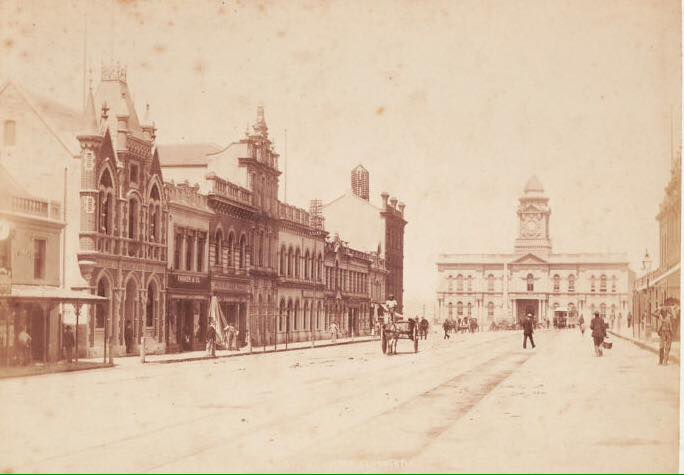 In order to view the town well, let us ask our readers to land with us, in imagination, at the new jetty. We observe that rails have been laid down, and that facilities for landing and shipping cargo are provided. At the foot of Jetty Street, on the right hand side, we notice the Railway Station, which is a handsome double-storied building, with ample accommodation for the public and for officers of the department. On the opposite side of Jetty Street, a little further on, are the magnificent stores of Messrs Blaine & Co, which are constructed of handsome stone and supplied with patent hydraulic lift and every modern convenience. Adjoining these stores, there is steam machinery capable of pressing 300 bales of wool per diem. 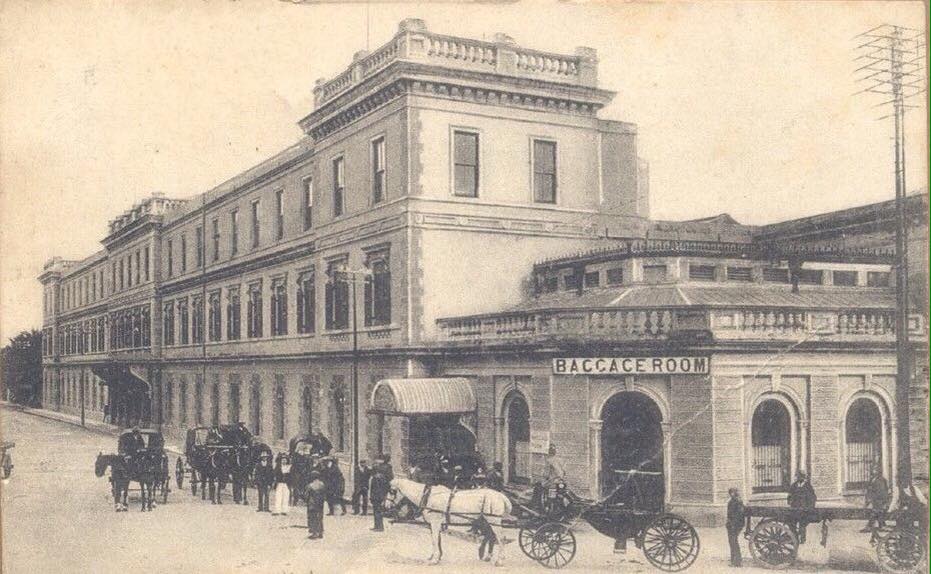 Going up Jetty Street, we see at its junction with Main Street the handsome cut stone building of the London and South African Bank, and standing at its corner, we are opposite the granite obelisk in the centre of Market Square and the Town Hall Buildings. Entering the latter, we find the Library rooms on your left, in which there are upwards of five thousand volumes of books, together with Home and Colonial newspapers. The large Town Hall is tastefully ornamented, and, including the galleries, is capable of containing one thousand people.  As a concert room, it is exceedingly suitable, and the Port Elizabeth Musical Society has been able to render oratorio music there with great advantage. 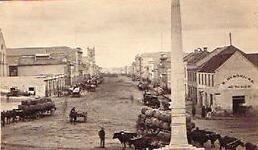 Going down the beach, we cross North Union Street, and having passed large wool stores, arrive at a busy scene. Four boating companies are busily landing and shipping goods by means of large surfboats and gangs of Fingoe labourers. This is a very primitive method, and will no doubt be altered when Sir John Coode’s plan of building a sea wall along the beach and constructing dwarf jetties at right angles to it is completed. 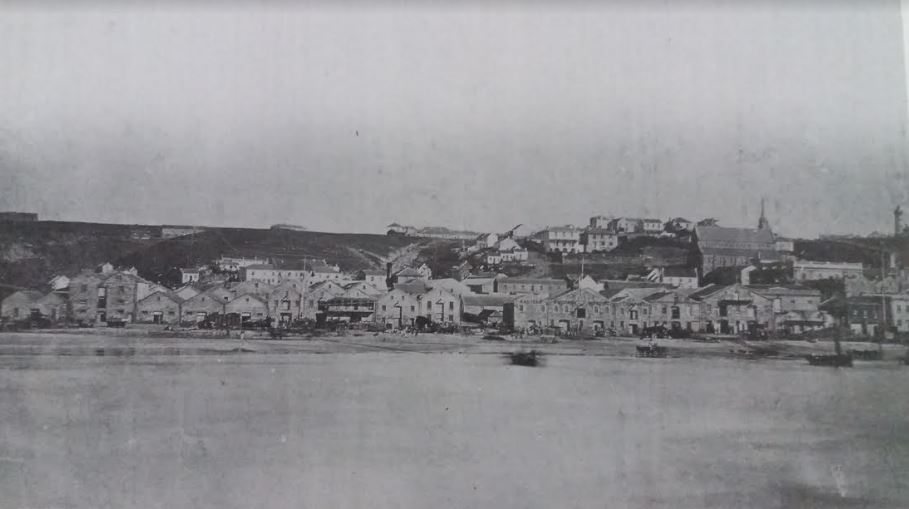 The landing beach circa 1867

On the Grey Institute Hill in Port Elizabeth, there are streets and terraces of elegant dwelling houses. Order has been evoked out of the chaos of miscellaneous buildings, which formerly dotted this site, and now there are regular and handsome streets. The Grey Institute Tower has recently been improved and an excellent public clock has been placed in it. The Park Garden, under the careful management of Mr J. Wilson, is exceedingly well kept, and is an instance of the desert being made to bloom as the rose. 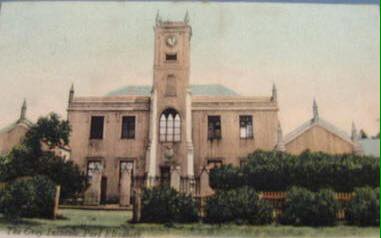 On the Hospital Hill and on the slopes leading down towards the North End, there are a large number of dwelling houses and these healthy localities are favourable places for residence. On the flats at the North End, we find the large new prison, which is a solid stone structure. The Railway Goods Station is necessarily very extensive, and yet will probably be found too small for the immense traffic, which will require to be transacted in it. For the convenience of the residents at the North End, a ticket platform has been erected on the railway. It is in this neighbourhood that the new hall of St. Patrick’s Society has been constructed. This is a very tasteful three-storied building in the Italian style, comprising a large hall and numerous rooms, supplying ample accommodation for the wealthy and numerous benefit societies it is intended to accommodate. When referring to the North End, Prince Alfred’s Park ought not to be omitted. This enclosure is well planted with trees and shrubs, and floriculture is well attended to. 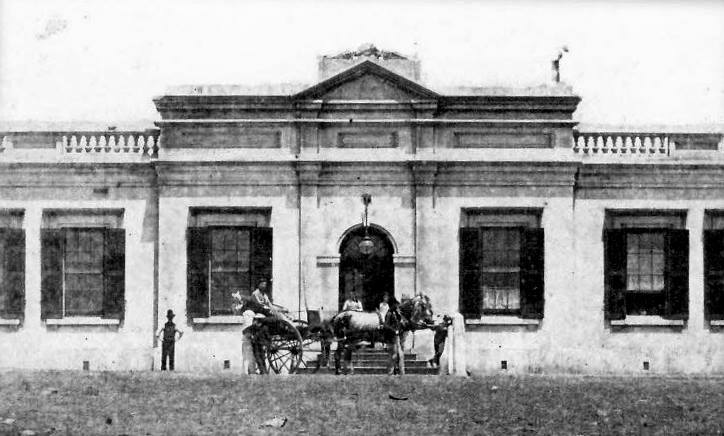 Among the principal buildings to which we have not yet referred, is the Provincial Hospital, admirably situated on a most healthy site, from which a fine view of the bay and shipping can be obtained. This institution is supported by Parliamentary grants, as well as by a land endowment and private subscriptions. More than one thousand sick are treated annually. The Gas Works, at the North End, are comprised of neat, substantial buildings. So great is the consumption of gas now that the shares of the Company have advanced to a premium of fifty per cent. The Wool and Produce Market is a stone building with a corrugated iron roof, which covers an extensive area and where the periodical sales of wool, hides, skins, ostrich feathers, karosses etc take place. There are various steam and pressing establishments in Port Elizabeth, and on the banks of the Baaken’s River. 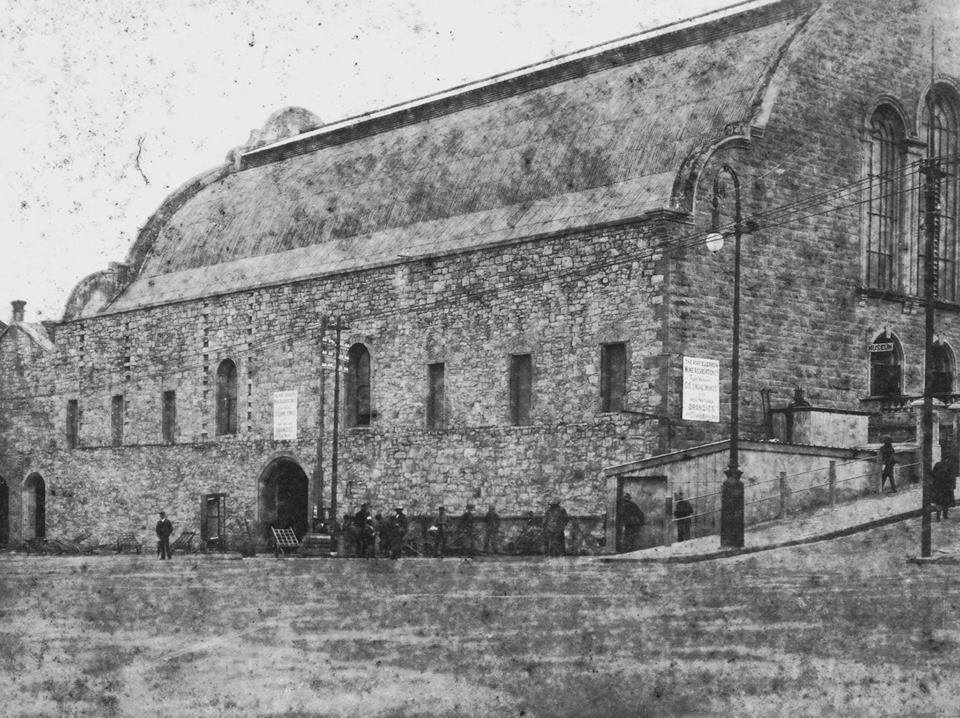 The churches of Port Elizabeth are numerous and generally tastefully constructed buildings. St Mary’s is a commodious edifice close to Main Street and Market Square (The Colonial Chaplain officiates there). Trinity Church on the Hill is a tasteful ecclesiastical structure, and this building, with St Paul’s (a neat stone structure at the North End), and a chapel at the South End, comprise the ecclesiastical edifices belonging to the Church of England. 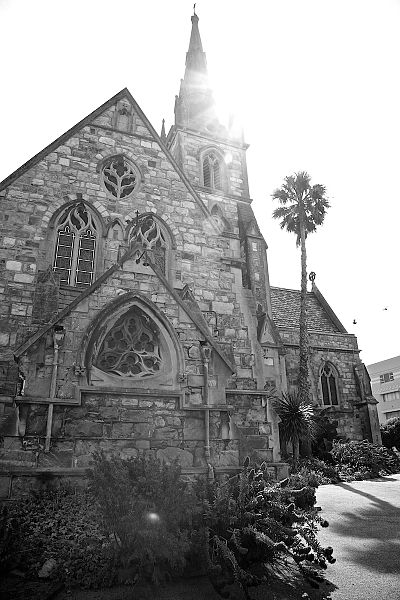 An additional church, St Peter’s, at the South End, is now in the course of construction. St Augustine’s Roman Catholic Church, Prospect Hill, is an elegant plain Gothic building divided into a nave separated by pillars from two lateral aisles. The windows are all of stained glass, three altars of marble and Caen stone, a handsome carved stone pulpit and a magnificent organ, which cost upwards of £1,500, and forms a memorial to the late highly respected pastor of the Church, the very Reverend Dr. Murphy. 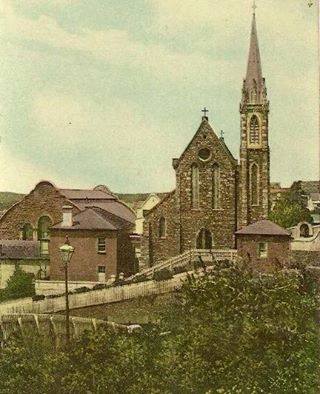 The Independent Church in Main Street is a great ornament to that street, and comprises a handsome tower with town clock, and a large elegant building. The Scottish Presbyterian Church on the Hill is deservedly admired as a specimen of neat and tasteful Church architecture, and the tower and spire are so lofty and on such an elevated site that they can be seem at a distance of many miles. The Wesleyan Church near the foot of Russell Road is a handsome commodious structure, built in the gothic style, and comprises large schoolrooms on the ground floor. An additional Wesleyan Chapel is now in the course of construction in North End. There is also a Baptist Chapel in Port Elizabeth, which has been very much enlarged since first erected. 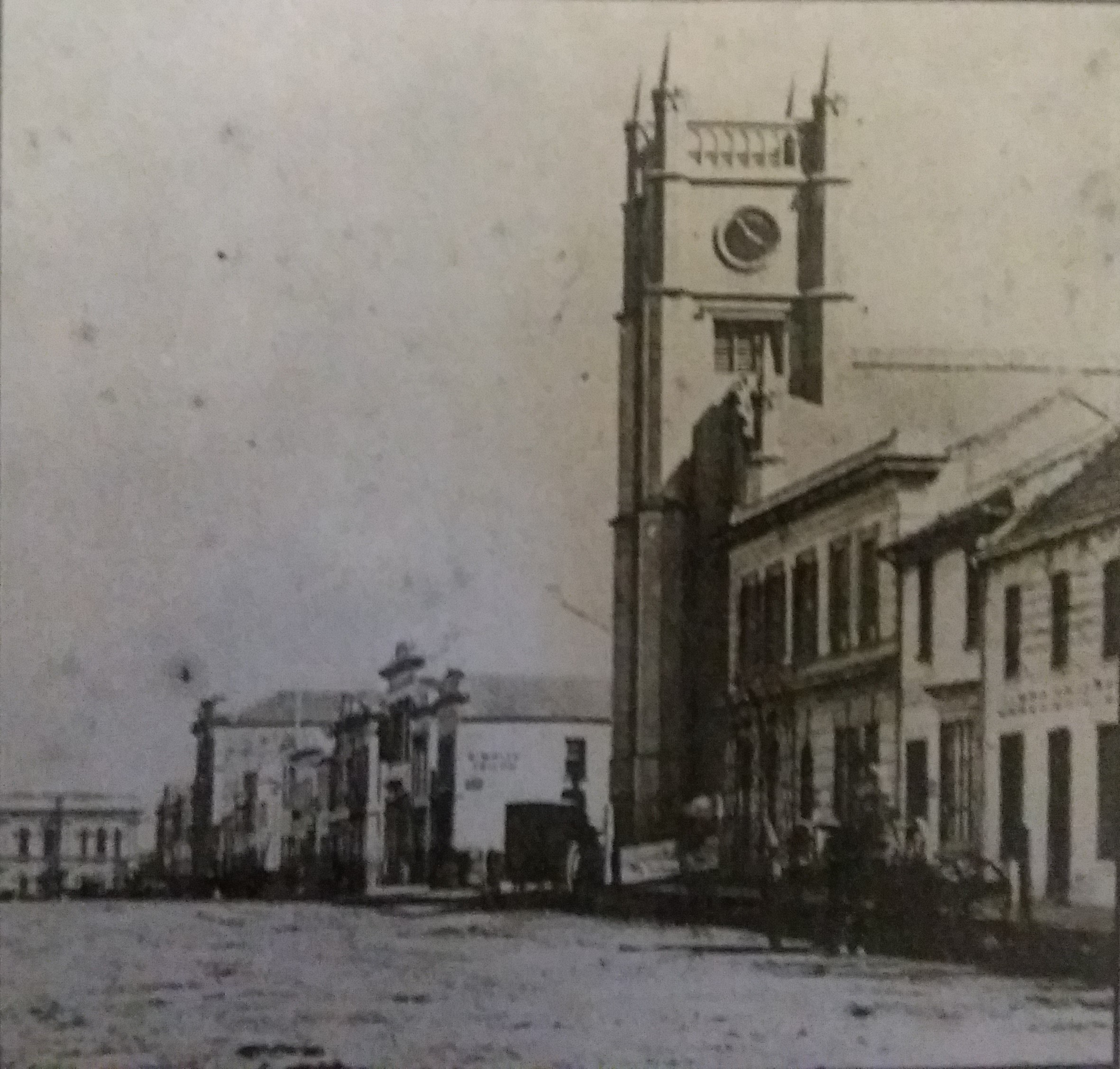 A new Native Chapel as a memorial to the respected Rev. Mr. Edwards is in the course of construction. There are four Churches for natives in Port Elizabeth. There are two Malay Mosques, one of which in Strand Street is ornamented by a handsome minaret from the gallery near the top of which the Mohommedan Priest’s summons to prayer is shouted. The Jewish synagogue is situated at the top of White’s Road. The edifice is shortly to be greatly enlarged and improved. 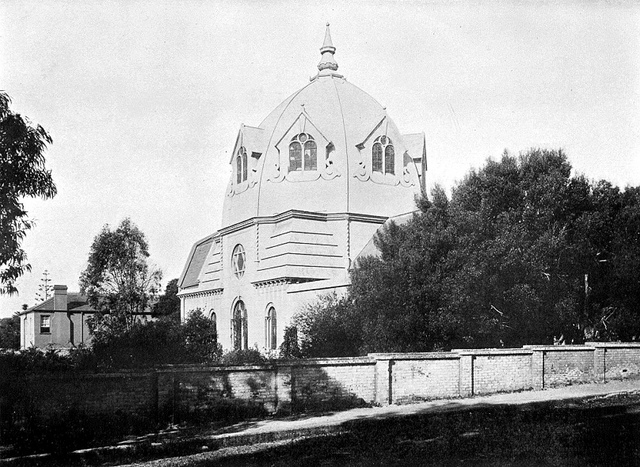 The Harbour lighthouse situated on the Grey Institute Hill, is chiefly used to enable vessels to anchor in the Bay at night. From this station, the shipping can make their wants known, or communicate with their agents, during stormy weather, when landing is impossible. An ornamental cottage for the keeper adjoins, and forms, together with the Donkin Obelisk, a very distinctive group on the summit of the Hill. The obelisk was erected in 1820 by Sir Rufane Donkin, in memory of his wife, Lady Elizabeth, who had previously died in India. On a plaque, it is stated that “the town below” is named after this estimable woman. At the Hill Lighthouse, a time ball falls every day at 1pm Cape Town time’ 1:33 Port Elizabeth time. A pulviometer and other instruments enable the light keeper to male meteorological observations. The Customs House is a fine public office, but the other Government buildings, including the Court House, are scarcely worthy of mention, but we are glad to state that a vote of £10,000 was passed by Parliament for the erection of suitable Public Offices in Port Elizabeth. The site will probably be the present Court House premises in Market Square. The new edifice will provide accommodation for the Post and Telegraph offices, as well as the Court and the Department of the Civil Commissioner and Resident Magistrate. 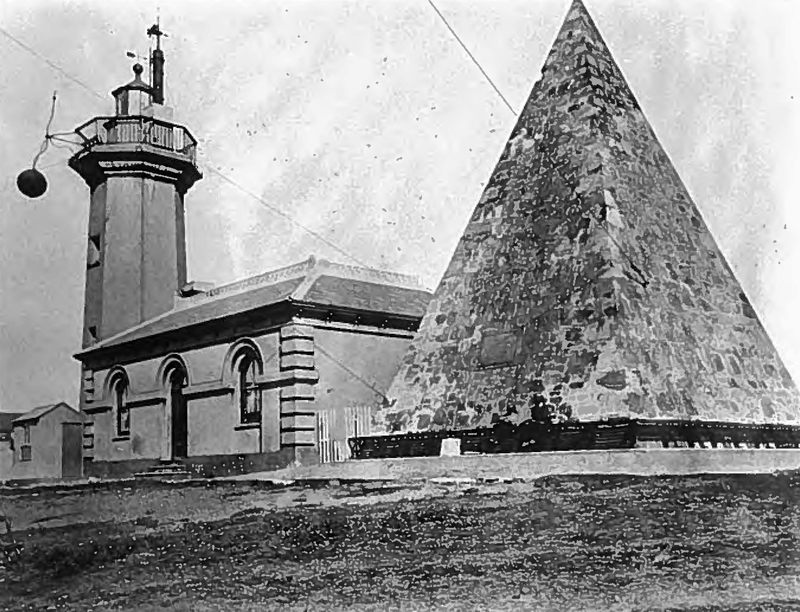 Among the handsome edifices, which have recently been erected in Port Elizabeth, one of the most conspicuous is the Head Office of the Standard Bank in South Africa, which forms one of the principal ornaments in Main Street. The interior is exceedingly tasteful and commodious. 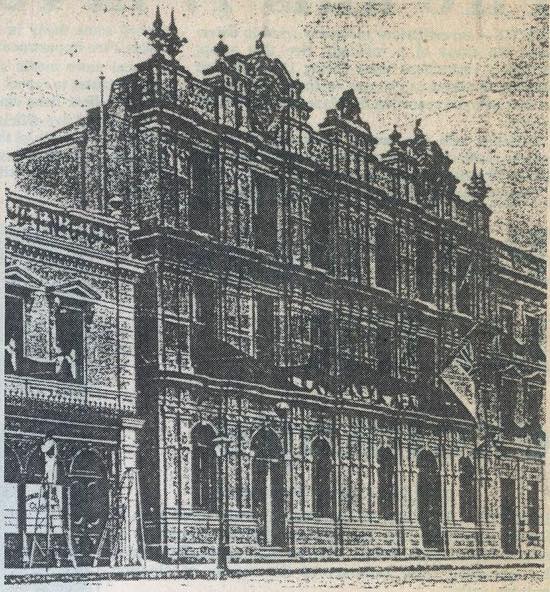 The town of Port Elizabeth has increased very much within the past five years, and progress, both steady and rapid, is still going on. Houses are being erected in all directions but the demand continues even greater than the supply. As the chief commercial port and centre of business in South Africa, it is only natural that its progress should be rapid, and this forms a reflex  and criterion for the general advance going on in the country. Railways are already beginning to facilitate trade operations, and it may be hoped that they will be so rapidly extended as to materially assist in quickly developing the great resources of South Africa. Railways are now open on the North Eastern line to Sandflats, 65 miles from Port Elizabeth, and on the Northern line to Uitenhage, 20 miles from Port Elizabeth.