A week ago my blog “Landing without an Elevator or Rudder” showcased a South African example of a miraculous escape when an airforce Dakota was almost downed by a Soviet SAM-7 anti-aircraft missile. This week’s example relates to a US Airforce B-17 Bomber which had accidently been rammed by a German fighter over Tunis harbour. To say that their air crews changes of survival were negligible is an understatement. Yet they did.

This is their story.

Main picture: A crippled B-17

Potted History of the B-17

The B17 was the mainstay of the USA Army Air Force as it was called during WW2. Due to rapid changes in technology, any aircraft such as the B-17 which first flew in 1935 was reaching obsolescence at the commencement of the war. Nonetheless a total of 12 731 were built before production ceased. Its replacement, the B-29, was a quantum leap ahead of B-17 but it never saw serve in the European theatre. 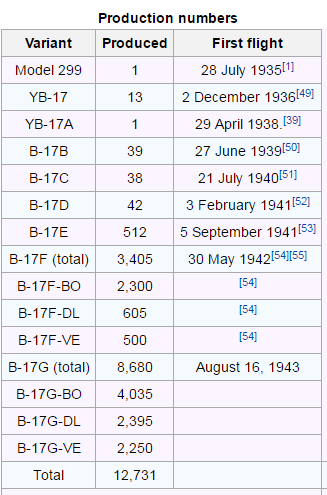 A number of B-17s were even used by the Axis forces. These were acquired not through either commercial or illegal channels, but as a result of their crew’s involuntary landings arising from mechanical or air combat damage. Some were used by the Germans to imitate American planes in order to infiltrate the bomber streams. Exceptions notwithstanding, most were used for transport duties and fighter pilot training purposes. The Japanese on the other hand declared that the B17 was obsolete. Hence they elected not to use it in any capacity.

The severely damaged B-17, “All-American” continues to fly after an attacking Bf 109 fighter collided with the aircraft. The B-17 flew home and landed in this condition without major injuries to any of the crew members.

After a mid-air collision on February 1, 1943, between a B-17 and a German fighter over the Tunis dock area, became the subject of one of the most famous photographs of WW II.  An enemy fighter attacking a 97th Bomb Group formation went out of control, probably with a wounded pilot, then continued its crashing descent into the rear of the fuselage of a Flying Fortress named “All American”, piloted by Lt. Kendrick R. Bragg, of the 414th Bomb Squadron. 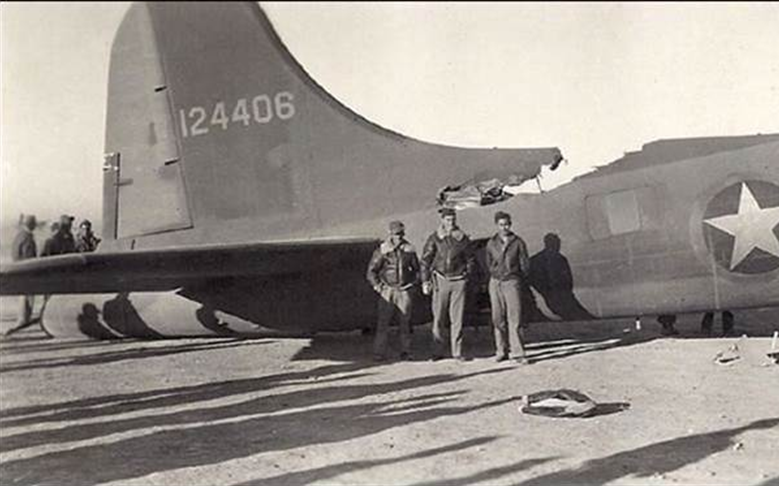 When it struck, the fighter broke apart, but left some pieces in the B-17.  The left horizontal stabilizer of the Fortress and left elevator were completely torn away.  The two right engines were out and one on the left had a serious oil pump leak.

The vertical fin and the rudder had been damaged, the fuselage had been cut almost completely through connected only at two small parts of the frame, and the radios, electrical and oxygen systems were damaged.There was also a hole in the top that was over 16-feet long and 4 feet wide at its widest; the split in the fuselage went all the way to the top gunner’s turret.

Although the tail actually bounced and swayed in the wind and twisted when the plane turned and all the control cables were severed, except one single elevator cable still worked, and the aircraft miraculously still flew!

The tail gunner was trapped because there was no floor connecting the tail to the rest of the plane. The waist and tail gunners used parts of the German fighter and their own parachute harnesses in an attempt to keep the tail from ripping off and the two sides of the fuselage from splitting apart. 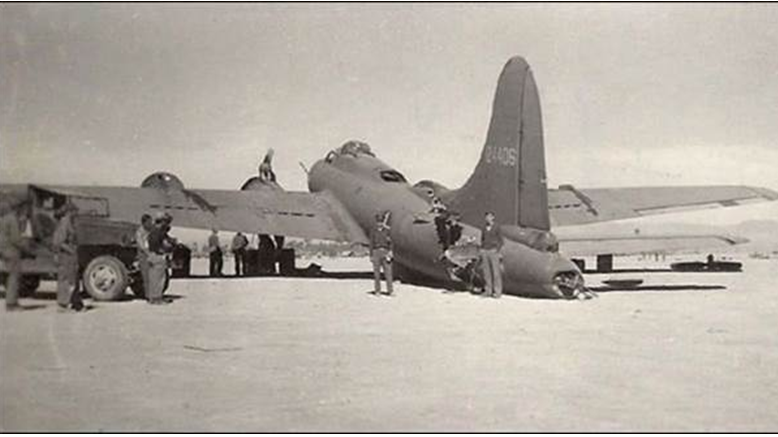 While the crew was trying to keep the bomber from coming apart, the pilot continued on his bomb run and released his bombs over the target. When the bomb bay doors were opened, the wind turbulence was so great that it blew one of the waist gunners into the broken tail section.

It took several minutes and four crew members to pass him ropes from parachutes and haul him back into the forward part of the plane. When they tried to do the same for the tail gunner, the tail began flapping so hard that it began to break off.

The weight of the gunner was adding some stability to the tail section, so he went back to his position. The turn back toward England had to be very slow to keep the tail from twisting off.
They actually covered almost 70 miles to make the turn home.  The bomber was so badly damaged that it was losing altitude and speed and was soon alone in the sky. 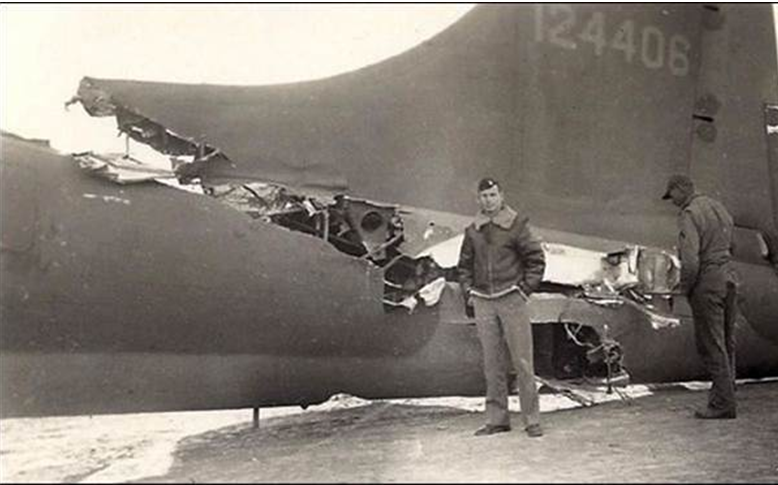 For a brief time, two more Me-109 German fighters attacked the All American.

Despite the extensive damage, all of the machine gunners were able to respond to these attacks and soon drove off the fighters. The two waist gunners stood up with their heads sticking out through the hole in the top of the fuselage to aim and fire their machine guns.

The tail gunner had to shoot in short bursts because the recoil was actually causing the plane to turn. Allied P-51 fighters intercepted the All American as it crossed over the Channel and took one of the pictures shown. They also radioed to the base describing that the appendage was waving like a fish tail and that the plane would not make it and to send out boats to rescue the crew when they bailed out.

The fighters stayed with the Fortress, taking hand signals from Lt. Bragg and relaying them to the base. Lt. Bragg signalled that 5 parachutes and the spare had been “used” 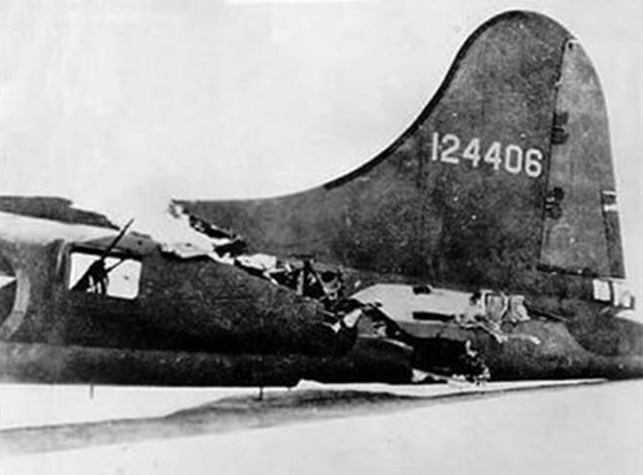 So five of the crew could not bail out.

He made the decision that if they could not bail out safely, then he would stay with the plane to land it. Two and a half hours after being hit, the aircraft made its final turn to line up with the runway while it was still over 40 miles away.

It descended into an emergency landing and a normal roll-out on its landing gear. When the ambulance pulled alongside, it was waved off because not a single member of the crew had been injured. No one could believe that the aircraft could still fly in such a condition. The Fortress sat placidly until the crew all exited through the door in the fuselage and the tail gunner had climbed down a ladder, at which time the entire rear section of the aircraft collapsed. 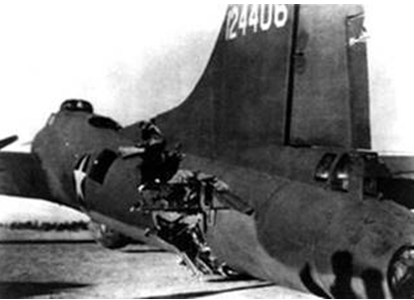 This old bird had done its job and brought the entire crew home uninjured.

UNFORTUNATELY THIS STORY IS A COMPLETE HOAX – well not completely

The “All American” was actually based near Biskra, Algeria, a much more reasonable +/- 300 miles from Tunis. On the fateful day in question, the All American was part of a formation of bombers attacking the German-controlled seaport. Braving heavy flak and German fighters on the way in, the “All American” and her crew managed to drop their bombs and were on their way back to base when the German fighter planes began attacking again, pursuing them to the fighters’ maximum return range, when the attacks ended. However, two more Messerschmitts appeared and came in for the attack. 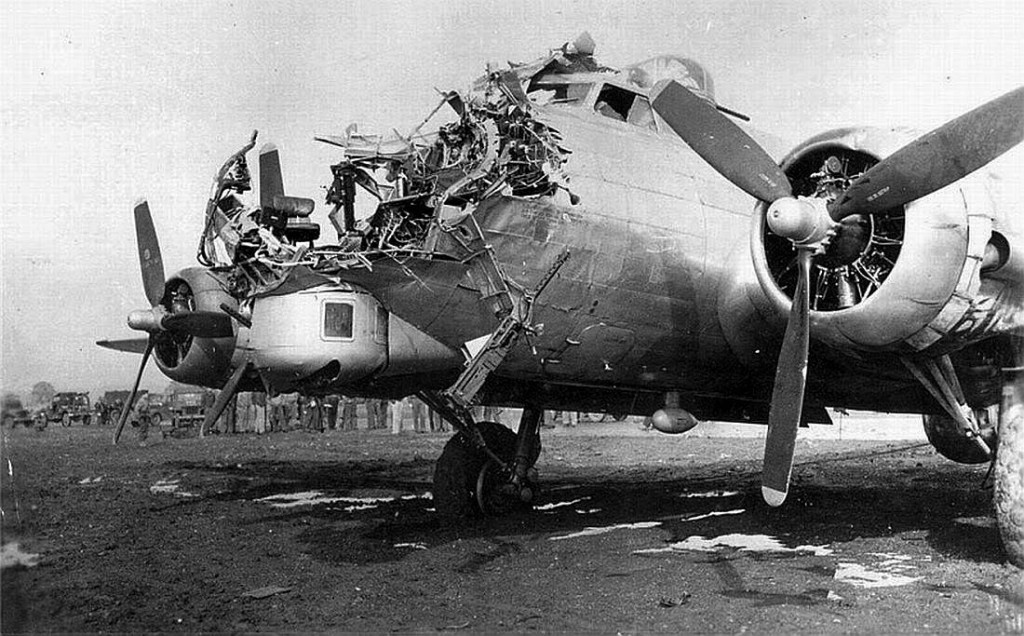 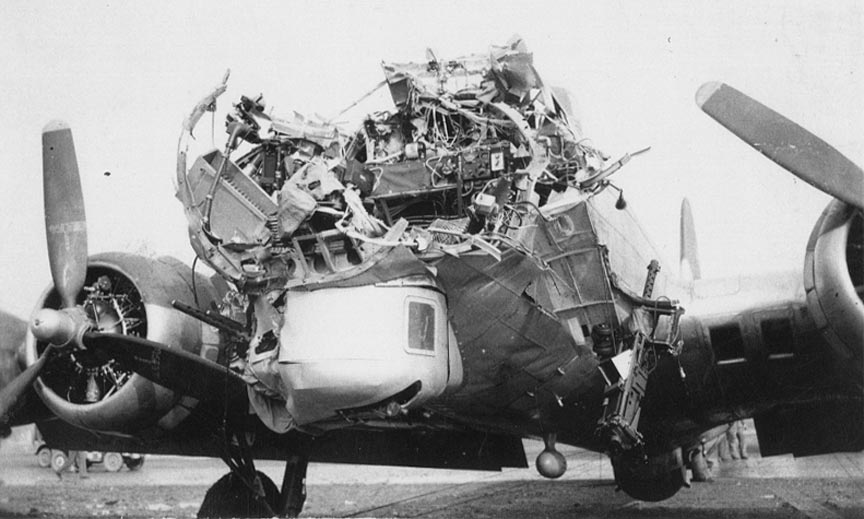 The fighter passed over ‘All American,” to say with inches to spare would be inaccurate as the plane tore a significant hole in the rear of the fuselage and removed the left horizontal stabilizer. The remaining parts of the tail section, the vertical and right stabilizer seemed like they could shake loose at any moment. Miraculously, none of the B-17′s crew were injured and the men all donned their parachutes, ready to abandon the plane should the tail break off.

The other crews in the formation, seeing that the B-17 was crippled, but remaining aloft, slowed to a speed the injured bird could maintain and formed a formation around her until they were out from enemy territory. Once the formation was outside of the maximum range for the German fighter planes, the rest of the formation went on ahead and “All American” limped on alone. The Flying Fortress landed safely, though without her tail wheel which unsurprisingly was inoperative. 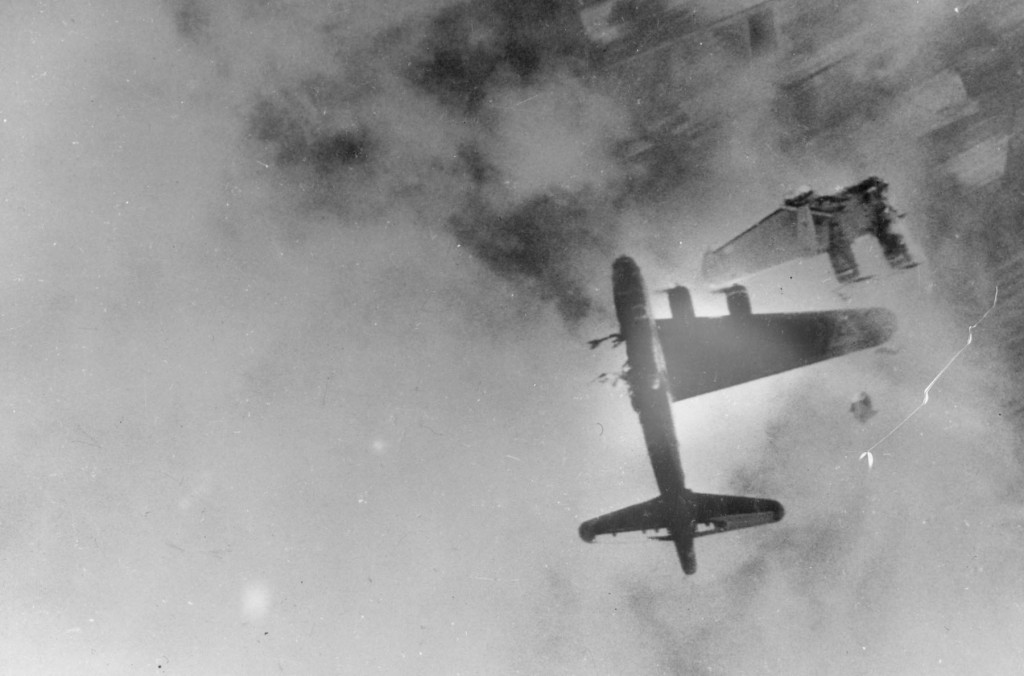 This Boeing B-17F had its left wing blown off by an Me-262 over Crantenburg, Germany. (U.S. Air Force photo)

As one would imagine making it safely to the ground was an emotional experience for both the flight and ground crews, a testament to the bravery of her crew, her compatriots and the legendary robustness of the Boeing B-17, that stands quite well all on its own without the additional fantastical embellishments.

This is the problem with some of the emails that are circulating.

If you have any suspicions as it to email’s veracity, Google www.snopes.com.