As a result of the poor state of the country roads, a trip by ox wagon to Graham’s Town – a distance of only 160 kms – would take eight days. The term road was a euphemism for a track through the bush, which through perpetual usage, had created a passage conforming to the contours, angle and levelness of the ground. No attempt had been made to remove boulders on the route or fill in depressions. Instead the road would skirt around such obstacles.

What roads were there and what was being done to address this issue?

Main picture:  Typical condition of the rural main roads in the 1860s

Condition of the Roads

Without question, there was a demand for good quality roads connecting Port Elizabeth with the hinterland not only for commercial purposes but also for military considerations as there was an ever-present threat of Xhosa invasion. The conundrum was one of cost. The solution by the Colonial Government was to create a series of Divisional Councils whose major function would be control the roads stretching from the Municipal boundary to the limits of the Division. This proposal was accepted, and the Port Elizabeth Divisional Council was established in 1856.  Nonetheless, more to the point, how would this statutory authority function without an independent revenue base? 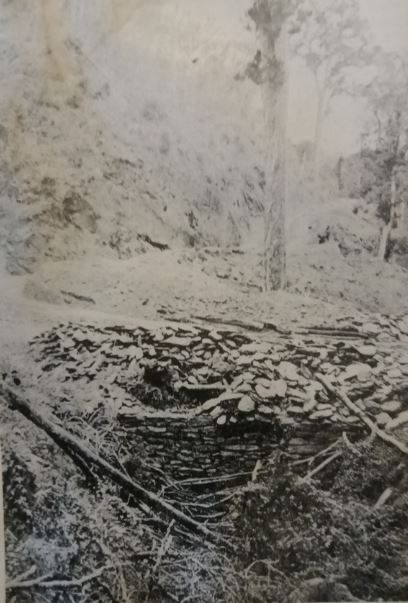 The original settlers, accustomed to the well-built, compact wagons of England, made for relatively smooth roads and flat countryside, marvelled at the manner in which these large, loosely-constructed wagons that bent and gave as they moved through the rough land, pulled by spans of long-horned oxen, negotiated this uneven track with relative ease. Despite this, without question, even these wagons did not protect the occupants of the wagons from jolting and jarring. It was insidious and by the day’s end, after only having completed 20kms, they were exhausted.

Responsibility of the Divisional Council

Meanwhile in 1856, Port Elizabeth had not yet attained the status of a Municipality. The Board of Commissioners and Wardmasters were responsible for the upkeep of the streets and roadways within the limits of the town. Yet, with few exceptions, they performed their tasks admirably given their paucity of resources.

As a result of the PEDC’s establishment, for the first time there was an authority for the maintenance and upkeep of these roadways, of which the most important, by a long shot, were the three main roads or lines of roads as they were referred to then: Grahamstown Road, Uitenhage Road and Cape Road. Scattered between these main roads, were a sprinkling of farmsteads with nothing more than wagon tracks connecting them to one of these main roads.

In wet weather, these roads were rendered impassable as they were churned into masses of slippery, glutinous mud and axle deep potholes whilst in the dry summer months, the occupants of the wagons endured clouds of suffocating dust. At worst, the kurweyers – as they were called – were obliged to offload their wagons when they fell into mudholes and stuck fast.

What had the government done to make these primary lines of communication into respectable highways? In a word, very little. Some might say that they had done nothing but that was too harsh. They had marked out the line of the road, thrown a few stones over the worst part of the track and occasionally cut a few feet of an embankment but, for the most part, nothing had indeed been done.

A daunting task lay ahead of infant Councils, yet they tackled it with zeal and determination though their knowledge of roadbuilding amounted to precisely nothing. More disconcerting was the lack of funds to undertake the task at hand. To this end, a tax amounting to a paltry ½d in the £ was charged but the small population only tardily and reluctantly paid. In addition, they employed every trick in the book, legal or otherwise, not to do so. 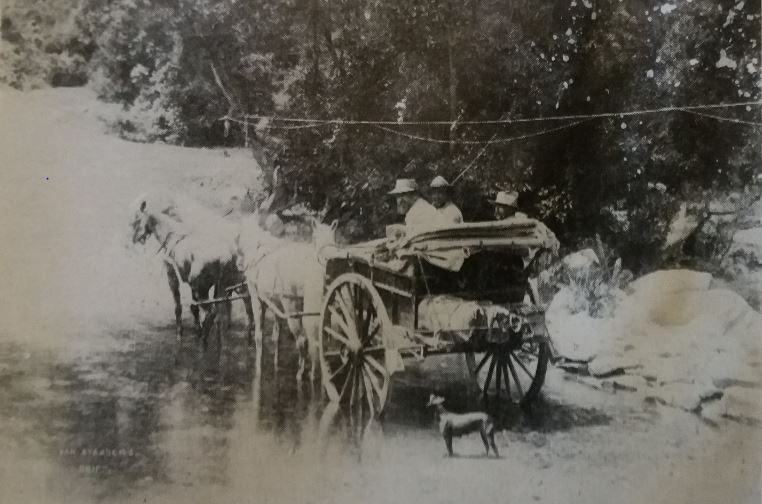 The first road party set up, comprised four white labourers equipped with picks and shovels, two stone-breaking hammers, a wheelbarrow, one cart and a mule, together with a few tins of safety gunpowder. Road building was not for the faint hearted. It was tedious, back breaking work with little reward. In addition to their remuneration, they were provided with perks such as accommodation – a tent – and meals which were of dubious quality as the contractors often cut corners in the quality thereof.

The work did not comprise building a road of stone or tar. Rather it consisted of patching up the worst part of the road, filling in potholes and removing rocks, boulders and other obstacles. Materials used for the repair of the road were not supplied but were purloined from the nearby properties. A constant bone of contention was the digging of holes on the edge of the road in order to fill in holes on the road surface. These were a menace as travellers on horseback could accidentally step into them at night or during inclement weather. Matthew Berry, the owner of Deal Party Farm, complained vociferously that the road party had sunk twenty-five gravel pits within one mile’s walk along his property and threatened a law suit unless there was recompense. 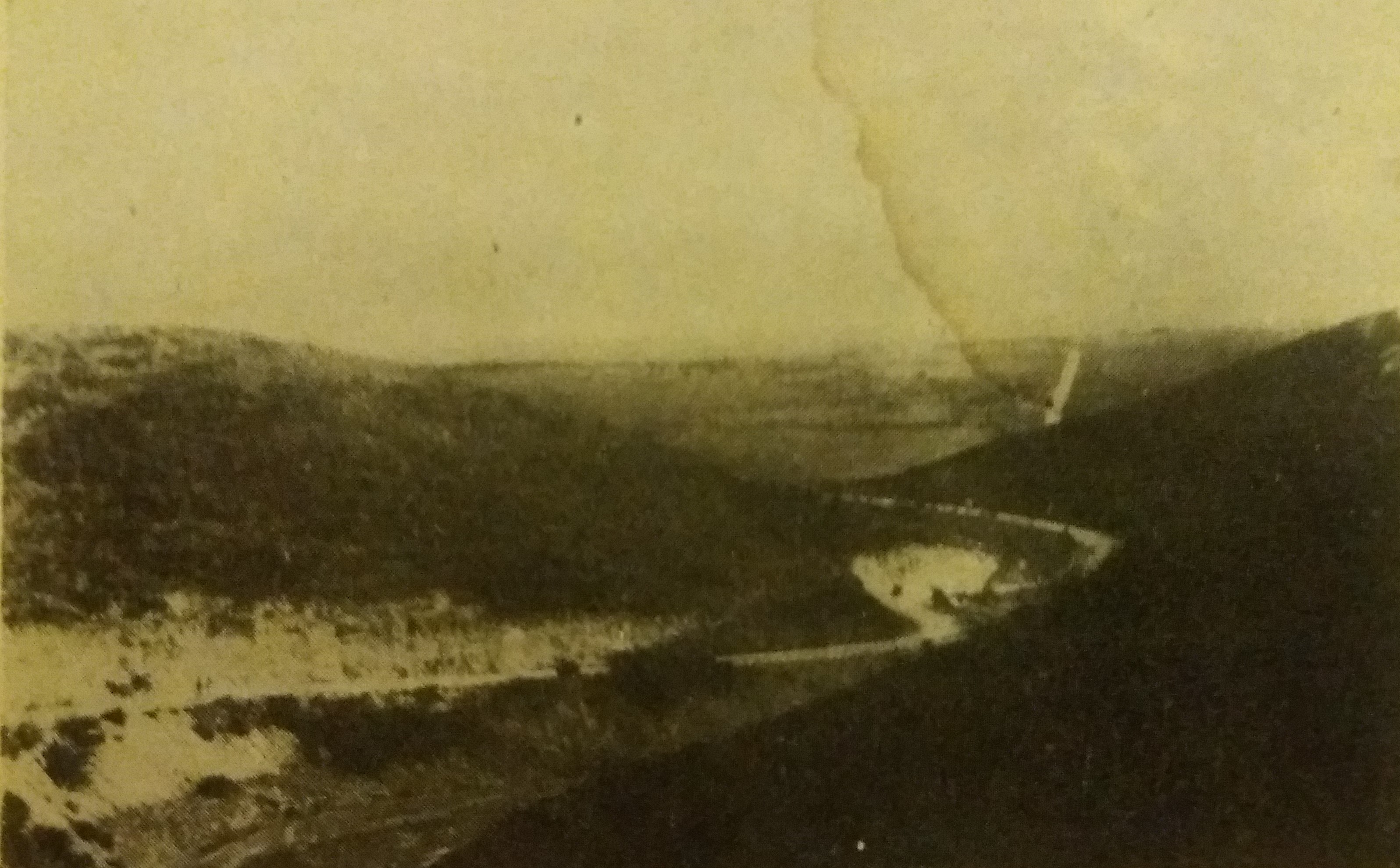 When one road had been repaired, the gang was shifted to another road. The road selected for the road party’s attention depended upon the number of complaints received from travellers and farmers. One wonders how much repair work was performed in a month as the all the work was performed manually. Not only that but they were also the subsidiary roads to repair such as the road through the valley to Walmer without considering the roads such as those to Kragga Kamma, Buffelsfontein, Bushy Park, Frames’ Drift and Seaview.

It was the responsibility of the Councillors to inspect the work, issue orders and pay the men in the field. This duty was performed without complaint in all weathers. Of the keenest was John Miller who in March 1861 reported that he had put “four labourers on the old Walmer Road and was happy to state that they had made considerable progress”. Furthermore, he had purchased some more picks and shovels.

He added that as the tents had proved to be inadequate against the rain and several tents having burnt down, he had arranged with a certain Mr Jones to rent a wooden hut at 30s per month. Later a few galvanised iron sheds were also purchased whilst the overseer, Mr Buddenrock, acquired a house for himself along Uitenhage Road. One can only assume that the wooden or galvanised iron huts were only relocated periodically and not every night. On the other hand, perhaps the rate of progress was so glacial that a small stretch of road could take a week or two to repair.  Yet none of this can explain what Mr Buddenrock did, unless one assumes that he only used his house over weekends or only once per month. 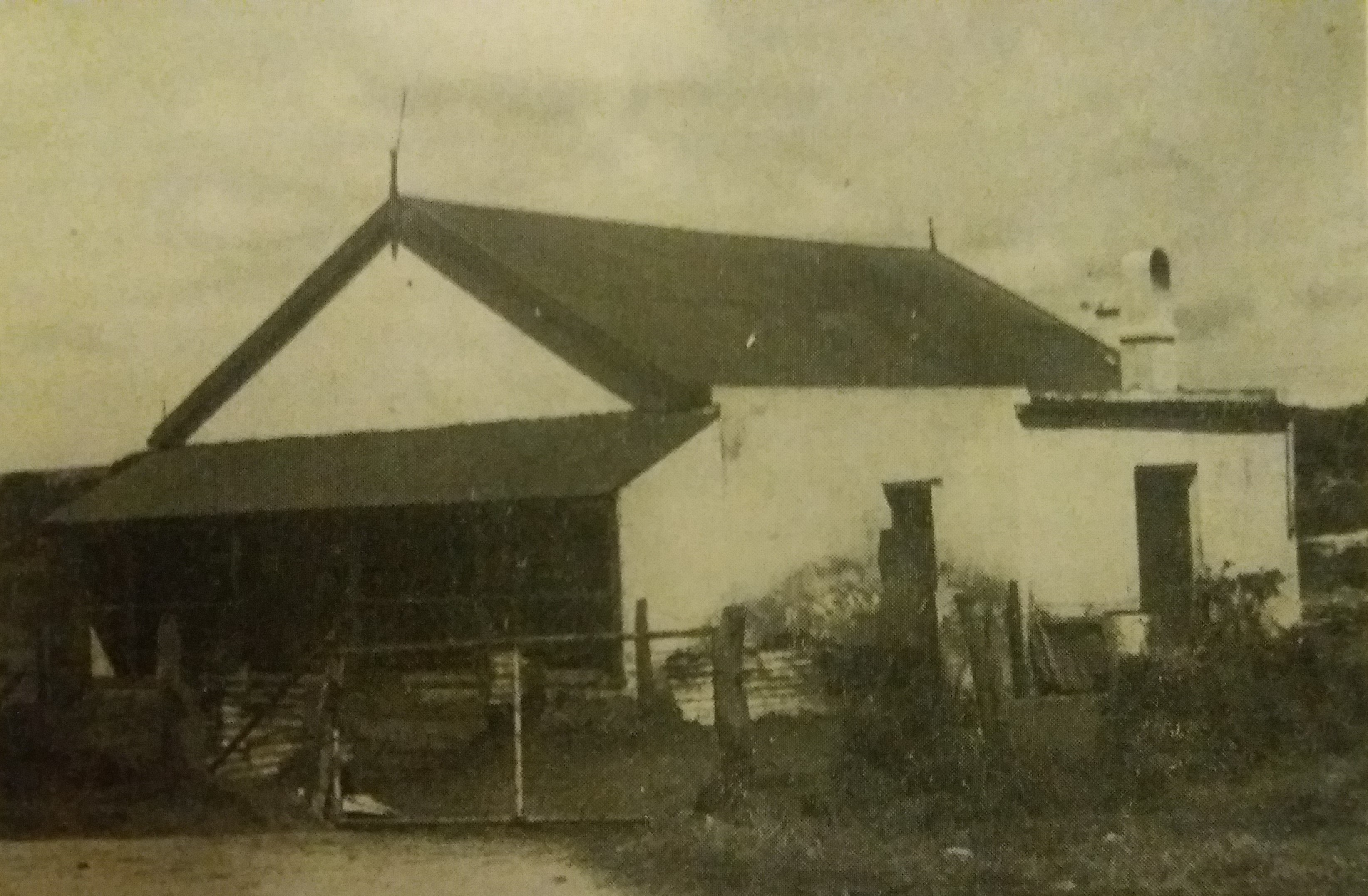 Outspan House built by JJ Berry in 1882 as an Inn for travellers. It was situated about a mile from the Rawson Bridge, halfway between Zwartkops and Deal Party Estate

To provide some idea of the value of this house, it may be gauged from the fact that he sold it to his successor, Mr F. Doyle, who in turn offered “the house and kitchen” to the Divisional Council for £5. After further negotiation, Doyle accepted the Council’s final offer of £2. In other words, the house must have been less than Spartan, perhaps more akin to a latter day pondokkie.

The supply of the rations to the men was put out for tender every year, the price ranging from 6d to 1s per capita. For many years, the winning tender was awarded to a William Bowerman, who later owned a hotel in Swartkops. In due course, Bowerman’s widow took over the contract until eventually the overseers complained that the food was unfit for human consumption. In her stead, the contract was given to Matthew Berry, owner of the Outspan Inn on the Fishwater Flats at Zwartkops. One wonders what form these rations took as fresh meat was out of the question without refrigeration facilities. 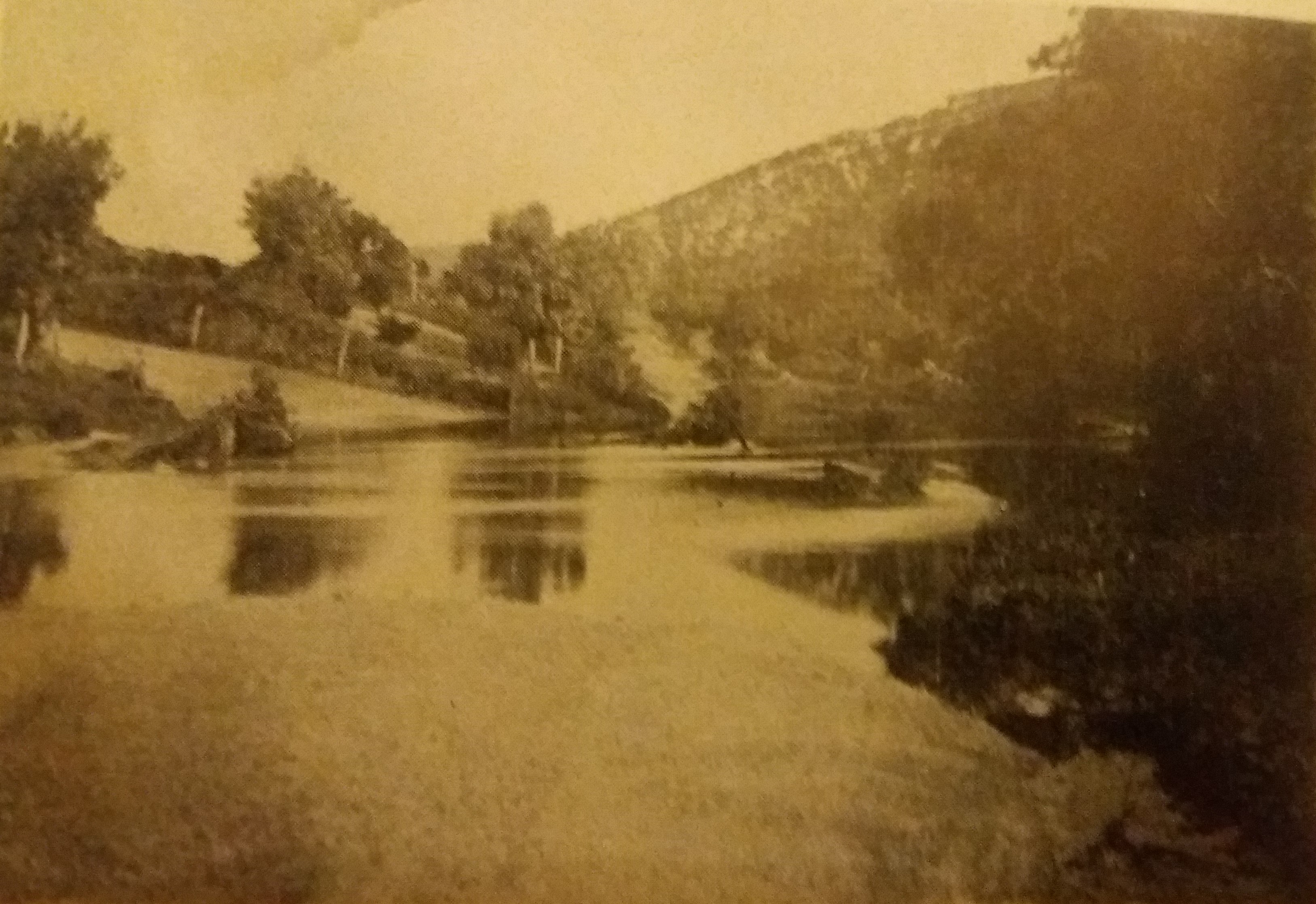 Valley Road when the drift is under water

Tenders were invited from private parties on an annual basis to undertake the repair and upkeep of the Council’s roads. Many of these tenderers did not possess the slightest knowledge of the subject of road maintenance but tendered anyway. To provide a sense of the variability in the quotes, the following quotes were received for the road to Bethelsdorp from the Municipal Boundary:

Matthew Berry of Zwartkops was somebody known to push the envelope as regards tenders. He once submitted an unsolicited tender in which he offered to maintain the roads of Uitenhage, Zwartkops, Kragga Kamma and Buffelsfontein for a period of five years for a sum of £2,400 payable quarterly with the option of renewal. Apart from the cash, he requested that he take over the Council’s equipment consisting of four carts and harnesses, eight mules, all tools and the workmen’s huts stationed along the various roads. Suffice to state, that he never was awarded the tender. 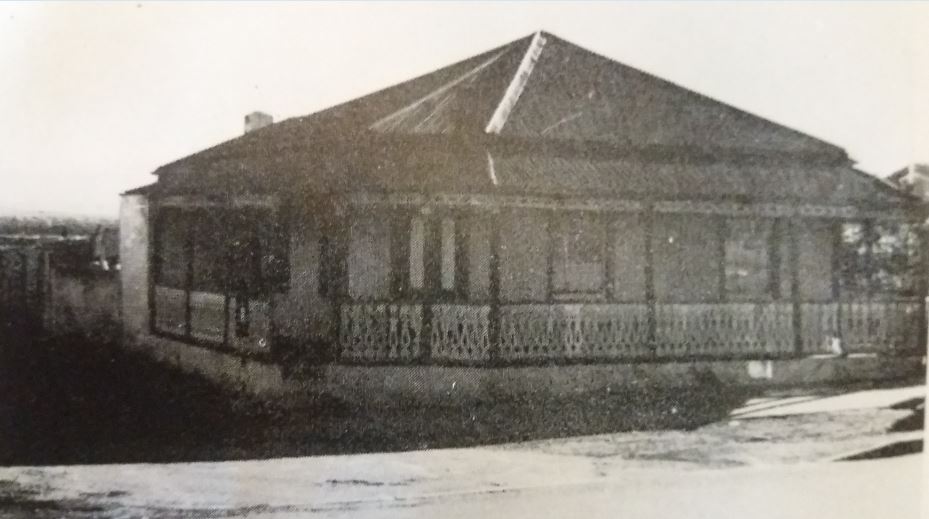 The PEDC struck it lucky when John Campbell was appointed as Chairman. As Resident Magistrate, Campbell exercised control over the jail with its abundant supply of cheap labour. By agreeing to provide twenty prisoners together with a constable as a road party, Campbell – to mix metaphors – solved two problems with one stone: the overcrowded jail and the Council’s tortoise-like progress in repairing the various “lines of roads”.  All that the Council was obliged to provide was the rations. A win-win situation.

Like all arrangements, the devil is in the details. The scheme worked well for a while until it was discovered that that too much time was wasted transporting the prisoners to and fro as they had to be back in jail by a specified time. To alleviate this problem, an application was made to the Government to establish a permanent Convict Station at Zwartkops. This was expeditiously granted on condition that the Council defray all costs connected with its upkeep. Then came more fine print in the form of regulations which prohibited a Convict being located more than seven miles from town unless the Resident Magistrate undertook to visit it regularly. In this case, he was to be supplied with extra forage for his horse or alternatively 3s in lieu thereof.

Accordingly, in 1867, a permanent Convict Station was constructed in Zwartkops complete with barred windows and a tiny house for the overseer and his family. This building could accommodate twenty convicts including sailors of passing ships. For many years, the overseer was W.J. Girven. The ubiquitous Matthew Berry of Beaconsfield Manor which was conveniently close by, was responsible for the supply of Station’s daily rations. At 1s per head, these comprised 1lb meat free from large bones, 1lb bread, 2 oz rice with salt and vegetables for soup. 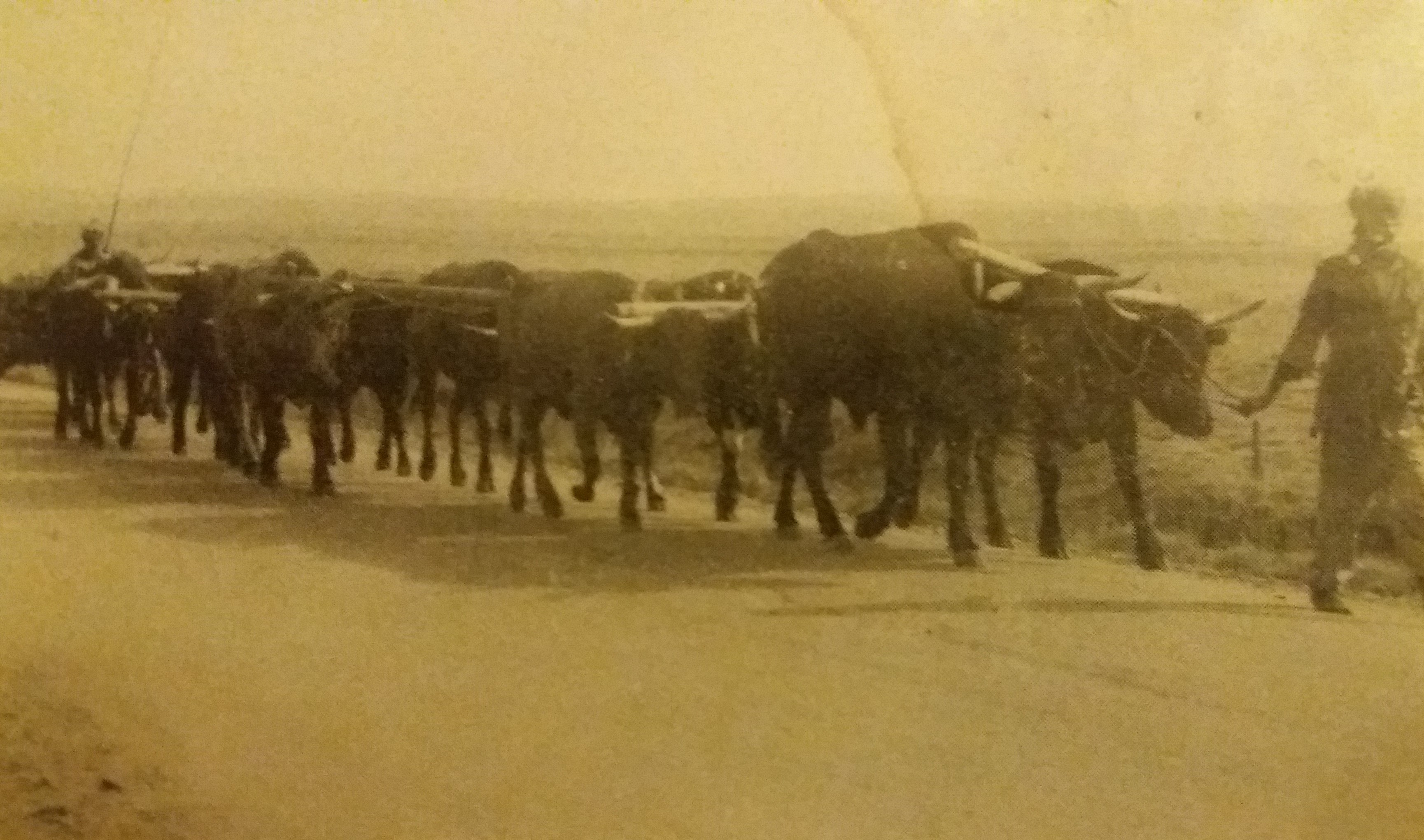 Then the mutual recriminations arose with Girven complaining that the rations were inedible or that Berry was not at home when the mule cart arrived at his house to collect the rations. In reply Berry accused Girven of allowing the convicts to stroll through his property when they should have been working. After a prolonged illness, Girven returned to work to be notified that his remuneration had been reduced to 2s 6d per diem. In a pique of rage, he peremptorily resigned. His successor, Fahy, did not last long. He was promptly dismissed some weeks later when he allowed two prisoners unescorted into the bush and they took the opportunity to achieve their freedom.

A Century of Progress. The Story of the Divisional Council of Port Elizabeth. 1856 – 1956 by J.J. Redgrave M.A. (1956, Nasionale Koerante Beperk, Port Elizabeth)

Port Elizabeth of Yore: A Family’s History through a Writing Desk

Port Elizabeth of Yore: The Berry’s – Father and Sons

Port Elizabeth of Yore: Outspans and Road Inns on the Inter-Town Roads of later 1800s